It feels like such a long time since I last wrote about a White Horse Trail walk [three months to the day] – and, in the time since, I’ve actually completed the final three walks in the series and the ninety-mile long trail itself! All will be revealed in good time.

This route was titled Walk No.3 but it was actually the fifth to appear on the group’s calendar, due to a bit of shuffling to incorporate it in to our annual ‘Mini Walking Festival’.

So, each year, a proportion of people from both age groups (at a guess, I’d say the average is fifty or more members) arrive at a location from which three walks will depart at the same time (each a different grade: 1 Boot, 2 Boot, 3 Boot). At the end, we all reconvene in the same spot and share a barbecue (everything is booked and paid for in advance).

Last year, it was the Forest of Dean; this year, we were destined for West Woods in Wiltshire. 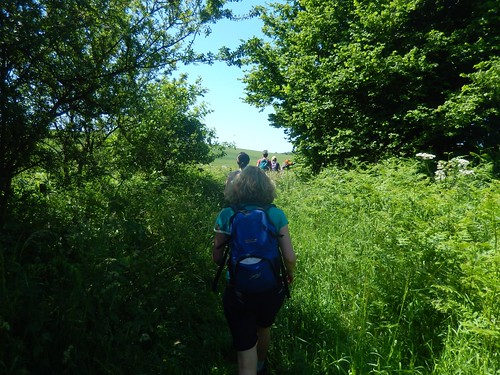 Our ‘3 Boot’ walk following the White Horse Trail set off in what I assume was a southerly direction and soon to link up with the Wansdyke Path… Before leaving the woods, we had to endure the challenge of overgrowth and then, there was the altercation with ‘The Horsey Man’.

Although this path seemed barely wide enough for two feet, we were following a public bridleway and he, along with his three horses and two (crying) children had every right to be there. But it was his manner that some of us took offense to:

He went on to explain that one of his horses was a bit wild and out of control (which may have explained the tears streaming down the face of one child). It was a long walk back in to the woods by this point and, while two of us sought a hiding place behind a tree, the rest stuck tight to the fence so that the parade could thankfully pass by without further incident.

There is an argument that such ‘dangerous animals’ shouldn’t have been out of public in the first place but I think that’s an irrelevant point to make when you’re already faced with a situation. Trying to see things from the man’s point of view [as I think the US should attempt with North Korea…], he would’ve been under a lot of stress before realising there was half-a-dozen of us (and one dog) walking towards him. 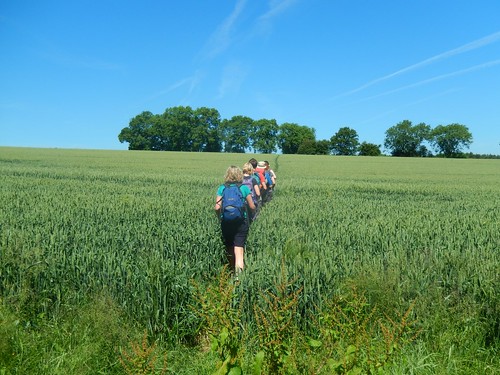 Temperatures on this day were forecast at around 26°C. At one point, Matt had a look on his GPS device and I believe it had recorded 32°C! Already, we were feeling it. 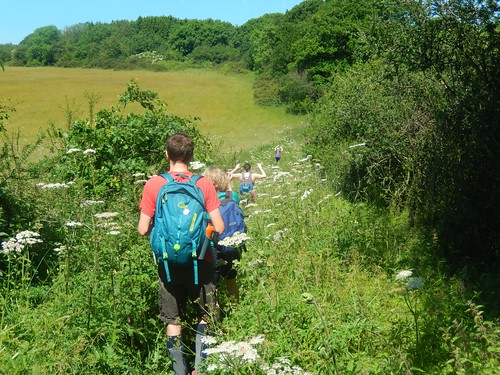 We’d hope to have overcome our main ordeal for the day but that wasn’t to be, as the ‘overgrowth’ theme that has plagued just about every White Horse walk so far remained true to this outing. 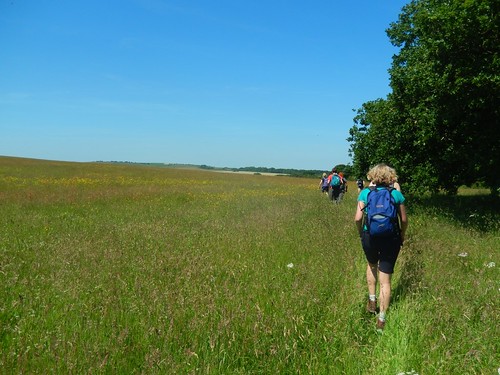 There was one path that we avoided altogether, where the vegetation was our to our shoulders and with no suggestion of a way through. Instead, we clambered over a gate and followed the boundary across private land and it paid off. 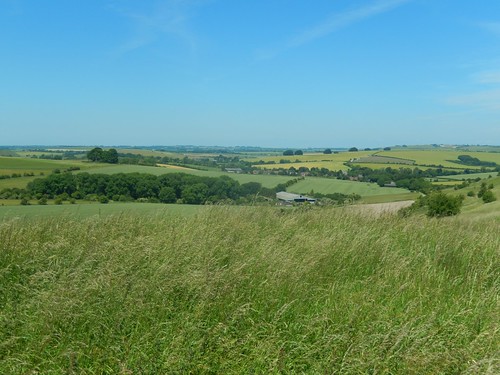 While the views were lovely throughout the walk, one thing I cannot highlight in any photograph is the terror these hungry insects provided. Almost everywhere we walked; they were swarming and ready to bite! Some of us got bitten worse than others while I found they were somewhat immune to insect spray; going as far as to bite me through the sides of my T-shirt!

Midges can be a pain but, in my experience, they usually pause at polyester! 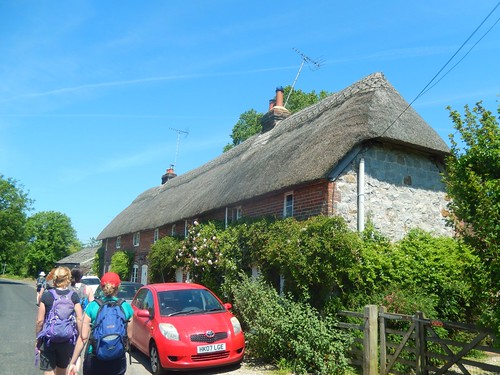 Further on, lunch time was near and we had made our way to the village of East Kennett – not far from Avebury and The Ridgeway. Like West Kennet, the eastern village does have its own long barrow but it resides on private land and isn’t nearly as accessible. 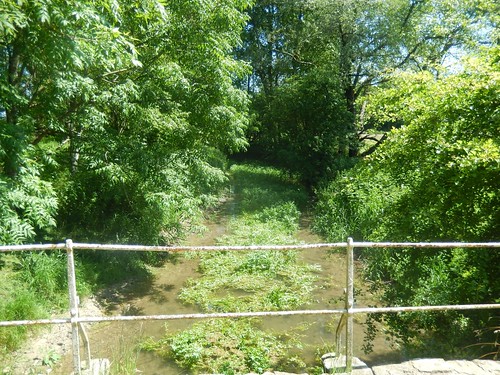 We crossed over what I believe was the River Kennett – offering shade but no respite from the warmth – before stopping at The Sanctuary: 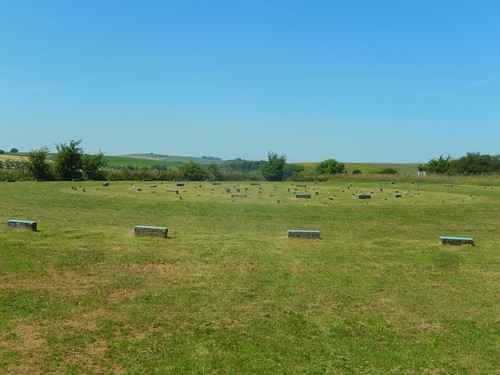 This is one of several historic sites within the local area. 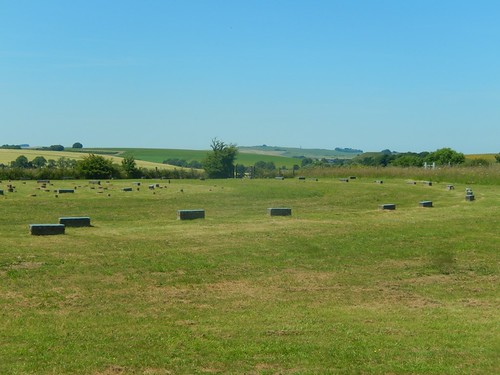 You have to use your imagination, with help from the nearby information boards, to imagine each wooden block as a standing stone or column. 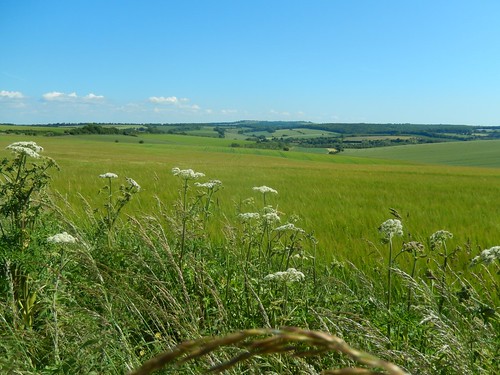 We sat down to have our lunch on the south side of the enclosure; barely shaded by a hedge, before crossing the A4 to the start of The Ridgeway; an historic track and byway (not pictured) that gradually climbs Overton Down with vocal travellers set up on either side.

Jo warned me that the first thirty-miles of The Ridgeway are very much like this (with less travellers, perhaps). It doesn’t sound easy or inviting but I’ll be doing the majority of it on my first day. 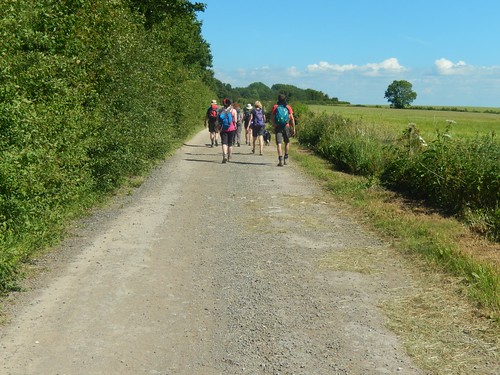 Before reaching Hackpen Hill (the start point of Walk #2), we left The Ridgeway to continue along the White Horse Trail across the Marlborough Downs. I remember sitting down on a fallen tree in the woods, where we could almost allow our bodies to stop sweating for a few minutes. 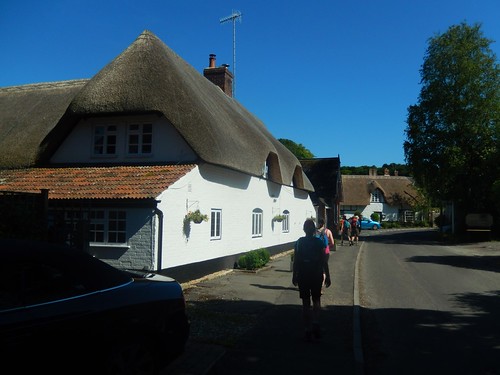 We were effectively in the parish of Marlborough by now, meaning we weren’t far from the end. With liquids running low and the desire for a proper cold drink ahead of the barbecue, we stopped at a nearby pub – I’d like to say it was The Outside Chance in Manton but I can’t be sure. Either way, it was refreshing and the lady behind the bar was kind enough to refill our water bottles as well. 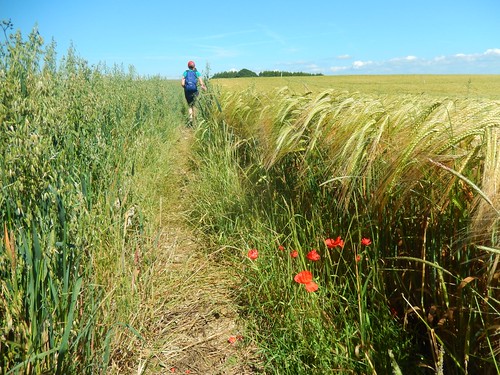 It was hard to get going again, with the sun still beating down hard outside. But, if we didn’t attempt to finish this walk soon, we might never make it. Plus, there was going to be a barbecue. 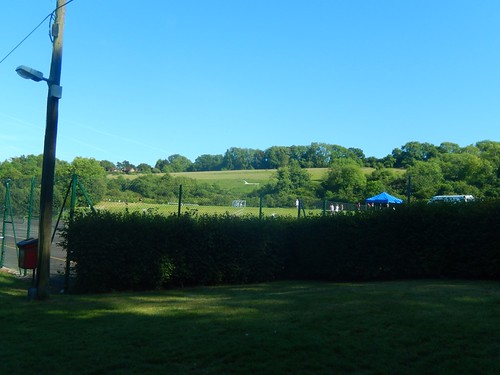 Somewhat refreshed, we plodded on towards Preshute Hill – or at least, the road beneath the sports ground so that we could peer across to it, through the tennis court. 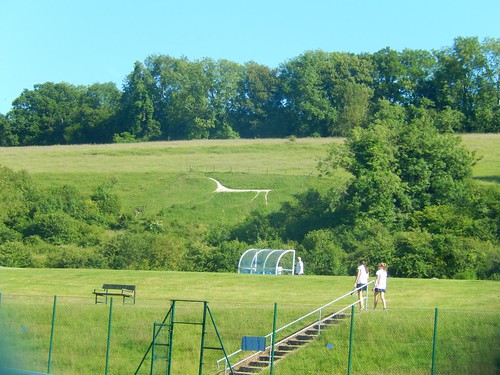 This is the Marlborough White Horse.

A very stick-like image of a chalk figure and maybe not unlike the Uffington White Horse, which we’ve yet to see. I likened it to something drawn by Picasso… 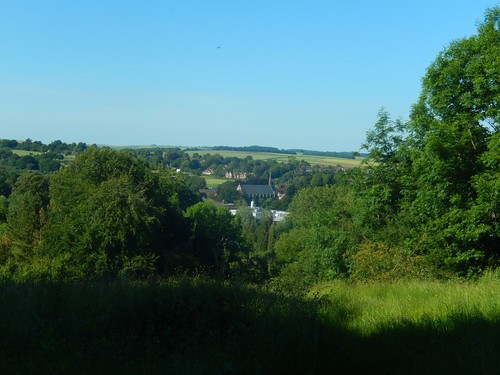 Our path climbed as we headed towards woodland once more. Sadly, not West Woods, as we looked down over the village-sized college campus below. 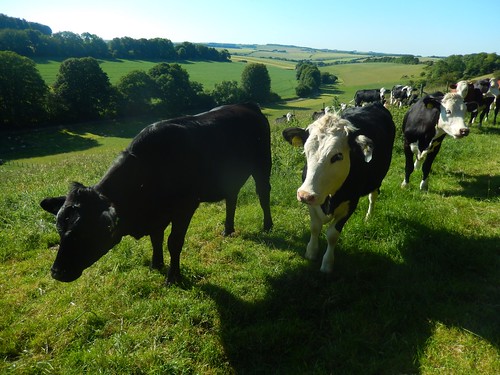 During our final descent towards Clatford Bottom, we almost had an incident with a young-adult herd of cattle, who only proceeded to chase after us once we’d conquered the knee-high stile that led us to the road. From there, it was up the rocky track in to the woods and a welcome time to sit down, eat and hear of other people’s suffering with horseflies.

We were supposed to walk only nineteen miles, I believe. But, with the occasional and necessary detour, we conquered a bit more…

Distance of this walk: 23 miles