My most ‘challenging’ walk-leading experience to date! Up on the Black Mountains of Wales, knee-deep in snow with winds of up to 40mph blasting us from the north-west.

Precisely one year to the date of when I first did this walk on my own, I’d arranged to lead the walking group around the same course, in the run-up to Christmas.

Heavy snow had breached the heights of South Wales one week earlier… My only concern that morning was the risk of icy roads and winds up to 40mph… All the snow would be gone by now, right? 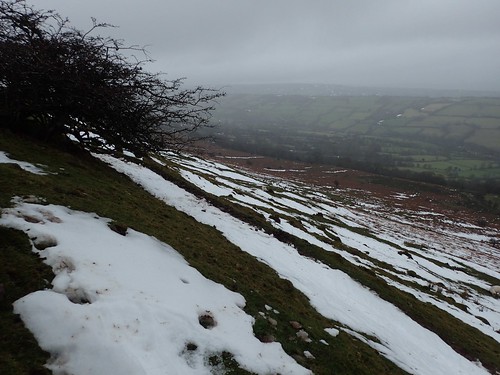 I made an effort through the walking group’s Facebook page to try and deter people with weather warnings, the day before. As well as being very windy, it was likely to turn wet after lunch. As there were no warnings of ice on the travel reports, I decided to go ahead, in the hope that very few would turn up…

As we made our way over the Severn Bridge and on towards Hereford, there was a distinct absence of snow, lower down. So far, so good! As we neared the Black Mountains, we could see the white tops of every hill. i assumed this would be nothing more than a covering of two or three inches at most. 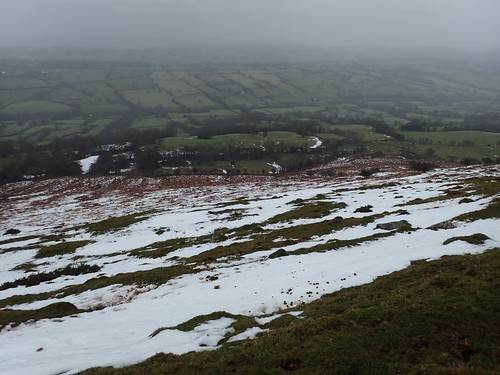 Spread between three cars, we nabbed the last remaining spaces at the Black Hill picnic site car park (SO 288 328). It really isn’t very big and one of the reasons I’ve not attempted this walk in the summer is because I fear I’d turn up to find it would be full. Before we even opened the car doors, it was raining. Waterproofs and gaiters on; we were wrapping on before beginning the immediate ascent before us. 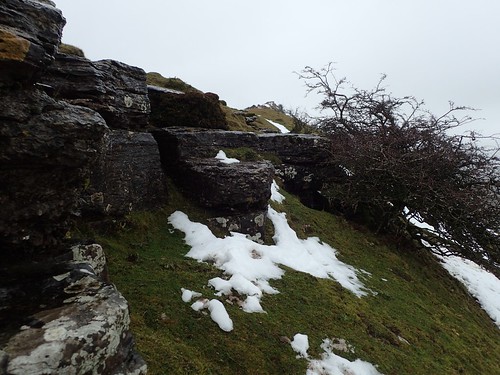 We could see where a few others had gone before us but the going was far from easy. I was in it, knee-deep, with every ardous step. Even as we reached the ridge of the Black Hill, this challenge continued. We sought immediate shelter on the east side of the ridge for a brief bite to eat, before pressing on towards the trig point (not photographed, on this occassion). 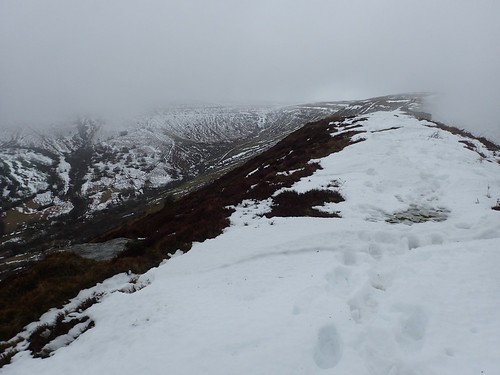 Incidentally, Black Hill (at 640m) is the highest point in southern England, despite the fact it lies very close to the Welsh border and in Herefordshire. Some people otherwise believe that High Wilhays on Dartmoor (621m above sea level) claims the title.

Beyond the trig, we would cross a typically Welsh mountain top landscape of… Peat bog! 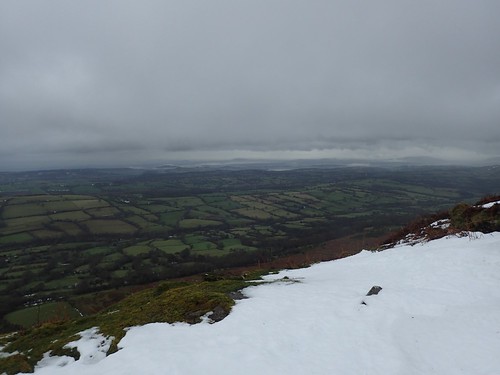 Only, it couldn’t be seen beneath our feet. There was no sign of the path that I had trusted on previous visits. Although it was possibly to navigate visually, crossing beyond the head of the Olchon Valley; I had so much swirling on inside my own head that it didn’t go as smoothly as I would’ve liked.

Throughout the walk, I lost my footing on several occasions, thanks to the 40mph gusts and I think it was the same for just about every one of us. While some steps were deep, some would every now and then fall deeper. I was playing host to a raging battle inside my own mind; regretful, in a deep belief that I should’ve cancelled the walk and that I was putting others at risk. What were they going to think of me, by the time I allowed them to catch up?! 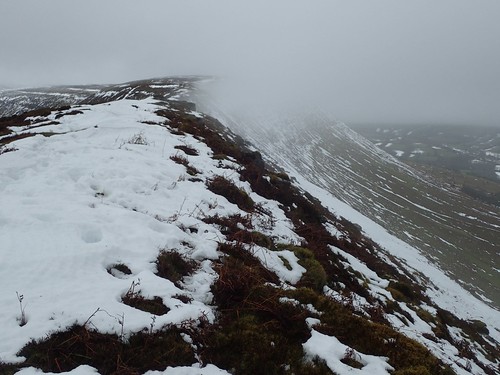 Even in poor visibility, as we rounded the head of the valley, I knew there was a choice to make. Following the intended route back along Offa’s Dyke was out of the question… We were only a few hundred metres from the Hay Bluff trig (677m – the highest point on this route), while the sensible option would’ve been to turn left and duck immediately down in to the shelter of the valley…

I pushed on; determined to capture the photo above! Driven to see us all reach the high point without uttering a word! We did pass a woman and her dog, who tried to say something to me but, I couldn’t hear a word in this wind. The familiar limestone walkway that crosses the bog was slick with ice, when it became visible beneath the snow.

We did begin to retrace our steps from the trig pillar and I owe many thanks to Mike for his assistance in navigation and reassurance, as I reached a point of near-panic where I froze (not literally, although it was cold), in deep hesitation over the untested way forward (Mike knew the area quite well). 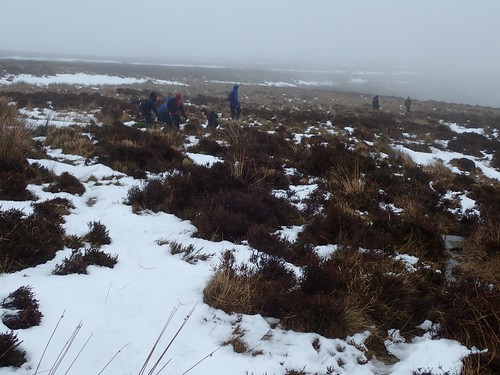 I don’t have any confidence in my ability to raise my voice and be heard, when there’s even the slightest of sounds to be heard. Whether it’s a passing car, a bang on the door or north-easterly breeze. I cannot tell you how relieved I felt to descend in to the Olchon Valley.

Surprisingly, we were still exposed to a portion of the wind, where I’d anticipated it would drop out completely. At the request of several members, we endured a brief but overdue lunch break minutes before beginning our descent. 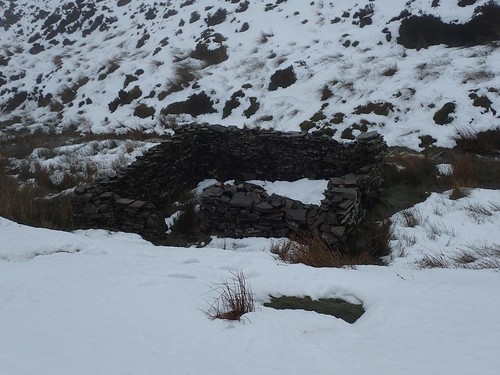 Ironically, a wind shelter was one of the first sights I spotted, following the path beside the brook! 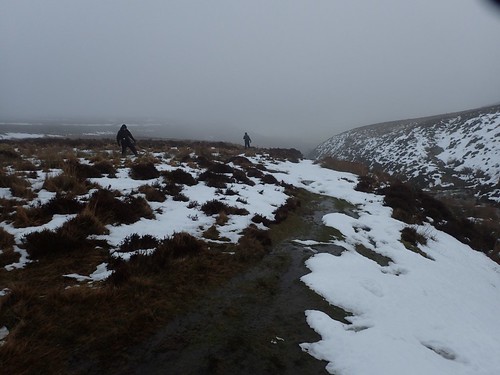 In a mix of part-panic and lack of direction on my part, as the leader; half the group sauntered on but away from the right of way, which did become more apparant as we continued to sacrifice heigh above sea level, in the aim of returning to the cars. 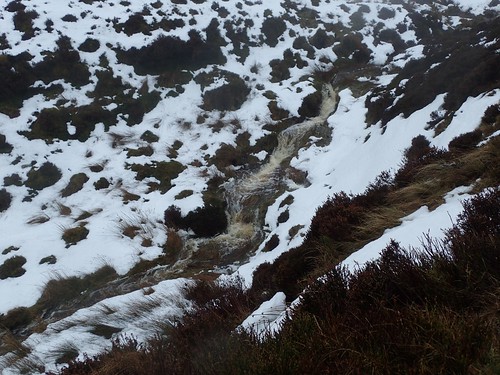 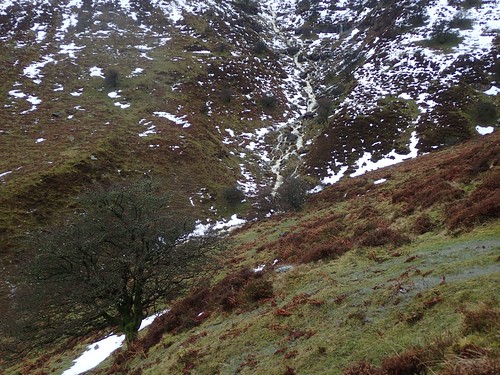 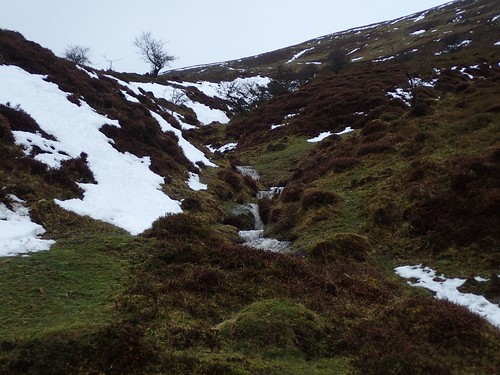 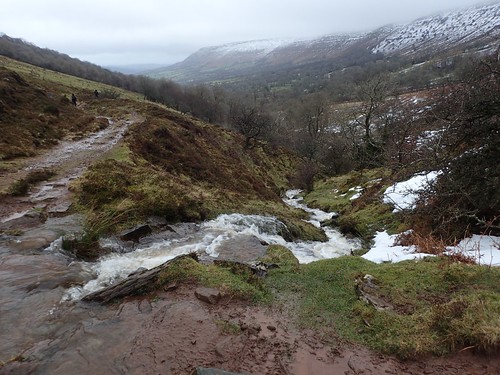 I began to calm and relax, in spite of the fact that I hadn’t walked this path before. I allowed others to walk on, as I became more activie with my camera and open to the sounds of water; gushing down the hillsides from all around us. 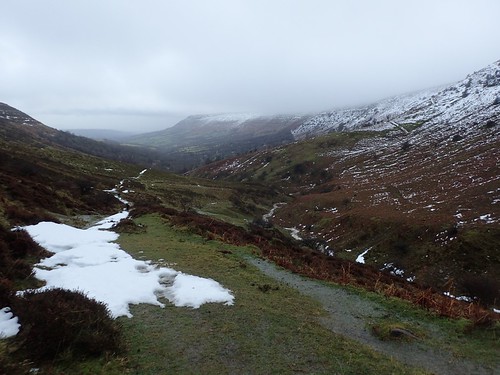 What a sight to behold: the Olchon Valley. 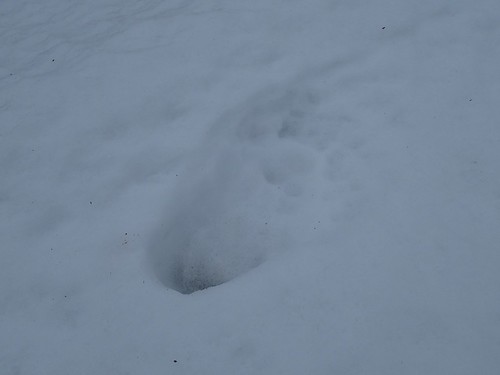 We would all regroup before I noticed a series of very large footprings in the snow… Clearly defined toes and imprints but around twice the size of my own UK 10½ sized boots! 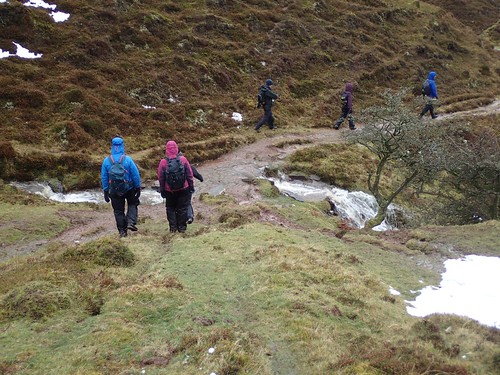 From the depths of snow, our walk transpired to cross slick and slippey mud before we’d reach the road that swings around this valley. From the road, we’d turn left and take a direct route back to the car. Had we gone right instead, we could’ve then looked to cross the Olchon Brook – which, I imagine, would’ve risen quite high – but, that would’ve meant an unecessary ascent after a day of hardship on the hills. 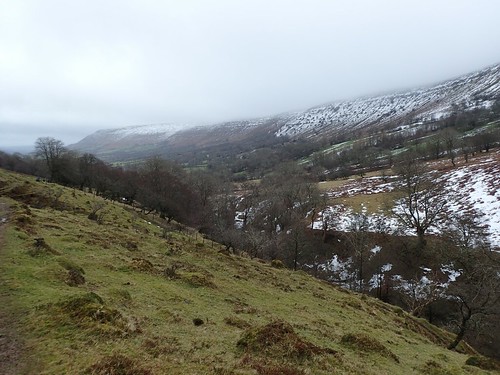 Post-walk. we drove on through Longtown and stopped at the Old Pandy Inn ahead of the final drive back to Bristol. Everyone I spoke to seemed to have enjoyed the walk sufficiently. Several have encouraged me to repeat the walk in better weather! 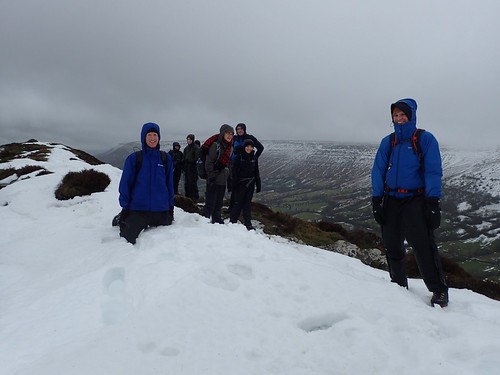 For me personally, this was by far my most ‘traumatic’ experience as a walk leader. Psychologically, I was unprepared going in to it. Next time I find myself in a similar situation, I will probably play it safe and cancel the walk ahead of time. I haven’t actually walked with or seen anyone from the group since this day… I look forward to changing that soon.

One thought on “Knee-Deep on Crib Y Garth”