One week prior to this walk, Britain was again battered by the Siberian ‘Beast’, which delayed the event of what would become and enjoyable and dry day down on the Quantock Hills.

This was Jenny’s second walk-leading experience of the month – the first of which was also postponed due to snow. We’d start from the free village car park in Crowcombe, beneath the western edge of the hills. 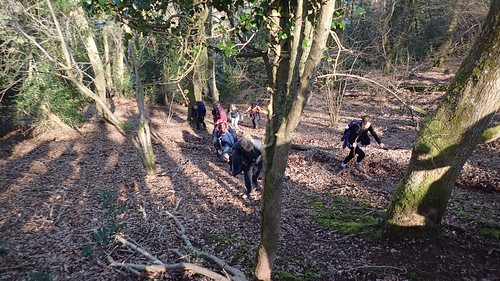 As I live a good twelve-miles south of Bristol and the car-share meeting point, I’d decided to complete the one-hour journey southwards on my own and would link up with the rest of the group from there.

Without wasting any time, we were heading steeply uphill, after filling any free parking bays! From the tarmac way, we’d then follow the contour of the hill (with some relief) from Little Quantock Farm. I took the first photo in this series from Triscombe, on what was probably the most calf-bursting ascent of the day! 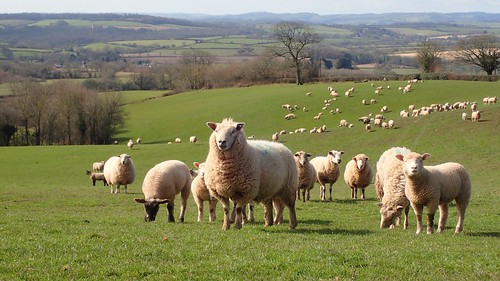 In a south-eastward direction, we continued along the MacMillan Way West, heading towards West Bagborough. It’s a route I know well although, I’m normally walking it in the opposite direction (my memory suggests this also follows the Quantock Greenway South – which, bizarrely, doesn’t feature on Ordnance Survey maps). 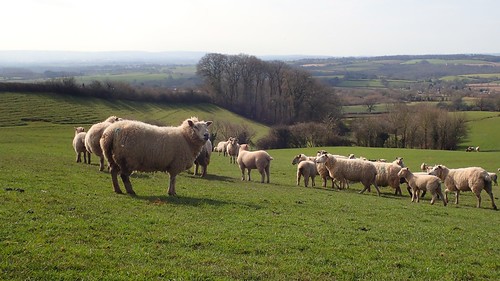 We sat down in a field beside Rock Farm. One by one, these bleating bundles of wool began to encircle us! Was it feeding time? Only for the flock clad in Gore-Tex and breathable layers.

I often find sheep can be ‘alarmed’ at this time of year. Sometimes, it’s related to lambing season but I also believe they’ve just been released to graze outdoors for the very first time and they’re wary or expectant of any bipedal presence within their property. 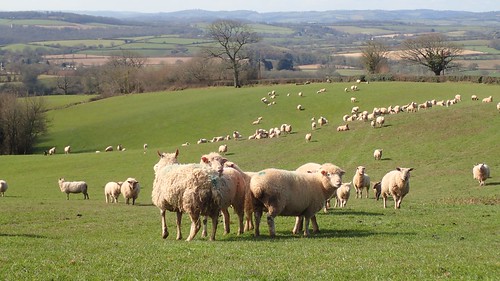 If only they didn’t have to poo on every spare inch of land, we may have found easier options for sitting down. 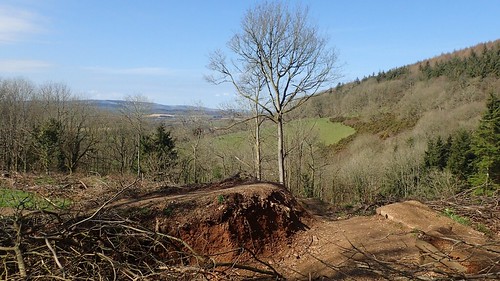 Our route took us along the road and through the village of West Bagborough; passing the fragrance of a Sunday Lunch at the local pub. Those of us who’d read the walk description carefully knew there was still one climb to come before we could eat…

Those of us who’d been on one of Jenny’s walks before also knew that it wasn’t going to be easy! 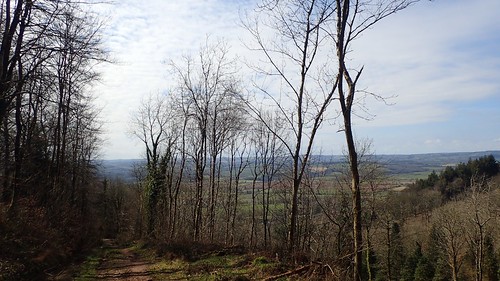 Cothelstone Hill. A summit I’ve conquered a number of times on my own and a personal favourite, in spite of the fact its somewhat separated from the greater mass of Quantock mounds further north. 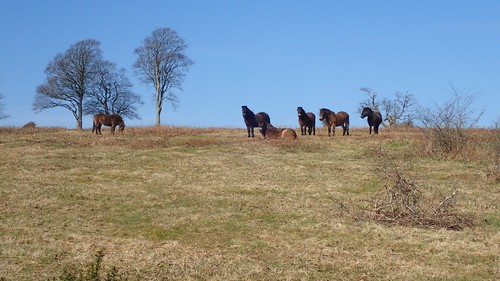 We left the MacMillan Way West at Cothelstone village church, before beginning our long ascent from the road corner near Badger Copse. ‘I’d never been this way before’, I said to myself. But, looking at my map now, I can see that I had… Only, it was much different now… With fewer trees bordering the bridleway and volunteers (presumably) working on the construction of mountain bike tracks. 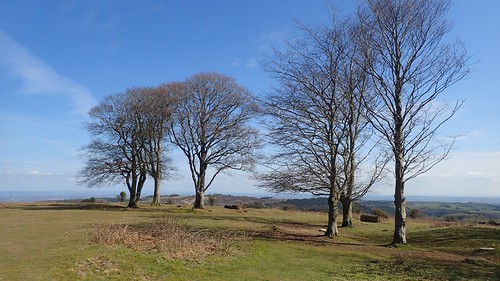 I usually approach the summit of Cothelstone Hill from an entirely different direction. Even though it is often a popular spot for all walkers, there were relatively few other people about, considering the sun was out. 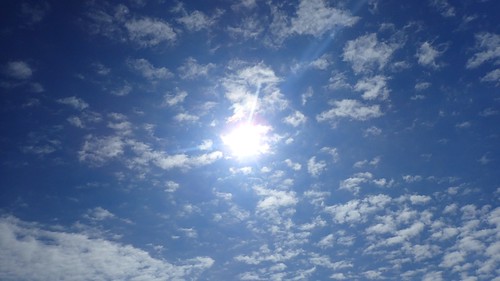 It was still a little bit chilly but it was undoubtedly the most beautiful day we had seen for a long time. 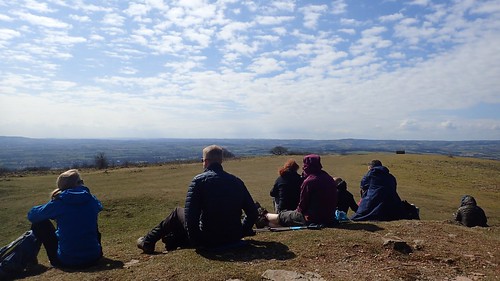 There’s a tumulus just west of the official tree-topped summit and it was upon and surrounding this mound where we would rest for lunch. Most of us took in a view towards the south; away from the Siberian breeze and, more importantly, the atrocity that is Hinkley Point C. 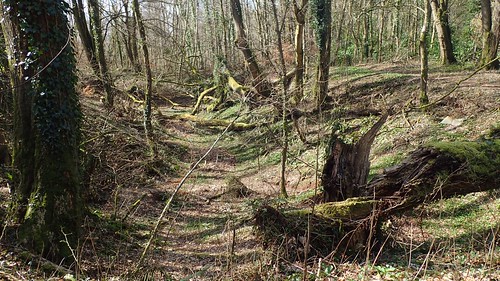 After lunch, we’d take a steep and wooded descent northwards to the road junction at Park End. From there, we could follow the tarmac up to Lydeard Hill. 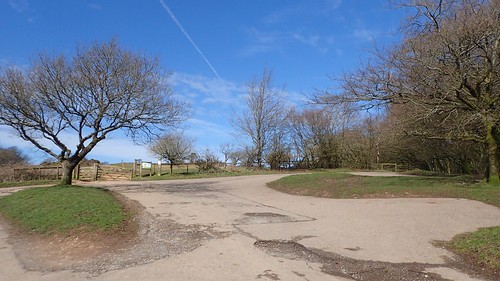 This car park is usually overflowing on a weekend. Yet, here we were without not even a bicycle in view… 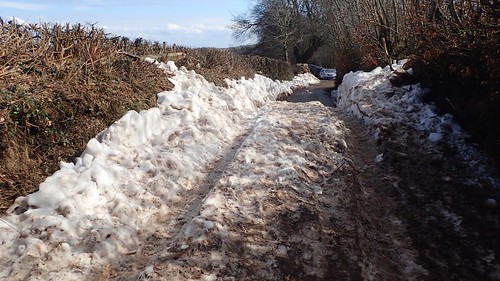 More than a dozen cars had been abandoned at the Birches Corner road junction. You’d think more people in rural Somerset would own four-wheel drive vehicles… 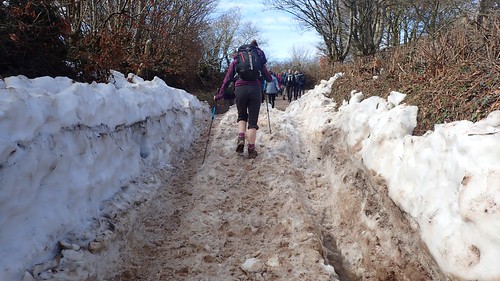 Maybe they just didn’t want to risk get their tyres wet. 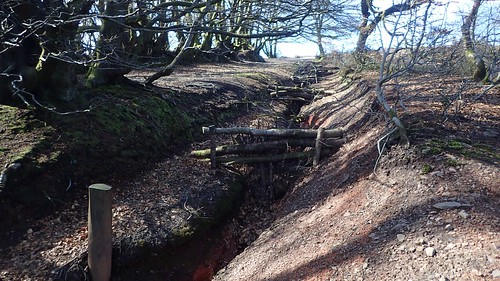 Beyond our sole sighting of snow, we marched on across Lydeard Hill. At the far end, where we’d leave the woods to break out on to moorland, we found evidence of a flood-relief or drainage channel that had been created months earlier.

When I previously visited the Quantock Hills (December 2017, with a few inches of snow covering the high ground), I’d read about the word that was being done here. 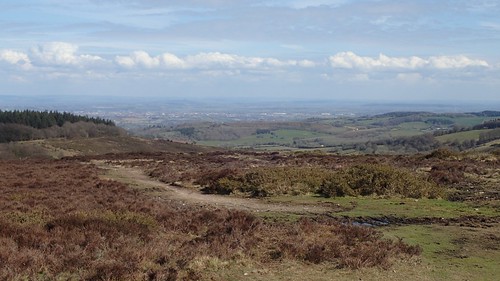 We were now destined for Wills Neck; the highest point in the Quantocks and one of the highest peaks in Somerset. You’d be forgiven for thinking it was No.1 – a title that belongs to Dunkery Beacon, further west on Exmoor – as the views surrounding the trig point are panoramic and superb. 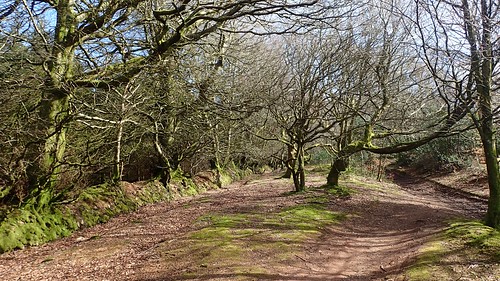 We’d make our way back towards Crowcombe via the ancient drove road above Triscombe and running beside Great Hill.

One final descent along Little Quantock Combe would see us return to our cars, via the farm we had passed earlier in the day. 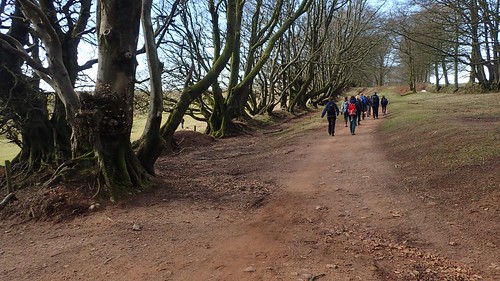 I swear, there’s no such thing as a bad walk on the Quantocks!

Distance of this walk: 11 miles