Before the ‘Lockdown’ and mass-panic really kicked off, I treated myself to a pair of new walking boots, the Meindl Meran GTX. A couple of weeks later and I wasted no time in adding a new pair of trail shoes to my collection, after spying a bargain on eBay.

In this post, I’ll be sharing what I purchased and why.

This story begins in early December, when I originally placed my order…

I drove across Bristol to visit Go Outdoors, having seen that they had one pair of these boots available in my size. In the store, I sat patiently, waiting for the lady to bring them out. I tried the left boot on and all was fine. But when I came to slip my right foot in to the other, I felt something interfering with my toes.

To me, it felt as though the toe-end of the removable insole was riding up inside of the boot. I figured that I could pull it out and reinsert more carefully… As I did this, however, I found that it was an insole for a left-boot!

In short: they wouldn’t let me have this ‘dysfunctional’ pair and Go Outdoors don’t stock the Meindl insoles for an immediate swap. Anyhow, I could order them at the till or online and get them delivered to home (which would save taking another trip).

While making this purchase, I made a Price Match claim, where Go Outdoors will beat any competitive price by 10%, if you provide the details. So, where these boots should’ve cost me £170, I paid only… £152! They would then be delivered two days later and in plenty of time for the next weekend.

I was in work that day but found an e-mail on my phone from Hermes to say that the boots had been delivered and left in a ‘safe place’… I had not been in contact with the driver who given them permission to do this. Go Outdoors clearly state that all orders must be signed for. This driver had photographed the closed door of a communal and unlocked cupboard that’s accessible to anyone entering this block of twelve flats. 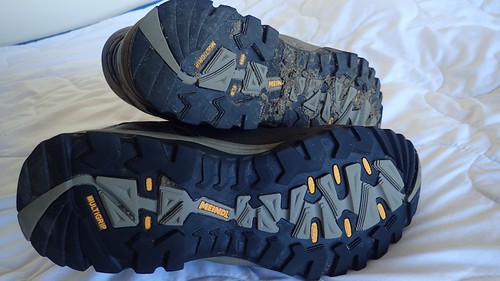 I arrived home from work in anticipation, to find NOTHING waiting for me behind the door. In my letterbox, the driver had left a card with the word ‘CUPBOARD’ written on one side. No contact details. Nobody had seen my parcel. I even checked the bins outside. Someone had swiped it and I immediately launched a claim with Go Outdoors – who, in fairness, were very supportive. This was then taken on my JD Sports (the parent company) and handed over to an investigations team who would liaise with Hermes.

For whatever reason, I didn’t receive my refund until early March. I would’ve been satisfied with another pair of boots but, when I came to place my order again, I managed to get the price down to £143, saving a little bit more!

Why Did I Buy Them? Twice!

Firstly, I wanted another pair of leather boots after my three-year old Berghaus boots had given up. I’d heard very good things about Meindl as a company and, these days, I’m leaning towards an almost-Barefoot trend with my footwear. 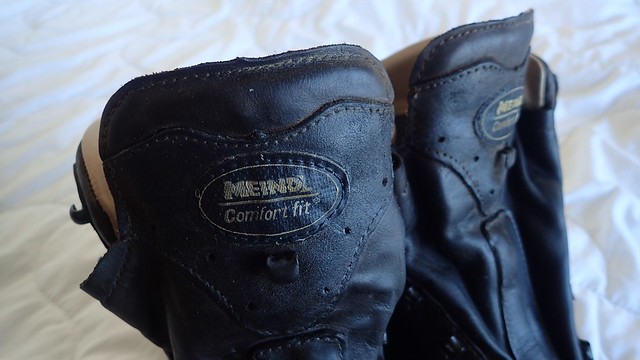 I like the idea of a design that is more naturally foot-shaped and not pointed in a very toe-restricting manner. These don’t have the ‘zero-drop’ of a truly Barefoot shoe but their Comfort Fit creates a wider toe-box within which your toes can spread as they should intend to. 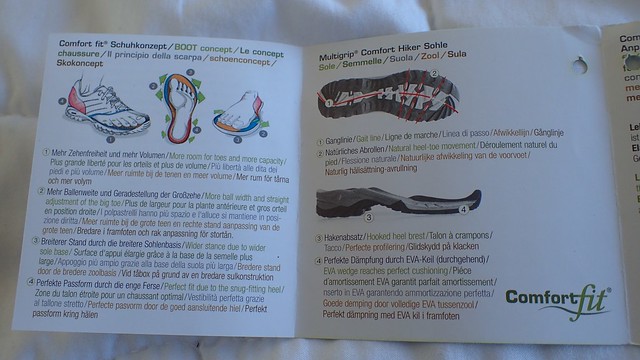 A lot of people and even retailers believe that Meindl shoes are simply “for people with wide feet”. But if you read in to the details, you’ll realise that they refer to Barefoot traits, such as allowing the big toe to straighten and not point inwards. Trying them on in store, I was pleased to find that the Meran GTX boots grip my narrow ankles quite well at the rear. It’s possible I’ll have to concede that they are a bit too wide for me in other areas – but only time will tell.

I have slightly narrow feet and any retailer would normally recommend a pair of Scarpa or Salomon boots to me for this reason. I’ve been wearing Salomons since 2015 and, as comfortable and cushioned as they can be, I’m always aware that my toes feel a bit too confined.

They’ve been out on two ten-mile walks so far (one was incredibly wet, the other bone dry) and I’ve yet to suffer any blisters or discomfort.

Nobody really knows what’s going to happen over the next few months. I’d made plans and you probably had as well. In December/January, I was refunded for a pair of eighteen-month old Columbia trail shoes that were falling apart within the warranty period. With a lot of free time now on my hands, I wanted some lighter weight trail shoes that I could wear across the local fields and footpaths, where I don’t often need boots with full ankle-support. 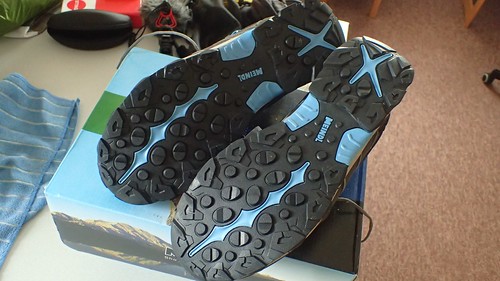 Looking again at the options from Meindl, I eventually settled upon the Activo GTX trail shoes. Again, they bear the Comfort Fit design of the Meran boots and they appear to offer greater traction under foot that some of the other popular models. 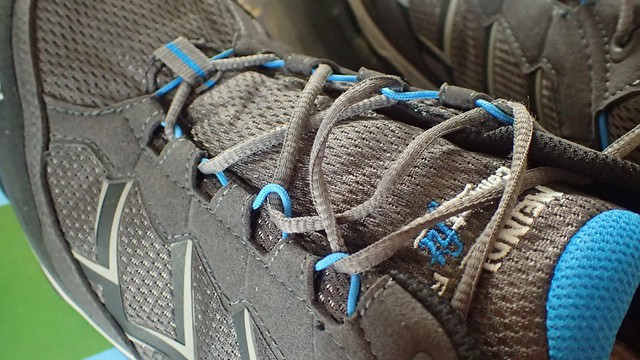 I’m intrigued by the lacing system, as the laces themselves are quite thin and I’m not usually a fan of this. But the blue loops are formed by another blue laces that runs around the forefoot. As you tighten the laces and pull all of this together, it secures the shoe to your foot in a way that many other models will not.

Just in case you were wondering: I do fit volume reducers (under the removable insoles) on both sets of footwear, due to my ‘low-volume’ feet. Meindl shoes are more spacious that Salomon. 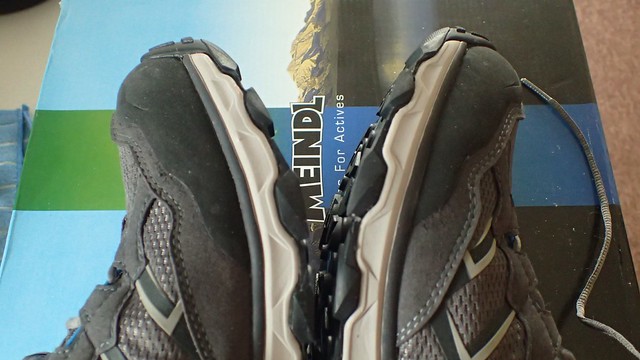 What’s really interesting about the design of the Activo shoes is that they do not ‘fold’ where the toes bend – a common failure point of everything my feet have worn. This is because the toe is given a more pronounced and ‘bent upward’ shape underneath. So, your foot still rocks through the heel-to-toe motion but your footwear should not suffer.

I’m a little bit concerned that I’ve again bought “fabric” shoes with lots of stitching, as opposed to one slab of leather. I was prepared to pay £120 but found a seller offering them for only £70 on eBay, brand new. I’ll only be wearing through the dryer months and, at that price, it they do fail to see me through two years of walking, I won’t lose any sleep. They’re doing just fine in my daily three-mile circuits.

Comments and questions are always welcome.