For the fourth consecutive year, I’ve completed the thirty-mile route of the Mendip Challenge, which is an annual fundraising and challenge event organised by and in support of Weston Hospicecare. 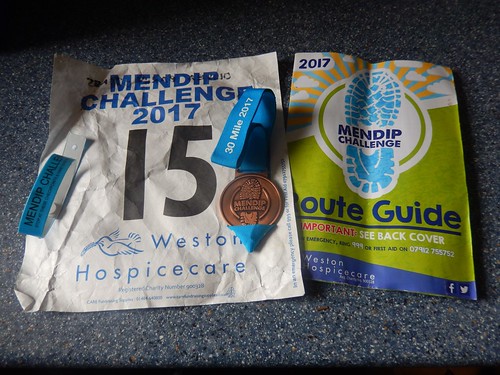 These days, I mostly do it for the challenge and for the feeling or participation. A couple of friends also take part each year. A well organised event that always justifies taking the Monday off work!

As you can tell from my bib number, I got in quite early with the registration for this event – before it was broadly announced. I think I was No.11 two years ago but this year, I noticed other bib numbers in excess of 1200! 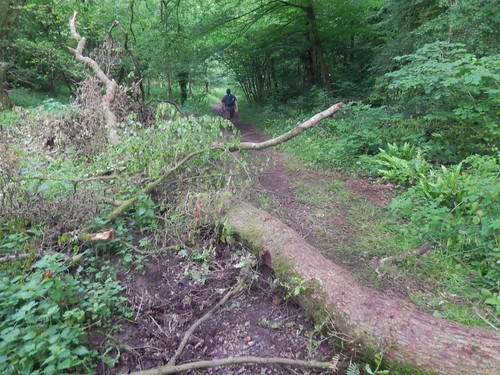 This route largely follows the West Mendip Way where, towards the end of 2016, a team of volunteers set about replacing all the old waymarks with fresh blue ones.

Starting from the centre of Wells, the route continues up through Wookey Hole en route to Ebbor Gorge. But, in actual fact, the Mendip Challenge route doesn’t perfectly follow the West Mendip Way here, with some allowance for a ‘more direct’ and accessible walk, particularly during wet weather.

I was surprised to find this fallen tree in Ebbor Gorge, as it wasn’t there two months ago when I walked through here in the opposite direction with a friend. But the steps climbing up to the hillside are no surprise. Feared by many and one of the most challenging ascents of the day. 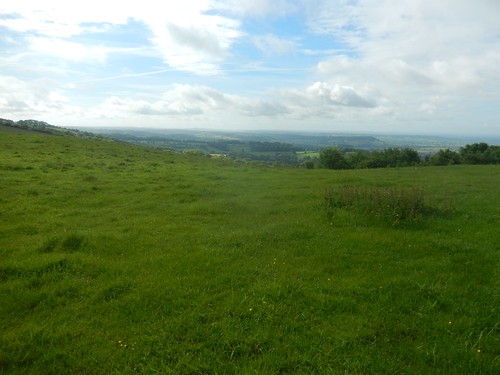 As always, such exertion is rewarded by the views from the top. 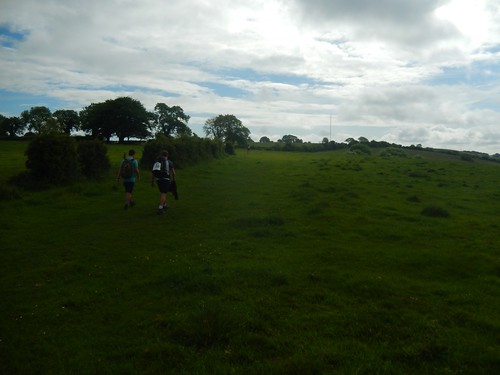 But you don’t have to walk thirty-miles to take part. Some walk twenty or even ten miles; each with their own start point and times. We all finish at the same place. Please note that the start point for the twenty-mile walk has changed as of this year. 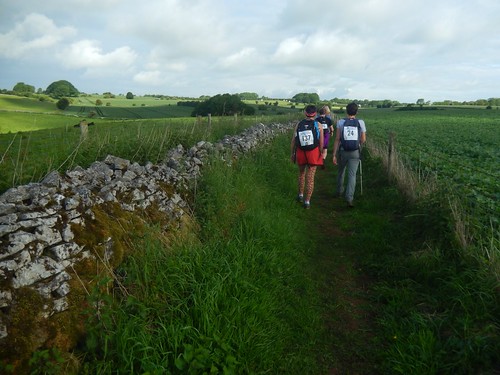 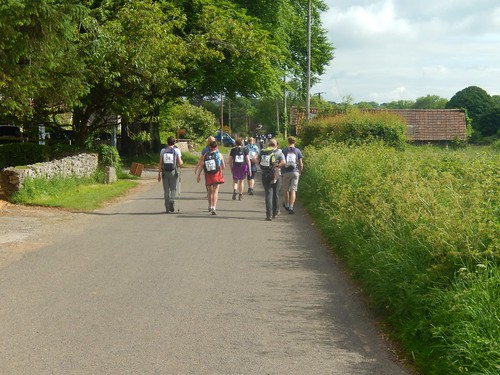 Walking too and from Priddy is a fairly easy route and, dare I say it; one of the most straightforward stretches of the entire length. 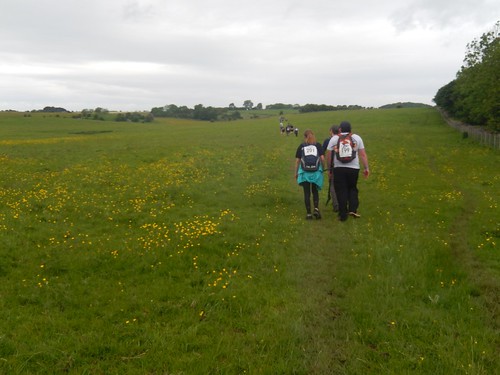 Clouds were beginning to gather overheard. It must’ve been 10am by this time and, in spite of the forecast, there wasn’t as yet a single drop to be felt. 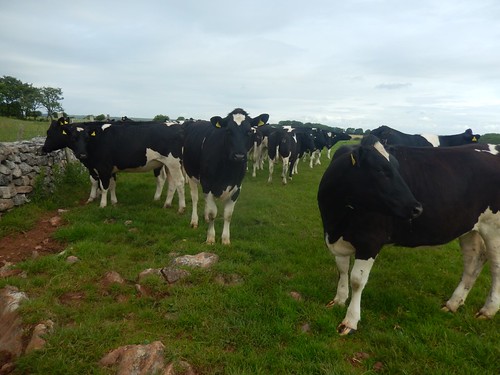 Walking west from Priddy, with the villages of Westbury-sub-Mendip and Rodney Stoke beneath us, we would encounter curious cattle in one of each of four successive fields… They were a feature of my first two years walking this route but I cannot recall seeing even a single cow through here in 2016. 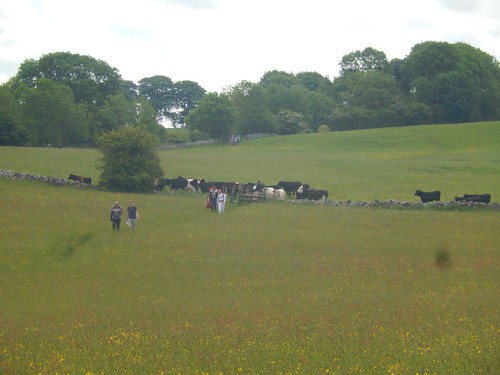 As a group of us clambered over one stone stile, the cows moved in to close off the gap. But it looks as though Thor and DangerMouse were able to make it through. I cannot speak for Deadpool, looking at this photo but, he did reappear at the finish. 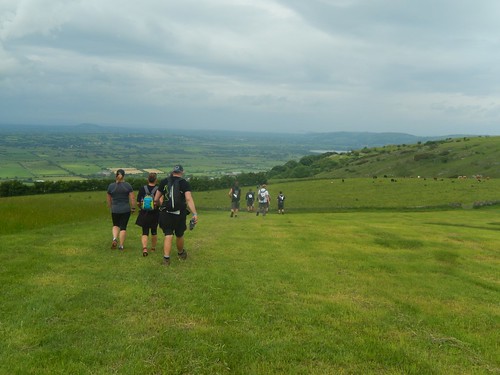 Eventually, we began to descend towards Rodney Stoke and anyone who’s walked this route before will know what awaits beyond the checkpoint in Draycott… 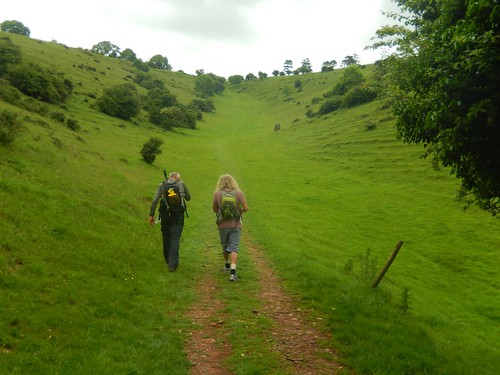 Looking at a track worn in to the grass, it appears as though some (possibly the runners) and still walking straight up the valley, while the right of way turns right at a large boundary stone (complete with waymark) and then climbs up the hillside, crossing the top of the valley to reach a gate beyond a false summit in the top corner (with another climb beyond that). 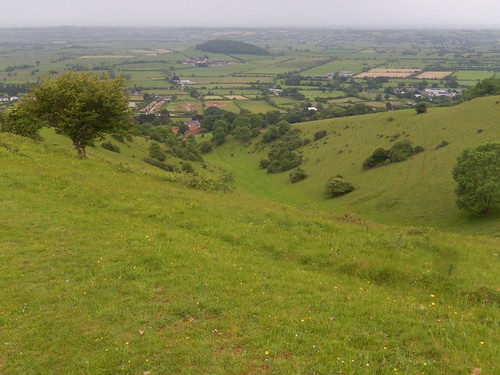 I’m very pleased to say that, for the first time, I did this without stopping for breath! Don’t get me wrong; I was very tired. But, I think the combination of two walking sticks and electrolyte tablets in my water greatly helped.

There is a method to actually walking with two poles, where I had only previously used one for assistance and support. One couple referred to me as four-legged, before I would overtake them for a second time. 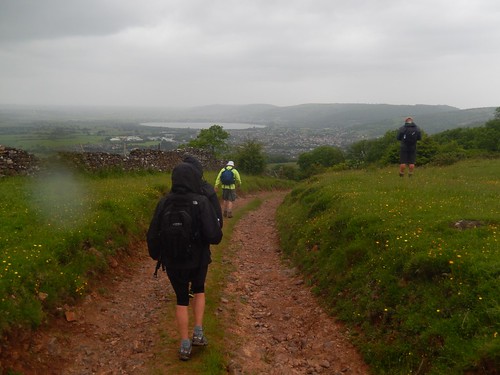 From a height of around 200m above sea level, the route then descends slightly towards Cheddar. Beyond that, another long climb awaits up to and across Bubwith Acres Nature Reserve, before descending down to the road running through Cheddar Gorge.

Close to Bradley Cross, I did notice a West Mendip Way marker directing people left and down the hill… It looks like an error on the installer’s part but the supplied route guide for the Mendip Challenge accounts for this. I’ll try to mention it to the Mendip Hills AONB team. 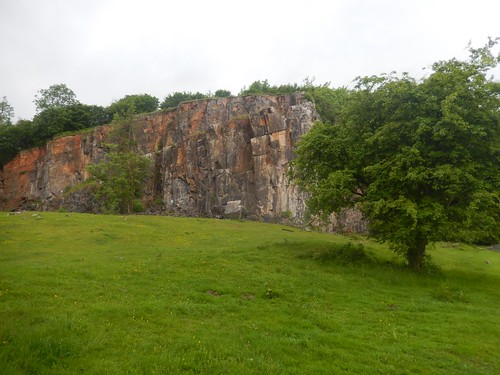 So, I’d managed to climb Batcombe Hollow before the rain began to fall at 11.00. From then on, up through Bubwith Acres and down to cross Cheddar Gorge, it was persistent. Worst of all, I’d unintentionally left my coat at home. Worse still: I’d also forgotten my banana. 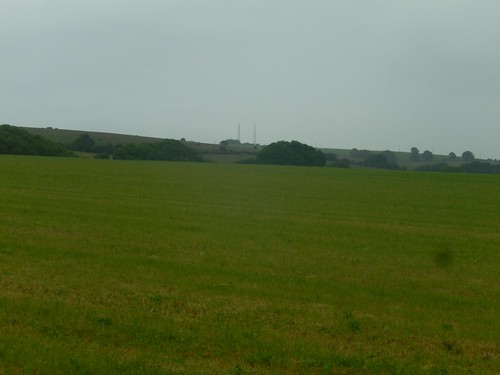 From Black Rock onwards is a very well know route for me; soon climbing up past Long Wood, Charterhouse and walking towards Rowberrow, via the next checkpoint. Lunchtime was on the horizon with no blue sky in sight. 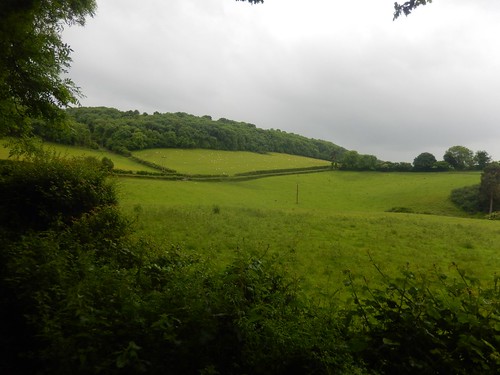 I always think that Shipham makes for an ideal lunch stop on the thirty-mile route. It is about halfway, there’s a checkpoint with water and snacks, if you get there at the right time, a bench may be free…

But still, it was raining and, last year, I remember it being too hot. I’m always seeking shade by this point, it seems. 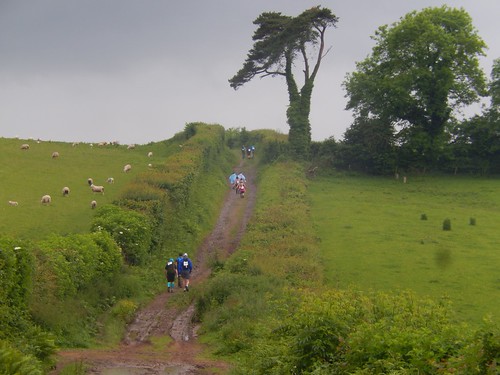 So, I decided I would plod on towards Winscombe and try my luck at King’s Wood. Before that was Winscombe Drove – often the muddiest stretch of the entire route. You can see two walkers wearing ponchos, while the boys in blue behind them were also thirty-milers.

While I wasn’t to be the only person walking through the rain in shorts and a T-shirt, I did find the biggest consequence of the weather was the effect it had on increasing the hazard of slippery mud in several different places.

I think more people will return with walking poles for next year’s challenge. 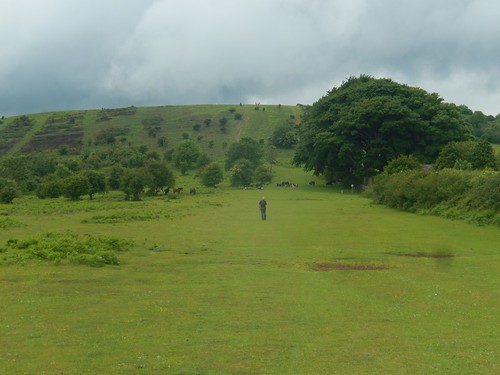 I did have my lunch in King’s Wood, even though it lacked the kind of shelter I had hoped to find. Rain falling through the leaves while determined droplets made an incoherent mess of a text I was hoping to send. 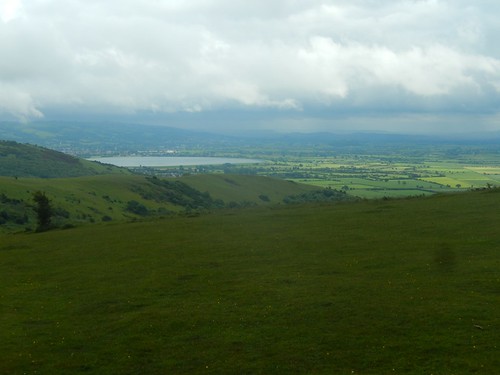 I sat for only ten-minutes, or else I feared I may begin to feel cold. Quite literally, as I climbed up and out of the trees, the rain stopped. It was cloudy but suddenly, the air was warm, as I walked on towards Wavering Down.

I’m always amazed to meet people doing this walk who don’t stop for lunch and often opt to ‘eat on the move’; little and often; once every hour, or something to that effect. My two friends were no exception to this. I guess we’re all different because, personally, I like to stop halfway, take my boots off for a few minutes and bend my legs. I don’t know if I could walk non-stop if at a slower pace. I don’t know if I could do such a long walk at a slower pace! 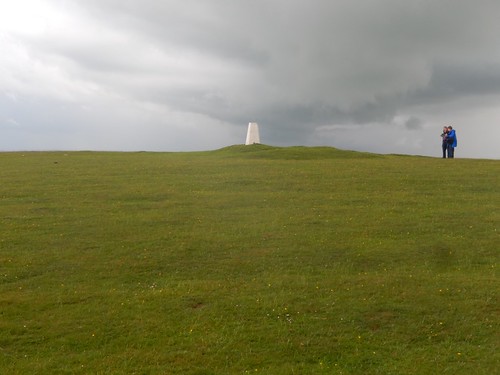 From the moment I reached the trig point at Wavering Down, I felt the cold wind from the north east, just as I was beginning to dry off. If this walk was at an average of anything more than 200m above sea level, I probably would’ve opted out of doing it, having forgotten my coat. At low mountain level (600m plus+), the climate can begin to differ significantly the that on the moors and lowland. 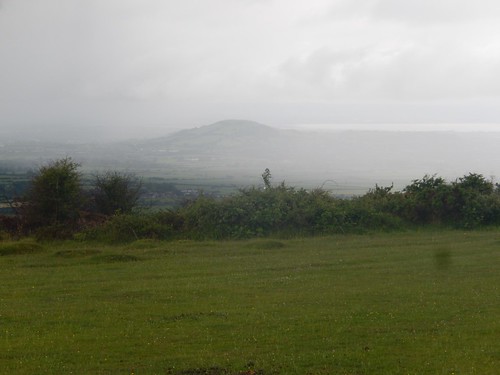 Brent Knoll, surrounded by clouds of rain… Which were only minutes away from returning to my immediate surroundings. 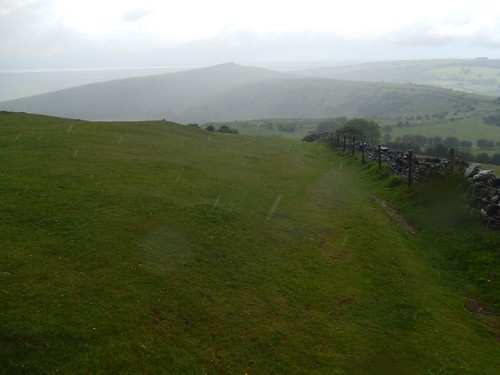 Crook Peak was faint in the distance and I didn’t notice any other participants making the optional ascent to the top, in these conditions. I was quite relieved to get down over the other side and to escape the wind. Even where the path became wet and slippery. 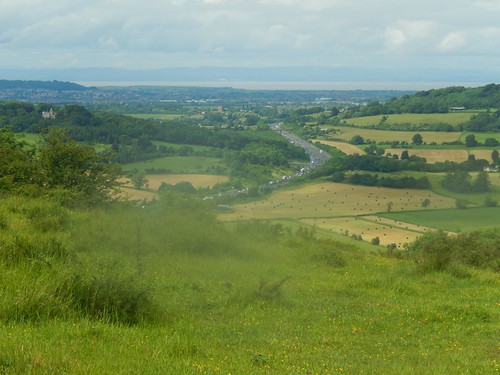 It’s normally at this point in the walk, beyond Crook Peak, where my enjoyment of the experience wanes and I just want it to be over.

I don’t enjoy climbing up Bleadon Hill – hiking up a narrow track with fencing either side, nothing to look at and a queue of mixed-event participants ahead of you… Can you see why I didn’t take any photos?

But I did pass someone else with a ‘squeaky’ Osprey backpack like my own. At the top, you join a long, hard and straight Roman Road past another compulsory checkpoint, before descending past Bleadon, up and over Purn Hill and soon to arrive back in Uphill – shortly before which, I somehow overtook the same couple for the fourth time in thirty-miles!

I don’t really know how… But we shared a laugh and I was asked if I knew the story of the tortoise and the hare.

Today, I’m feeling the unfamiliar ache that I think I was able to avoid in 2016. This year, I really hadn’t trained for it enough, with an average of ten-mile walks each weekend. But I’m pleased to have completed the walk in nine-hours and twenty-five minutes and the sun was definitely shining before the end.