Walking the final one-hundred metres of ascent towards the summit of Cadair Idris now, there was only one question on our minds: 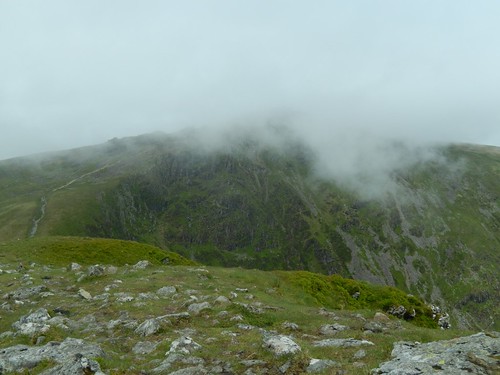 Would the cloud clear in time for our arrival? 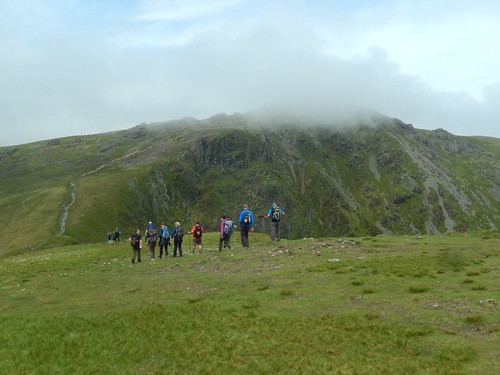 Following the initial climb up from Llyn Cau lake along the Minfford Path, we found the route levelled out briefly, as we continued across Craig Cau. 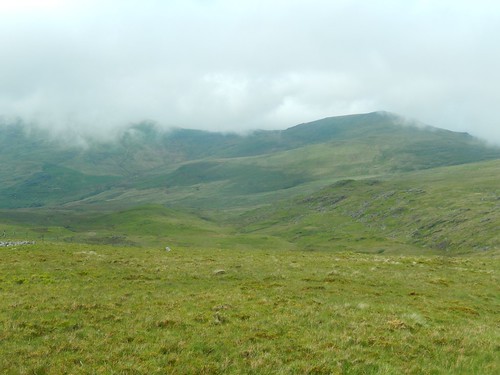 Surrounding us, there was a hint in promise across the landscape, as we witnessed the gradual thinning of the cloud. 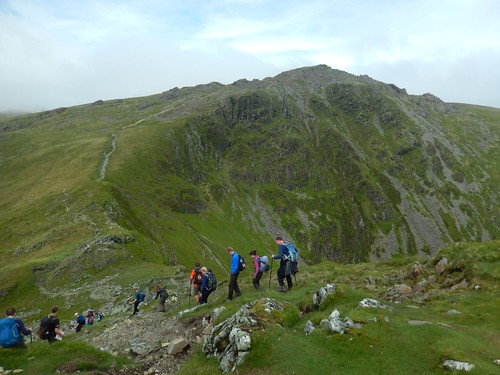 There was one area covered with rocks. It was difficult to trek across them and we paused for one final snack break here, before pushing on to the final climb. 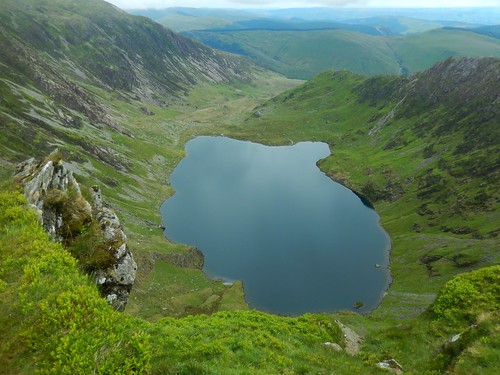 We went down before the inevitable ascent. Far beneath us was Llyn Cau; shaped more like an actual heart than your typical hand-drawn depiction. 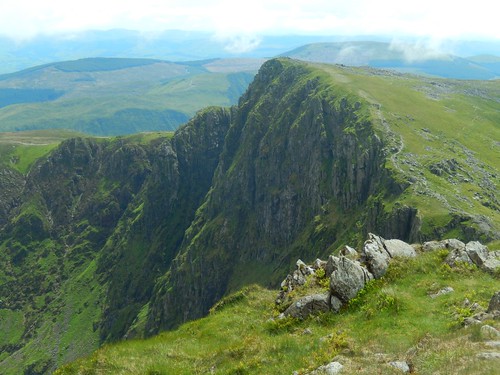 …I liken it to a signal for Batman, if the hero that Gotham deserves was to gain a lot of weight, perhaps. 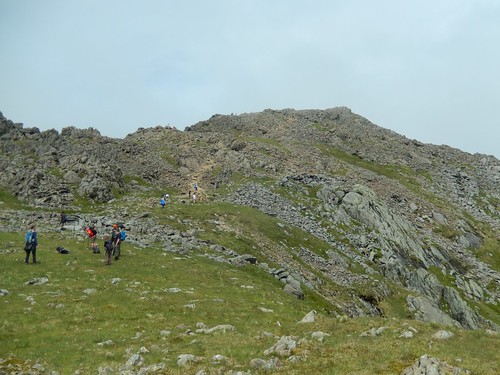 By the time we reached the rocks at Penygadair, we could clearly see the summit and not because of our close vicinity. This ascent may look brief and easy but I only remember it as being hard, with the ground turning grey once again, beneath our feet. Even the ‘second wind’ I’d experienced after the last snack stop wasn’t enough to prevent me from huffing and puffing to the top. 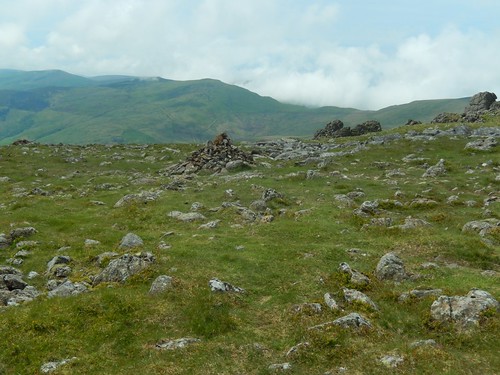 Finally, we were there, amongst the cairns and a crowd of other visitors, with cloud continuing to clear, right on cue. 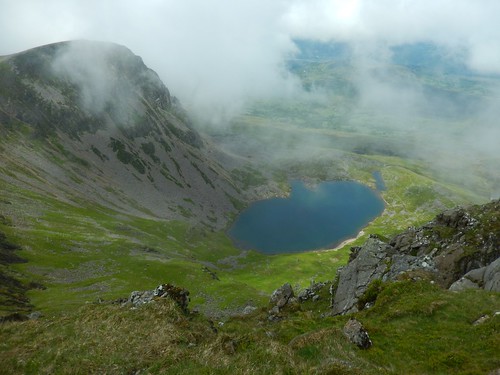 Here’s another photo looking down over Llyn Cau and I regard this as one of the best photographs that I have ever taken. It’s certainly my favourite of 2017 so far. 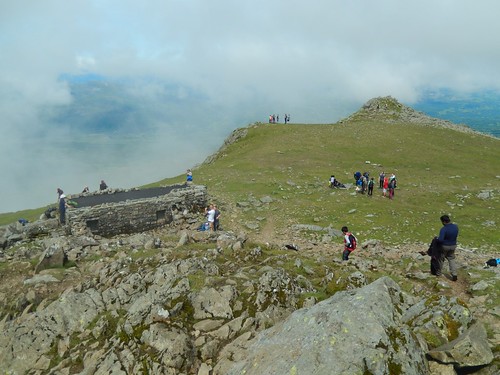 As a complete group, we joined the queue to stand beside the trig point. I mean, if Cadair Idris was this busy, I dread to think what Snowdon must’ve been like! 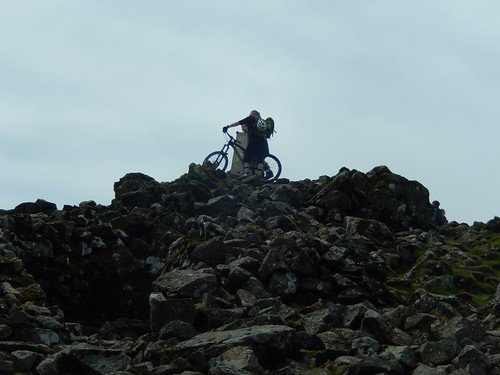 We must’ve had a group photo that was shared on Facebook somewhere; I didn’t get any of my own. But here is one of another hero – a mountain biker, in fact! I wonder how for how much of the climb he actually sat on the seat? 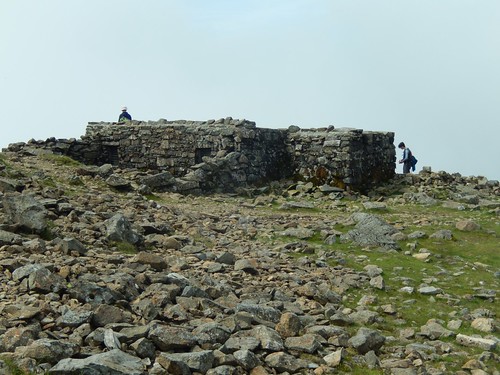 Also on Panygadair is a well-known shelter. Some hikers have used this space as an overnight bothy (Phoebe Smith, being perhaps one of the better-known examples with her books on Extreme Sleeps and Wild Nights). A legend states that anyone who sleeps on this summit will awaken as either a madman or a poet!

I quite like the idea of doing this, having never stayed in a bothy before. But I can also imagine it’s a fairly popular place of refuge. 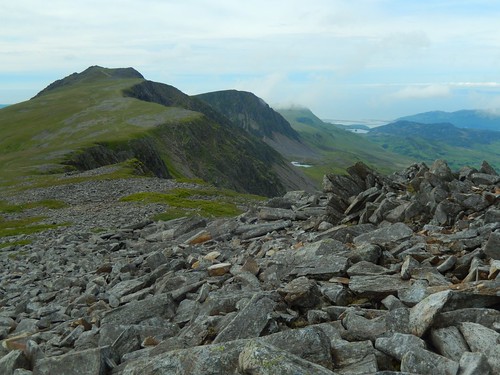 From the summit, 893m above sea level (higher than Pen Y Fan but 192m beneath Snowdon’s café), we now walked in an easterly direction towards Mynydd Moel, losing a little height along the way. 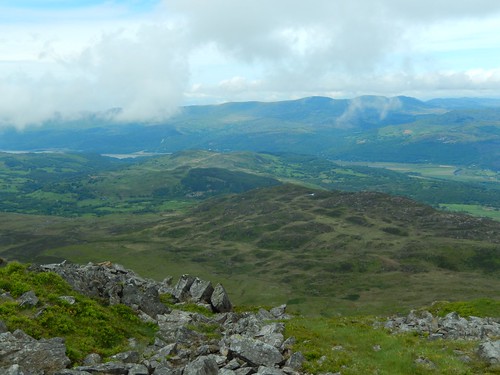 Somehow, the views to the north here seemed superior to those of the busy summit. 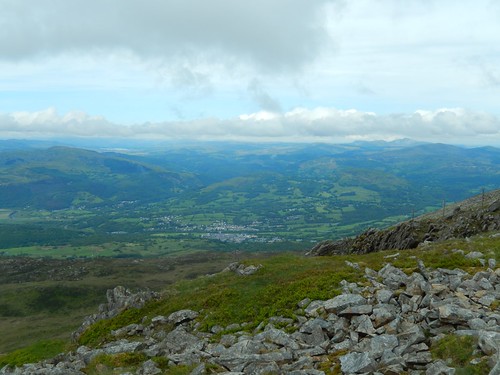 We could clearly see the town of Dolgellau [“dol-geh-hlli”], close to where we would be camping for a final night. 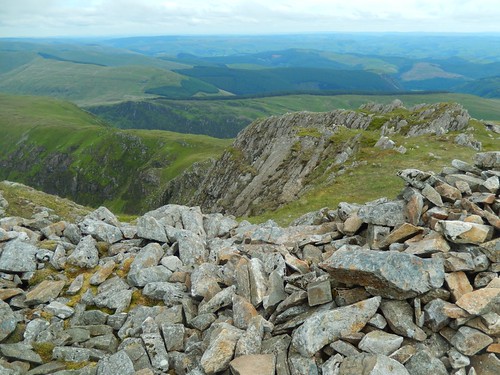 We found a man-made windbreak or shelter (similar to one found on Fan Y Big in the Brecon Beacons) and quickly filled it with almost every member of our group. 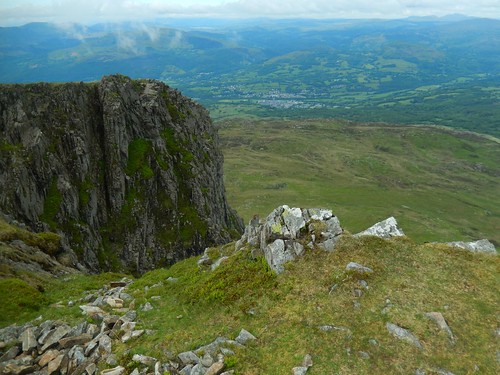 We admired as much as we could from this great vantage point. However, we were a long way from our cars and the line that would lead us there was mostly a vertical one… 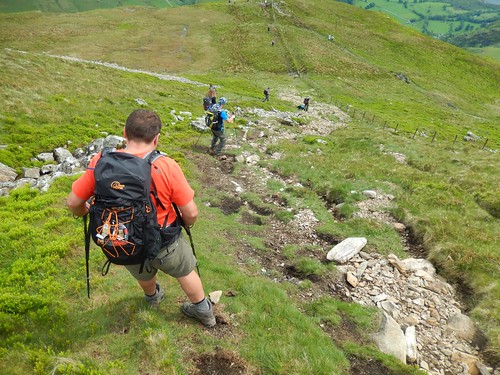 I cannot be certain of the exact route we followed in our great descent of Cadair Idris but I remember Dave mentioned ‘seven-hundred metres’ before we each struggled down what felt like a near-vertical drop. 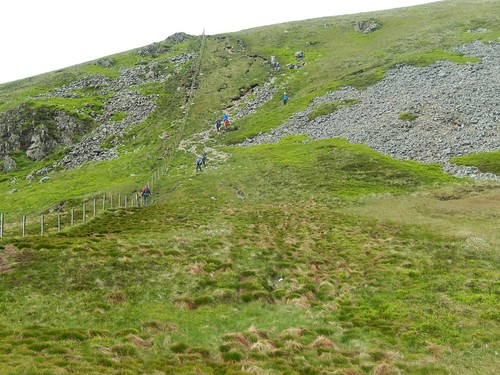 …I say ‘struggled’ but that’s with the exception of walk leader Dave, who jogged down much of these slopes like the proverbial and self-proclaimed mountain goat!

While the rest of us, susceptible to the force of gravity, struggled our way down slowly, steadily and rather painfully, even with a pair of walking poles! 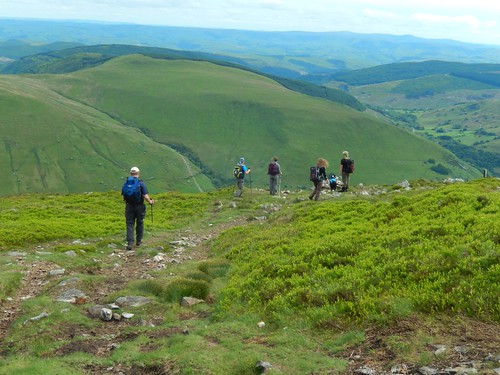 I reckon there was a good twenty-minutes between the first of our group reaching the bottom (at the foot of the stone staircase we’d climbed in the morning) and the last person. It really was that tough and, in contrast to the ascent where we’d received respite now and again; it really was downhill all the way.

We were walking in a southerly direction, staying close to a fence on the right before passing through, after perhaps 400m, and walking on to rejoin the steps (which weren’t welcome, with knees feeling like jelly). 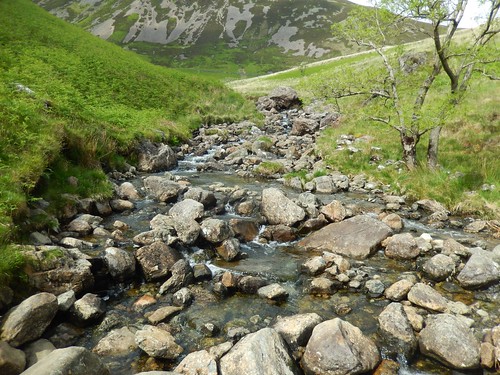 Some people opted to remove their shoes, socks and bath their feet in the cold running water. Nearby, there was even a small café (at the foot of the mountain) serving cups of tea and ice cream.

However you prefer to spell it, I did enjoy conquering Cadair Idris (or Cader Idris, as it’s scribed at Pole Bank in Shropshire); which remains to be my first mountain in Snowdonia and the non-southern half of the UK. I’ll find the time do Snowdon one day but regardless, I would thoroughly recommend Cadair Idris to anyone visiting this part of Mid Wales.

Distance of this walk: 7.5 miles