Climbing Cadair Idris in May 2017, with Brunel Walking Group. In this Part 1, we make our way up to the lake, Llyn Cau. Would the cloud clear before we arrived at the summit?

In an ideal world, I’d be sat here, ready to start writing up a walk I did last weekend in the Peak District… But with little time for blogging in this thing called LIFE, I’m going to take you back to a weekend at the end of May. 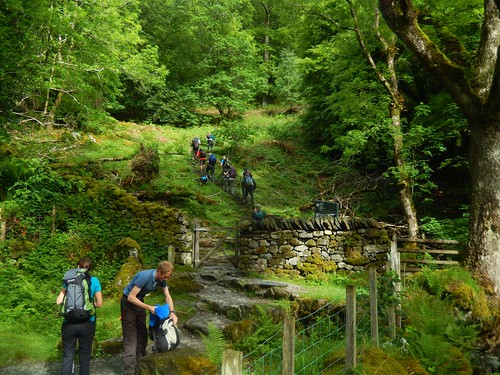 Camping away with Brunel Walking Group, this was our second full day in Snowdonia, ahead of a final night’s sleep and long drive home to follow. I think it was only a ten-minute drive from the camp site but the majority of the group set off to climb Cadair Idris. 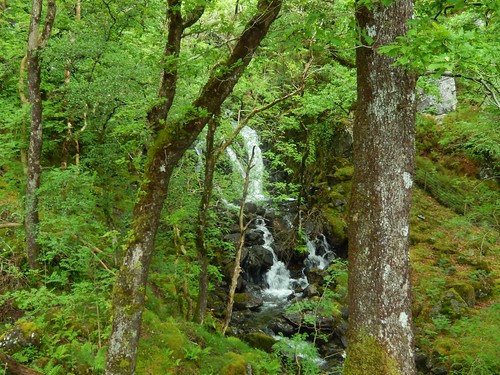 There were actually two walks planned for this mountain on the same day; one being longer than the other. But the decision to scrap the longer walk was made when we realised the majority of the group were in favour of a shorter but still physically challenging hike.

After a convenient toilet stop using actual loos, we were walking towards the sound of falling water at Dol-y-cae, when we arrived at a taunting staircase of stone that would lead us up and towards the clouds. 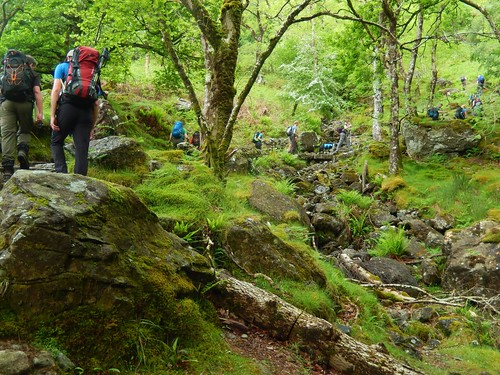 Although hard on the legs, these steps (goodness only knows, how many there were and how long it took to install them), these steps were relatively easy to follow, with only the occasional large rock or boulder to negotiate. 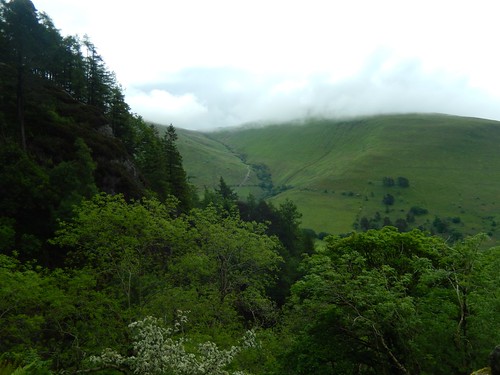 We probably climbed a good 300m before leaving the stone steps for a more typical mud-brown footpath. Quite literally, we were walking up in to the cloud, with cumulus hanging over the summits of around 800m (by comparison, the top of Cadair Idris is around 893m above sea level). 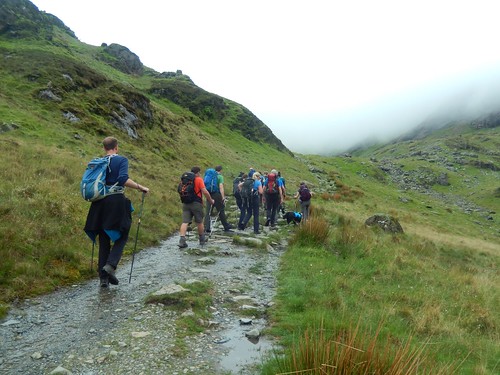 There were no great concerns over navigation or the way forward, as many numbers of people had clearly walked this way before us. 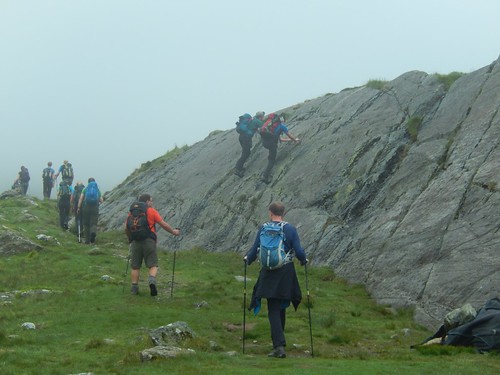 We probably wouldn’t have wanted the cloud cover to have been any thicker but, it also seems unlikely that we would’ve lost the path at any point. Meanwhile, some were keen to scramble up the occasional rock face! 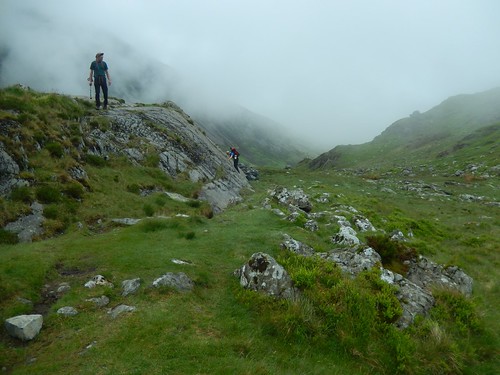 Here’s Dave, standing on top of the world… Or, as much of it as we could immediately see! 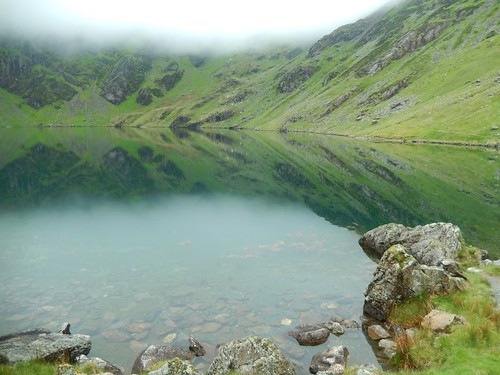 Somewhere around 500m above sea level, we left the green-dashed line to follow a finer black-dashed line (I’m looking at the OS map, here) to Llyn Cau; a small lake 400m beneath the mountain summit that is also popular with wild swimmers.

Nobody from our group was prepared to strip off and dive in, during these cloud-cooled conditions. It was very unlike the May Bank Holiday weekend, as far as weather was concerned. 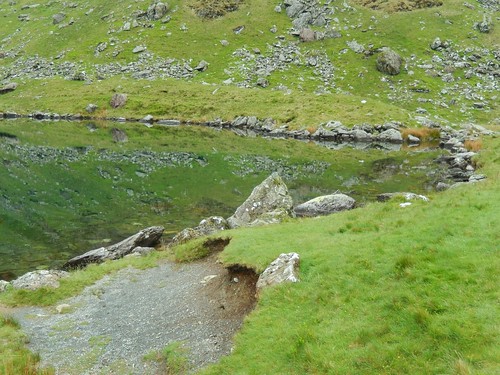 Llyn Cau is believed to be around 50m deep and, as we were informed by our walk leader (another Dave), it was apparently created by a glacier or boulder and many years of erosion… I really wish I could remember! There’s then the question of how life began inside the water, as this several miles up and away from the nearest ocean. 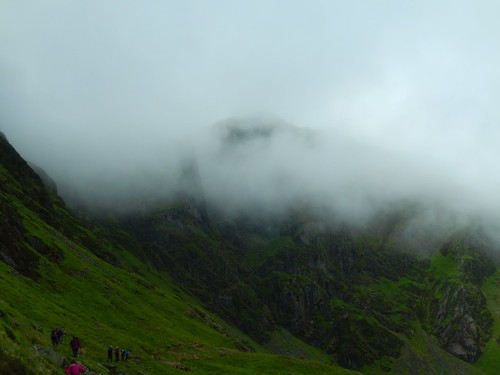 Craning our necks upwards and to the north, we could see the summit of Cadair Idris… Or, rather, we couldn’t quite! 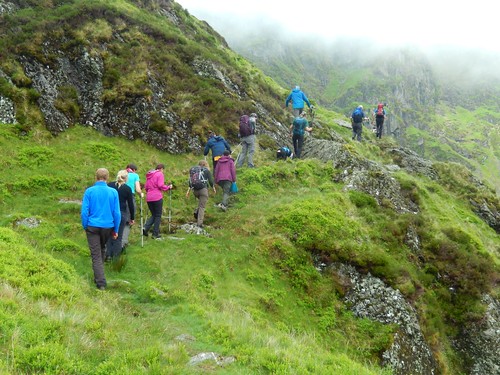 We paused beside the lake briefly for a snack break, before the majority of our group set off on a circumnavigation of the water, leaving a few tires legs behind, also looking after some of our bags. 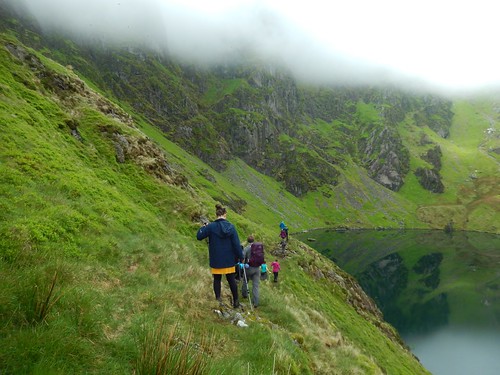 I hadn’t looked closely at all towards the landscape to of any of the ‘sides’ of the lake other than the one we were starting from… Somehow, I was expecting this to be like a level stroll around Cheddar Reservoir in Somerset… 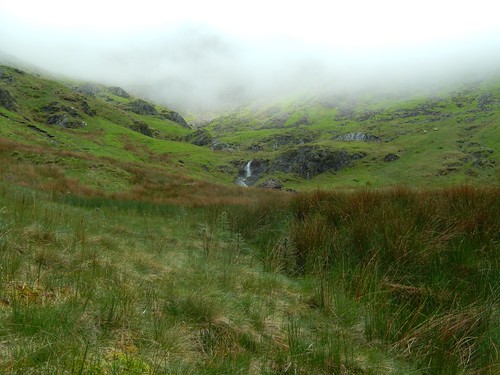 In reality, it was possibly the most challenging aspect of our walk that day! Going up, down over rocks, making precise placement of our feet as the ground beneath us was endlessly washed by spring water…

It got a bit boggy towards the end of our circuit and probably took us a good forty-five minutes but we were glad to be able to say that we had done it and nobody was keen to go a second loop! 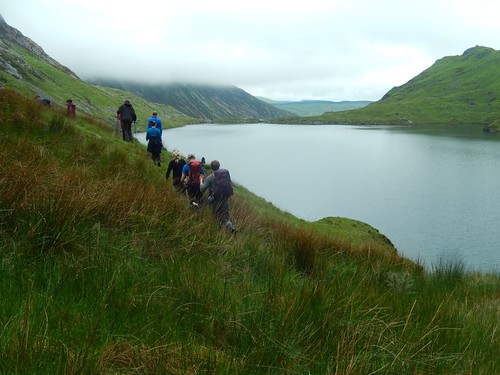 We were fortunate with the weather (it was dry) and it was only the barrage of midges in this area (not unsurprisingly, seeing as we were beside water in Mid Wales) that threatened our feelings of achievement.

For me personally, the itching would continue for an entire fortnight before the many bites to my arms would eventually heal. 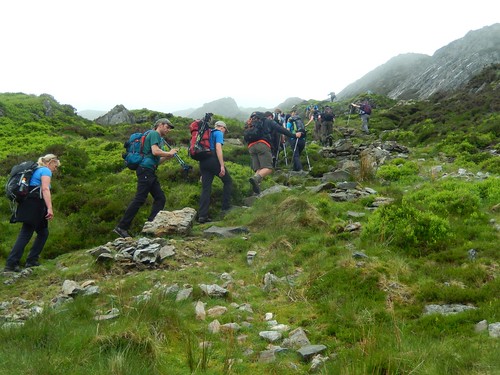 We did see a couple of small groups of people bravely taking to the water, shortly before we began the ascent in continuation of our walk, not looking to join the Minfford Path en route to the summit.

Suddenly, it was busy. That time we spent walking around the lake had allowed others to catch up and overtake us, while a few were already heading in the opposite direction; perhaps unwilling to wait for possibility of the cloud to clear. 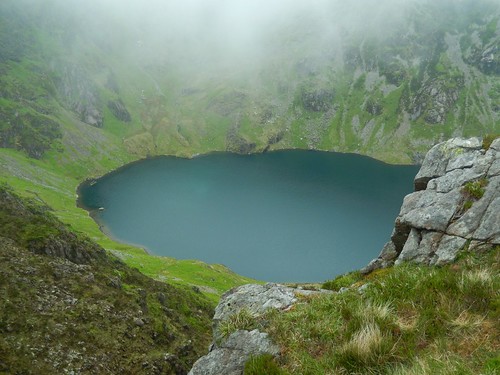 We were practically spiralling around the lake on our way to the top, with good views of the distant water surface below. Llyn Cau isn’t the only lake up here on Cadair Idris but it could be the most popular. 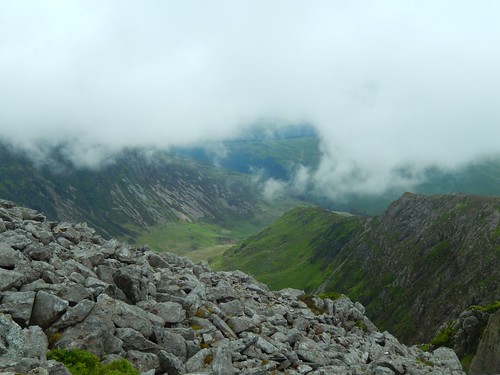 All around us, the cloud remained. It had been forecast to clear at 13:00 and by now, it was already midday, if not slightly later. 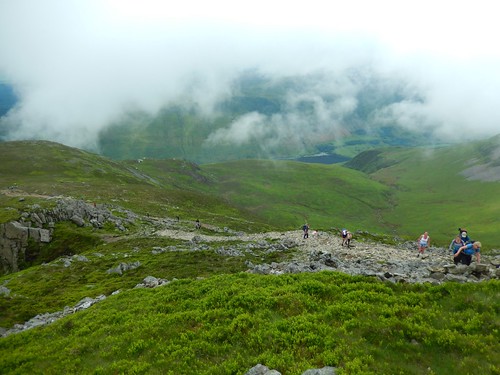 This was the kind of ‘risk’ that put me off of doing Snowdon on this weekend. To go all this way, only to find nothing to look at beyond the trig point or toposcope on the summit; standing with hordes of people; the sound of a train arriving or going; a queue for that lost photo opportunity…

Even if this cloud was not to lift from the summit of Cadair Idris, it had been an enjoyable and not over-crowded walk. 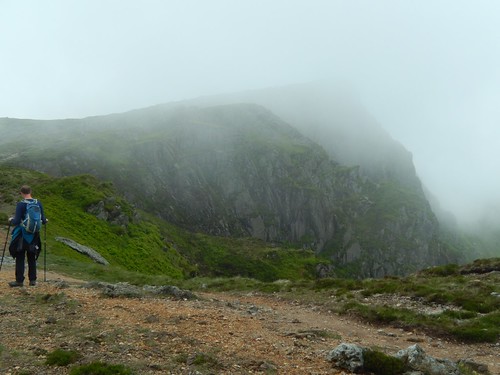 To find our whether or not we’d have any views of the Welsh world beneath us once we reached the top, please look out for Part 2!