Almost one year before this walk, I embarked (solo) on my first ever adventure in the Malvern Hills of Worcestershire. On that day of sixteen-miles, I conquered all of the peaks in the southern half of the hill range.

But it wasn’t until this walk (led by Jenny of Brunel 20s and 30s) that I would finally climb Worcestershire Beacon; the highest point along this ridge. 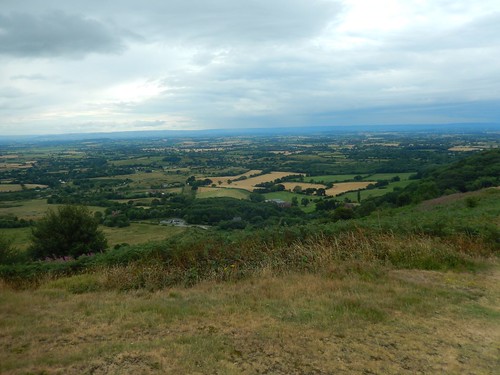 On my solo walk last year, I chose to use the free parking option at the side of the track near Hollybush (SO 759 368). This time though, Jenny had led us to a pay-and-display car park (SO 766 381 – I think it was £4 for the day, like many others in the Malverns) no more than two miles away, near Berrow Downs. 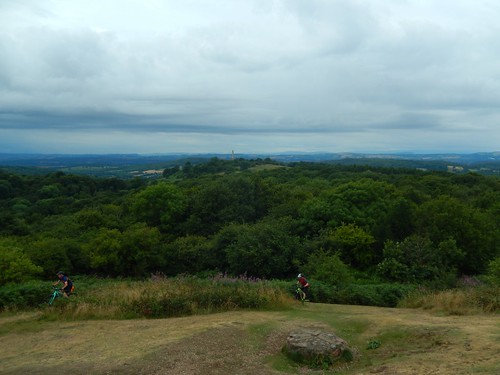 From this pay-and-display service in the middle of nowhere, we began climbing up past a lake near Gullet Wood and then Peacock Villa, which I recognised from my own walk here.

From there, we’d follow the Three Choirs Way, all the way to the summit of Herefordshire Beacon. 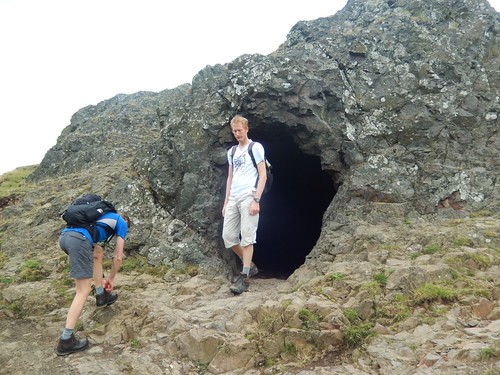 Jenny did a better job that my own attempt last year, where I found myself walking far and away from the footpath; losing height deep within the woods. Part-way along, we found a small cave and James (not King James, because Mark isn’t kneeling) was the first to explore inside. 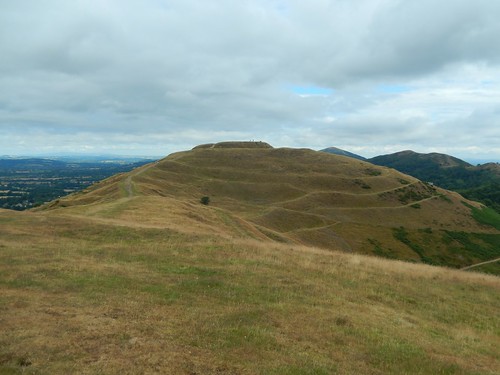 Herefordshire Beacon was once a hillfort, like many other flat-topped high points around the UK. Worcestershire is otherwise a flat county, away from this brief line of peaks. 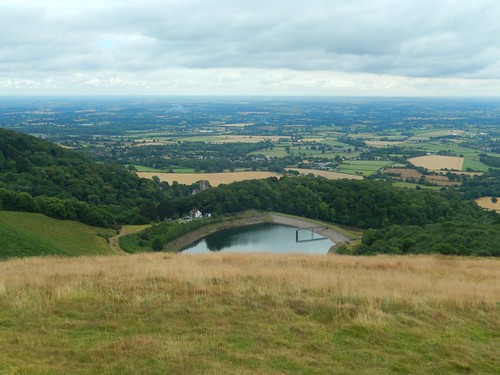 There’s a frequently used pay-and-display car park on the north-east corner of the foot of this hill. Steps lead to and from the summit and so, you can almost guarantee it will be busy here, when the sun is out.

Beneath us, on the eastern side of the hill, lies British Camp Reservoir. 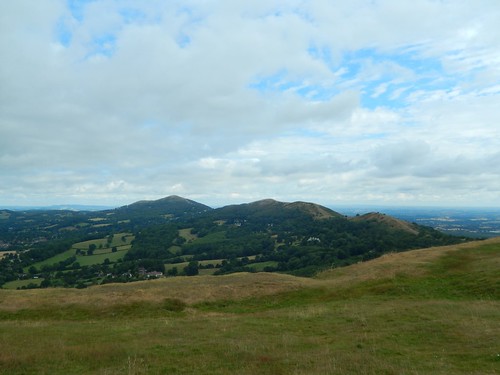 After a brief rest upon the summit, we’d soon begin losing height rapidly as we walked towards crossing the A449 road. Ahead, was a line of peaks that we would conquer in the afternoon – most of which, I’d not already experienced. 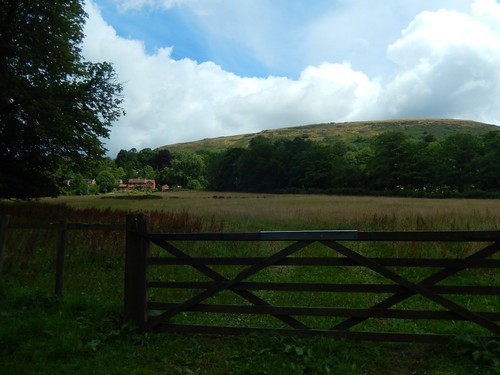 Over the road and, after using the convenient toilet block – with a few from the urinals – we continued our hike heading northwards, with the hills rising up on our right-hand side. 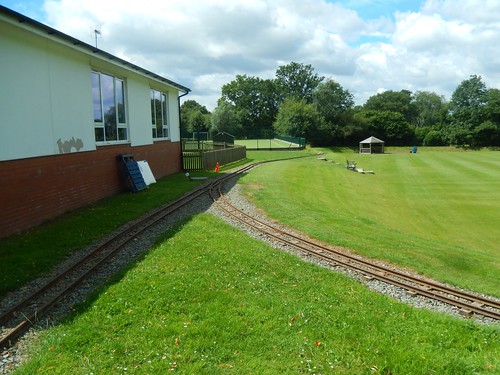 Somewhere along the way, we passed through the grounds of a private school, where a miniature railway could be found running the perimeter of the field. Sadly, it wasn’t operational during our walkthrough and there was no other soul to be found. 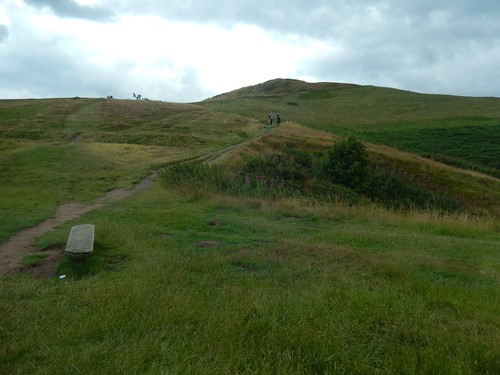 I reckon we walked as far as West Malvern, before crossing the B4342 to begin our inevitable climb back on to the ridge.

To call it simply “steep” would be an understatement. Even as a regular hill walker, I found this to be very hard going and I’m sure this was after our re-fuelling lunch stop. 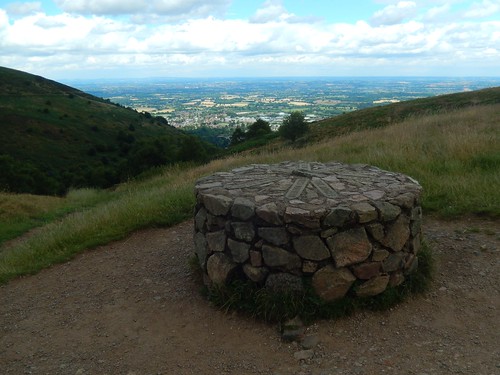 If you’ve ever looked at the spaghetti junction of footpaths surrounding North Hill, Table Hill and Sugarloaf Hill, you may understand the necessity for this signage slab! 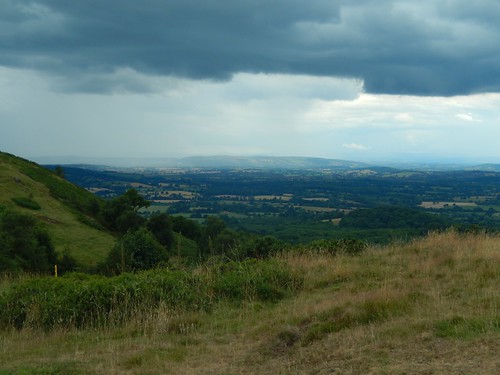 Meanwhile, over the border in Wales, the heavens appeared to be opening up on an overcast day. In the west of England so far, we’d remained dry. 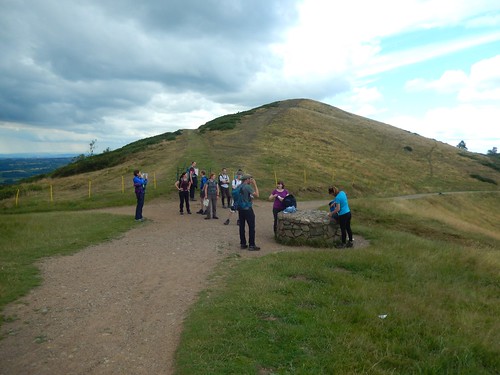 We all had a breather beside the stone. Behind the group, you can see the climb that awaited us. 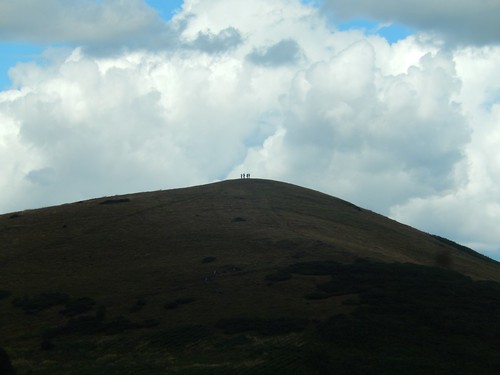 I named three hills a moment ago and, if I was to add a fourth (End Hill), that would identify the number of peaks I still need to ‘bag’ on my next visit to the Malvern Hills. This photo was looking north towards either Sugarloaf Hill or North Hill; decidedly quit on the summit. 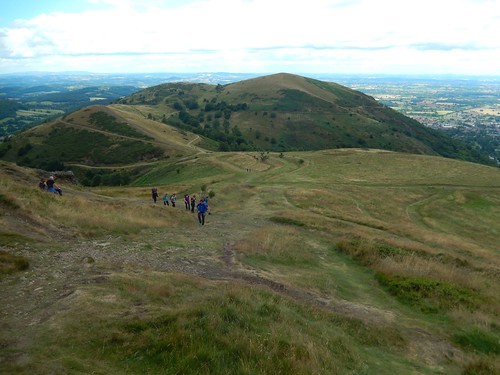 No turning back; we would climb a good fifty metres to the top of Worcestershire Beacon and the highest point within the region. 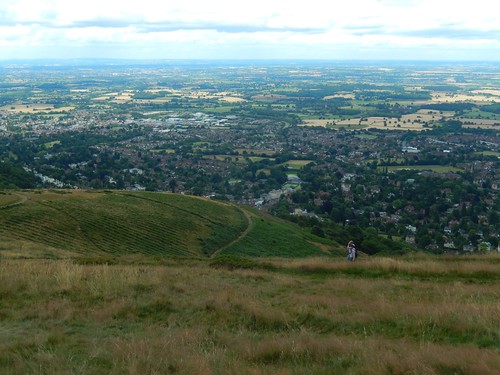 Beneath us and to the east was a superb view over looking the town of Great Malvern. 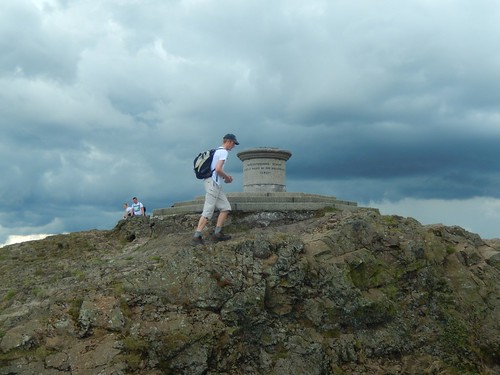 James was the first to reach the toposcope, with the rest of us soon to follow. 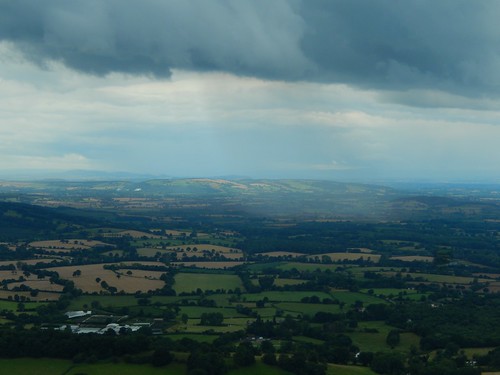 Meanwhile, in Wales; you could visibly see the sky falling with the rain! What’s more, it appeared to be heading eastwards and, as we continued south, we would be certain to cross paths at some point. 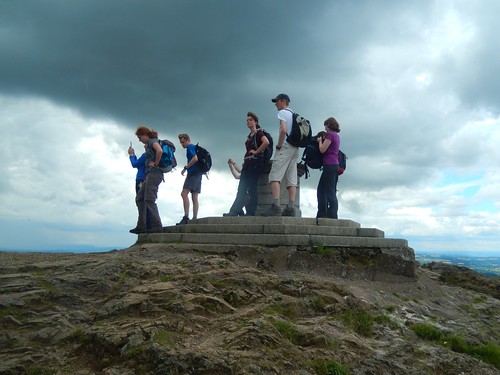 Just beyond the toposcope, we found our only trig point of the day, 425m above sea level. 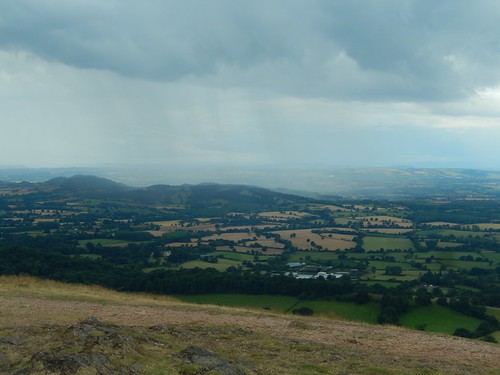 That rain, over in Wales, only appeared to grow in intensity. 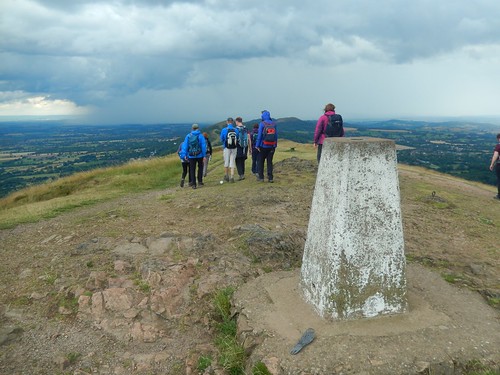 Wrapped up, waterproofed and ready to get wet, we marched on towards the “Wall of Rain” towards the southern end of the ridge. 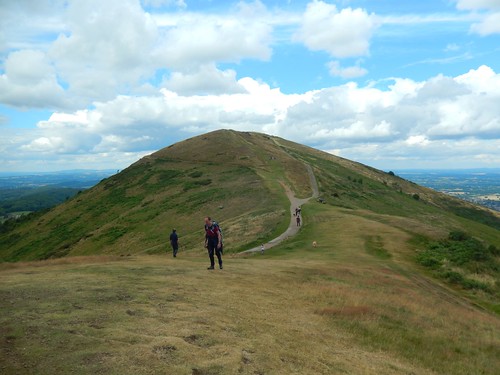 We crossed (and bagged) Summer Hill before descending to a road bend and junction with the B4232 near Upper Wyche. Over the tarmac was another toilet block (still, not charge). But, we were soon climbing once more, towards the top of the aptly-named Perseverance Hill. 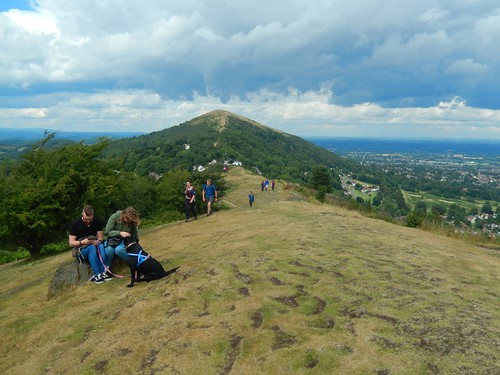 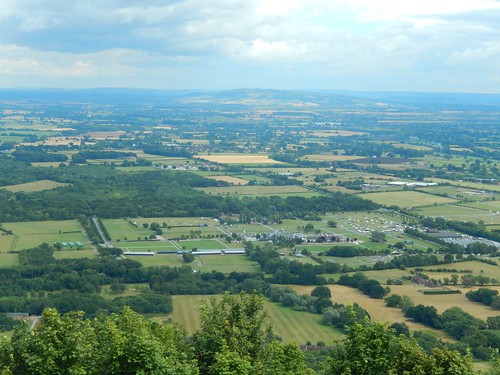 You can clearly see the Three Counties Showground and, perhaps, Bredon Hill beyond. 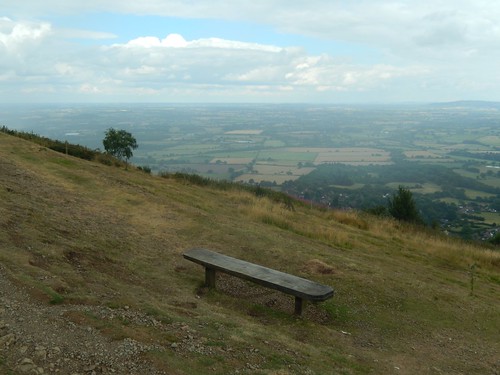 Once more, Jenny had done a better job at leading us along this route than I had on my own last year – when I found myself losing height while walking along the wrong path.

Jubilee Hill and Pinnacle Hill would soon follow. But, I don’t think it was until we’d crossed Black Hill and began our descent to the road that we final met with the rain.

Back at the same road crossing of the A449, many of us took the opportunity to stop for a nearby ice cream, while others were happy to sit beneath the shelter of an umbrella, before the darkest clouds soon passed over. 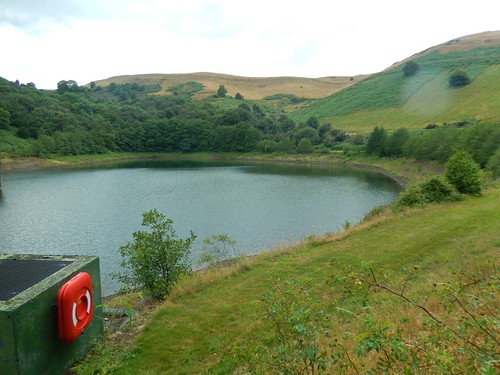 Our return route led us beneath Herefordshire Beacon, beside the aforementioned reservoir and soon, to cross Berrow Downs and Open Access Land en route to the cars.

A great walk in which we didn’t fair badly at all, beneath such a heavily overcast sky.