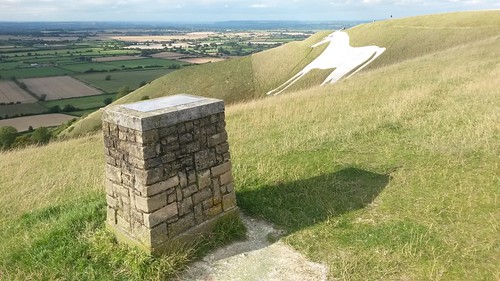 We marched on, heading south now, with thoughts of completing the walk – and the challenge – in our minds. Not to mention, the post-walk picnic celebrations.

Still we were walking anti-clockwise. 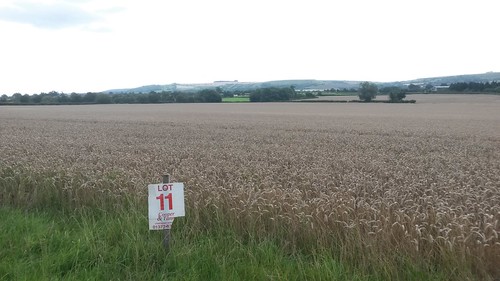 Somewhere beyond Steeple Ashton, I remember seeing fields; each designated with its own plot number.

Were these up for sale? Hopefully not available for housing developers. There seems to be enough of that going on, up and down the countryside. 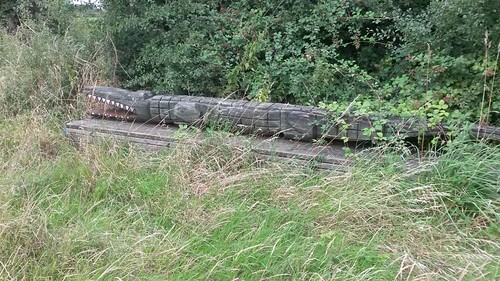 We found another crocodile – slightly less terrifying than the one scaling rooftops near Pewsey. But equally, more like the genuine article than the caiman found at Chew Valley Lake around the same time.

There was no explanation for its presence or clues as to who had made it… A seat, perhaps? 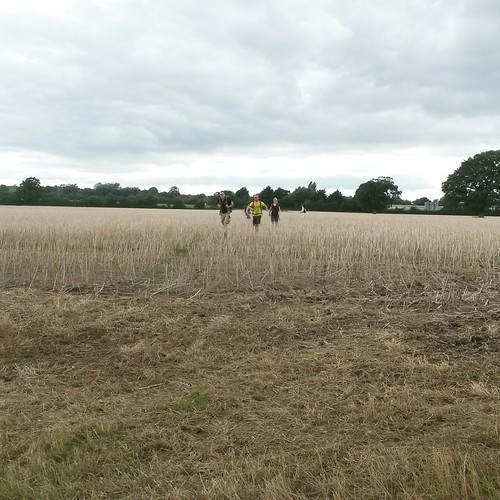 Dying crops plagued the way across our next field – possible remnants of recent harvest. With many cracks, snaps and crunches, we fought our way through. Yes, it does look like they’re running in the photo above!

Ahead of us was a wooden stile, in good condition and complete with a waymarker for the White Horse Trail. In front of that though, was a white arrow, which we chose to ignore… 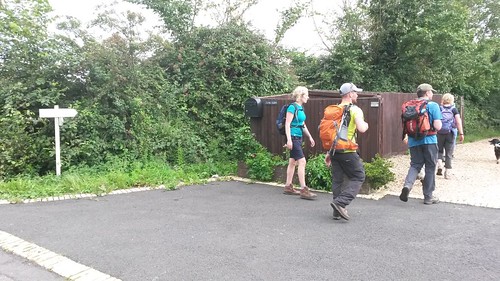 I was towards the back of the group at this point and, with almost half of us over the stile and following the public right of way across the field, when we were told (presumably by the landowner) that we’d have to turn back and follow the white arrow because we wouldn’t be able to get through!

There was no further explanation and I didn’t see anything beyond the stile. But, this whole situation is a suspicious one. 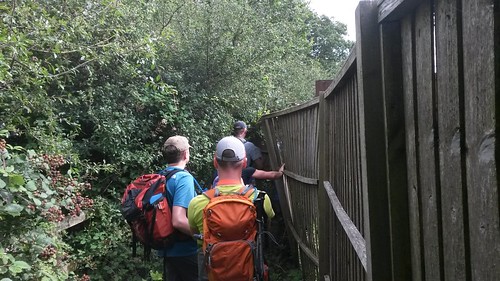 Following the suspect white arrow, we were led behind a screen of falling timber fence panels; each person having to hold one up for the walker behind, while also reaching for the obstruction ahead. The landowner seemed grateful that we did this and told us not to worry about pushing the fencing right back.

So, the path we’d intended to follow was at Capps Lane, Heywood: 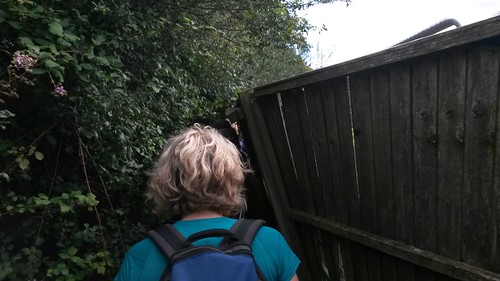 We were inconveniently ushered from ST 902 536, where we did eventually meet the intended stile.

Having written this post now, I’ll try to make a better effort at contacting Wiltshire County Council directly. I’m not aware of anyone else in the group who has done so already and, by coincidence, I will be taking on the role of ‘Footpaths Representative’ from November.

Intriguingly, Google Maps shows this space to be a large vacant but gated one, with a handful of cars and one static caravan in view… I do wonder what the owner is trying to hide. Even though the “diversion” signs have been carved with a router (by the look of it), I highly doubt it was implemented with the council’s authority. 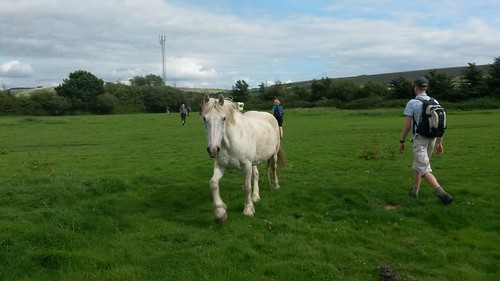 On to more positive things and we met our first ‘white horse’ of the day. 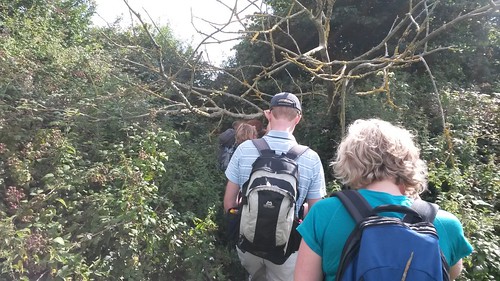 We did at last encounter some overgrowth, en route to Bratton itself. But this was no obstacle, compared to the fence panels of earlier. 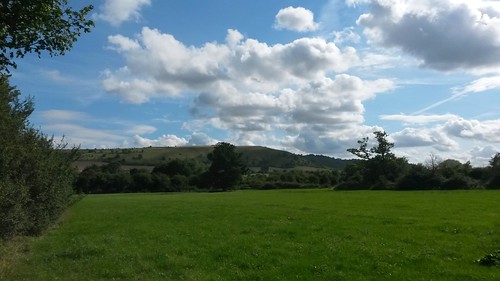 Bratton Camp was in sight and our route was soon to be come elevated. We almost lost our way across a couple of fields (due to a lack of waymarking). 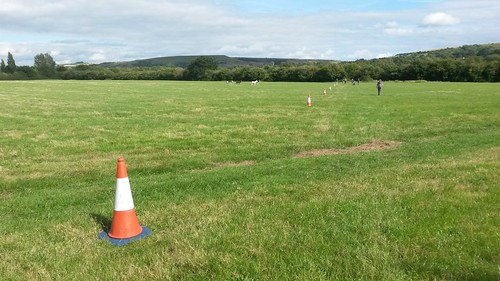 However, there was no such trouble in following the right of way across one particular field. 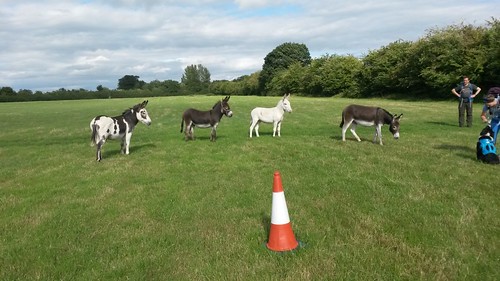 As on the previous walk in another part of Wiltshire, the donkeys we met were more interested in meeting Escha than anyone standing on two legs. 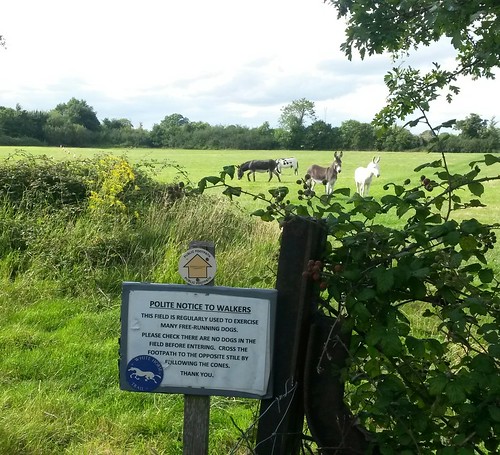 I don’t know. They still look like donkeys to me. 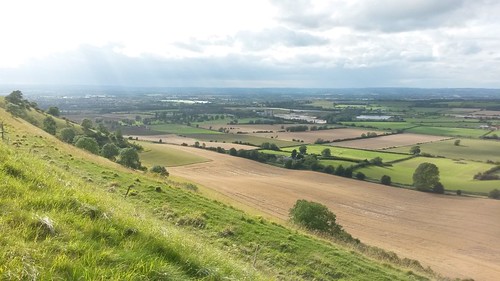 Our final mile in the White Horse Trail series would lead us back to the summit of Bratton Camp. 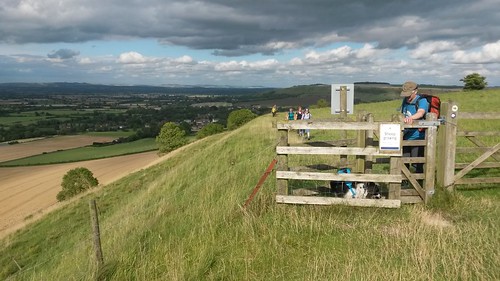 There was just one White Horse left to discover. One, I’ve found, that can be seen far as far as southern Bath and even parts of the Mendip Hills, if you look carefully. 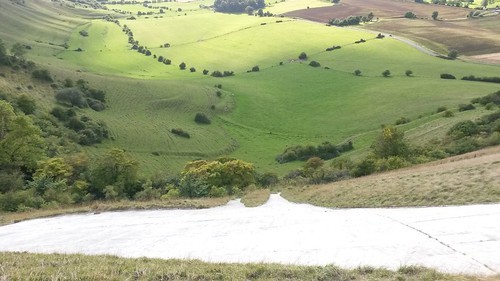 Up close though, the Westbury White Horse appears to have stumpy legs… Too close. 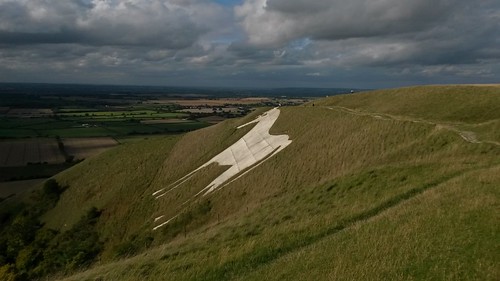 This isn’t the only White Horse Hill in Wiltshire but it’s certainly one of the best. Away from the chalk cliffs, the views are well worth admiring. 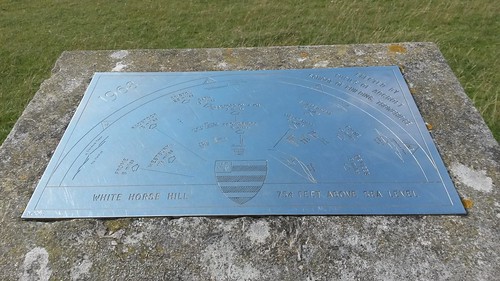 If it only covers the view ahead of you and not behind, is it still classed as a toposcope? 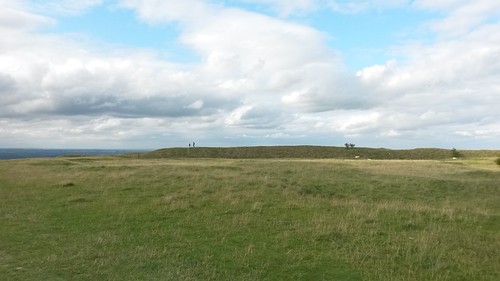 Above, you can see the resident long barrow.

Walked all ninety-miles of the White Horse Trail!! 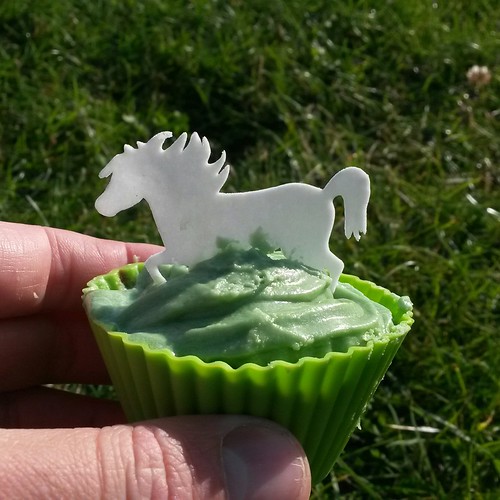 Everyone was entitled to a white horse cupcake (thanks to Jo for baking). 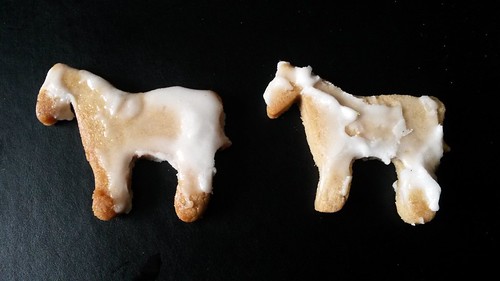 There were other treats on offer, including a more traditional picnic for all to share (thanks again, Jo). 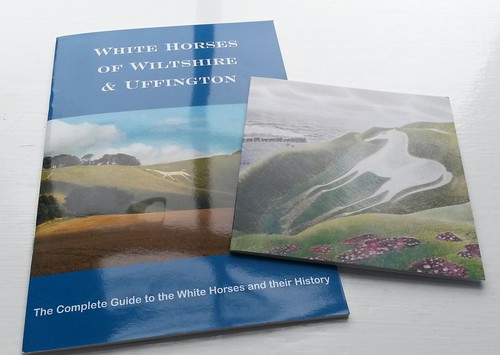 As one of the only people to complete all seven of our walks, I was both delighted and very surprised to be rewarded with this guide book and post card (thanks, Jo!). 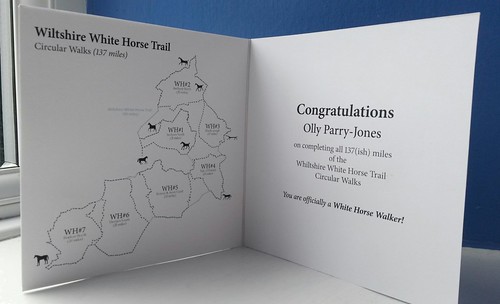 Already, these have gone in to my ‘memories box’, along with many other walking achievements and medals I hold on to.

As for the Uffington White Horse in Oxfordshire – well, we’ve since walked that one as well! 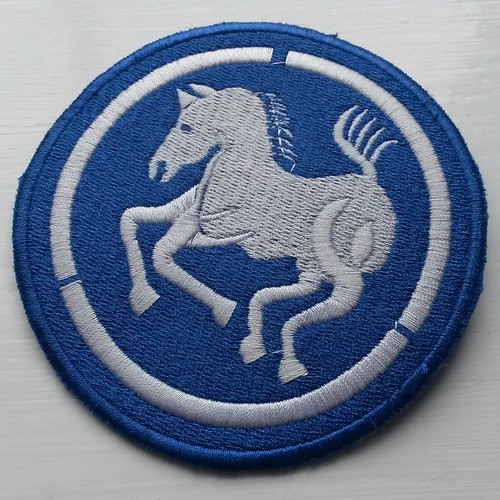 Apparently, there is no official White Horse Trail emblem (it’s not as widely recognised as The Ridgeway or Cotswold Way) but Jo (thank you, once again!) did find this online… Apparently it bears some relevance to Vietnam?! I need to learn how to sew.

Overall, it’s been a great experience, a fantastic achievement and all the more for being able to share it with a group. I never would’ve considered doing this route on my own and, even though I won’t be walking The Ridgeway this year, I’m pleased to be able to say that I have completed something. 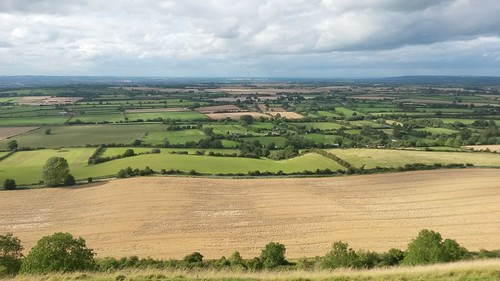