Having spent the morning in and around Matlock Bath, I was looking to move on after lunch and in to the early afternoon. 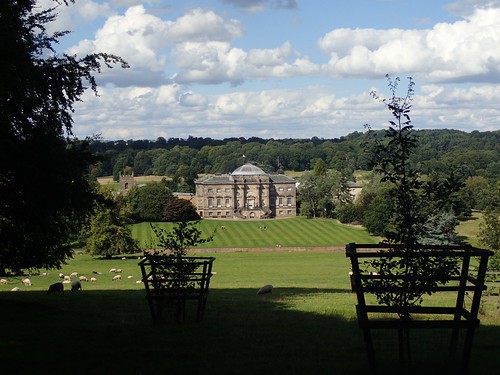 I felt it was still too early to encounter the three-hour drive home and I instructed my SatNav to plot a course for Kedleston Hall; my sole National Trust visit of the weekend.

I wouldn’t normally look to approach such a place so ‘late’ in the day. It must’ve been around 15:00 by the time of my arrival. Time would be limited, if I was to see and do everything… But then, I rarely spend more than a few hours at one property, unless I’m with company. 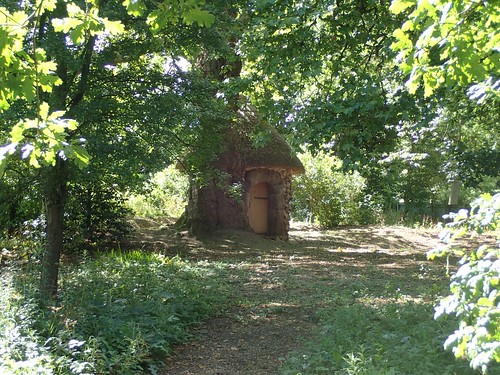 There were no issues with regards to finding the car park and leaving my car within the shade of a tree. It looked as it had been a very busy day, with the car park once full to near-capacity and now, as if 70% of those spaces had been relinquished.

I began my visit with ice cream… It was chocolate brownie flavour and from a local brand that I promised myself I would remember… [Sorry, me!] 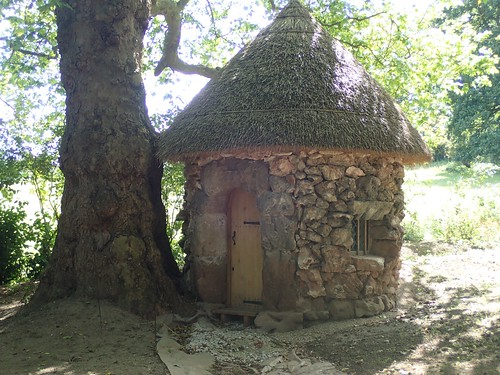 It was worth the minor expense and I soon set off on a walk around the estate, following the clear defined footpath that follows the park boundary through the woods. That’s where I passed the Hermitage, which you can see above. 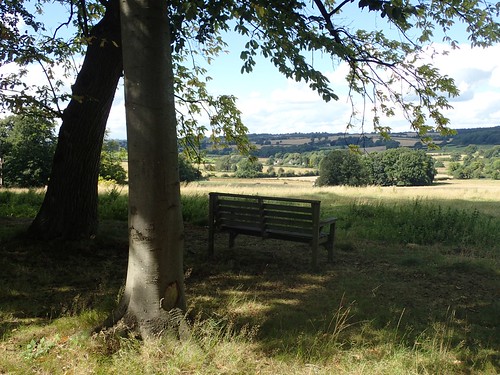 There was nothing much of a challenge on this walk – for me personally, compared to the range of hiking I do on a regular basis. Conscious of the clock, I was able to walk at a good pace and not feel guilty about that. 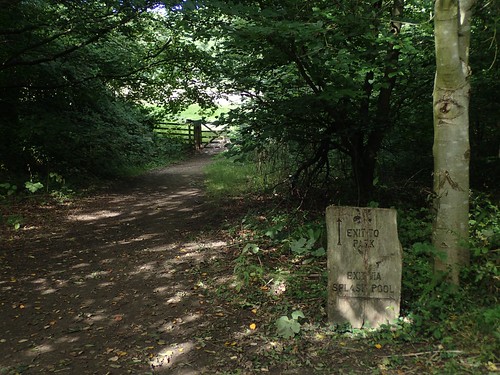 There are a number of viewpoints to admire from, towards the eastern end of the trail. Regular seating was also available (not something I often find in more rural countryside). 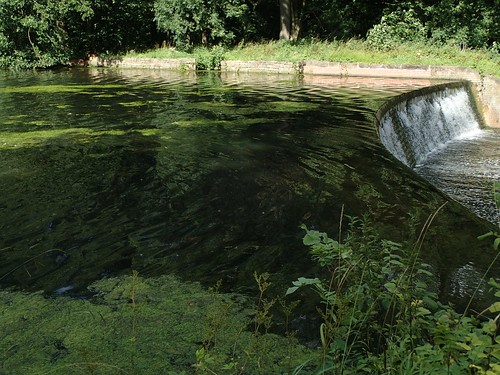 After a good while of pleasant walking, I arrived at the Splash Pool and the north-western end of Lower Lake. 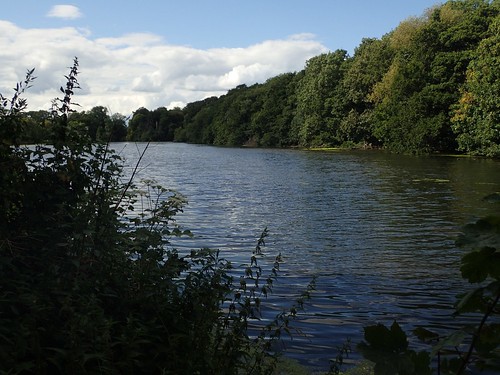 No-one else was around, to be seen or heard from this corner of the park. I found this experience to be peaceful in so many ways. 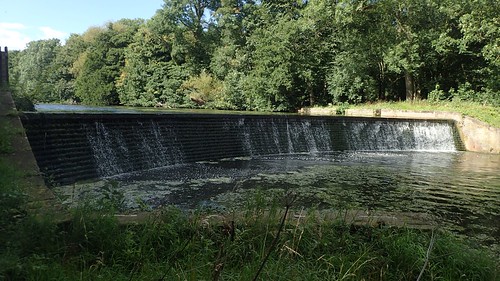 I’ve still yet to research the actual purpose of weirs but I most commonly see that at the point at which two lakes or reservoirs meet. Sometimes, where the ground level drops dramatically and also, ‘randomly’ along the length of a river. 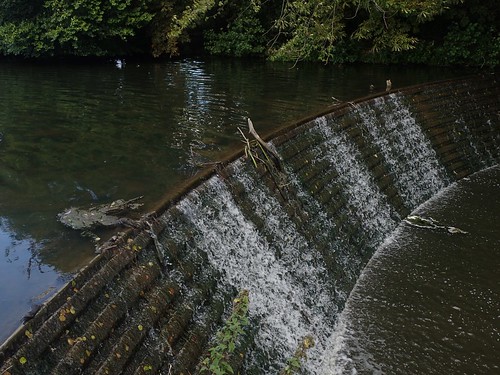 Now, I feel I understand why Tidal Bores happen and the effect our Moon’s tidal gravity has on the Earth’s oceans. But then, I don’t know why we don’t frequently see crashing waves in our local lakes, streams and rivers. 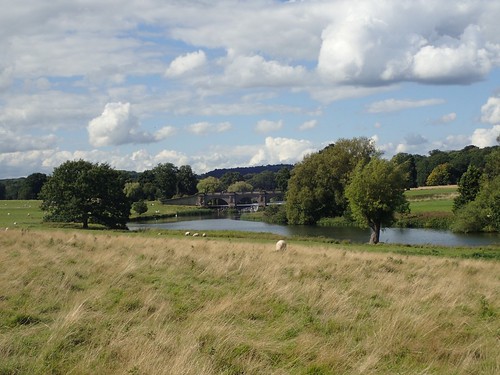 After admiring the water, I continued the walk around to the main portion of the park, keeping Middle Lake on my right. 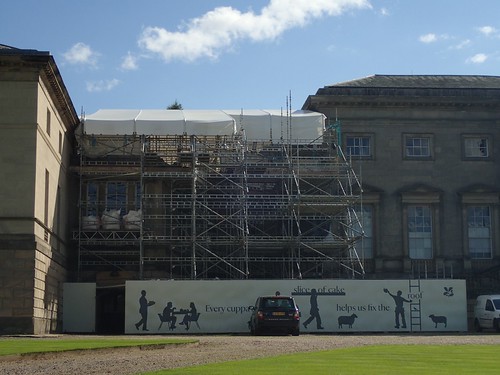 There’s a lot of landscape to be admired in this park. I was also interested to see repair and restoration work underway on the hall building itself.

Having read the sign, I decided it was time to turn in and ‘do my bit’ to help… 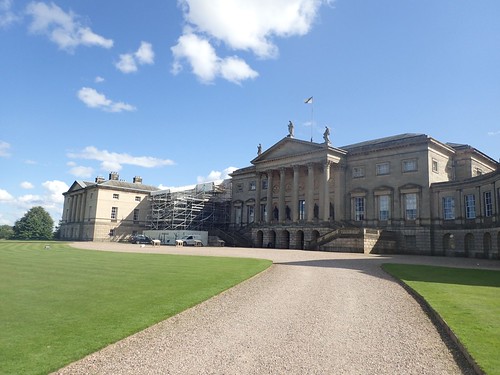 Faced with a dilemma, there was only ever one choice that I was going to make. 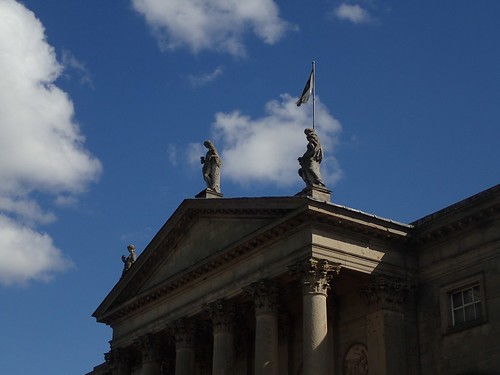 If I wanted to explore the hall interior, my deadline for entering was set to arrive. Equally, the restaurant was approaching it’s final hour and I didn’t fancy turning up late, only to be told that they’d “run out of cake” or something unfathomable… 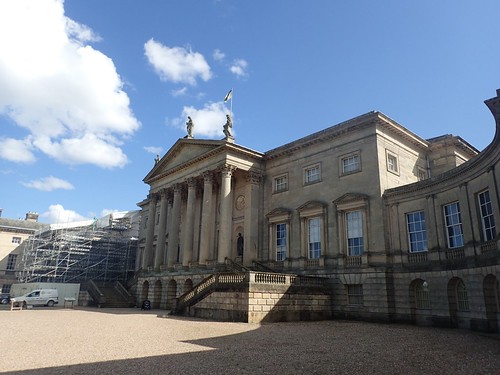 There’s no café at this particular National Trust property. All food and drink is purchased from and consumed within the restaurant beside the hall. There was a clear queue for the till but I found it a bit strange to be asked where I was sitting, when I’d only just arrived…

As it happens, you’re supposed to find your seat and table first before placing your order… This is a restaurant, after all. A concept that’s apparently lost on me! But I only learned this ‘secret’ from reading the menu on ‘my’ table… People like me might’ve preferred to see a big sign:

‘Find your seat before ordering at the till’

I waited possibly as much as ten-minutes for my pot of tea and generous slice of Victoria sponge cake. Neither did disappoint! 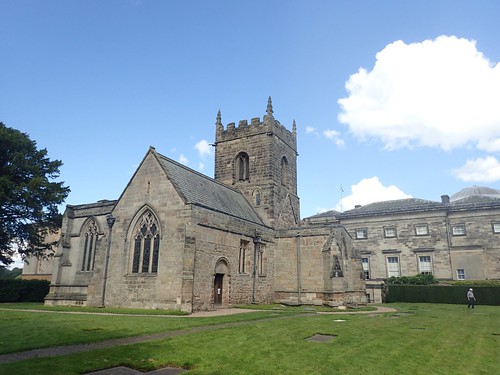 On leaving, I found my way around the corner to the local church (I think it was locked). There are also stables near by but they can only be accessed as part of a guided tour. 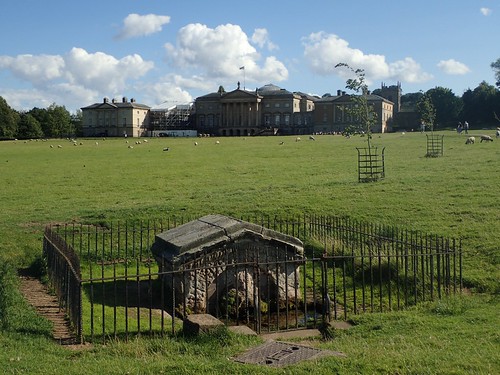 Back out in to the wider estate!

Heading for Adam Bridge, I found Bentley’s Well, with a view of the hall beyond. 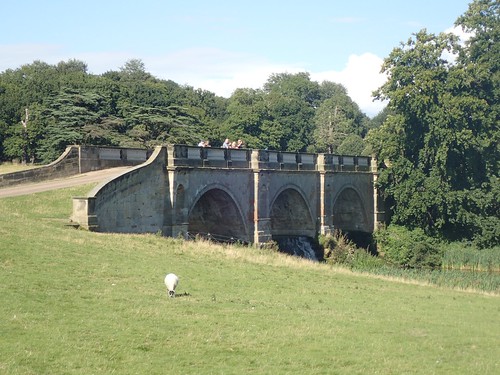 To me, this is almost a typical Derbyshire bridge – not unlike those I’ve seen around Matlock Bath and Bakewell – but with a touch of Robert Adam. 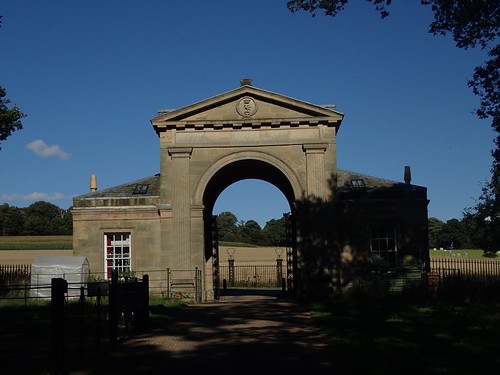 I followed the road over this bridge and on towards the North Lodge entrance. Realising I’d gone too far and wanted to get off the road, I found the left-turn I’d missed, which would lead me towards Bracken Wood and then through Hay Wood, south of North Park.

There was a woodyard; marked as private on the map but I’d hoped to be able to explore it further… 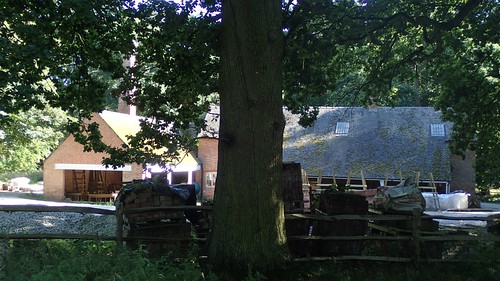 From a respectful distance though, I couldn’t see an awful lot. None of the towering stacks of recently slabbed and locally grown hardwoods that I’d hoped for… I’m sure this would’ve been in constant use hundreds of years ago. Today, it’s probably either used for education purposes or it’s something to make fencing and surrounds to protect young and vulnerable trees. 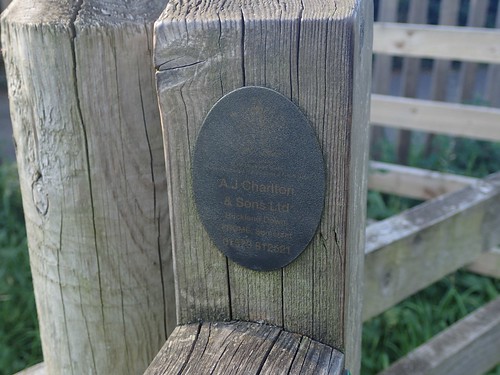 Here, I was, up in DERBYSHIRE. Yet, once again, I find myself walking through gates manufactured by AJ Charlton & Sons near Frome in… SOMERSET!

I’ve seen their gates up and down the country… But it’s not as if local businesses aren’t able to supply a very similar product – a firm I used to work for even has a branch in Moira, which isn’t too far from Kedleston Hall. A lot closer than Buckland Down! 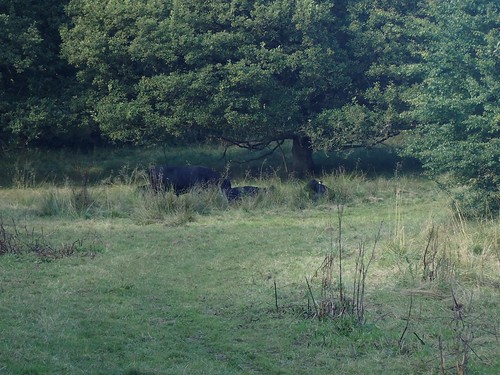 Anyway. I felt my heartbeat rise as I spotted a herd of very dark cattle, hiding in the low grass… Others could be hearing mooing from all around… But, I’m pleased to say, none of them got up or rushed over to come and say hello. 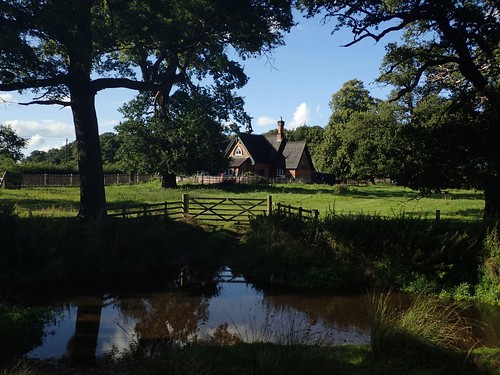 Having survived the non-Apocowlypse, I crossed the river near the Village Lodge main exit and and continued alongside the north-eastern edge of Upper Lake. 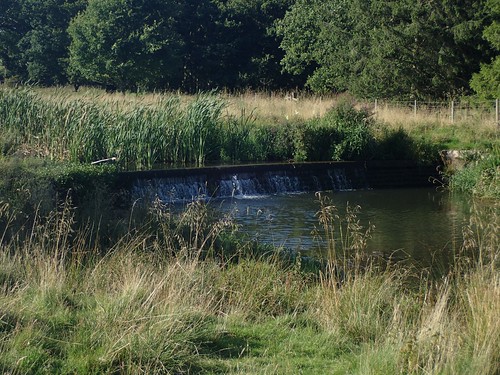 Still, there was no-one around; but for the occasional passing car, dozens of metres away. 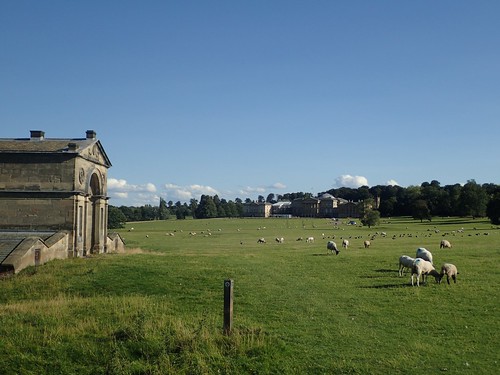 I was walking amongst bundles of sheep, by the time I reached the fishing room and boathouse. Sadly, I don’t think they offer outings on to the water. 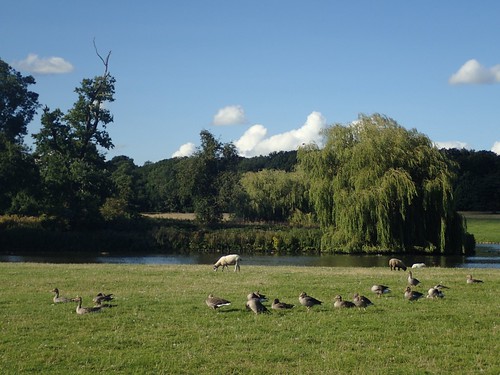 Away to my right, I could see a lone figure (I thought it was a woman), not unlike the pigeon-lady from Home Alone 2… Standing still, surrounded by birds and apparently overdressed for the warm weather…

Then, suddenly, around thirty geese took off and flew alongside the river in a panic! Had the lady startled them?! I don’t know. But as the geese flew over, they frightened the life out of the many sheep below, who were now darting off at full speed in a blind panic of their own!!

I found it quite funny. All before returning to my car within the final hour before the gates would be locked. 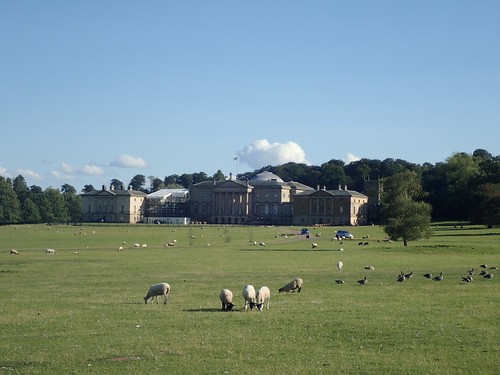 Kedleston Hall: one I’ll have to return to for an inspection of the interior.