From later October 2017: my second attempt at the Cat’s Back ridge in the Welsh Black Mountains. Climbing to Hay Bluff before crossing the Olchon Valley.

It’s with great coincidence in the timing of this post, that I come to write about my repeat of what was my first walk in the Black Mountains of South Wales.

Just yesterday, I’ve been back for a third visit within the space of twelve months…

You’ll read about that another day. Tracing back to the end of October and this wasn’t just a return visit; it was an opportunity for a YouTube meetup with Mark from Wye Explorer. 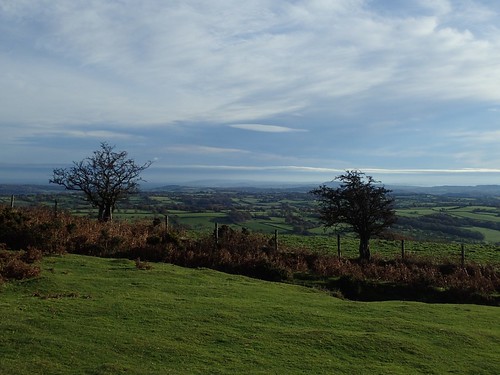 Mark and I have both been subscribed to each other’s channels for a long while and had spent most of this year talking about doing a walk together. Intention was there; it was more a question of arranging I time that was convenient for us both. 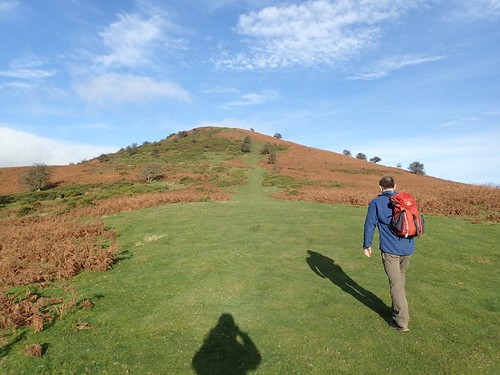 We arranged that I would meet Mark outside the Skirrid Mountain Inn, just off the A465, driving north towards Hereford. From there, I drove us both to the start point of the walk, at the Black Hill picnic site and car park near Upper House Farm. 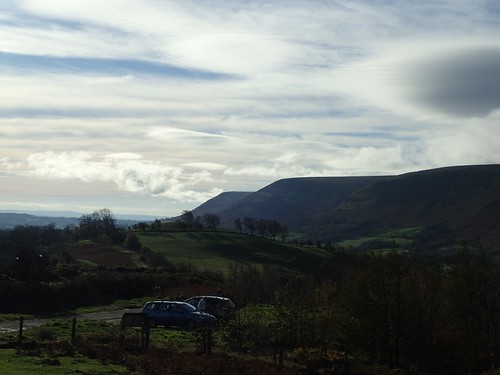 It’s worth me mentioning that this car park isn’t very big [hence, why it gets rated down one star in the reviews] and, with very considerate parking, I’d say you’re unable to get more than eight cars in without obstructing the driveway.

We began with the immediate and steep ascent of Black Hill (also known as ‘The Cat’s Back’ or Crib Y Garth). 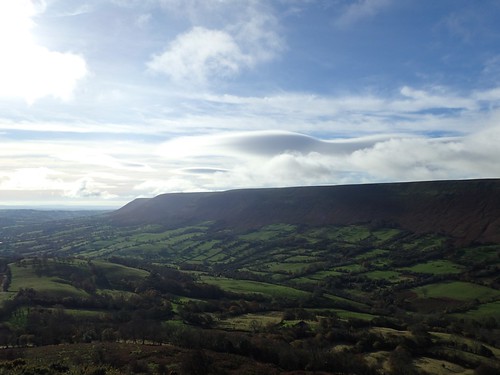 Across the valley to our left, the Hatterall Ridge that once formed a portion of Offa’s Dyke; a England-Wales border established by King Offa of Murcia in the 8th Century AD. As Mark intriguingly pointed out, this was around the same time that the Mayan civilisation would see its demise. 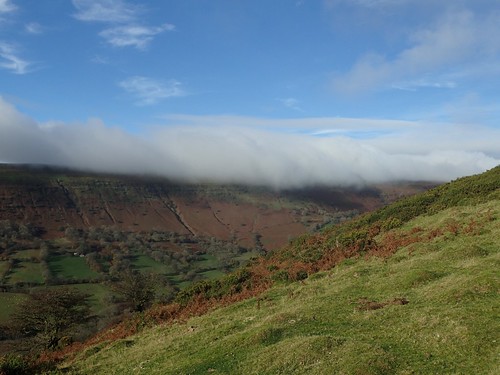 Already, our day had begun with much more colour and sunlight that I could’ve imagined for my first visit here, in December 2016. As we continued along the ridge of The Cat’s Back and with the wind speed gradually increasing, we could see cloud rolling over Offa’s Dyke, only to burn away before reaching the Olchon Valley. 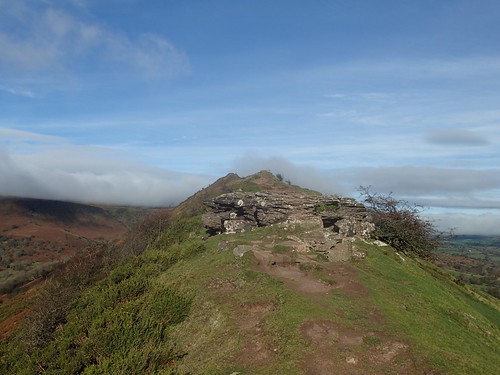 On my first visit here, I could barely see beyond the red sandstone rocks that line the ridge. 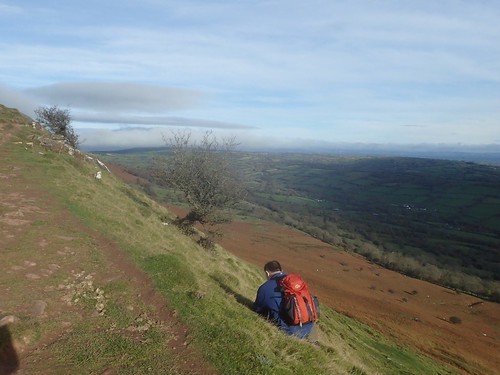 Knowing that we were to be exposed all day, we sought shelter from the westerly wind on the eastern face of the ridge. We drank tea and talked a bit; overlooking and appreciating Herefordshire.

We’d both packed our cameras for the day, with the intention of filming. Mark was more comfortable at doing this with close company than I was, which is why I shifted my video’s focus on to the wind and elements of nature. 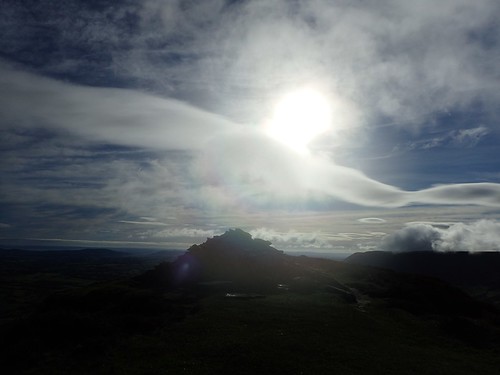 Returning to the ridge, we knew there would be a trig point ahead. These photos don’t serve justice to the wind speed… It must’ve been 35-40 miles per hour! On several occasions, I was almost blown off the path by gusts and, as I was informed yesterday; 40mph is the maximum that an average person can withstand.

But I did not feel in danger. This wasn’t Crib Goch, after all! I was confident in following the route without a map and I had good company. 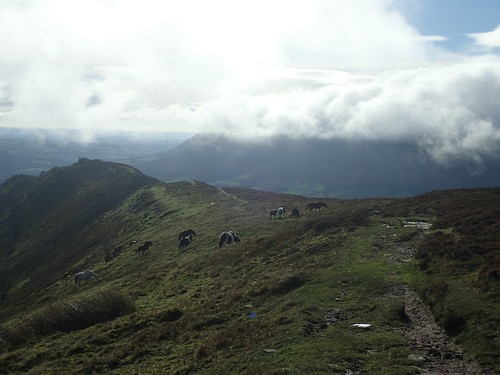 Looking back over our shoulders, I thought these scene almost resembled a typical view overlooking Machu Piccu in Peru… Minus the ancient building work and walls, of course. 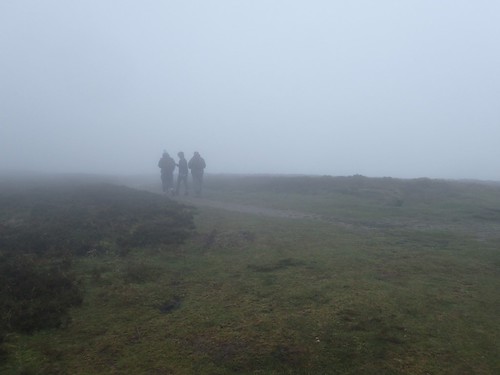 We didn’t stay at the Black Hill trig point for long (640 metres above sea level). It was far too windy for much at all and the westerly cloud passing over us was wet. Our vision of the sun long gone now, we marched on towards Hay Bluff. 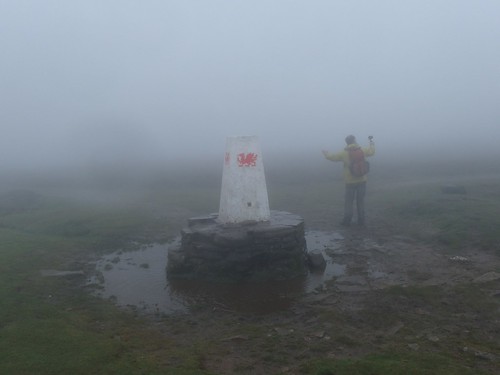 Upon reaching the trig (677m above sea level), we briefly met a trio of walkers from London. I was quite pleased that hadn’t decided to spend their day on Pen Y Fan, like 98% of other visitors to South Wales.

We took a photo for them and they took one of us, using Mark’s camera… Although waterproof, I’m guessing the quantity of droplets on the lens had a detrimental effect on the outcome of that shot. 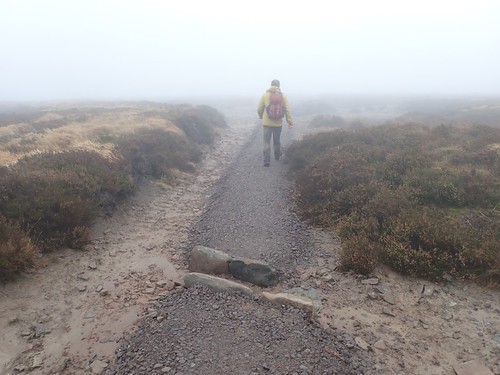 It was time to hit Offa’s Dyke and continue back along the next ridge. We passed a team of teenagers, possibly doing an intensive DofE challenge… Certainly, an experience they’ll remember with that wind strongly defying the pull of gravity.

If there’s a way for man to launch a craft or rocket in to orbit without having to fight gravity so hard, perhaps there’s an answer to be found in using the wind? 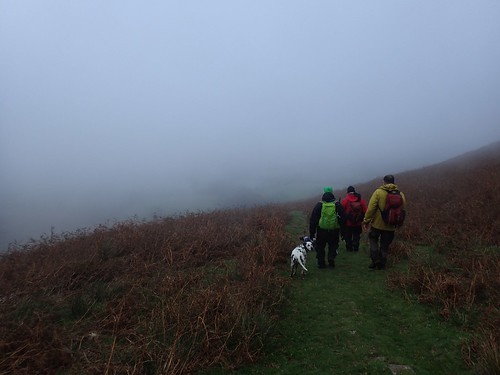 At a familiar ‘pile of stones’ and crossing point for Capel Y Ffin, we began our descent towards the Olchon Valley. Grateful for the gradual reduction in noise levels, as the wind began to pass over and not through us. One of these guys used to live in Bristol. Although, he was from the north and didn’t know of where I’m from. 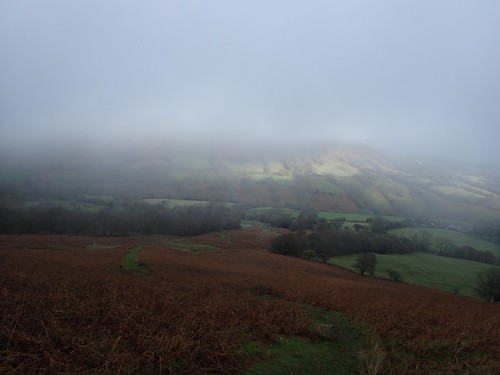 By now, the cloud had spread to cover the highest points of Black Hill. We paused for lunch upon reaching the road. 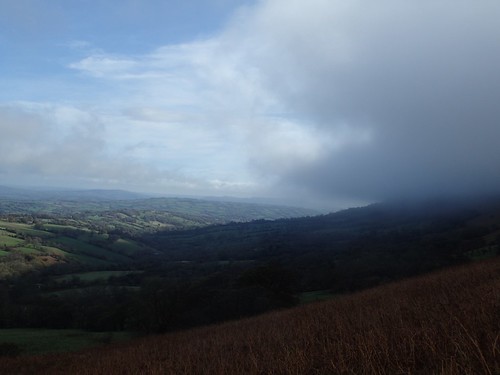 I’d heard people talk about walking in the wind and I thought I’d been exposed to strong weather on one or two occasions. But, over 600m above sea level, this was the kind of situation where many would alter their route or cancel altogether.

Physically, seeing the cloud roll over and at such speed… It was an experience, for me. 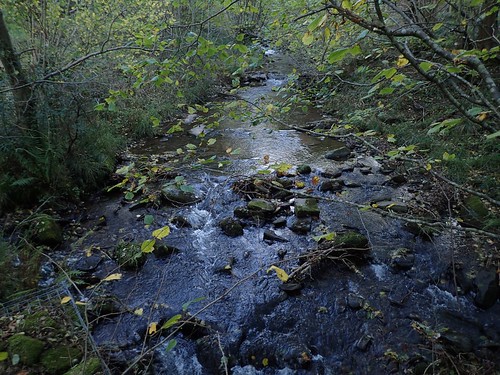 We continued down to the very floor of the Olchon Valley, where we met with and reflected upon the Olchon Brook. Calm. Quiet. Still, but for the natural flow of water.

Mark informed me that this brook runs in to the River Monnow, before then feeding in to the wide River Wye. From there, its journey returns to the mountains through evaporation and the cycle goes on.

Someone recently asked me to consider a world without water… My simple answer was, that I couldn’t. It is the source of life on our planet. 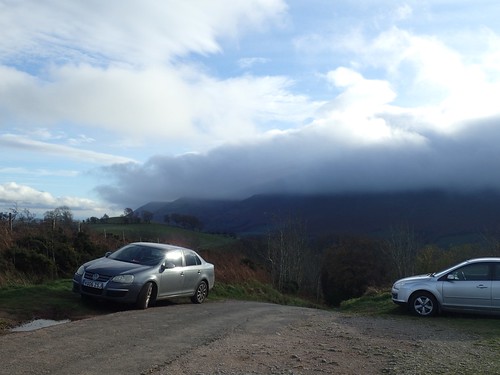 Climbing steeply uphill, we’d soon return to the car park at Black Hill. I noticed a man in a soft-top car pull up, leaving his wife in the passenger’s seat… He bought the camera out with him! Very proud, I assumed!

He then proceeded to start the engine and move the car for a fresh perspective… I was hoping he’d realised his car was obstructing his view of the mountains but, if anything, he probably wanted to Photoshop the ridge away in favour of more sky! 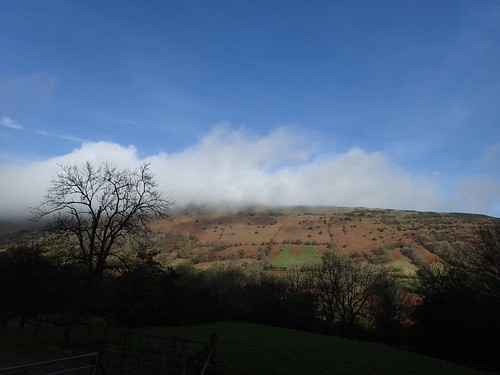 I enjoyed meeting Mark, walking with Mark and we’re talking about doing more together in 2018. We’ve both uploaded videos from our day and it’s probably easier if I document that in a separate post.