I’ve been wanting to write a post about this for a little while, as I want this blog to become something more than a series of ‘I walked here, this is what it looked like and this is what I found’.]

For this example of how I plan a walking route to follow, I’ve selected the area of Cranborne Chase on the North Dorset/Wiltshire border.

Please note: all images are taken from OS Maps, without permission.

This isn’t just an exercise in plotting lines on a map, which is something I do often. I’m using an example that was required for a group camping trip in July of this year, when I led this walk on the final day of our long weekend.

My route was to be set in the area of Cranborne Chase – although, technically, it might actually have crossed the border in to Blackmoor Vale. Aware of the other routes being led over the weekend, I was able to narrow my selection down to a more specific space within the region. 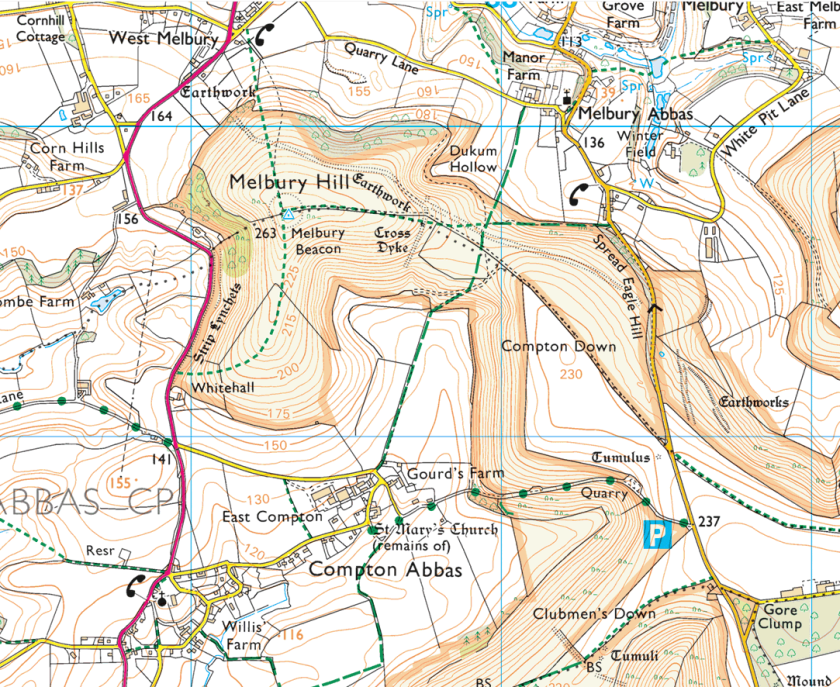 Typically, the first thing I’ll look for on a walk is at least one point of interest. Quite often, I’ll be heading to an area to explore said interest. On this occasion, I was given the place and had to plot something out to fit. 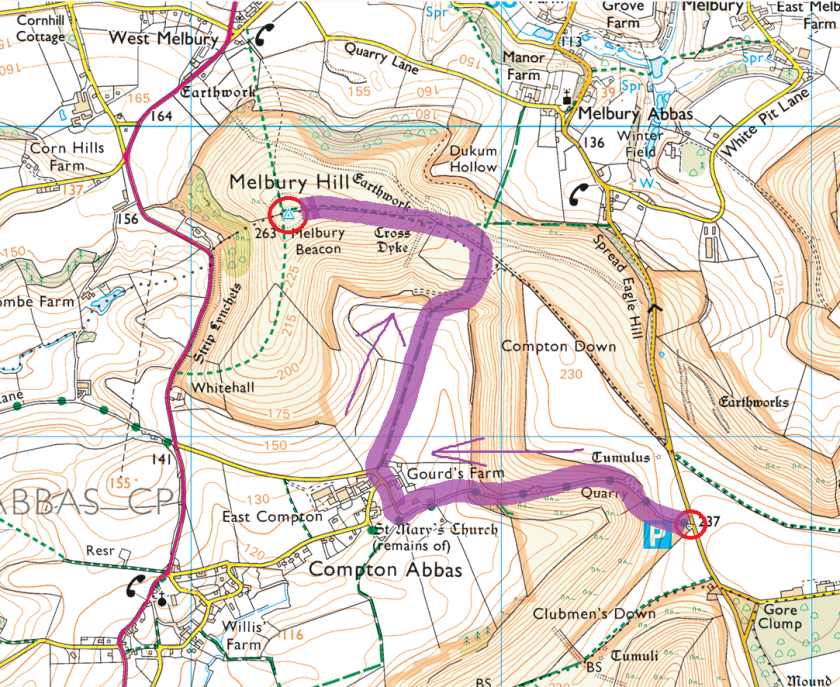 Above, I’ve circled the trig point (triangulation station or pillar; blue triangle) on Melbury Hill (Melbury Beacon) and I’ve also circled a car park (blue P), with a likely route in purple that connects the two.

I do like climbing to high points and discovering trigs so, this is a definite feature of interest for me. Once I’ve found a potential car park, I’ll often try and view it on Google Street View to gauge its size. If it’s near a built-up area, I’ll used Parkopedia to check for pay-and-display costs.

I was satisfied with this being the start of my route and so, moving on to my next point of interest (Compton Abbas Airfield), I can continue to plot my route (purple line) – I’ve actually plotted the entire route, here.

I’d also like to just mention that the main basis for this walk came from someone else’s route, which I found using OS Maps. 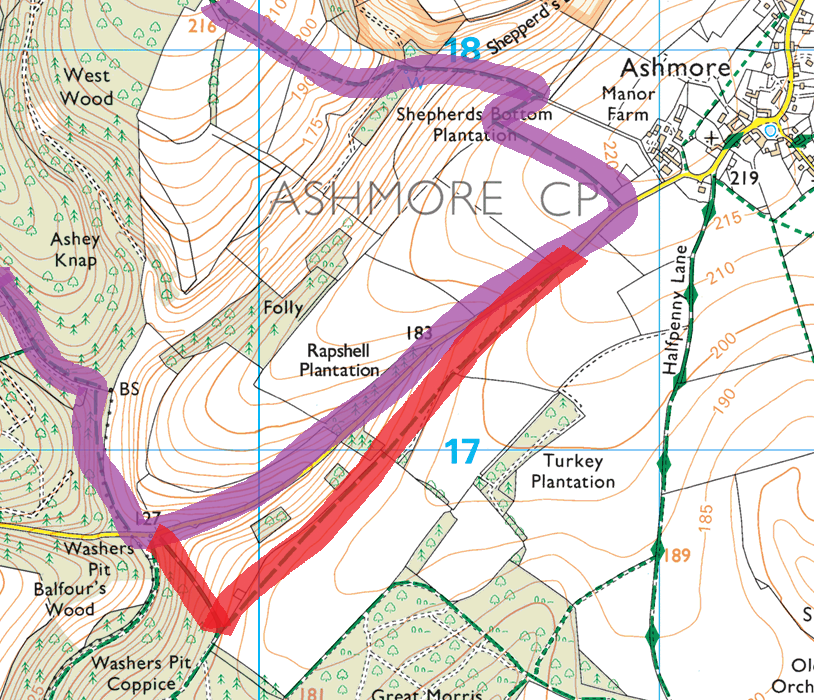 In purple, above, I’ve highlighted the route we walked. In red, beneath that, you can see a public right of way that could’ve been used to reduce the amount of road walking and lead us to the same point (at the time, I misread the contours and thought this path was climbing up and away from the road).

I’m not a great fan of treading on tarmac and try to minimise it where possible. Sometimes, it is unavoidable. 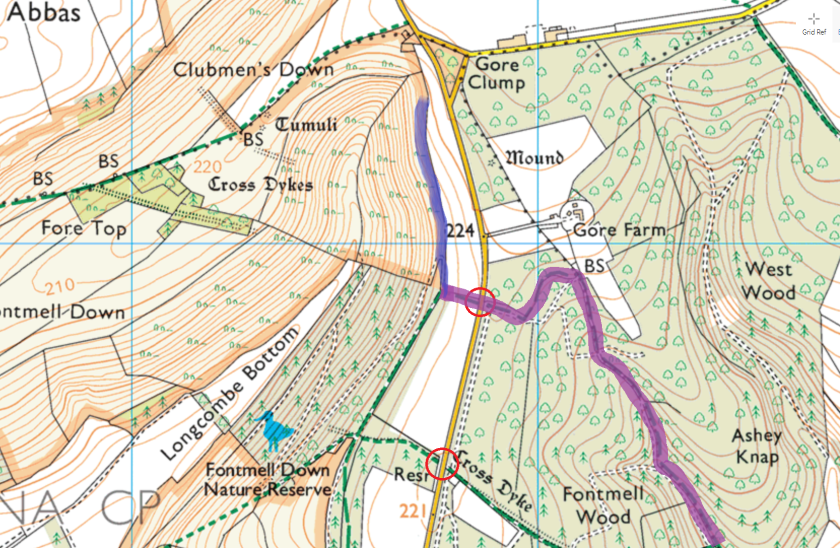 Wherever you see an orange border (above: Clubmen’s Down, Fore Top, Fontmell Down), this designates Open Access Land; space within which you are legally free to roam, without crossing the boundary.

In red, I’ve circled two possible points for crossing the road – where my initial plan had been to follow this road northwards… But, I soon realised this is a particular busy road. I could see a green public right of way (footpath) running to the corner of the Access Land boundary and took a gamble on being able to pass through here… Which paid off, as kissing gates were in position.

Sometimes, this may not work out. Within the confines of Open Access Land, you’ll often find paths on the ground that are not marked on the map and vice-versa. 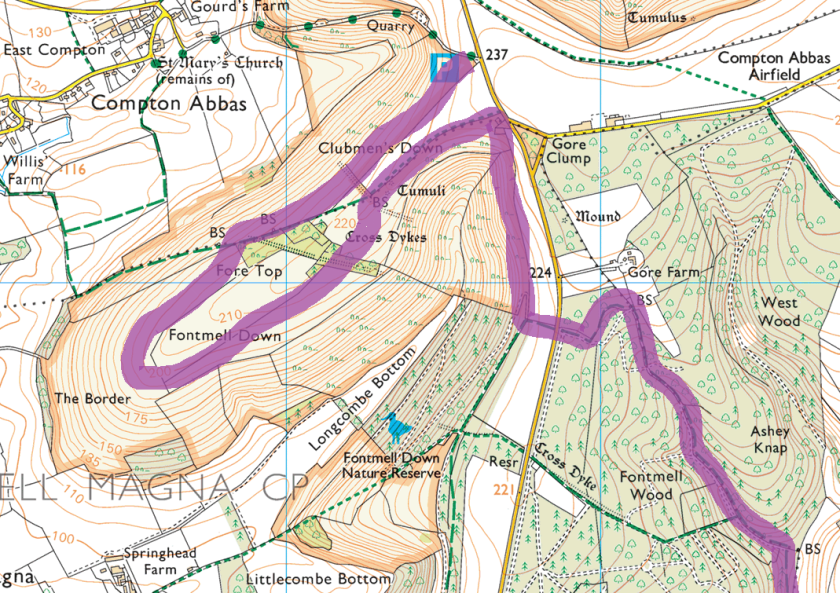 So, roughly follow the contours around this downland, I could plot the final stages of my walk, leading back to the car.

Particularly when leading a group or walking with company, it’s important to have a place in mind for post-walk refreshment. This may be a tea shop or café. But, in most instances, it’ll be a pub (blue sign in the photo above). A quick Google search will alert you to its availability (many pubs around the UK are going out of business) and I have, on a very few occasions, found drinking holes and establishments that don’t feature on any Ordnance Survey map.

I do recommend paying the annual subscription fee for OS Maps, as you can plot walks, receive an accurate distance calculation, save your best routes for later and even print out your routes so you don’t necessarily have to buy a new map or carry several and switch between them on a walk.

(Sadly, I’m neither sponsored or endorsed by Ordnance Survey. These are my own words, based on my own experiences.)

I hope this is helpful to you and I welcome all comments and questions below.