Our long weekend in Pembrokeshire had begun. It was Friday morning and we were all looking to get our boots on.

Three levels of walk were available to join and I picked the one that sat in the middle: not too long, not too short and, in stark contrast to the rest of the weekend; not following any portion of the Pembrokeshire Coast Path. 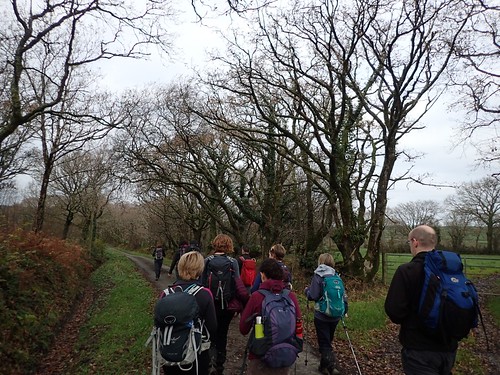 We would all coverge in the town of Narberth and I managed to get their, from my own accomodation in St. Florence, without resorting to digging a SatNav out from the boot.

Narberth. No, I’d not heard of it either and still, I’m not sure I even know how to pronounce it. But to park there for the day costs us only £1.30 each. I’ve also since realised, through the powers of Facebook Stalking, that a guy I used to work with over a decade ago now, lives in Narberth… I wasn’t aware of this at the time of our walk but I would’ve recognised him, had I seen or heard him.

I wonder what provoked the move, so far from North Somerset?
He’s only in his fifties. 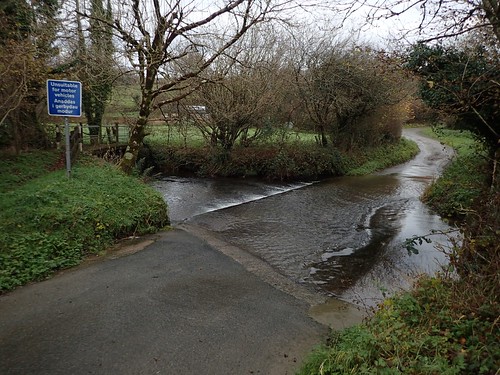 While I cannot be certain of the exact route, I believe we began by walking in a westward direction, with the aim to heard north-west and on to Llawhaden.

We must’ve seen a lot of rainy in the week or days leading up to this, as the water content of this landscape was higher than on many walks we have endured. There was one field (very marshy and deeply rutted) where two people sank or fell to their knees and then got their arms in a state, as gravity took hold and showed them to their seats (I wasn’t cruel enough to take photos). 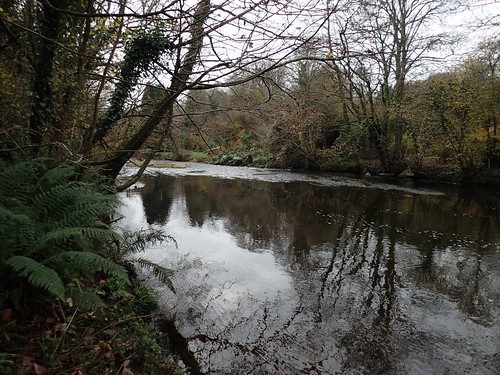 In the next field, a few people decided to sidle along a barbed wire fence while others (myself included) took the “less muddy” route (it wasn’t), stooping beneath tree branches along the way.

Eventually, we all survived to make it across the A40 and on towards Llawhaden (which, I realise now, I’ve been spelling incorrectly). 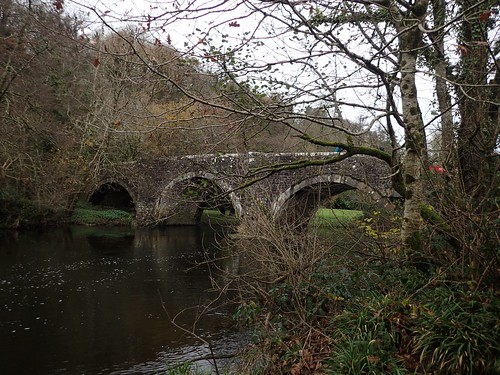 We made it to Llawhaden Bridge, which crosses the Eastern Cleddau. 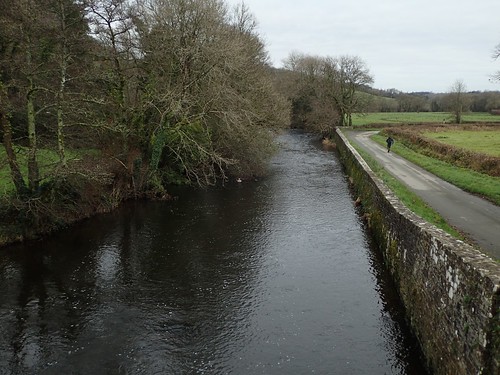 As soon as the group photo opportunity had arrived, Matt was running off in a different direction, in full pursuit of what was probably (or not) his first GeoCache of the day. 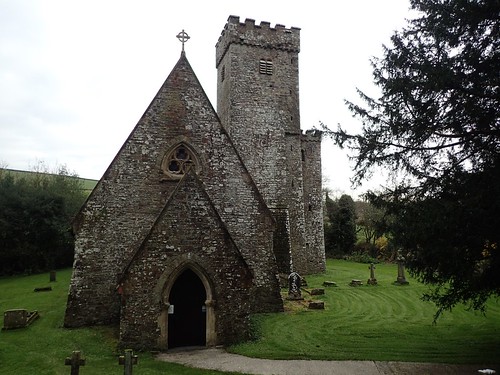 We walked up the road to this interesting church. Admiring the view, moments before turning to realise we were due to climb the forty-five degree slope behind us! 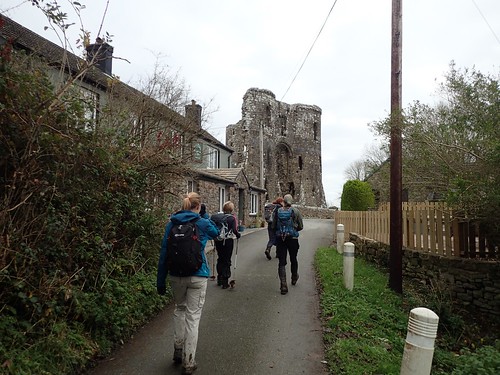 From the top (and there was a top… Eventually), we were within reaching distance of Llawhaden Castle. 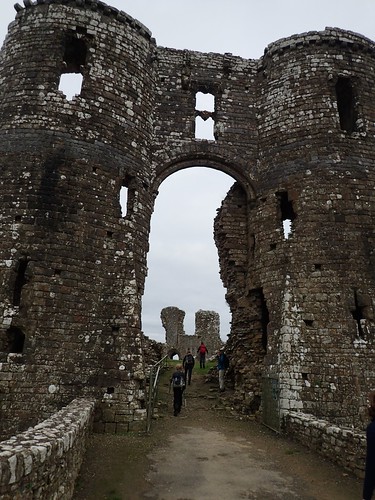 We would eventually stop for a short break within the castle grounds but we also had plenty of time to explore the ruins – for which there is no admission fee. 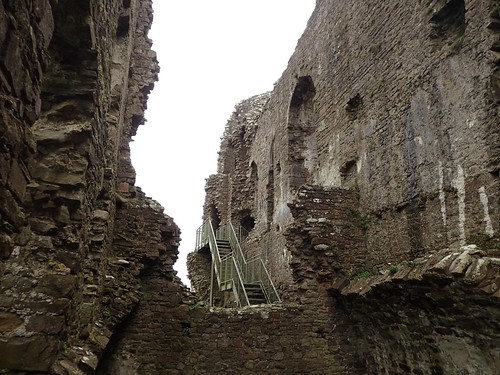 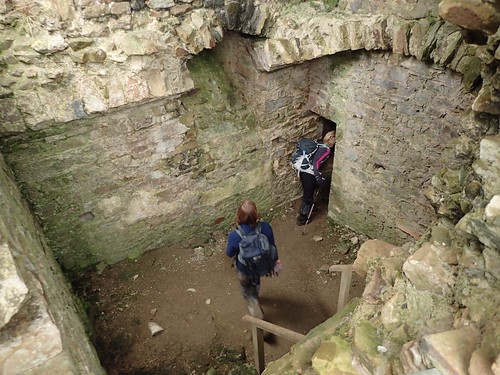 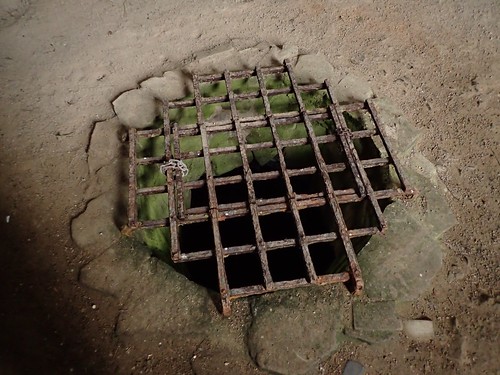 From the tops of the towers to the bottoms of the… Dungeons? There was an awful lot to see, here. 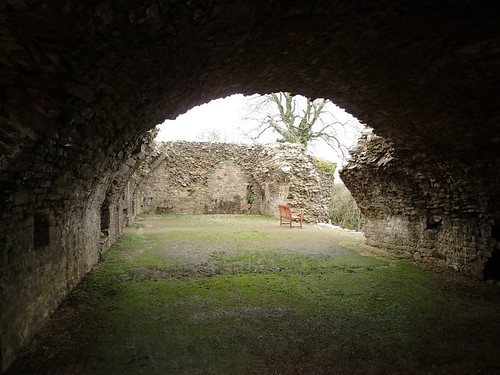 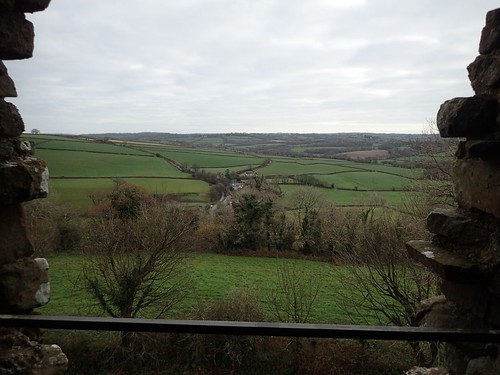 Some of the views from the castle’s towers weren’t bad, either. We appeared to have settled within a relaively flat portion of Wales.

As enjoyable as this visit had been, it could only remain brief, as we were no more than halfway around our route at this point (if, even that) and we would be moving on with a lunch stop in mind. 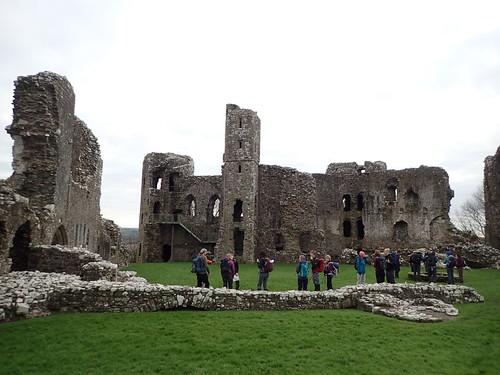 From the castle, I can see that we would’ve been heading south towars Canaston Bridge (one of the many English-sounding place names within Pembrokeshire). I reckon we joined the Landsker Borderlands Trail; looking at the contours of the landscape; remembering the cows and then Matt’s most impressive GeoCache find of the day, that involved opening and locked box and diving in for a Lucky Dip experience (we all watched). 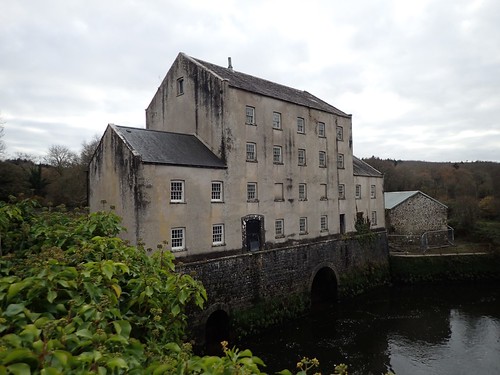 We’d have our lunch sat on Blackpool Bridge, with Blackpool Mill in view and the Eastern Cleddau again, beneath us. 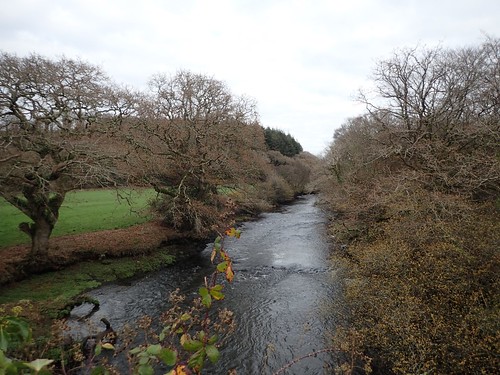 It wasn’t raining. It wasn’t sunny either but Susannah’s home-made chocolate brownies made up for the lack of colour in the sky! 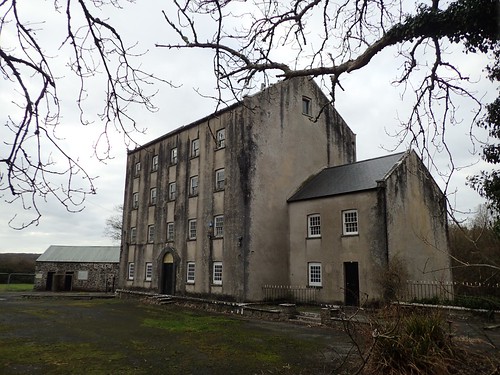 From what I’ve read, Blackpool Mill has been closed for some time, even though it is still highlighted on the latest OS map as a museum or attraction. Proposals to revamp the site in to a fresh attraction were ‘deferred’, earlier in 2017.

I don’t remember too much about the return route but, with all of the woodland walking that entailed; I estimate that we followed the Knight’s Way, over the A4075 and and on through Canaston Wood. 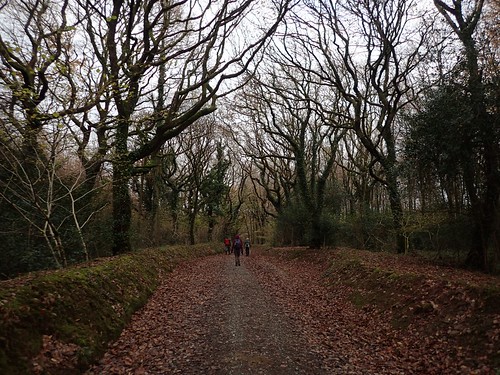 There’s a point just east of the woods, labelled as ‘Captain Style’. I wonder what we might’ve missed? There’s also ‘Narberth Mountain’… But it’s not even 150m above sea level.

Twelve miles under our belts, no battering from the cross-Atlantic wind and it was a decent warm up for the coastal walking that would follow.