Walking the Severn Way, from Oldbury-on-Severn to Berkeley, via two nuclear power stations.

In my previous post, I signalled an intention for 2018; to walk more of the Severn Way long-distance footpath.

This is a walk from early December, when I first put that plan in to practice. In this post, I’ll share the route along the Way. In a future post, I’ll show you my return route to complete the circuit to my car. 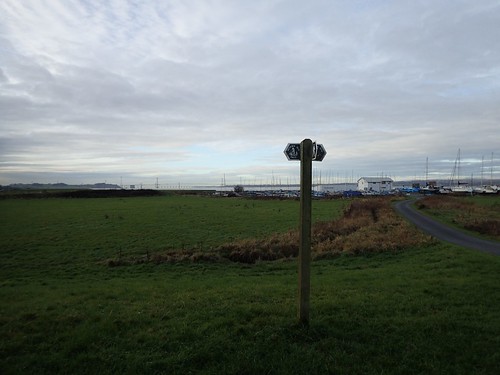 Essentially, the Severn Way is a 210 mile long-distance trail that begins in the city of Bristol and follows the River Severn; from the estuary up until its source in the Cambrian Mountains of Mid Wales. Parts of the route are open to cyclists. 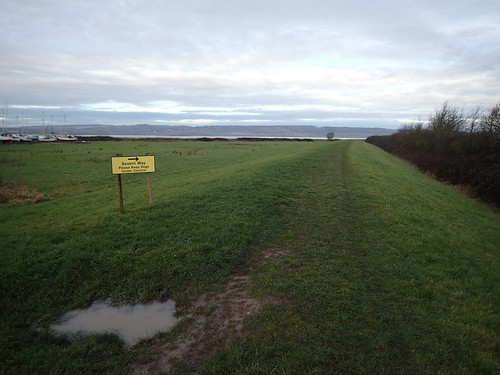 It’s a local trail that I haven’t walked very much of. Typically, I’d rather head to the hills and explore the Cotswold Way, for example. Up until this date, I’d only walked a short stretch between Severn Beach and Aust, south of this location and another short stretch further north, near Deerhurst.

Through the power of Google StreetView, I’d found that the local pub in Oldbury-on-Severn (The Anchor Inn) has a very generous overflow car park on the opposite side of the road. There were no ‘patrons only’ signs and so, this was where I left my car. 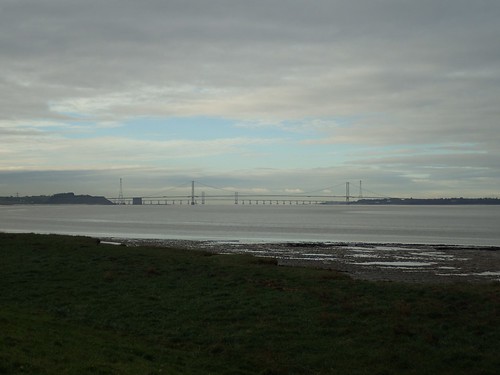 I made a hash of my first steps on to the Severn Way; deciding that what would turn out to be the right path was actually the wrong one; only to scrambe up through a bush, thinking about a toilet break and arrive face-to-face with the dog walker I’d passed ten minutes earlier! 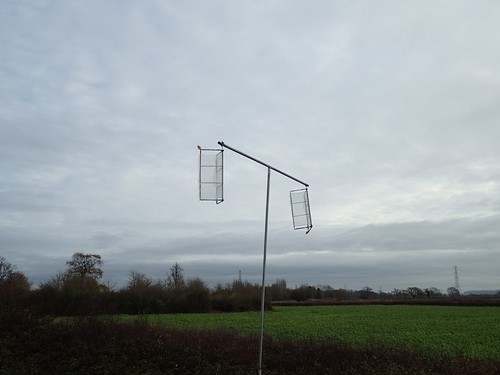 Heading north and far away from both of the Severn Crossings, I was walking en route to Oldbury Power Station… A NUCLEAR power station! Again, I found myself staring at a pair of lampshades and wondering:

‘How are these supposed to warn me, in the even of a radiation leak?!’ 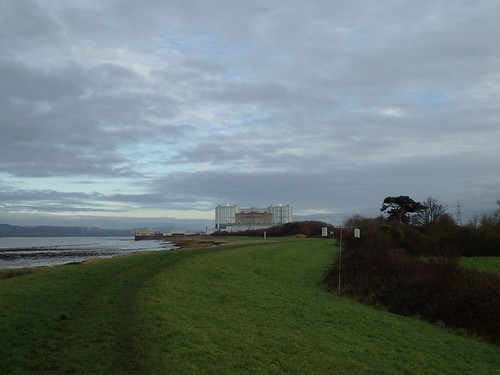 I could only presume that it was safe to walk on, as thoughts of the ridiculous Hinkley Point “Coast Path” Diversion came to mind… Being watched by the Police; walking endless miles around a construction site and then followed by vehicles from inside each compound. 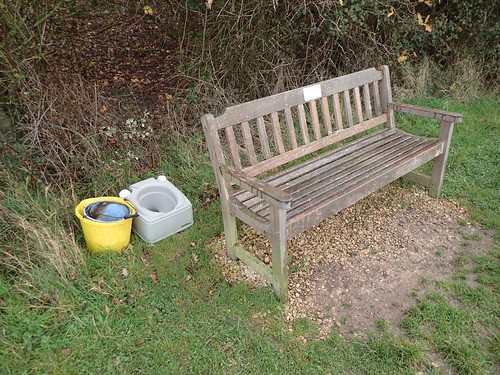 To my surprise, the opportunity a “comfort break” arrived when I found my first bench. I’d only been walking for twenty minutes but I wasn’t preapred to sit down… Especially here, where it looked like someone else before me might well have!

There’s somewhat of a story and history to a series of power stations that adorn the Severn Estuary. 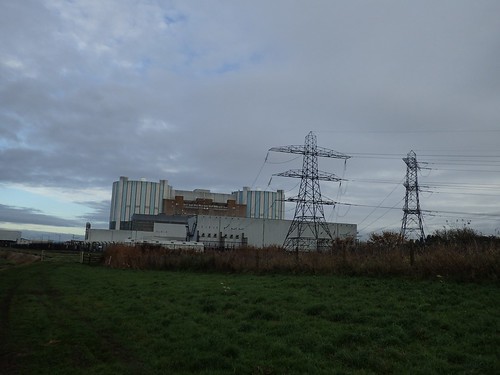 Oldbury Nuclear Power Station was closed in 2012. It was up and running for around forty-five years and, at its peak, could provide generate enough electricity to power a city twice the size of Bristol, on a daily basis.

There were a couple of reported incidents in 2011, ahead of the closure and that latter announcement that Hitachi had purchased the site. Plans to build a new reactor here have been shelved, while the original two remain dormant, having reached ‘the end of their operational life’.

My first question, of course, was:

Why are we progressing with Hinkley Point C, again?!?

But, even wind turbines and solar panels are made from components with finite lifetimes. In the future, pieces will need to be scrapped – and, most likely, burried underground. Sometimes, I feel disgusted, to think of the truly ‘throw-away society’ we’ve created. 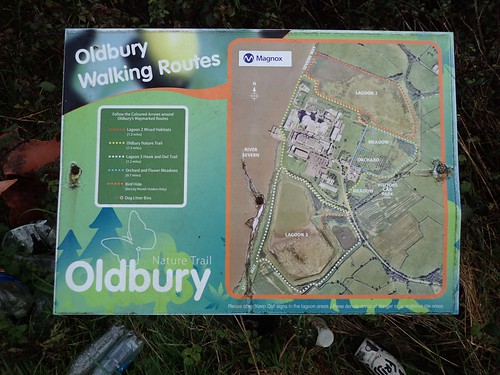 Politics aside; Oldbury’s Power Station is far more inviting than its successor down in Somerset. Magnox have not only kept these paths open but provide a clear and easy-to-follow map to guide you on short walks around the pools. 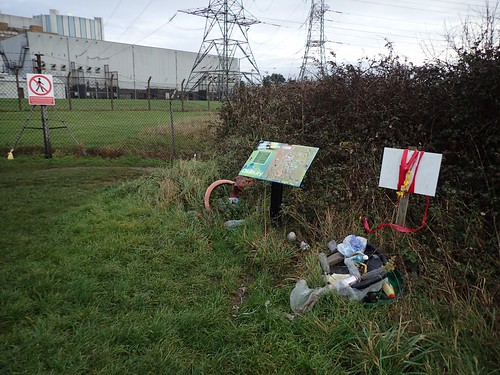 Otherwise, people have made a typical mess of this area. We do not deserve the Earth we walk and breed upon. 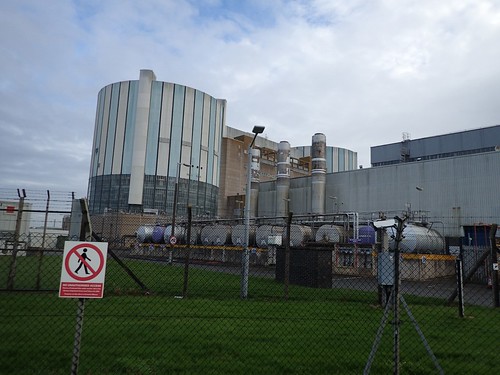 Cameras and warning signs appeared to be active but I couldn’t hear a sound or see a single soul beyond the security fencing. 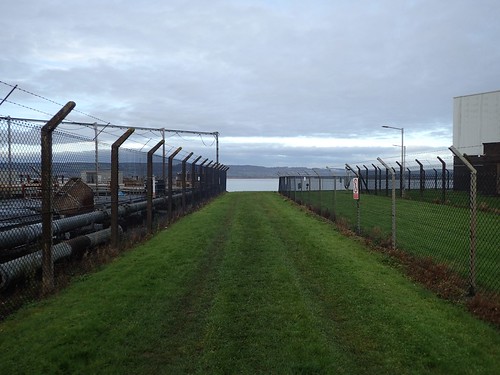 Best of all: there was no restriction on following the right of way. I hope all of the coastal walkers who’ve passed through here before me have received an equally untroubled experience. 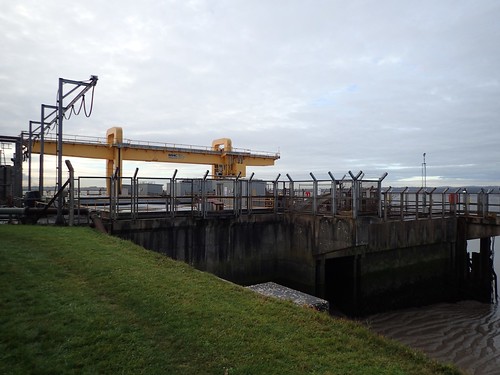 We’re talking six-years since the reactors were shut down… Yet, I find it hard to believe that nothing could go on here, as everything looks to be in very good condition, as far as my own eyes can see. Although, I did pass through on a weekend. 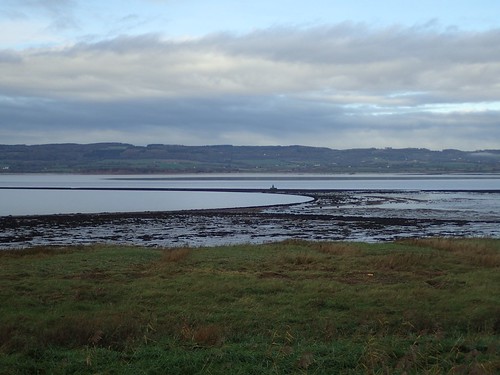 While a portion of this area provides a landscape for bird life, Magnox have created a ‘tidal reservoir’, which I presume was once used to generate power. I do think it’s a great shame that our ignorant government turned away from the possibility of creating a tidal barrage. 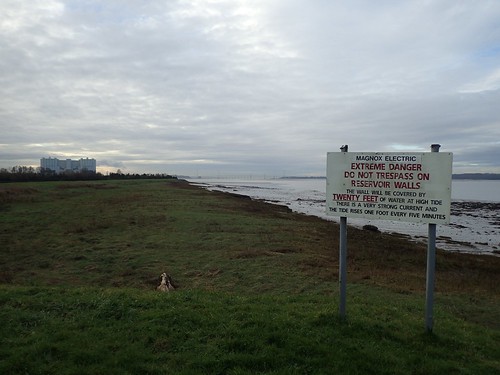 Close to the mouth of the River Severn, the water is around 3km wide. Our moon would do the rest!

I can only assume that other (hopefully) renewable sources of energy have since been installed locally. 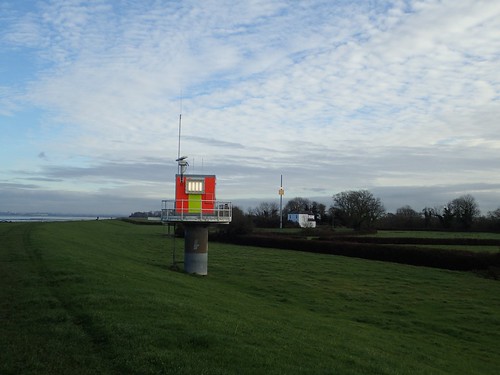 Walking in a north-eastward direction towards a landmark known as White House, I passed this radar-like device that also appeared to be solar powered. The only one of its kind, that I would see all day. I wonder what its purpose could be? Again, it looks modern, clean and maintained. 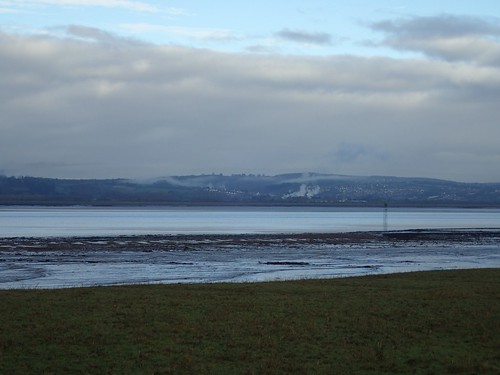 Across the river from here, the Forest of Dean sits on the horizon. A plume of smoke along the shoreline follows the run of the steam railway line, running from near Chepstow, up through Lydney and on towards Cinderford.

I could also hear the occasional bang. One man and his shotgun? There’s no suggestion of a miltlary range on the OS map. 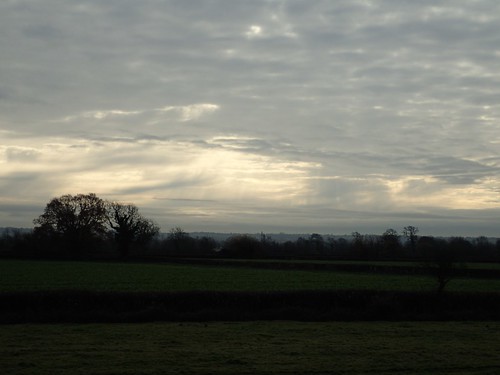 Looking inland and to the east, I could see what might’ve been my return route. 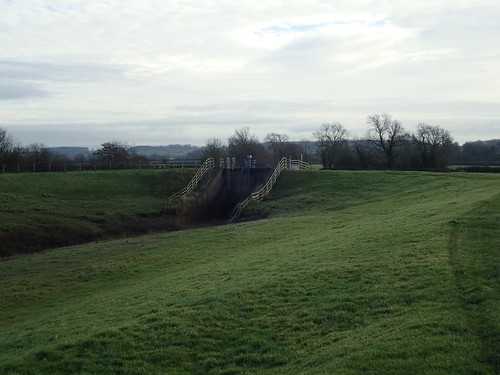 I came to cross over a sluice. After which, I would sit down and have something to eat. These sluice crossings and becoming increasingly important in allowing public access around the entire England coast. Many sluice gates remain private, where they may provident the most efficient and close-to-the-coast access for walkers and cyclists alike. 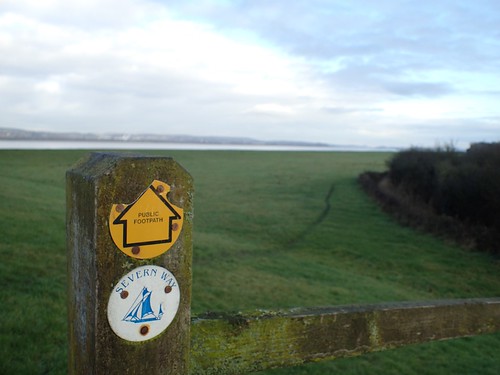 Some of the original Severn Way markers remain. Although, it’s hard to go far wrong when you’re walking beside a river. 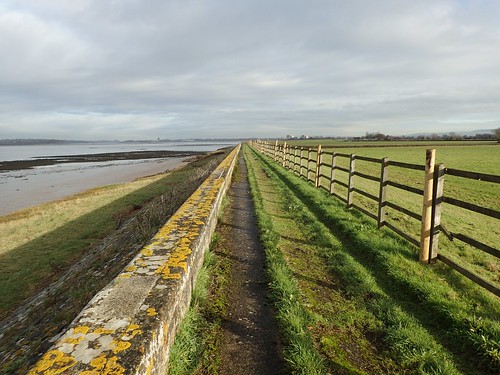 This was a day in which the sun was shining. Leading to up this, the temperatures had been low. I was astounded by the complete absense of wind on this walk. So calm and unlike walking the British coast. 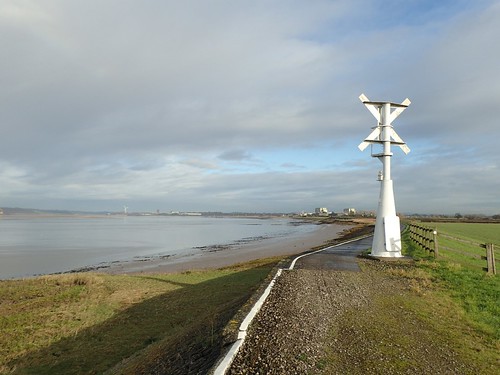 Ahead of me now, was the next nuclear power station and, further up the coast from there, the docks of Sharpness. 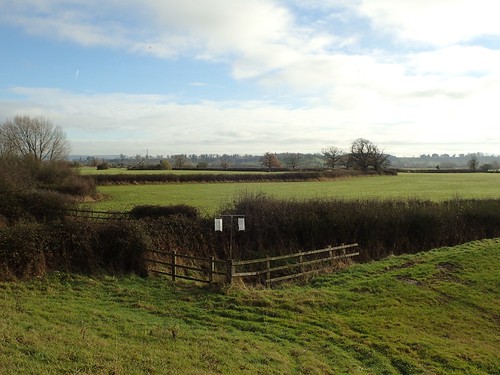 Again, I passed that familiar-yet-baffling sight. 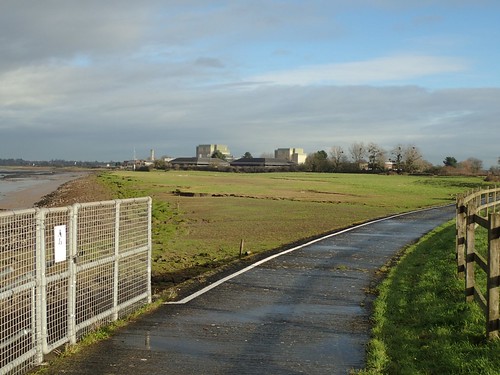 This is Berkeley Power Station, which was closed as recently as… 1987!

It was operational for no more than seventeen-years – thinking about it, that’s the same as my dog, Katie… Not very long at all, for something that must’ve required considerable investment. Now, it remains in the process of being “decommissioned”. One day, once the radiation levels have dropped significantly, we may find that the remaing materials are removed… And sent to landfill, of course.

This nuclear power station would’ve been able to supply a city the size of Bristol and no more. Once again, I found myself wondering why on Earth we’re investing in Hinkley Point C… I don’t know the specific differences between Hinkley and the two power stations I passed on this walk but, I am under the impression it will not last forever. 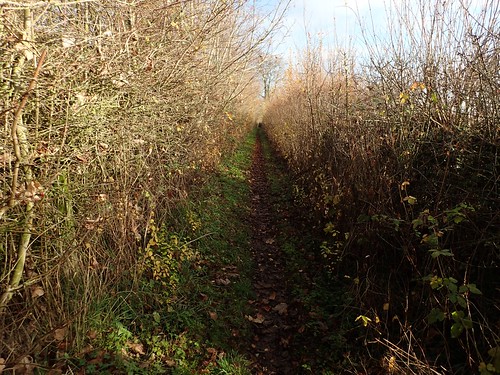 There’s no access whatsoever to the water-side of Berkeley Power Station and the Severn Way turns inland, here, to curl around its perimeter. This tree-tunnelled route is reminscent of the footpaths near Hinkley Point A and B. 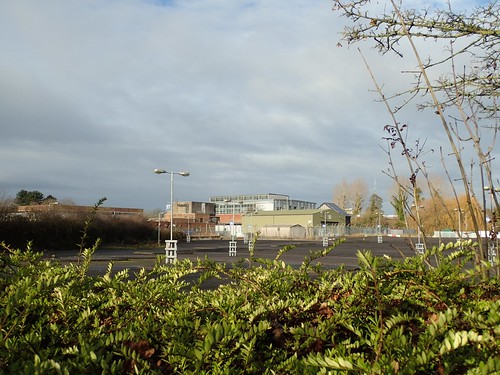 There’s now a leisure centre and, from memory, a training facility, to the east of the power station. 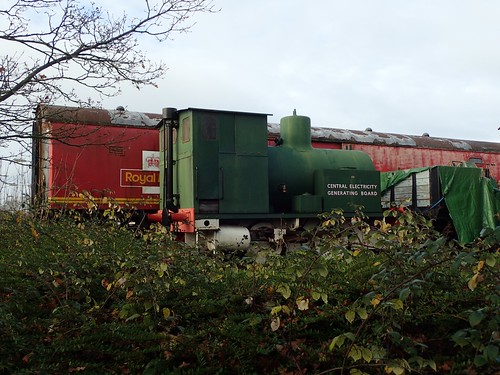 I also found a place for retired Royal Mail trains to rest. 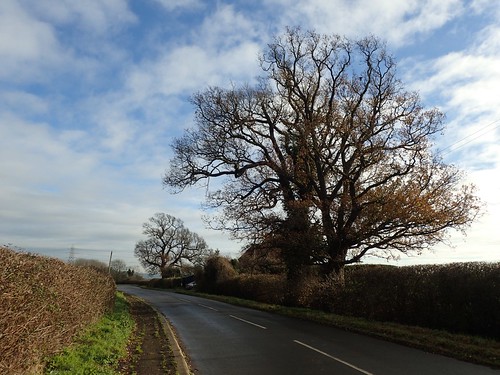 Now, I was on a pavement, following the roads in to the village of Ham. I’d way goodbye to the Severn Way, for this outing, where the road bends on towards Berkeley at a junction.

I’ll show you my return route from here in a separate post. I also realise there’s a stretch of the Severn Way south of here (between Aust and Oldbury) that I’ve not yet compleleted. I have already plotted routes passing Frampton-on-Severn and I intend to walk those soon.