One week earlier, I was exploring the coast path and countryside of Pembrokeshire.

In stark contrast to that, I decided to head south and for a partly-familiar walk in Somerset, following a small portion of the official England Coast Path, as opened in 2016. 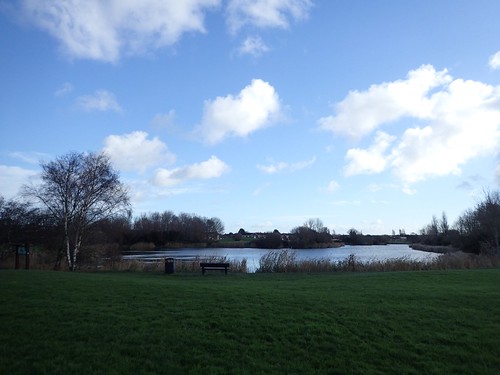 I left my car at Apex Park, to the south of Burnham-on-Sea. 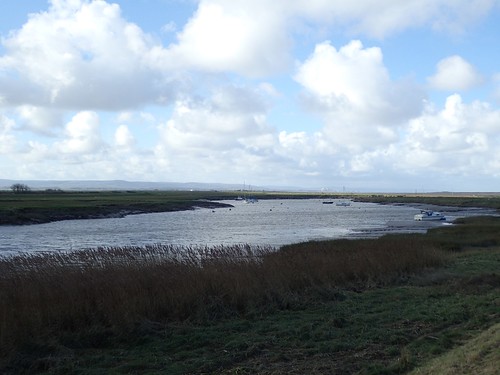 From here, I could soon join the coastal route and cross over the River Brue. 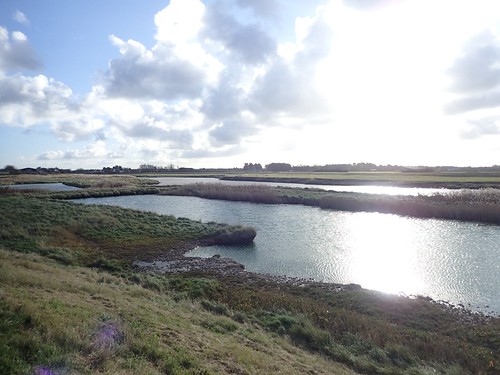 We must’ve had considerable rainfall in the days leading up to this outing, as the pools beside the main river were of a substantial size. 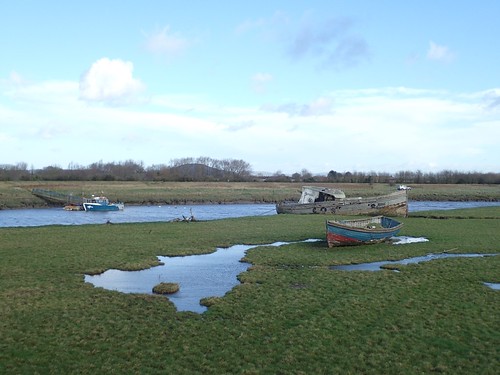 Even with the added rain, many boats remained moored upon the bank of the river. 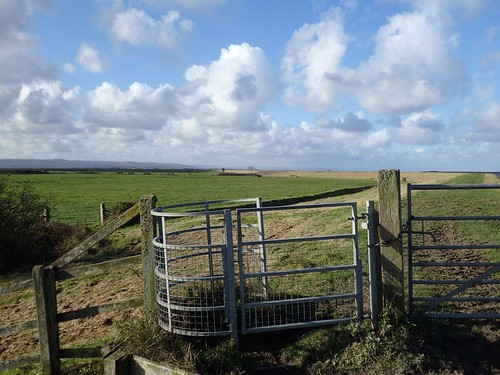 Soon, I was heading west along the southern bank of the Brue; soon to escape the dog walkers and sounds of passing traffic. 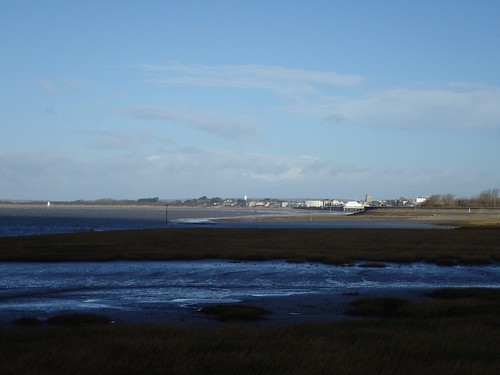 Burnham-on-Sea begins to fade in to a distance, away to my right. I’ve walked this section of the coast path at least once before, with Anna. I felt good to be back here and, more importantly, to be outside. My week leading up to this had not been an easy one, coming back to everyday life after a long weekend in south-west Wales. 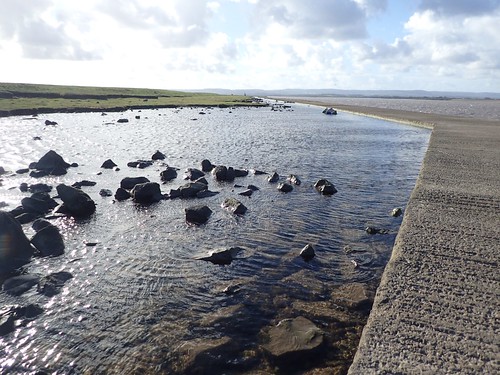 From the estuary with the Severn Channel and the Brue, the path soon follows the River Parrett towards Bridgwater. Officially, the public right of way follows the grassy bank. But, when the tide is out, it seems possible to walk along this concrete way and stay closer to the water. 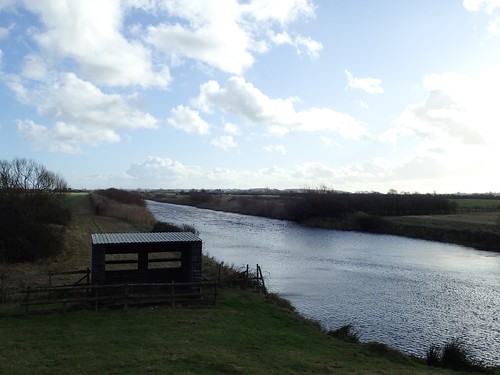 I can recall the winds as originating from the Arctic Circle, on this day. Bitterly cold and discouraging. 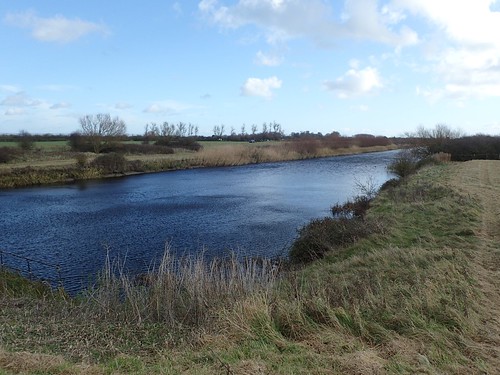 I would leave the coast path after crossing the Huntspill River, which you can see in both photos, above. I did sit down here, for a brief bite to eat. But, while the view was welcome, the wind still found its way through and around to me. 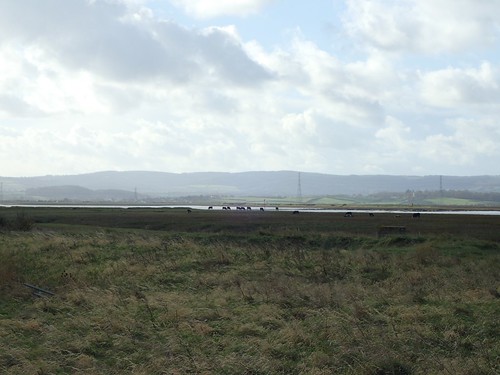 Further south and west from here, you can see the Quantock Hills. 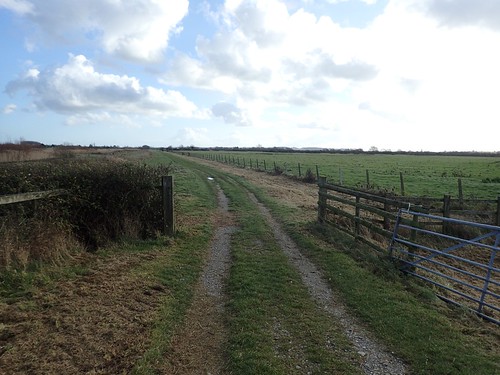 There’s no public right of way on either side of Huntspill River, according to the map. But I have, over the past year, learned that you are allowed to walk beside it. This is one of those that you gain only by getting out there.

I passed a younger man who was tracking back and forth, looking for his keys. I hadn’t seen them but kept my eyes open as we walked on… I do hope he found them. I have a ‘ritual’ where I always check I have several items (keys, phone, camera, wallet) before setting off from a stop point. 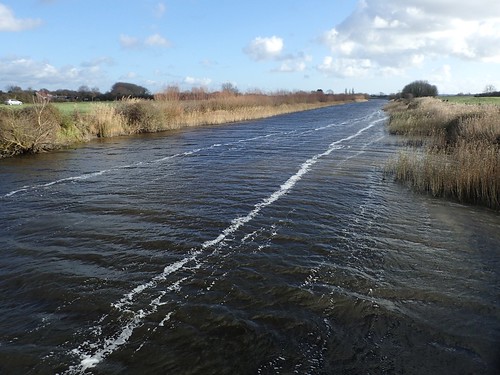 At the next road, I would arrive at Sloway Bridge. Peering over the side, I could see long waves running parallel to the river, caused by the wind! 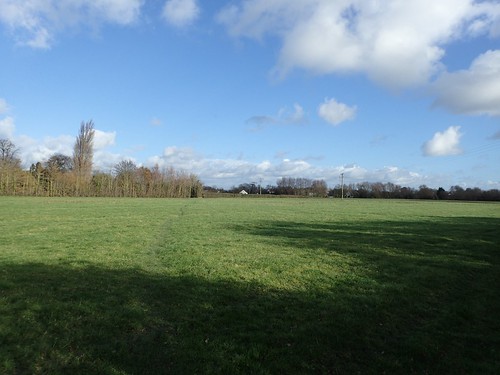 Past Laburnum House, I would follow a right of way across a field and on towards the village of Huntspill. I had anticipated the markings of remnants of cows, if not their own presence at this time of year. But, I was pleasantly surprised to find green open land. It may even be a popular route, as the way was quite clearly worn in through the grass. 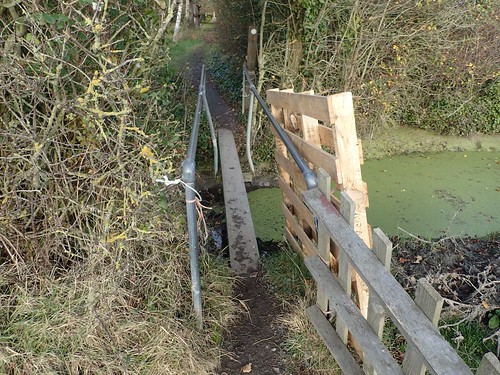 Before reaching the church, I would have to have to cross a rhyne along a rather perilous-looking bridge… I think the pallet is there as an emergency aid in the need for buoyancy. 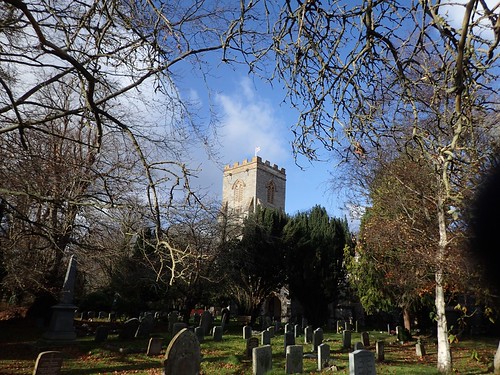 My memory tells me there was a sign to indicate an art exhibition inside the church. My boots were covered in mud, along with my gaiters and I knew that rain had been forecast. So, I walked on. 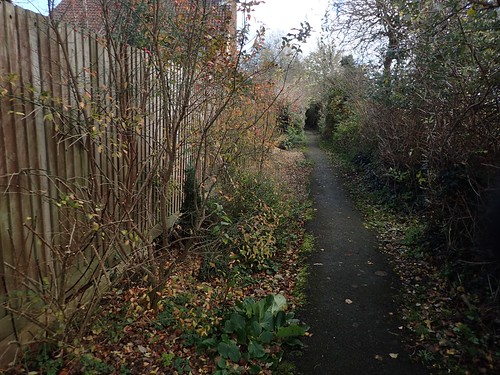 I was pleased to find the footpaths so easily identifiable through this area. I often struggle to navigate my way around and through built-up spaces. This fenced walkway was far more welcoming than a stretch of the England Coast Path that I’ll share with you later. 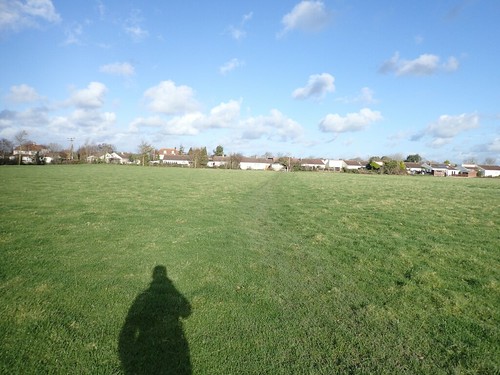 On to the next two fields and more green space! I was no more than 200m away from the A38, here. Cows lay in an adjacent field to my left, with a line of house acting to muffle the noise.

I wonder, with the government’s intention to build on green land, could this open space soon be under threat of unaffordable development and more ‘executive homes’? 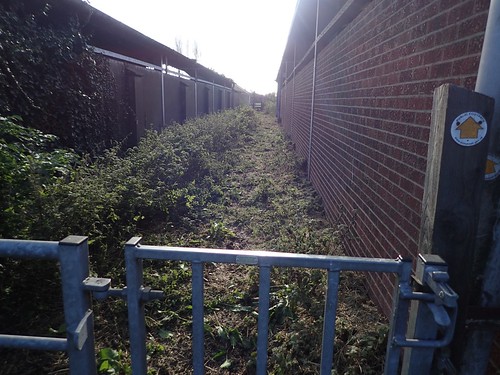 Walking on to Maundril’s Farm, I was pleased to find the right of way both clear and easy to follow, as I walked on through. I’ve hard far less successful experiences with farms in several corners of Somerset. 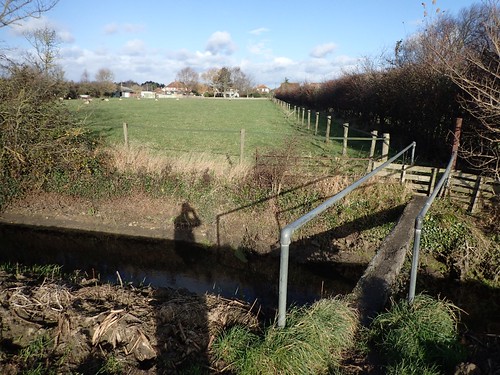 Another rhyne crossing awaits, with a further green field beyond. Having driven up and down the A38 in this area so many times, I never would’ve expected to find this. 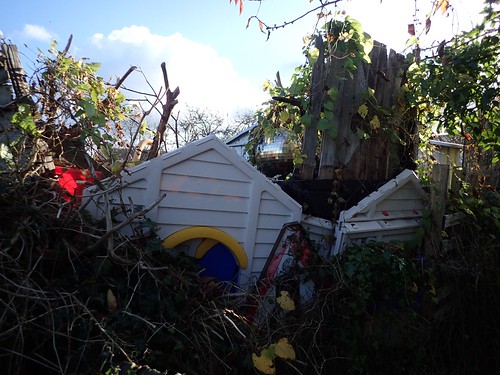 Not everyone in Somerset dumps their rubbish on private land. When the kids of grown up and you come to accept that disco is dead, you can make an interesting feature of your garden and replace that broken fence. 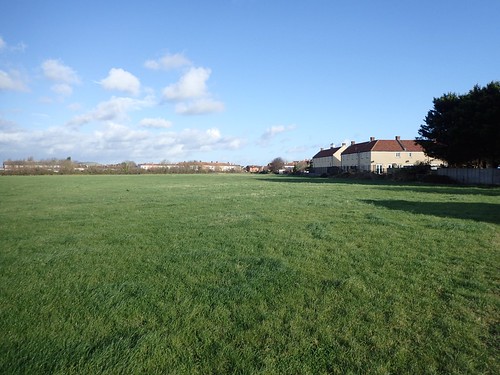 One last green space before I would look to cross back over the River Brue and retrace my steps along the coast path in to Apex Park. 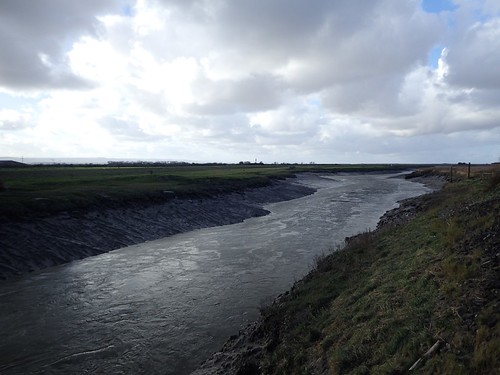 At no time of day, could this water look inviting. 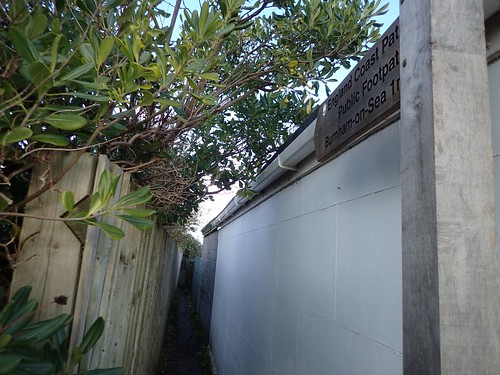 So, walking north from Brue Bridge Clyce, the England Coast Path follows this shoulder-width alleyway between housing and a sewage works. I’m pleased to say that I’ve not yet met anyone coming the other way. It was an official right of way before the coast path was designated; I don’t know what I would do, if I have to give way to even on other walker!

I wonder, could this be the narrowest section of the entire England Coast Path? 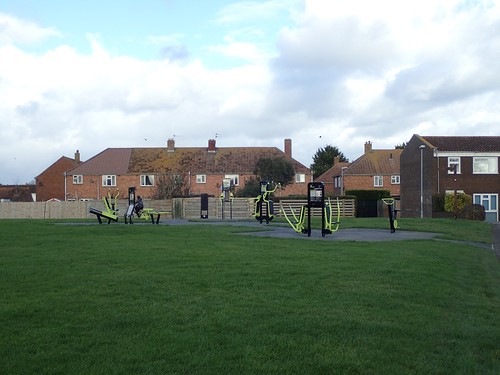 Back at Apex Park and, taking the long walk around to the car park, I noticed a set of fitness and exercise apparatus – similar to what I had seen previously, along the esplande at Portishead. It’s a nice idea but I know where I’d rather train.

I managed to evade the worst of the rain and make use of the free toilets before reaching my car. A short walk but a fair outing that left me with most of the afternoon to spare, plus a bundle of energy for a potential walk the following day. 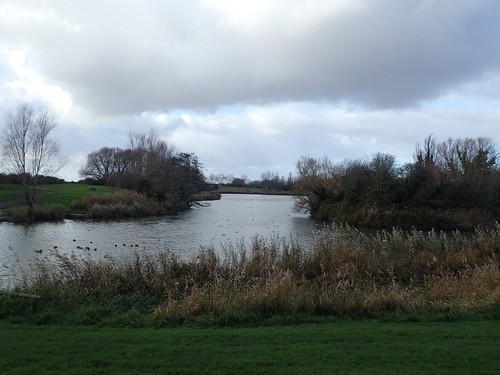 Distance of this walk: 7 miles