At the beginning of our long-weekend in North Wales, we’d all driven up the night before. Not wanting to waste one of our five days and, with many mountains explore, it was my suggestion to leave the cars alone on day one and do a local climb, from our accommodation in Llandrillo up in to the Berwyn mountain range. 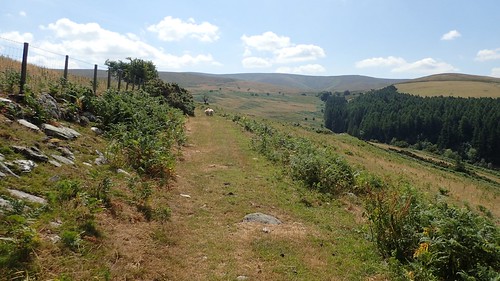 We made our start in the second-half of the morning and, without any question, I took the lead in our part of four. We headed south-east towards the mountains from Llandrillo and it wasn’t long before we’d begin our ascent. 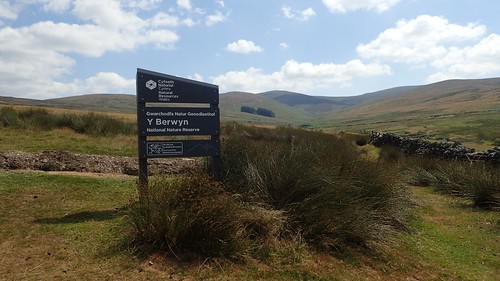 Of the five days we would spend in North Wales, I seem to remember this as the only day where we slopped on the suncream. Two of our group were even confident enough to wear shorts! I had my own reservations, knowing that we’d probably encounter long grass and a moorland landscape, although I’d not done any thorough research in to the area.

I hadn’t even heard of the Berwyn range before this trip. I only discovered these mountains when I purchased an OS map featuring ‘Llandrillo’ and noticed how close by they would be. 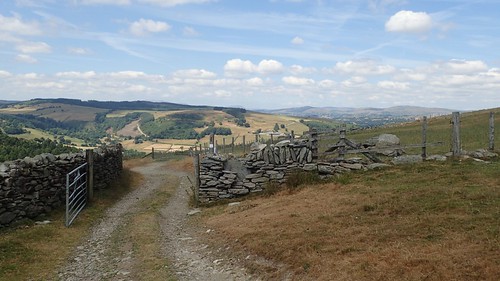 From the shading trees of Cefn Pen-Llety, where we had a brief stop; we were out in to the open and exposed to the strength of the sun. My plan was to follow a bridleway east to a former settlement and then turning south. But, the track was anything but evident and we soon lost our way in the grass, concealing soft peat underneath.

In a moorland situation, I often find that you can rely on the bridleways, if nothing else. 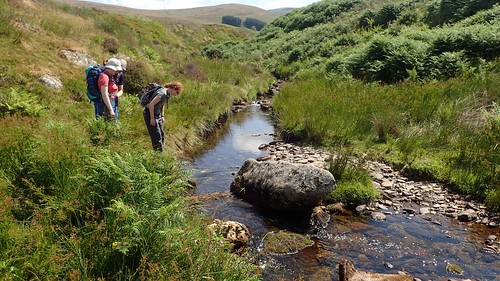 With help from Jenny, we were able to identify the stone wall beside our permissive route ahead and an alternative route along a black dashed line (on the map) that would also involve crossing a stream (Clochnant). 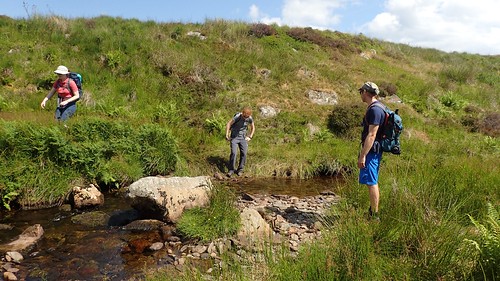 We each made it across without incident, before climbing to the ladder stile above the opposite bank. 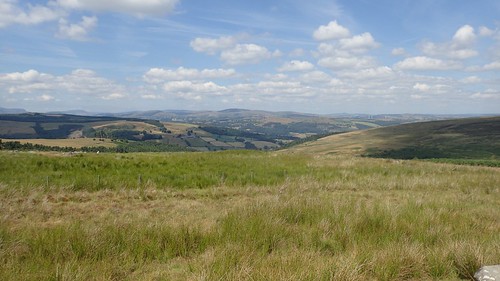 By this point, we were barely 400m above sea level and no more than fifty-percent of our way towards the highest point. But already, the views looking back were spectacular, bearing in mind that we were still several miles east of Snowdonia National Park. 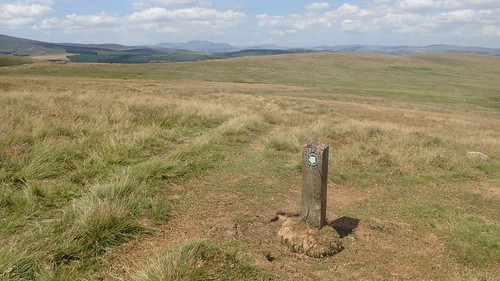 Although we were following a permissive route (as indicated by the orange markings on the map), we did encounter the occasional waymark. It would be a shame if the landowner one day revokes access to this path as it provides a direct route up to Cadair Berwyn.

…Saying that, this is on open access land. So, I presume we would still have access. I’ve never understood how someone can site a permissive path across land that is free to roam. 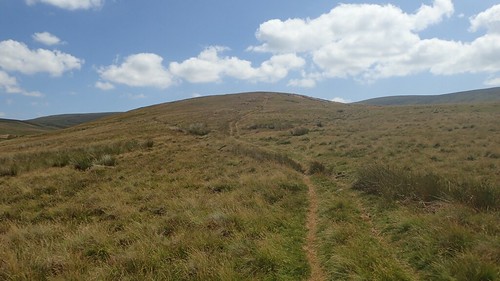 We crossed the boggy stream of Nant Cwm Tywyll before beginning our climb from Pennant. It was a long and steady ascent, with one or two false summits. 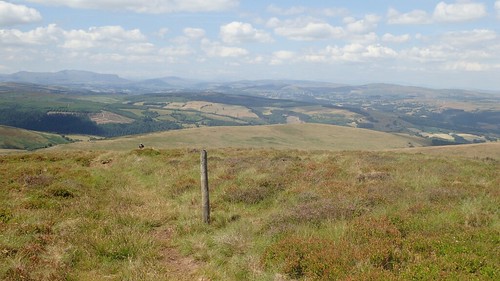 This route, although quite easy to follow, was occasionally marked by blank wooden posts. Probably more useful in conditions of poor visibility and snow. 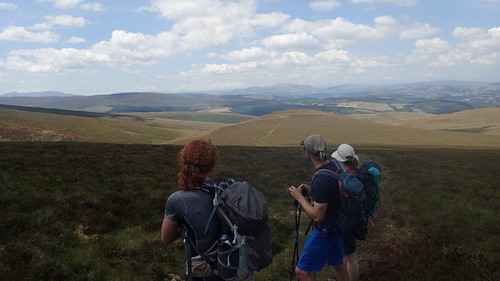 We paused several times along our 400m ascent. It was worth it, to take in the views. 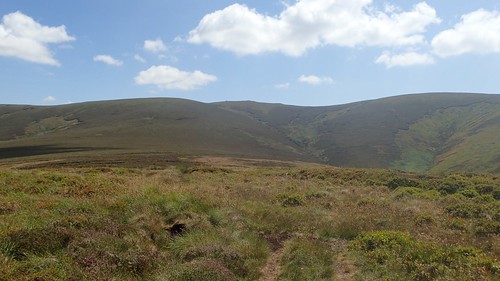 Beyond one false summit was a point at which the gradient increased. We could just make out the trig point on top, although the path became less defined as we climbed. As I often do when climbing punishing hills, I upped my pace, in the hope of overcoming this beast sooner. 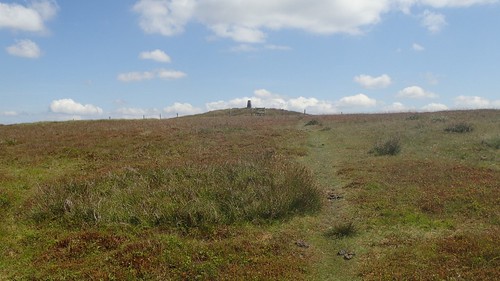 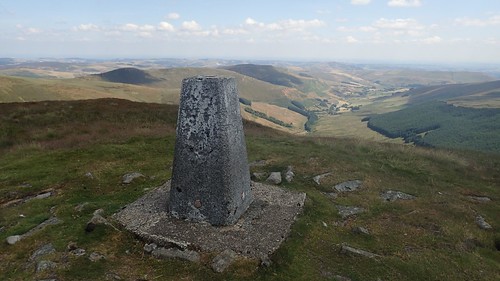 Cadair Berwyn, at 827m above sea level, bears the highest trig pillar in the Berwyn range. 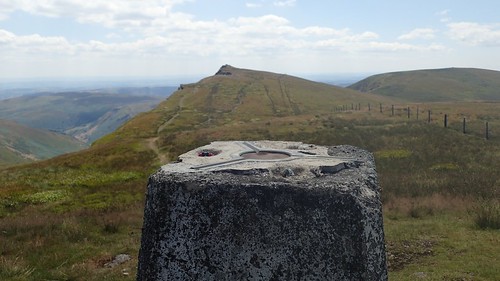 Although, it is not the highest point… As another, unnamed summit (830m) exists just south of here and is marked by a stone cairn and wind shelter. 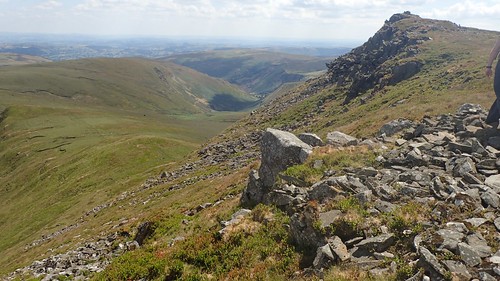 By the time we’d arrived at the trig, we noticed other walkers – the first we’d seen all day – following the north-south ridge beside the escarpment. They probably took an easier route up! 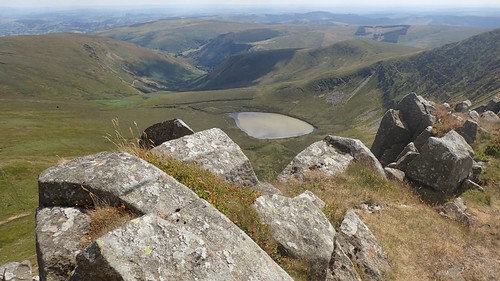 We stopped for lunch a few metres from the fly-ridden trig point. After which, we made our way south to this unnamed summit; from which, we could peer down towards Llyn Lluncaws. Lakes like this are a common feature of the mountains around Wales although, we didn’t think the colour of this one looked to be inviting.

In the valley just south of the lake, you could find Pystll Rhaedr waterfall. 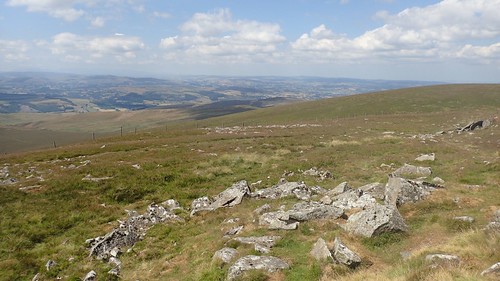 After admiring these views, we made our return north along the escarpment; passing the trig to follow Craig Berwyn. 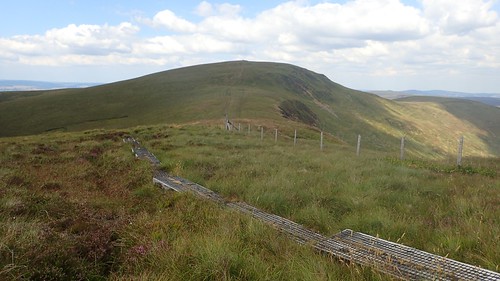 Cadair Bronwen was the other final high point we were looking to bag. When I first drafted this walk, I’d intended to simply lead us up here and then back down again. It was only when I noticed the trig on Cadair Berwyn that I decided to change things. 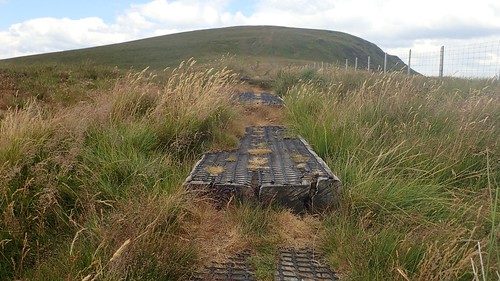 A very convenient boardwalk has been created along here, using old railway sleepers and some form of non-slip mesh on top. Again, this is part of a permissive route. Conditions were as boggy at this time of year but I cam imagine it’s a struggle to otherwise cross this land in winter. 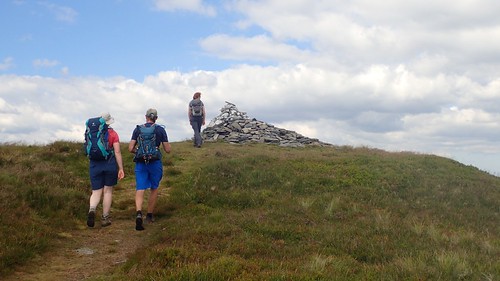 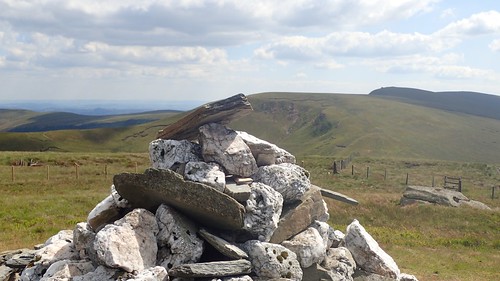 A sizeable cairns was waiting for us at the top of Cadair Bronwen. 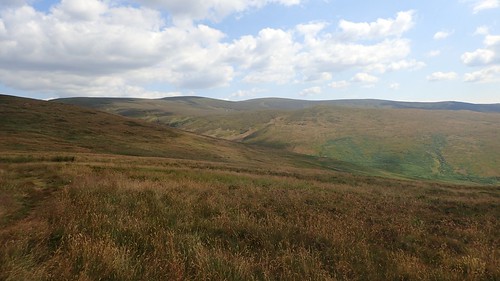 Instead of back-tracking down the hill we’d just climbed and losing a lot of height very quickly, I decided that we could ‘handrail’ (yes, it’s a navigational term) along the fence, heading west, to join the bridleway further on without expending too much energy.

Someone had clearly walked or driven this way before, as we had a clear path to follow. 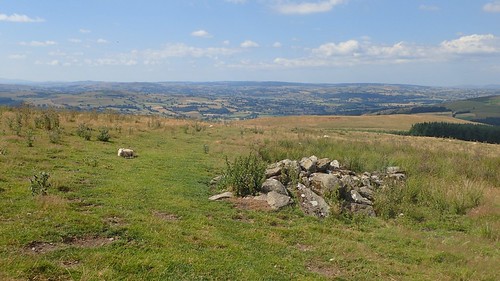 Following this bridleway would lead us most of the way down to the eastern end of Llandrillo, passing Moel Pearce at around the 600m mark and destined for the treeline of Coed Gerynant. 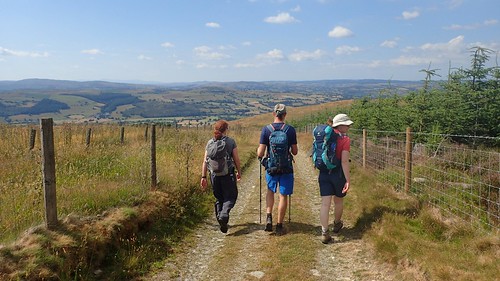 Beyond Moel-Ty-Uchaf (we missed the cairn circle), we’d turn left along a farm track with barely one mile left to walk. 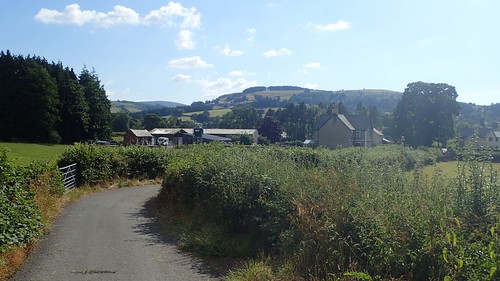 A quiet country lane would guide us down to the B-road passing through the village. 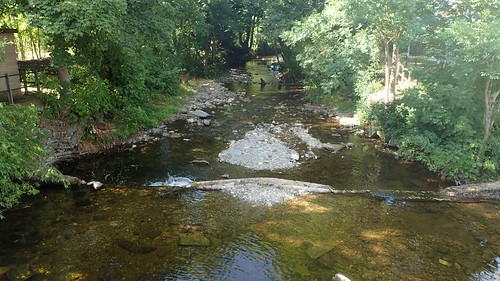 Back in the village, we’d cross over the Afon Ceidiog before returning to the cottage. This river looks to rise somewhere to the west of the mountains and that feeds north in to the River Dee. 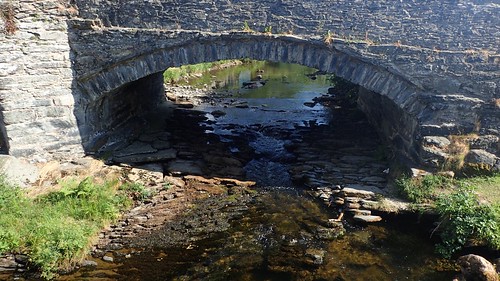 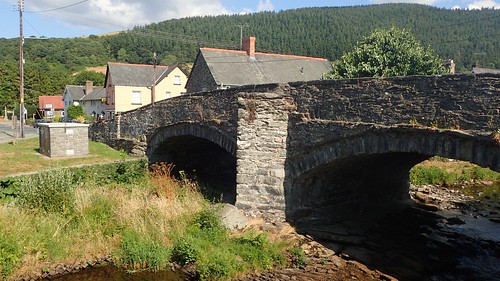 A good warm up for the challenges we would soon face and a day very well spent and not wasted.