One of my final walks of 2018 concerned an overdue return to the Black Mountains of South Wales. With the tolls for both of the Severn Bridge crossings having been scrapped earlier in December, there was less of an excuse not to travel towards the Brecon Beacons.

I drove to Bristol and met up with my friend Dave, who I’m be car-sharing and walking with. 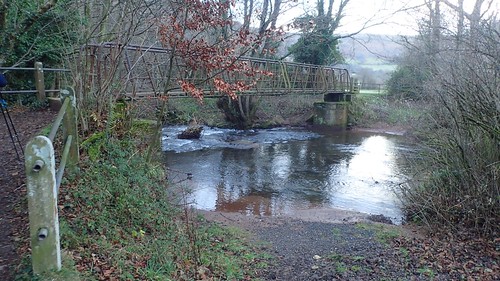 We were destined for Llanthony Priory and it’s free car park; a few miles north of Abergavenny in the Vale of Ewyas.

I’ve been walking in this area enough times now that I can find Llanthony without the aid of GPS or having to refresh my memory with a map. But I’d never actually used this car park; often choosing to head for the more remote car parks in the depths of the valleys. I’d like to revisit another time and actual wander around the priory ruins, which are free to explore. 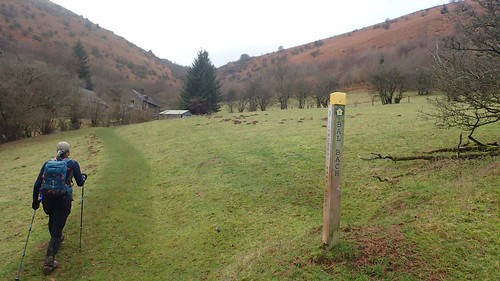 From the car park, we would join the Beacons Way and follow it up beside Cwm Bwchel to reach Bal Bach.

[Side note: I’d like to backpack the Beacons Way from start to finish, one year.] 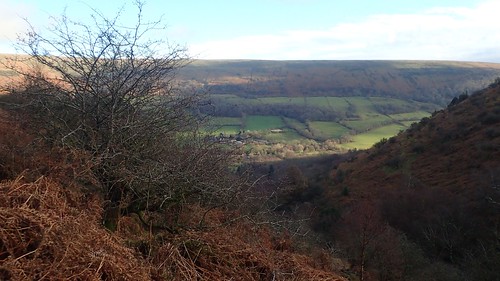 It was a long, hard climb and I didn’t take too many photographs. We found that the way was clear and easy to follow. Waymarking and steps were in place but there weren’t as many markers specific to the Beacons Way (it is only a long-distance route and not a protected National Trail). 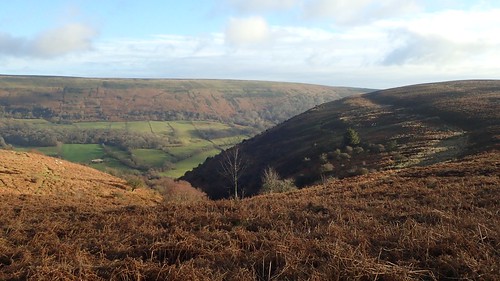 It was a day of low temperatures but not without occasional rays of sunshine and the odd glimpse of blue sky. 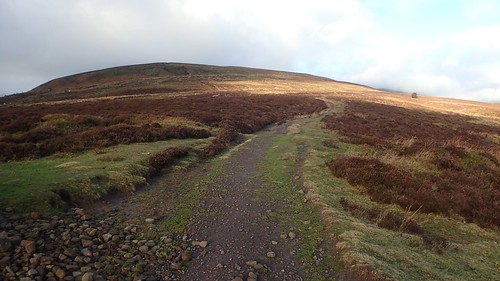 At the pile of stones, we briefly met a solo walker who’d possibly circumnavigated Graig Ddu to reach this resting point. Both Dave and I were surprised to see her already wrapped up in layers, while we had both taken the “be bold, start cold” approach to gaining elevation. 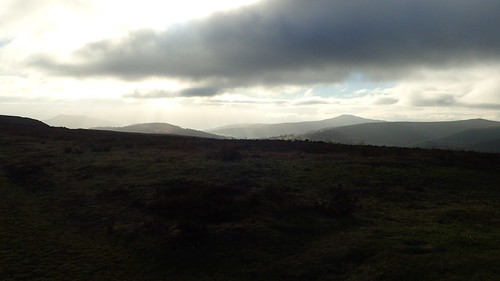 After a moment or two to refill our lungs, we left the Beacons Way to head up on to Bal Mawr. Away to the south, Sugar Loaf was visible among other high points. 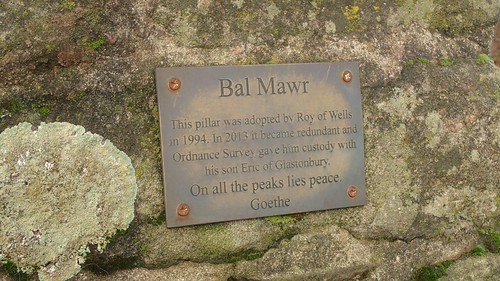 Mawr/Fawr = Big/Large
Back/Fawr = Small/Little
In ‘Bal’, an accent over the ‘a’, means the sound is elongated, I think. 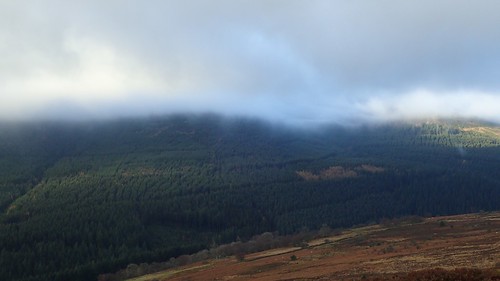 North-west across the next valley, we would’ve been able to see Waun Fach (the highest point in the Black Mountains) above the trees… But for the enduring fog. 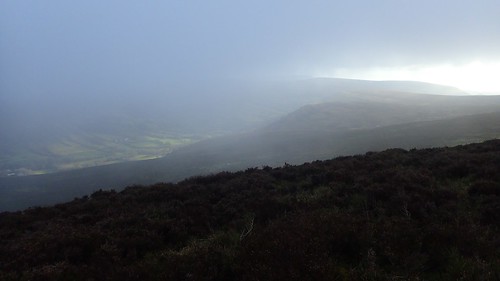 As we followed the ridge of Chwarel y Fan, those views of the valleys below began to fade, as we climbed slightly higher and in to the mire. 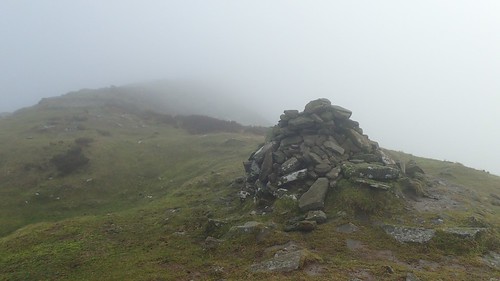 I’d walked most of this ridgeline before. In fact, in one group walk I led in 2018, we walked all the way to the trig point at Rhos Dirion.

From being bold, we soon turned our minds to wrapping up and equipping windproofing layers. It was not windy but this fog kept all of the sun’s rays at bay and even carried with it a few airborne droplets of water. 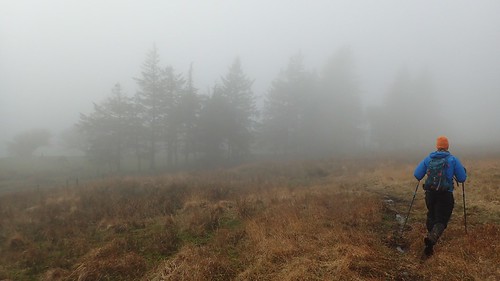 We would cross the junction with a path that descends to Capel-y-Ffin on one side, before beginning our gradual descent towards the reservoir. There’s no path on the map to guide you here… But we did find a track on the ground – probably made by vehicles for access – and we were able to follow this down alongside an enclosure that does appear on the map. 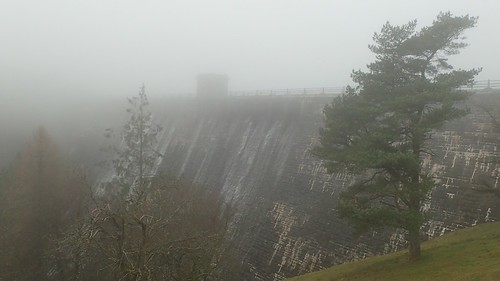 Through an unlocked gate at the bottom and we would reach the dam of Grwyne Fawr Reservoir. On the day down, we’d met a couple of bewildered dog walkers in the fog who’d been searching and hoping for the same exit point. 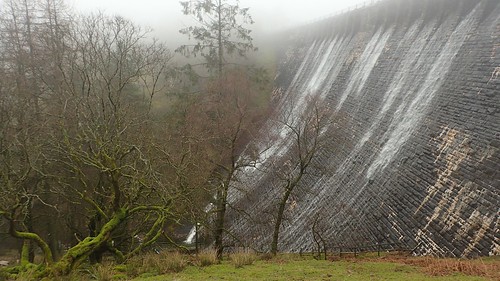 We dropped slightly down the hillside before stopping for lunch. Listening to the sounds of water – most of which appears to be trickling down the end of the wall that was furthest from us.

Further down towards the water, there is said to be a bothy. Perhaps worth noting, for those who do like to sleep in that way. Given the popularity of this particular reservoir and dam, I can imagine you’re less likely to find it unoccupied through many summer weekend evenings. 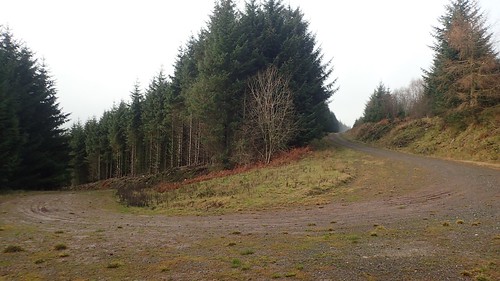 After lunch, we followed the byway down towards Blaen-y-Cwm (head of the valley) but climbed up along forestry tracks ahead of reaching the car park. 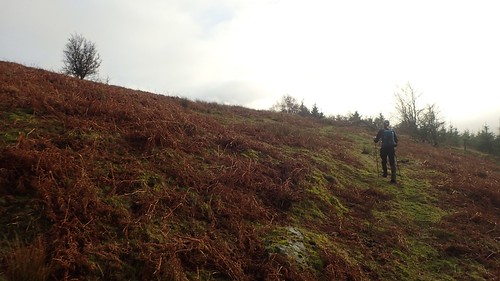 Now above the woodland, we would break out on to moorland and follow a path that contours the ridge we’d followed earlier, closer to its foothills and beneath Bwlch Bach (small pass). 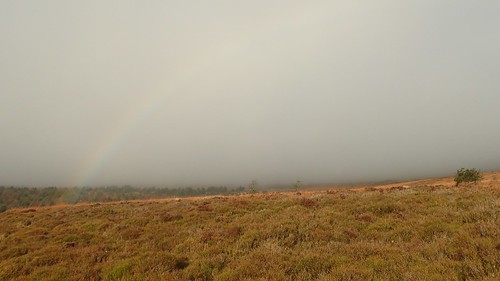 Back in September, my plan had been to lead the group along the right of way that we were following. Said walk was cancelled due to a horrendous downpour on the day. But this path was on the map in green dashed lines… I hadn’t walked it before but felt confident it would be easy to follow. 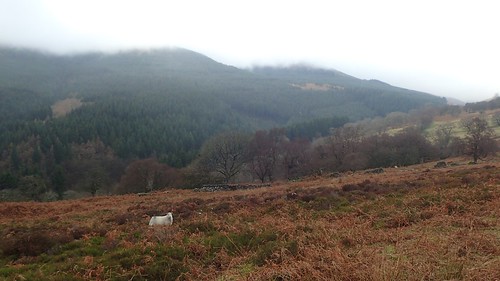 Well, I was wrong! Where there were ‘paths’ on the ground, they didn’t marry up with the dashed lines on our GPS data. Staying true to the right of way and with the aid of technology, we found ourselves bashing through gorse and stepping over tussocks… Had there ever been a path through here?! What on Earth had the Ordnance Survey team been drinking the night before producing this map?! 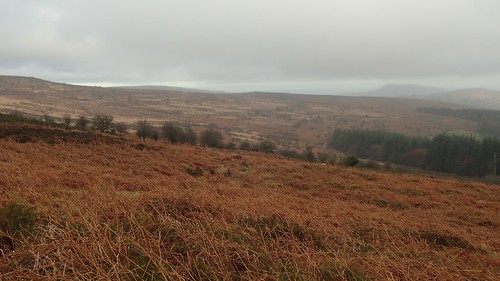 What matters most is that we did find our way to Bal Bach (initially, via an alternative “path” that doesn’t feature on any map). I was relieved that I hadn’t attempted to lead a group walk through here without having taken a pre-walk – I can only imagine it would’ve been quite a headache for me!

Other direct routes to the top are available – following “tracks” made by either vehicle or animal. But they are very steep and, as a man called Simon Powell once said on YouTube: ‘Sheep never climb a hill like that’. 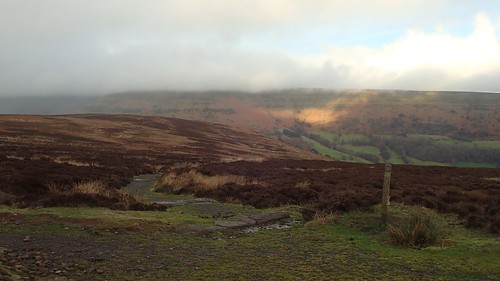 Across the Vale of Ewyas from Bal Bach, sunlight sat on the edge of Offa’s Dyke, taunting us with its suggested warmth. 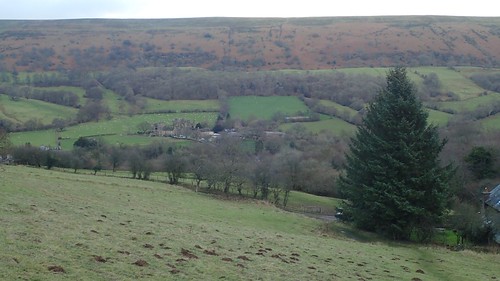 Retracing our outward and upward journey, we would descend towards Llanthony, it’s ruined priory and the car.

Another enjoyable day in the Black Mountains. I’ve yet to truly endure a bad one – excluding that one mistake of leading a group along a ridge covered in twelve inches of snow and with 50mph gusts sweeping us from our feet!

I aim to do more walks in Wales through 2019 and to explore those final pockets of the Black Mountains – and the greater Brecon Beacons National Park – that i’ve yet to see for myself.

One thought on “Bal Bach and Bal Mawr”