I like to think that a great proportion of the British public are already aware that the infamous toll charges for crossing the River Severn in to Wales have now been scrapped. Where a car would’ve recently had to pay £5.60 for the privilege of a day’s walk in the Brecon Beacons, we can all now make that journey without that added expense.

On the day before this significant event, I drove up to South Gloucestershire for a familiar walk along the Severn Way and above the active toll booths for one final time.

My walk began in Oldbury-on-Severn, using the large car park opposite the local pub, as I had done twice already in 2018. 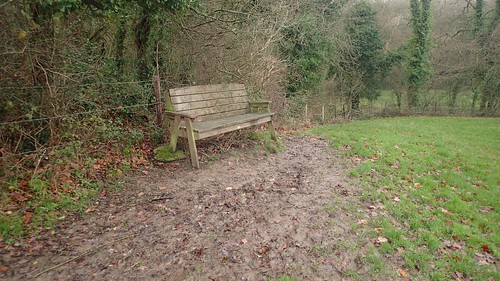 I walked south across farmland in the vague direction of Aust; following muddy bridleways to cross the occasional quiet road. This would lead me to a familiar bench alongside the Jubilee Way. A good hour in to my walk and a pristine opportunity for a short rest. 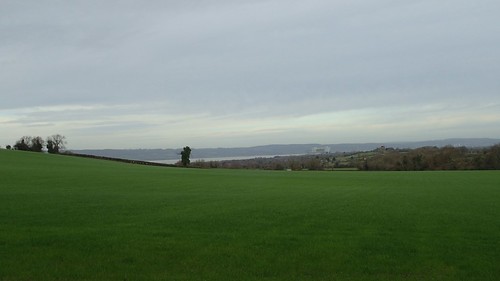 I kept to the Way beyond my break, now walking west towards Littleton-Upon-Severn and via a view of the River Severn and the defunct Oldbury Power Station, from Sacks Hill. 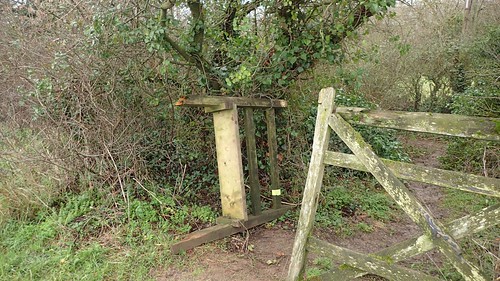 Beside a gate, one stile had been violently upended but still, the waymark was pointing in the correct direction. What really happened here, I wonder? 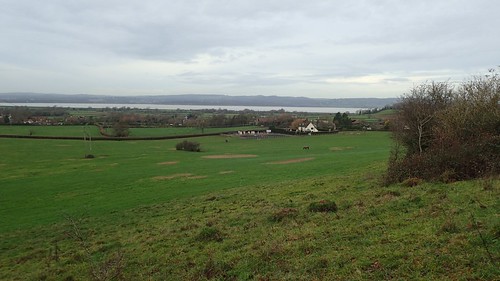 Coming down the next slope from the broken and bypassable stile, I had a good view of the village ahead. I hadn’t actually walked these paths on either of my previous visits to the area and so, it was a bonus for my experience. 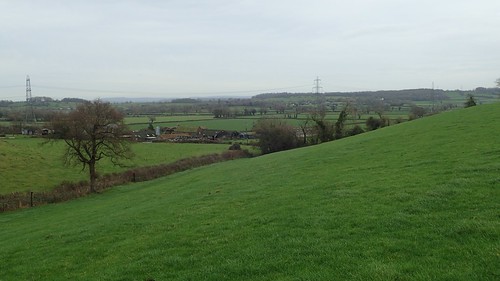 My walk soon continued along familiar paths and bridleways, moving closer to the rushing sound of the M48, bearing bridge-bound traffic heading to and from South Wales. 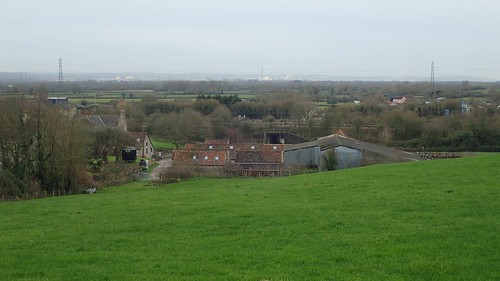 I would descend through Manor Farm before reaching Aust. One of my least-intimidating farmyard experiences. There’s even a holiday cottage available to rent here. 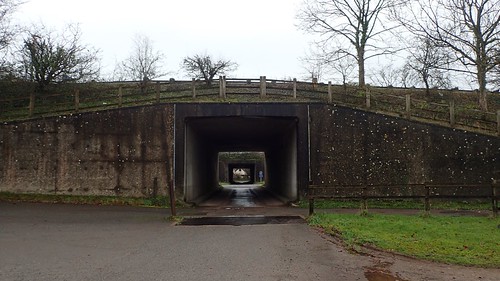 Staring at the bridge before me, I can think back to my first walk along this route, when I actually followed the route higher up, before dropping down in to Aust. It was only after studying the map of this area further that I was able to determine a possible alternative and traffic-free passage in to the village,

When I led a group walk through this area a few months ago, on a miserably-wet day where I’d hoped to be heading to Wales, we sheltered for lunch under this very bridge; sat on the unused pavement beside the road. 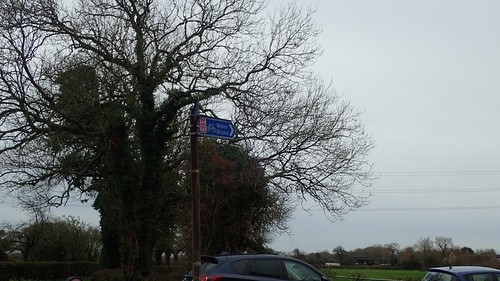 Wales or Bristol? One is a city. I can’t help but feel that a small flag symbol should next to the other. 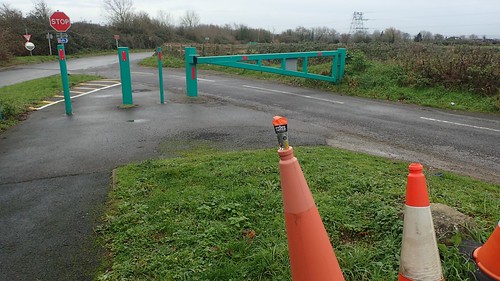 Passing through Aust, beside the church and over the next A-road, I’d soon begin my climb up to cross the original Severn Crossing – now following the Severn Way path.

We can all complain about ‘the general public’ taking little or no responsibility for their own waste. But when a presumed runner or cyclist leaves this behind, I find it extremely disappointing, given the possibility that this culprit may actually appreciate the outdoors. 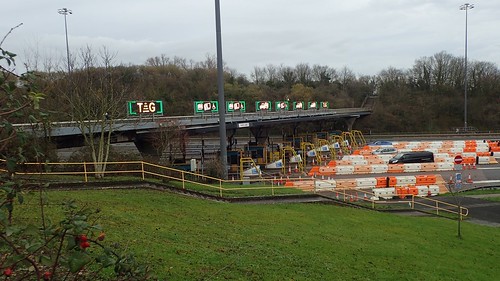 All of the M48 toll booths were in operation, for one final day. I wonder how many people making this journey on this historic day, had contemplated waiting twenty-four hours? Perhaps even a week, for the sake of saving a few pounds? 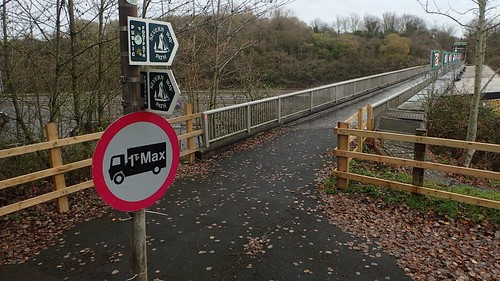 While many of us have anticipated this toll-free route in to the mountains of South Wales, I believe it’s worth thinking about the hundred or so people who have lost their jobs due to the closure; at a time of year when finances may already be tight. I hope those well-mannered people are all able to find something else and soon. 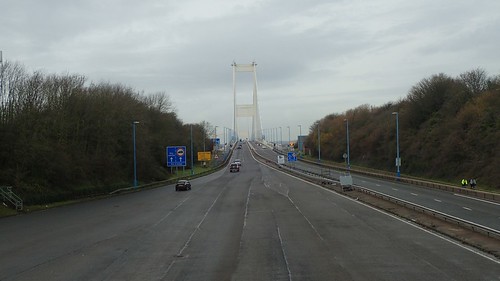 Some have speculated that by scrapping the tolls, we’re going to see a regular feature of gridlock on both of the bridges… Outside of Bank Holiday Weekends, I find this hard to believe. I mean, without looking for stories and reports, I’ve never heard of congestion issues on the (free) England-bound side of the drive.

I do not believe that many people at all would have gone out of their way to avoid paying the toll, when the long route would undoubtedly see an increase in their fuel consumption. If anything, it’s the holidaymakers, travel-types and pursuits who would’ve felt as though it was ‘not worth doing too often’… I know I’ve often felt this way with my walking! 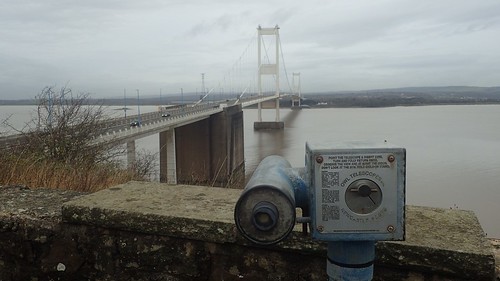 When I first walked this section of the Severn Way, the visibility from here wasn’t anywhere close to being on a par with what you see in these photos. 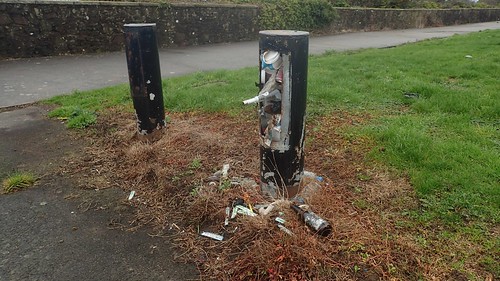 I can’t really imagine many people wandering out here as a highlight of their day. But some ‘less than desirable’ people have clearly been leaving their mark. 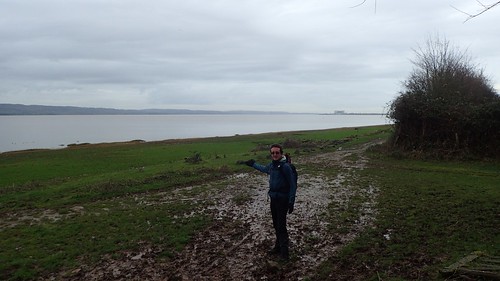 Over the bridge and I would follow the Severn Way all the way to Oldbury. An hour’s walk. Perhaps a little bit more. 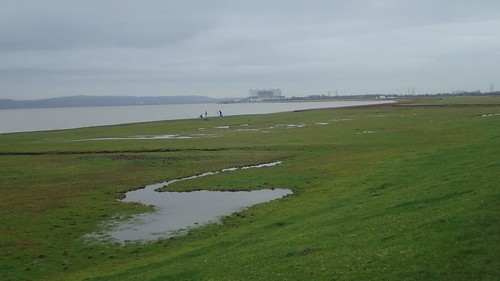 I’d wondered whether I might also see other people crossing or visiting the bridge for its final day under ‘commission’. 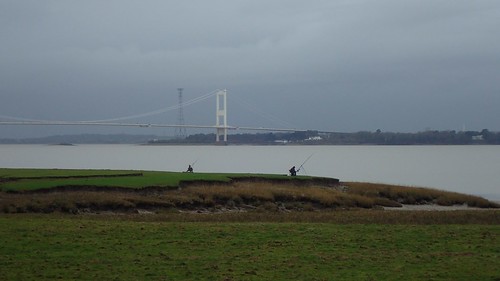 A number of fisherman had positioned themselves along the edge of the river/estuary. I’d not seen anyone here before. It must be the time of year and with the tides at their opportune level. 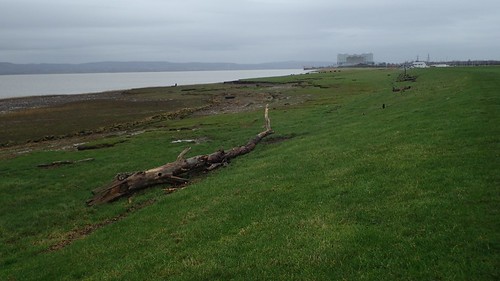 Speaking of the tides… Although I’ve not photographed it, I found evidence that the river level had recently risen to wash driftwood up and over the centre bank on this land and closer to arable farmland. We did see a lot of rainfall in late November/early December.

I’d passed one group of walkers, with another ahead of me. This first group had departed the bank to inspect what items had been washed up… One apparently found a ‘perfectly good’ car tyre and was keen to carry it home! 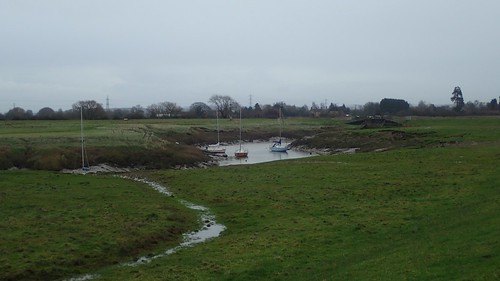 Arriving at the pill outfall, I must follow the Severn Way back in to the village of Oldbury-on-Severn. If you study even the latest map from Ordnanace Survey, you’ll see that there’s no legal way to cross the uninviting water and avoid treading on tarmac too soon. 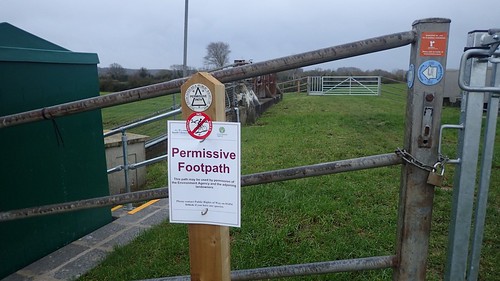 At some time in recent months and with thanks to the efforts of a local Ramblers team, a permissive and direct route through a pair of gates has been created! A welcome shortcut for anyone following the Severn Way, perhaps.

‘No cycling’ notices were clearly stated and I’ve previously noticed this on other paths nearby. I try not to voice too many critical words towards cyclists (I’ve had a couple of run-ins but we are all human…). But one thing I do not like is seeing a pair of wheels on a public footpath, as opposed to a bridleway or byway!

Ironically, as I walked back towards the village, my path was suddenly interrupted by an impeding cyclist! Not only was he breaking the law ahead of me but he’d clearly been in the wrong to have reached this point from the north!

Now the tolls are gone…

There’s a common opinion within the walking group that we’ll be ‘walking in Wales all the time’, now that the tolls for crossing both of the Severn bridges have been removed. Realistically, I think we’ll still cross over as often as we have done (recruiting walk leaders and maintain a healthy programme of walks remains to be the bigger issue). But I like to think that we’ll pay more attention to those green areas closer to the Severn, along with the Wales Coast Path.

When you’re having to pay extra to travel somewhere, it’s a human reaction to emphasise the event. Whether that’s heading for the highest mountain, the highest number of mountains and trig points you can squeeze in to one day (ahem) or perhaps only walking the coast in an area that’s commonly regarded as being beautiful.

Have your own intentions towards South Wales changed, with the knowledge that the bridge tolls were to be removed? Please comment below, if so.

4 thoughts on “No More Tolls”