Another walk in Lockdown and this one took place ahead of the Sand Point walk I wrote about previously. Wick St. Lawrence is a small village and parish on the outskirts of Weston-super-Mare and a stone’s throw from where I currently live. I hadn’t explored all of the area and knew of a series of (potentially inaccessible) footpaths close that would be the feature of this morning’s outing. 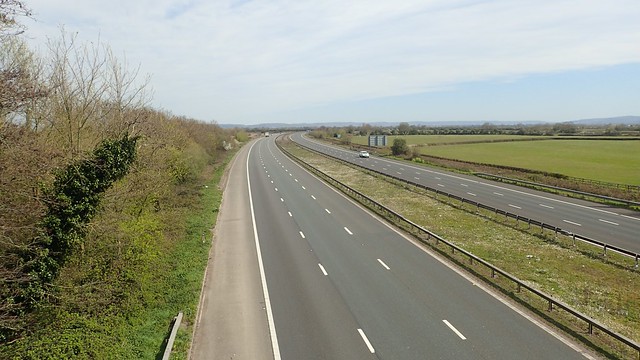 This would’ve been the first full Sunday in Lockdown for the UK. Following the road over the M5 motorway and in the direction of West Hewish, it appeared as though many, many people were abiding by the government’s latest rules. 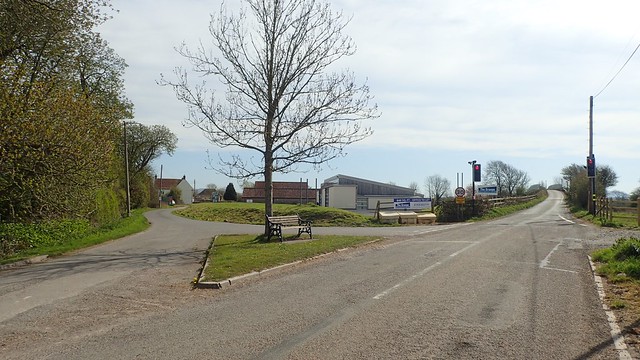 As I continued to cross the railway bridge, I was effectively walking parallel to my return route which I’d hoped would follow the fields and riverside as indicated on my OS map.

I first walked along this road (in the opposite direction) with Anna back in 2015, as part of our Somerset Coast Path walking series, with this leg stretching from Hewish all the way to Brean. 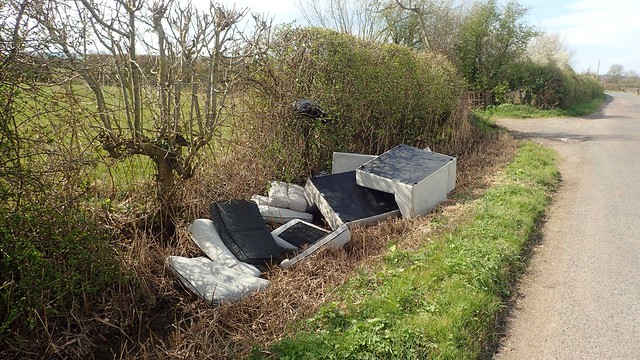 A larger incidence of fly-tipping than the one I mentioned the other day. I reported this to North Somerset Council and I believe they picked it up the very next day.

While it is great that the council is so efficient in this manner, it’s a shame we cannot locate and prosecute the offender and, if the council will do all it can… Does that not lend the lout an unofficial license to dump alongside any road, as it will be collected at some point?! 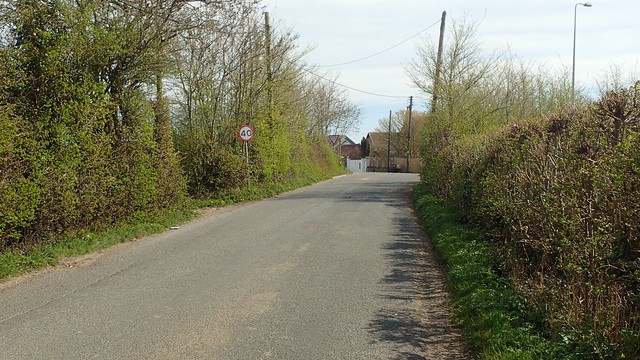 Now, I was walking towards the A370 and, as quiet as it did sound, I did not want to be walking alongside it today.

I’d seen a few cyclists on my way out from home and this road forms as part of the National Cycle Network; bypassing Junction 21 of the M5 and then making its way in to Weston via. St. Georges, where I currently live. 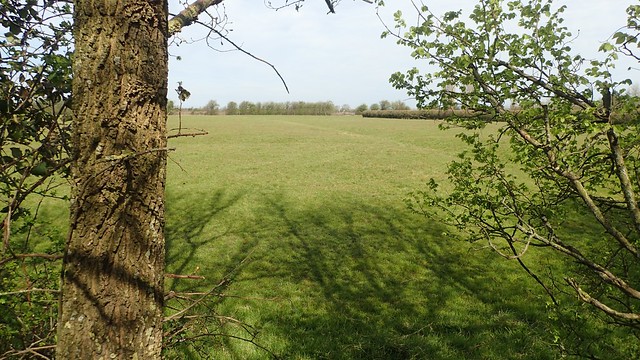 My intended footpath would be on the left, right on the road junction. I’d driven past this stile may times over the past five years – sometimes even daily, on my way home from a previous job. I’d thought our coastal walk back then might’ve crossed over here (perhaps the author of Somerset Coast Path knew better). 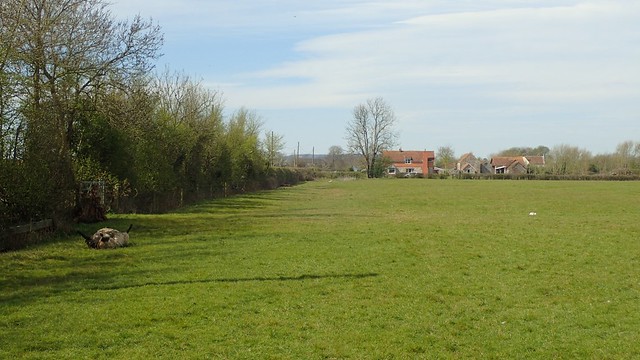 I was pleased to find and open field ahead of me – and then the sad site of an upturned (and presumably deceased) sheep away to my left. 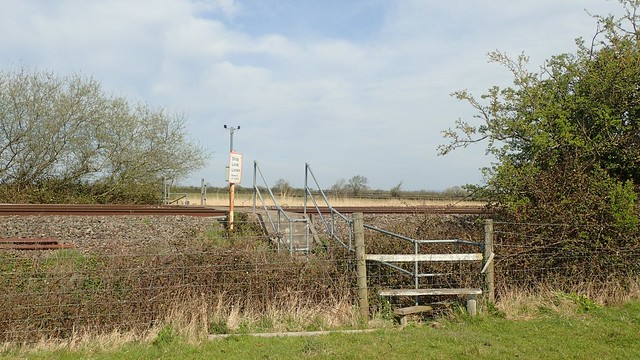 Across this field and I arrived at the train track. No signs of an obstruction, although the stile looked a bit beyond its best before date. 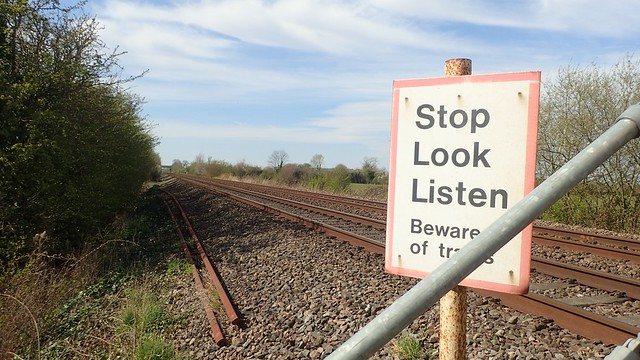 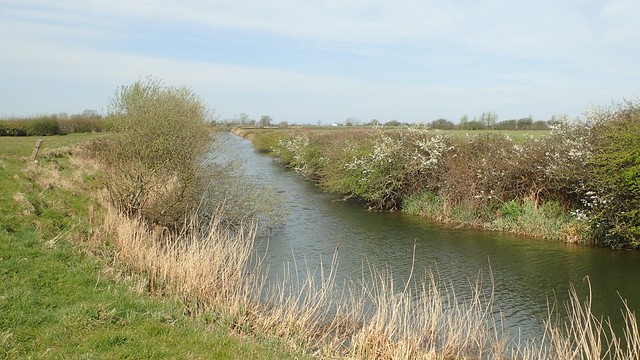 Then, I would walk alongside Oldbridge River – there was even a yellow waymark arrow to show the way. Perhaps the last indicator of its kind that I would encounter before I next trod on to tarmac… 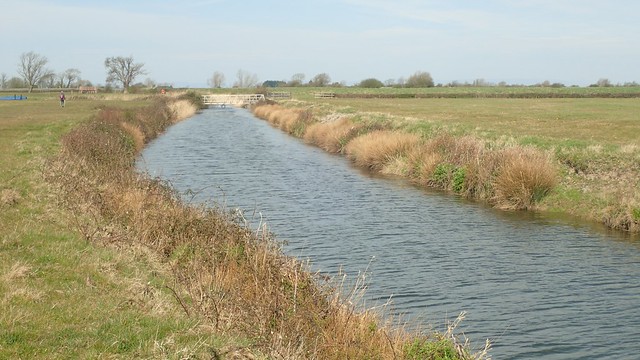 As I followed the river in to the second field, I spied another human (female), heading towards the footbridge from a position far away to my left.

Thankfully, not a landowner but another walker. Which then begged the question… Why had they been all the way over there and so far from the right of way? A question to which I’ll never learn the answer. 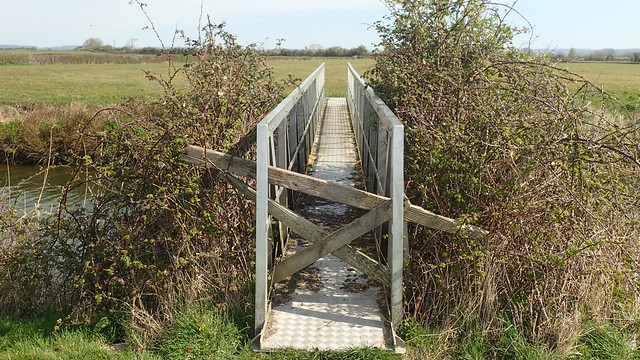 She’d appeared to hesitate before attempting to cross the bridge and, as I arrived at the same point one minute later, I saw why. No waymarking arrows and a partial obstruction at one end only. I’d like to think this was to keep livestock at bay but there was nothing grazing on either side of the river. 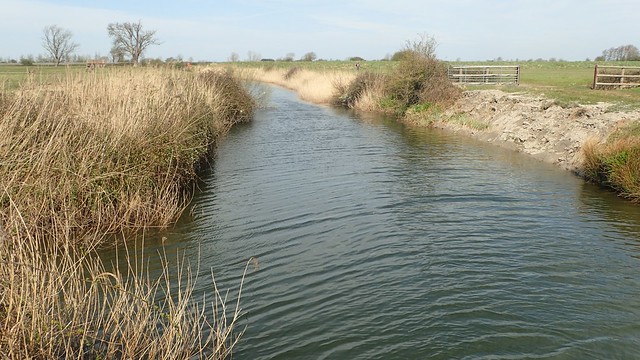 I stepped over and continued with no hope of catching this fellow rambler. 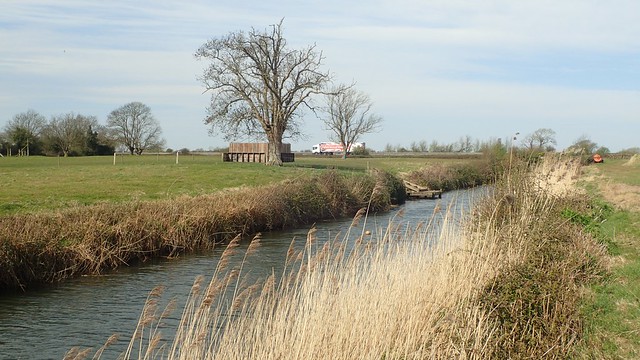 According to my estimation, Oldbridge River may be only 3 miles long or certainly, not more than 4 miles. It starts somewhere on Puxton Moor (OS maps don’t offer a concrete answer, here) and then drains in to the Congresbury Yeo at Tutshill Sluice (which will be a crossing point for the Clevedon-to-Weston coastal path), which then meets the Severn Estuary.

From the eastern side of the A370, it looks as though I could potentially follow footpaths alongside it for a good portion. It’s also possible that I walked a short section of that back in… 2013 or 2014. 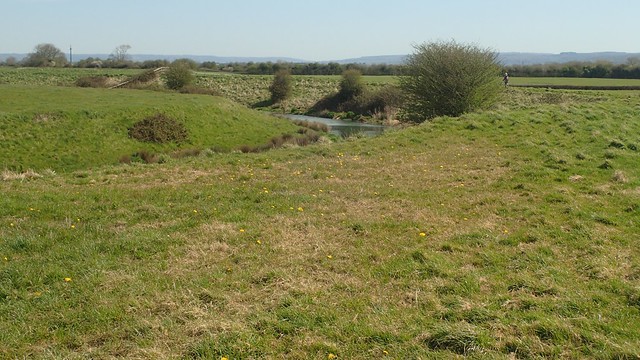 At this point where the river nears the M5, my non-companion climbed up on to the bank of the Congresbury Yeo and followed this north-east towards Phipp’s Bridge…

…But as you’ll see above, there is no right of way along there. From the work I did earlier this year in looking up the historic footpaths of my local area, I don’t recall that their would’ve been one previously either.

I admired her courage (although I hadn’t seen a map), as I’ve pondered attempting the same trek myself. One would only have to ‘stealth’ their way across three fields and boundaries to join a bonafide public right of way. Ruth Livingstone, among other coastal walkers, has done this successfully.

I have wondered about making a circuit that joins up with the Sluice Farm track – but there’s no guarantee I’d be able be able to cross the river to the west of the motorway. This area is rife with ‘disjointed’ rights of way that were not given any consideration when it was decided that the M5 would cut through. 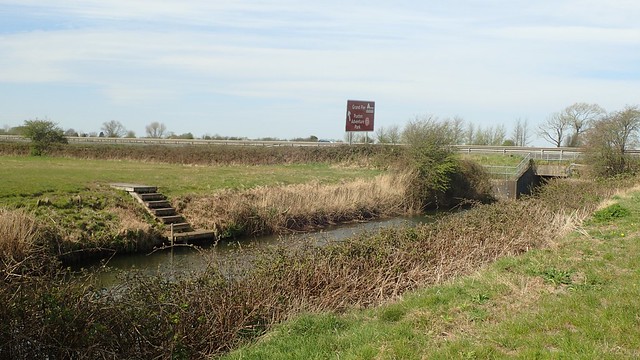 Going back to my walk… I would have to cross Oldbridge River to make my way home and before reaching the M5. There’s no way I was going to reach those steps(!) and I would be entering land that is used by Mendip Outdoor Pursuits.

It is possible that I came very close to this river as a child. Where teams were required to build rafts and then set sail on the water, I was the one sat out of the way, crying, scared and responsible for my team’s deduction of a million points! Elsewhere and nearby, Ruth discovered one of the “rope bridges” that I was also too terrified to cross – when you’re only 4ft tall and told that the rhyne beneath you could be 9ft deep… I don’t understand why no-one else backed out (or fell in). 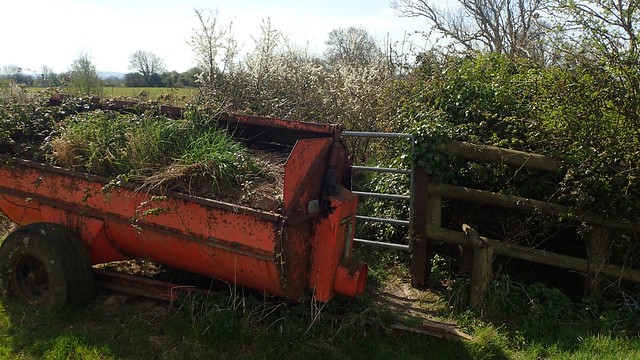 Putting the traumatic childhood to one side… I’d accidentally walked past the gate I should’ve been looking for – and you can probably see why I missed it! With no hope of getting it open, I climbed over to find a tidy path cutting through the greenery.

To this day, I wonder whether this right of way has been “officially” closed or, if there’s some kind of ‘mutual agreement’ between the landowner the council that the public are not to be made aware of (sadly, I’ve encountered that in other parts of North Somerset). 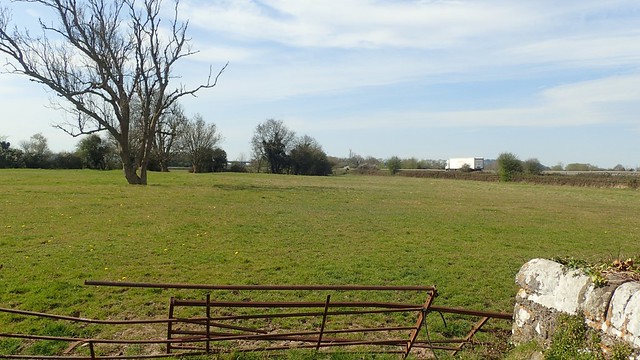 An open field lay ahead – possibly where I would’ve done archery as a child. I was pleased that there was no one else to be seen or heard as the gate didn’t look very welcoming – even though this is clearly stated as a public footpath on all maps. 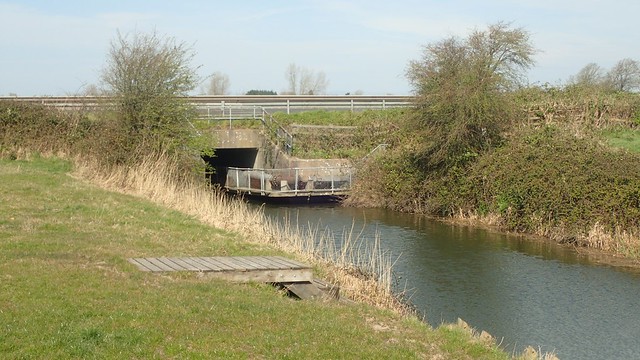 I looked back along the river and towards what appeared to be a subway carrying pipework underneath the M5… A possible link route with my Sluice Farm idea?! So many things could go wrong; I feel I’d rather drive twenty minutes for a better experience all round! 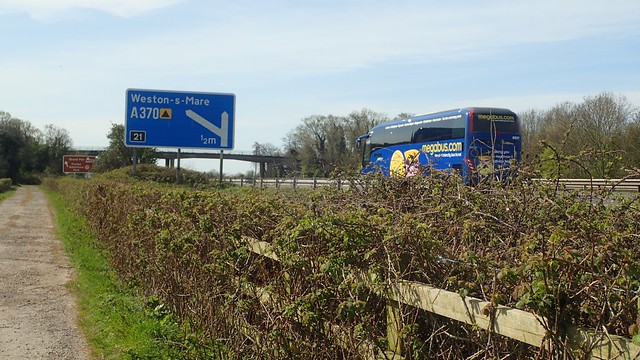 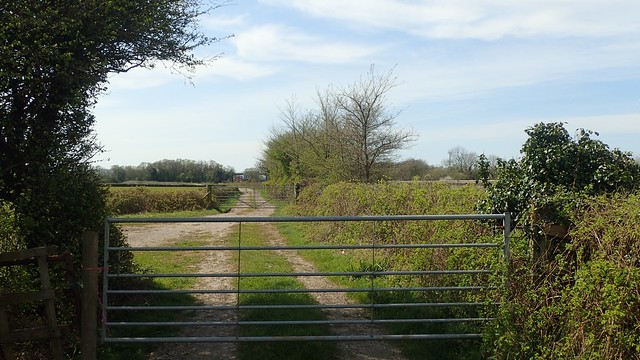 Gate, after gate, after gate, as I followed this track on towards the road I’d left earlier. Climbing was the easiest option and again, with the distinct lack of waymarking or welcoming. I don’t like the feeling of trespassing when you know you’re following an officially chartered public right of way. 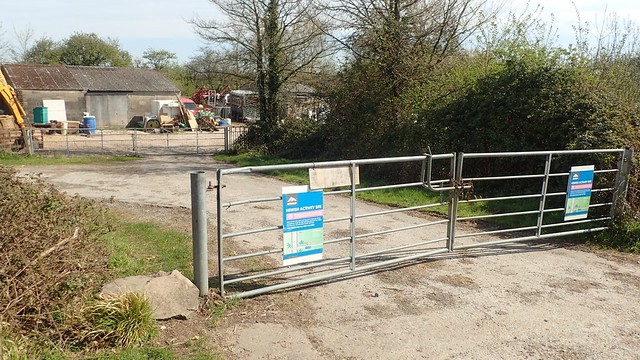 There was nothing to stop me from leaving the beside the entrance to this Mendip Activity Site – and no bright of happy arrows to guide a keen walker back in. Only a map that depicts that parking and drop-off point for visitors and participants.

If this is where archers of all abilities (or none) are allowed to let the arrows fly then, I can see the potential Health and Safety risk of Joe Public were to come strolling through with their dog(s). But it would be nice to see or read some form of clarification. Selfish landowner or just poor maintenance?

I may ask the council about this. 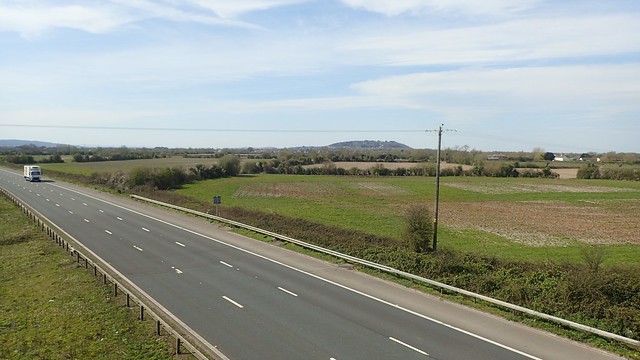 Following the road back over the M5 and I was closer to home. Still so little traffic on the road; mostly large lorries hauling goods up and down the country. Whatever happened to their weekly celebration? 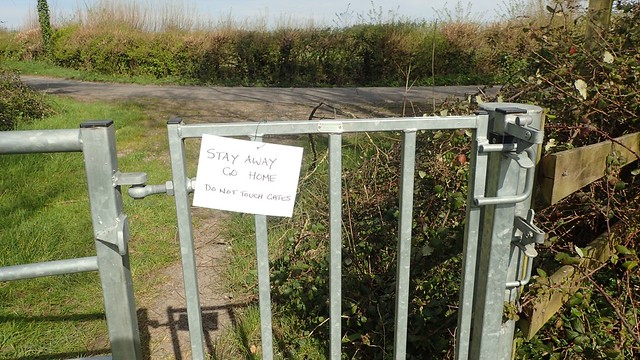 Almost home and, on a gate that I pass through frequently during my evenings walks, I found this notice attached. Presumably from the owners of the home next door (I’ve been told that dog walkers sometimes park their cars right in the gateway).

I found the message to be quite rude, at a time where people were always allowed to venture outside (once per day) and where not even the landowner would hold the power or right to deny access to a public right of way. Also, opening a gate without touching it is usually impossible!

…May have been a more welcome approach! I had it in mind to take this down the next time I passed through but, I then found that someone had beaten me to it.

In only a few miles, I managed to uncover many new things within a short distance of my own doorstep.