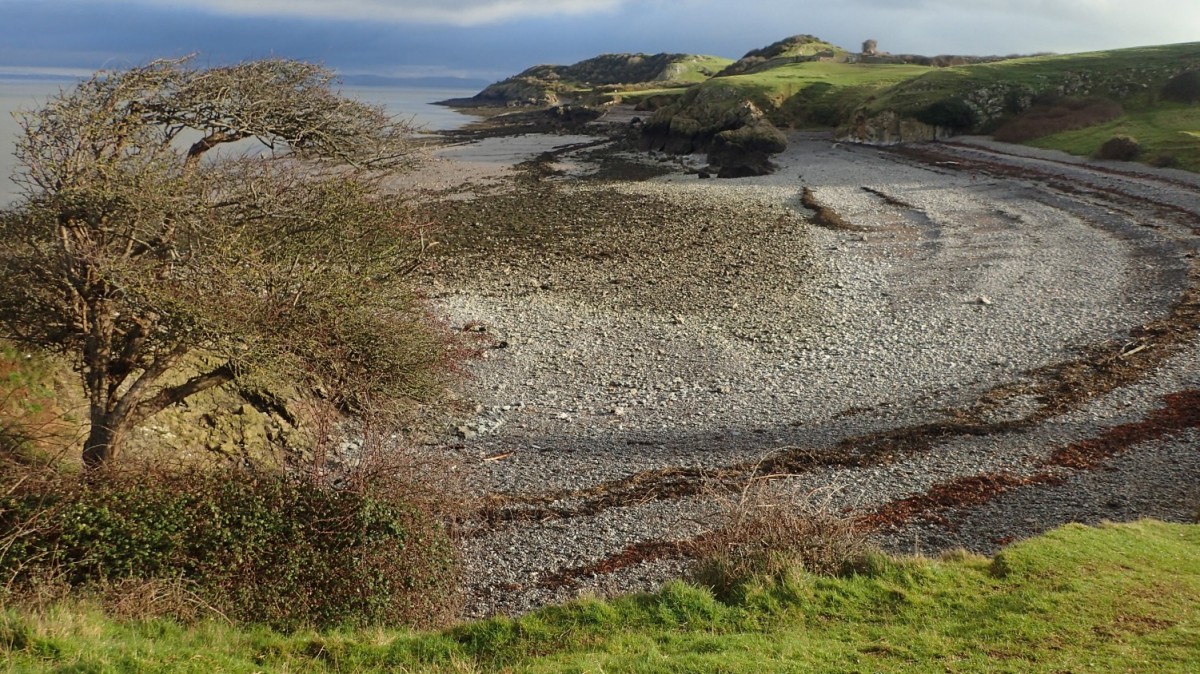 Overnight, snow had fallen locally and in other parts of the UK that had not already been blanketed. Or so I read online.

My plans for the day didn’t change. I would walk out to Sand Point from home, once again. This time, I’d head clockwise around and take in Sand Bay before it could come close to getting busy again.

I was up at my usual time and before the sun had officially risen. I’d heard the soft flakes or snow or sleet batting against my window. There wasn’t an awful lot of whiteness, looking immediately from my bedroom window… But I had quietly hoped I might find more. Locally. Somewhere!

My walk started by following the River Banwell from St. Georges and up past Ebdon to the next road. This isn’t a marked public right of way on the OS map… But it’s a footpath you can walk and cycle along (as many do) – and one that I had only very recently confirmed as continuous; despite having lived here for almost two years now.

Under foot, the going was black and icy. No strong signs of snow but I was grateful to have my Altberg Malham boots on. I’d thought about wearing my running shoes, as boots often feel like overkill on the grey ground… But these ‘Bergs have excellent traction on thin ice, I’m pleased to say.

I’d be heading out for a run the next day and would deliberately delay my start, with the threat of another freeze overnight and the potential for ice under foot.

From Ebdon Lane, I took the very-familiar bridleway from Ebdon Farm, leading up towards the top of Collum Lane. This was probably about as snowy as my walk was likely to get.

Crossing the road, I continued west towards Sand Farm. It became clear that there wasn’t likely to be any snow up on Sand Point or Middle Hope.

In this part of the south-west/westcountry, standing on thick frozen mud is akin to stomping through drifts of snow.

I spent a lot of time that morning, debating whether or not I was looking at houses or snow up on Worlebury Hill… In truth, it was probably a bit of both!

Out through Sand Farm and I’d safely cross the road on to the dunes of Sand Bay. Regardless of what powder I might’ve found, I could see greater heaps of snow covering the Quantock Hills and Exmoor (just beyond Birnbeck Pier).

Down on to the beach. It wasn’t busy at all – perhaps thanks to the lower temperature. I walked north towards the peninsular of Sand Point.

Climbing familiar stone steps, I made my way from the (restricted) car park and up to the trig point close to the highest point.

Now, I had quite a good view of the Mendip Hills. From this angle, I’m still unable to name and distinguish them.

I had felt a temptation that morning, to “break the rules”, risk a Police fine and travel further in the hopes of a proper snow day… I’m sure some will have done this and that many more will have shared the thought. But it will always snow again on higher ground. Seeing snow in and around this town would’ve been the anomaly!

Patiently following two men and their dog from a distance… I walked on towards the western end of Sand Point. This was an area that I skipped on my previous walk here, two weeks earlier. Being so close to the National Trust car park, it can get busy around here (even when a greater portion of the car park remains close for some unspecified reason).

It was only around this rocky end that I first felt the bitter breeze of Old Man Winter. Dropping down towards the bays on the north side, I’d soon escape his grasp.

When you stop for ten minutes – as I did, here – an unexpected number of people can soon pass by in such a seemingly-quiet area.

Walking to the east now, I plodded on towards the next bay; forever looking for a space in which to rest and brew a cup of tea. Across the Severn, I could see snow on the Welsh hills and probably mountains.

Looking north up the estuary, the Severn Bridges appeared to fade away as dark clouds and mist crept over from Wales. I felt as though the rain would reach me at any moment… But it never arrived. Perhaps I still had time to find a space and get that stove boiling.

This has to be the most well known bay around Sand Point and Middle Hope. I wouldn’t usually venture down here, for the presence of other people… But I was yearning for that cup of tea and I’d carried the water, teabag and kit this far.

Well, I screwed and clicked the Jetboil MiniMo together; set the camera rolling and… The gas wouldn’t light properly! There was little more than a few grams of gas left in the canister. But my fault had been to not insulate the fuel for the past two hours of walking in sub-zero conditions!

Ironically, I do own a down-filled cosy that could’ve used for this (I usually purpose it for looking after my electrical stuff). If it wasn’t so cold down there, I might’ve tucked the can in to my jacket and hoped to revitalise it with my body’s warmth…

But I would have to march on. Somewhat grumpy and lacking in tannins. Another hour or so of walking and I’d be home. With a fail-proof kettle and just in time for lunch.

After taking in the view of Woodspring Bay and looking north to Clevedon, I dropped down along a very muddy path and through the Middle Hope car park, out beside Woodspring Priory and back on to Collum Lane.

Back down the Ebdon Farm bridleway and I was almost home. Beyond which, the snow-capped Mendip Hills shone beneath a heavily overcast sky.

Even Crook Peak looked appetising, with a tiny portion of ‘icing’ marking its summit.

There was still something in those clouds and, to my eyes, it looked heavy. I hadn’t studied the forecast but was anticipating another downpour. Downfall? But sadly, nothing came of it. I don’t think it even rained for the next twenty-four hours.

Another successful Doorstep Walk… Although I felt myself beginning to tire already, of the familiarity of this route.