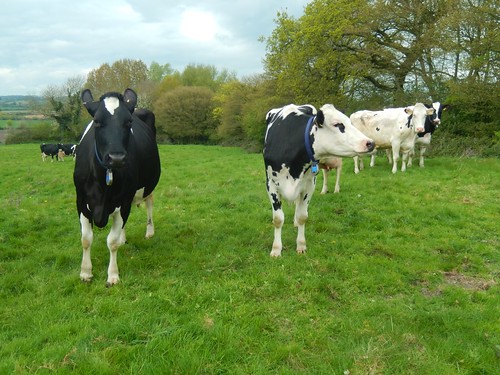 I was just about halfway in to this walk; thinking about lunch while having to negotiate a herd of dairy cattle who had congregated close to the stile I was aiming for. 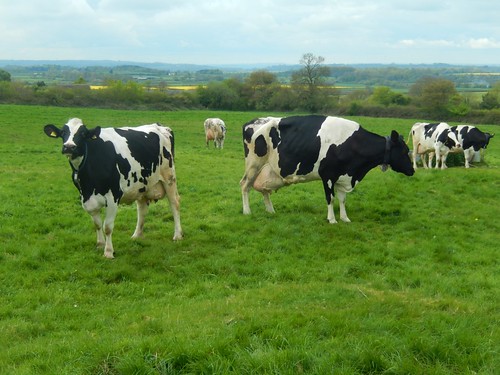 Cows are said to be heavy creatures. When you see one that looks as if it’s almost ready to burst, full of milk, you begin to realise how easy it may be to underestimate their weight.

I walked on through Clevancy, crossing a series of fields and following the line of high cliffs up to my right. 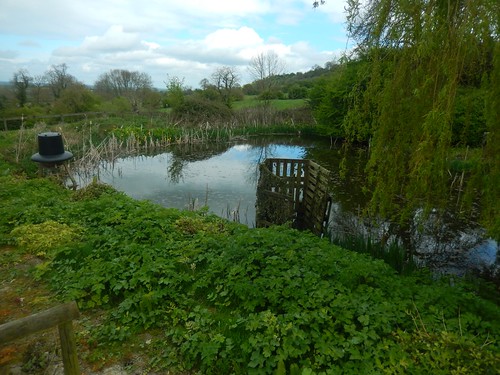 In some fields, the right of way was more clearly defined and easy to follow than in others. I probably should’ve been walking on the other side of this pond (which doesn’t even feature on the OS map). 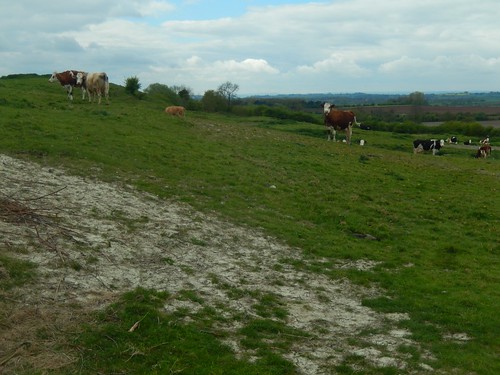 There were more cattle up ahead; beyond small areas labelled as Badgers’ Copse and Sheep Heights. I don’t know if they were a dairy breed but they were less ‘curious’ than the previous herd. Thankfully. 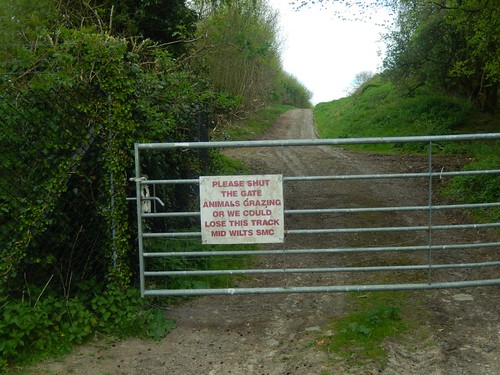 I followed this lane to join a road and could hear cows with bells in the field beneath me… Almost like walking in Switzerland, or so I can only imagine.

Why aren’t cowbells a more common thing? Like the crocodile in Peter Pan who swallowed the clock… You always knew when it was nearby. 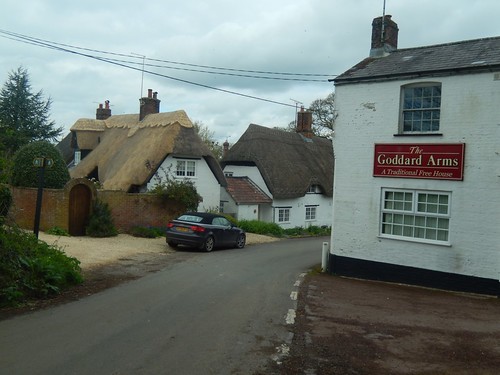 Now, I was in the village of Clyffe Pypard. Several of the houses here have thatched roofs, like many that surround Avebury. Surprisingly, the pub was closed. But then, it was a Monday afternoon. 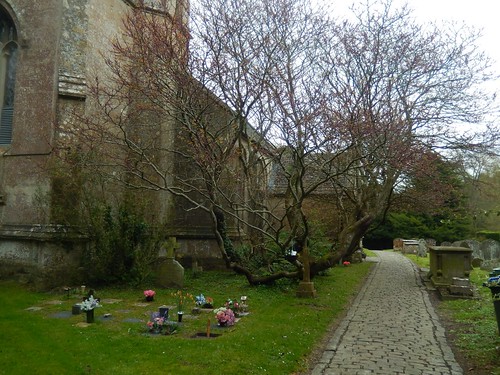 I continued to follow the White Horse Trail in to the yard of the local church. Very quiet and well maintained. 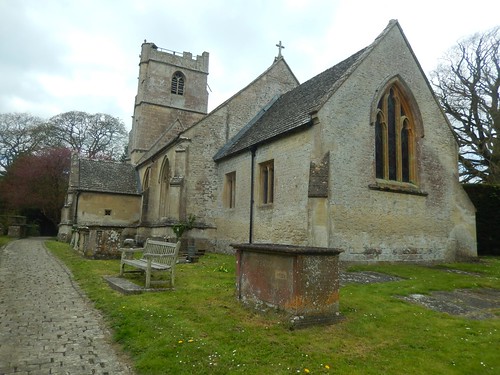 I found a wooden bench available towards the rear of the church and, with no suggestion of rain overhead, this would become my lunch stop. Boots off for half an hour! 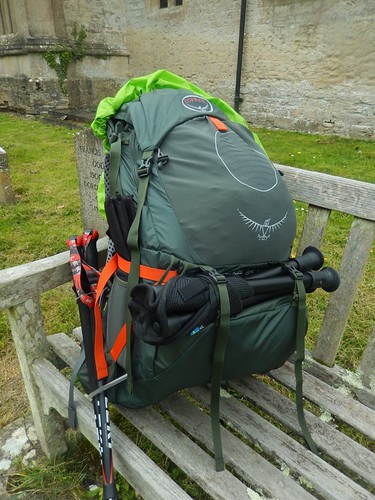 Something I forgot to mention – this was my first walk with my new 65lt rucksack (Osprey Atmos 65 AG). That morning, I had loaded it with 12kg of ‘stuff’. While I could feel the same kind of weight in my hand, I felt like I was carrying a mere fraction of it on my shoulders.

First impressions are great and this was a good taster for walking The Ridgeway, where I hope to be carrying a maximum of 15kg each day. 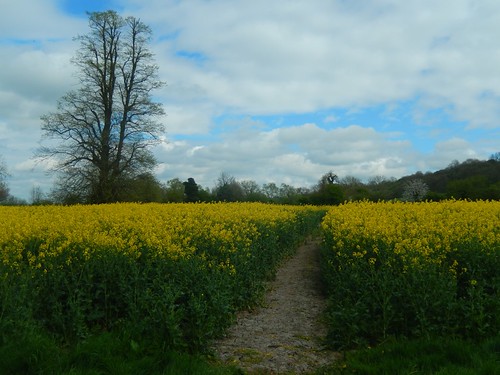 Further fields of rapeseed lay ahead, with a clean path cut across them. 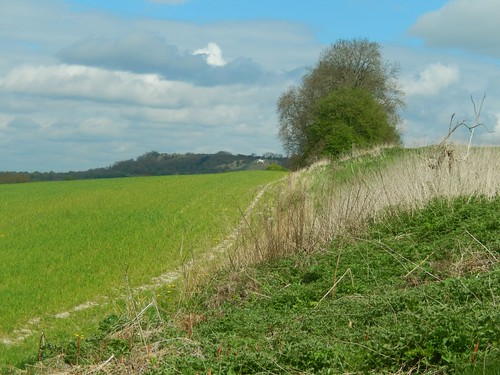 Nearing the roads that would lead to Broad Town, I could see the Broad Town White Horse on the hillside ahead. Soon enough, I’d be passing right by it. 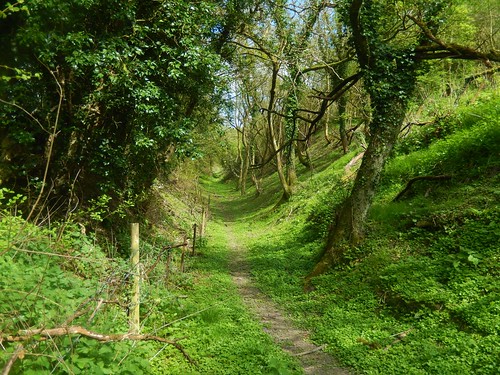 A steep climb up through the woods with follow, beyond an unmarked path junction where I took a gamble and ended up where I’d hoped to be. 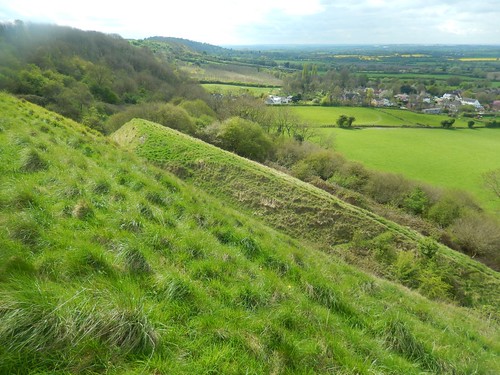 It was almost like a hillfort, in this area marked as Open Access Land. Here I was, now overlooking Broad Town and the pancake Wiltshire landscape.

It was above Snow Hill and en route to the White Horse that I encountered a second discrepancy of this walk, where the OS map contradicts the waymarks, and vice-versa… 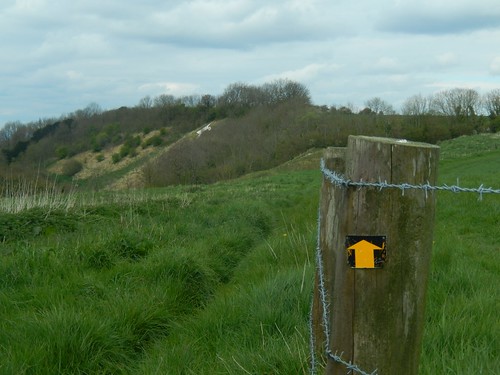 According to my map, the White Horse Trail follows this yellow arrow; maintaining height along the cliff top, as far as a narrow valley that descends to a point beneath the chalk figure.

However, the White Horse waymarks on the ground lead you down away from this elevated route, along a path that doesn’t even feature on the map… I’m sure both points lead to the same place but I wanted to do things as accurately as I could.

It’s possible the way has been redirected to make it slightly easier.

Before descending along that combe, I made the mistake of staying within the boundary and following what was probably an animal track… 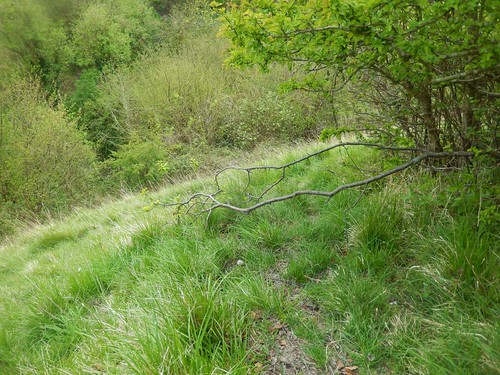 After carefully cornering the cliff edge and meandering around these branches, I arrived at a wire fence. Further down the slope, I met only the same, with a cottage now visible beyond… It was back up the hill I must go; almost taking an unfortunate tumble along the way. 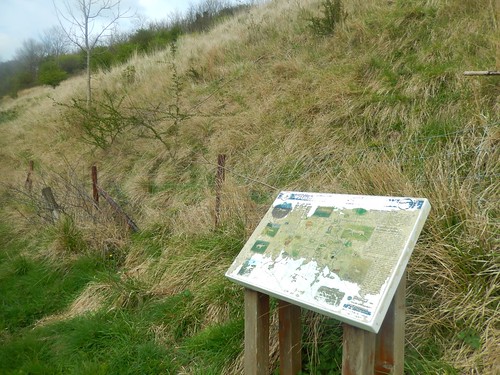 From the right path, I arrived at this tired-looking information board for the chalk figure. Sadly, the other board I’d find on this walk was in a similar state. 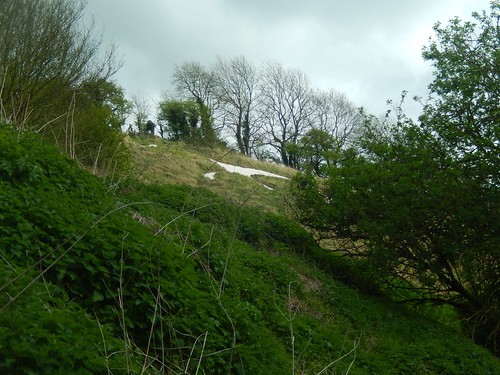 It’s not at all easy to see the Broad Town White Horse from so low down. As with most of those I’ve seen so far (I think this was No.4), they are best viewed from further away. Apparently, that didn’t stop two group members from scrambling to the top, weeks earlier! 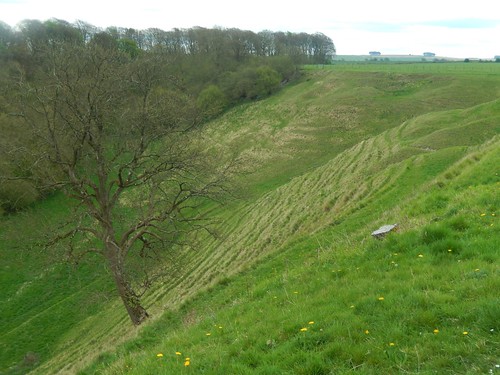 There was a little bit of confusion and hesitate about the way forward from Littleton Farmhouse but I ended up on the right path and soon reached the site of Bincknoll Castle, which was once a hillfort. 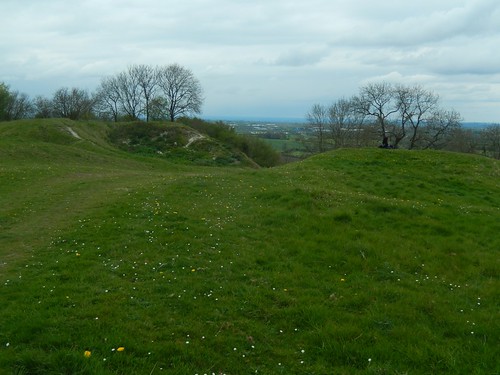 A young family was up here, enjoying an afternoon out. I’d also past an older group of gentlemen who didn’t seem to certain of where the were, their way forward (or willing to admit as much as ask for help). 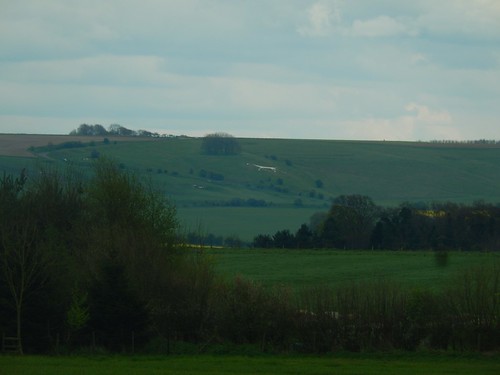 From here, the White Horse Trail makes an about turn to the south, with the Hackpen White Horse (and the finish line) visible from a distance of only a few miles. 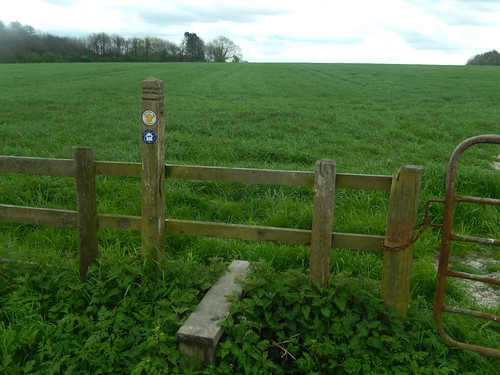 While the waymarking ahead was good, I had to cross two fields of thick grass (almost up to my knees) where no identifiable path had been created. It was hard work and I could mostly follow vehicle tracks across field number three. 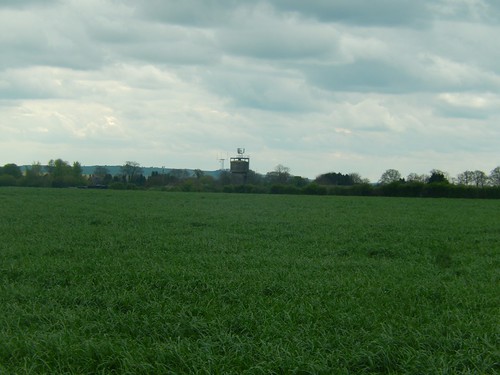 This radar-like construction was away to my right but there’s no indication of it on the map. 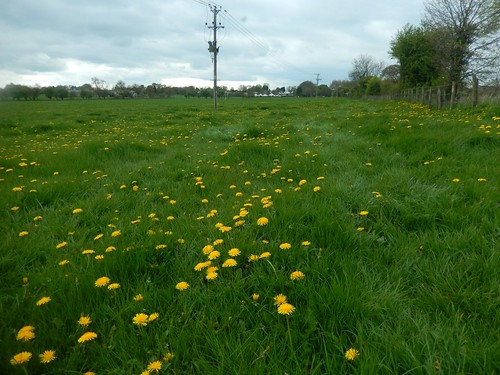 Soon enough, I was walking in to Broad Hinton.

Several years ago, I used to know someone who lived here and he was employed by The Ridgeway to lead a team of volunteers in maintaining and replacing all kissing gates, stiles and finger posts along the trail.

This was probably up until six-years ago. I wasn’t in to hiking then and didn’t really know or appreciate what The Ridgeway was… 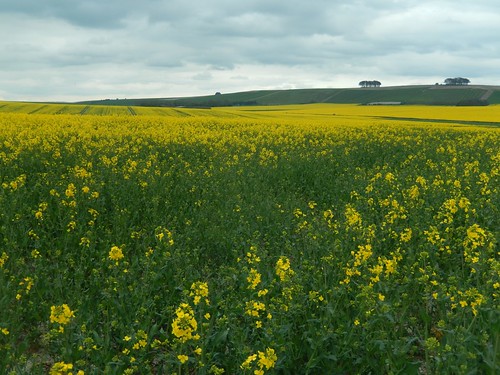 Beyond the local pub, I was walking beside more fields of rapeseed. This section also features a bridleway that had clearly been chewed up by horses through the winter. Now, it was a hard, dry ankle-twisting mess. 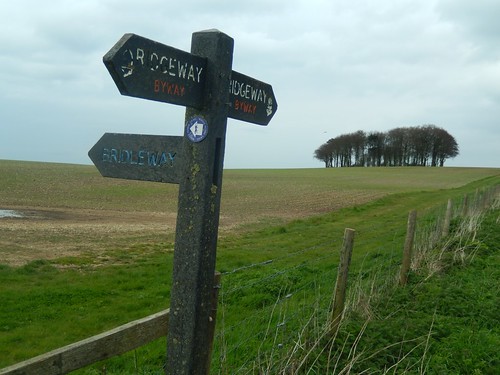 It was a bit of an effort, so late on, to return to the top of Hackpen Hill. But, I had made it; the longest solo walk I had done for many months and another notch towards completing the White Horse Trail. 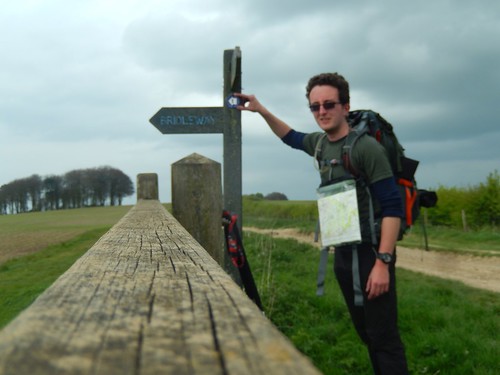 I wasn’t feeling any ill effects from having carried a 12kg backpack for all of nineteen miles. I’d felt the occasional twinge in the ligaments of both knees during the second half but then, I’d been reluctant to actually use my walking poles because of the map already hanging around my neck.

Unlike my smaller Osprey Manta 28 AG backpack, the rucksack did not ‘squeak’ even once. 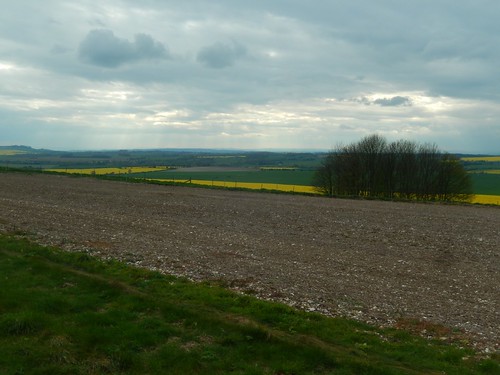 I’d started this walk at 9.30 and finished at 17.30. I had hoped to be back a bit sooner but wasn’t displeased with my pace. 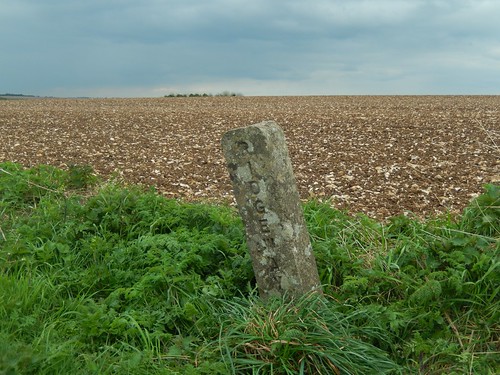 Total distance of this walk: 19 miles