A walk centred around the Uffington White Horse in Oxfordshire. We tackled this one after completing the White Horse Trail around Wiltshire.

As if it wasn’t enough to have visited all of the Wiltshire White Horses across 2017, Jo had one more in store for us, just over the border in Oxfordshire.

We drove east along the M4 motorway, one last time. Departing for Swindon East, to later arrive the the pay-and-display car park (free for National Trust members) at White Horse Hill. 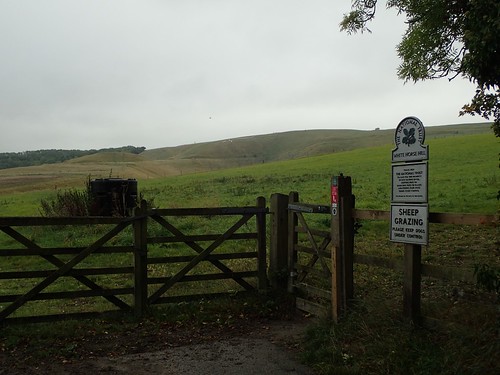 Naturally, we would leave the discovery of the White Horse itself until the very end! Our walk began heading north, crossing the B4507 and on towards the village of Woolstone (I’m assuming as much, as I wasn’t closely following the route on the day). 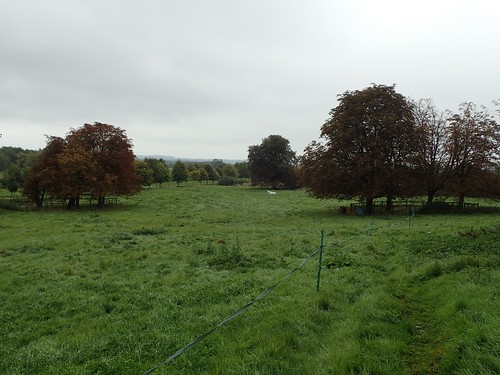 I reckon we then turned west; passing the village of Knighton before Compton Beauchamp… There was a white horse but not the one we had travelled to see. 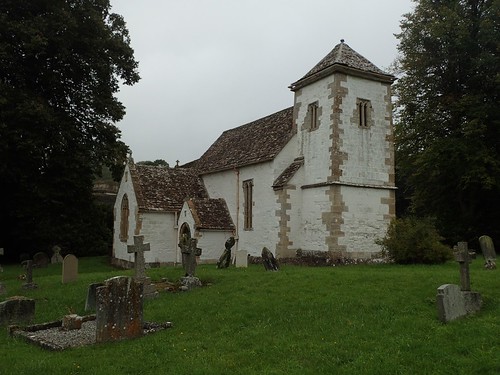 Perhaps following the D’Arcy Dalton Way  [no, I’d not heard of it until now, either], we past the beautiful St. Swithun’s church – which is actually indicated by the symbol for a chapel, on the Ordnance Survey map. 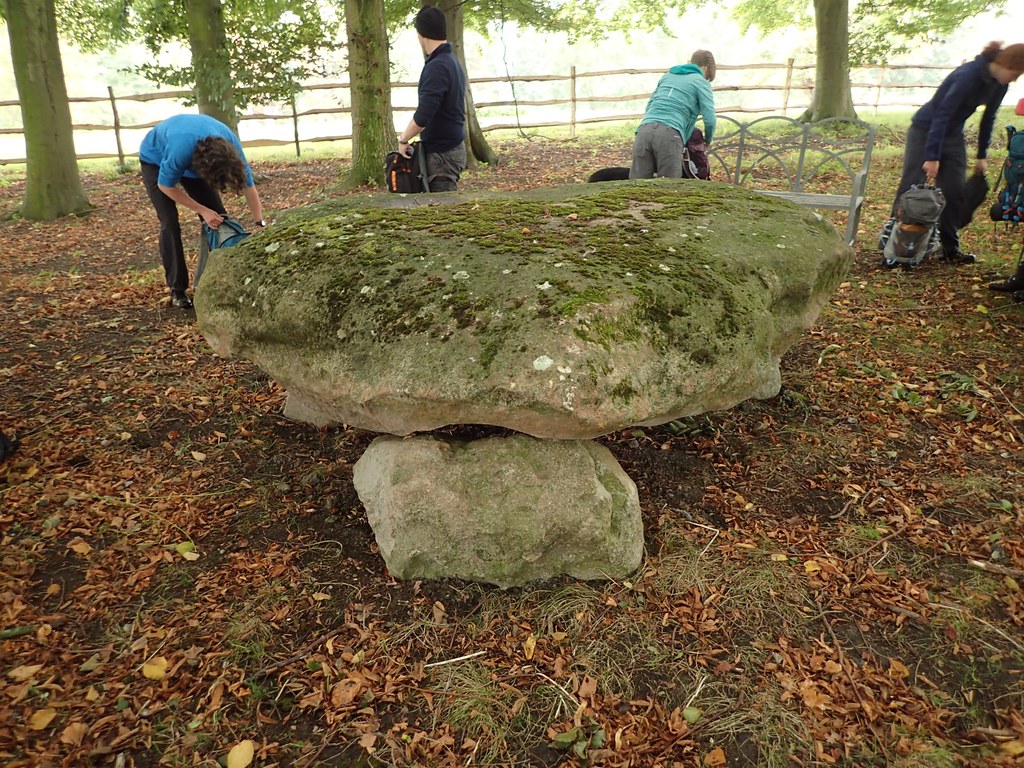 Just up the hill from there – and possibly within Windmillhill Copse – we took a brief diversion from the right of way to gather around this rock formation within an enclosure, for our first break of the day. 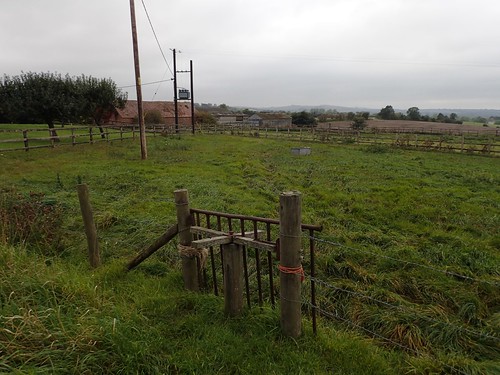 Onwards and refuelled, we met a wooden turnstile that had tragically been immobilised by a steel grate. This was possibly near Odstone Farm and it’s precisely the kind of issue that should be reported to the local authorities.

Most people opted to backtrack along the fence and take the longer walk around, while a few us were lanky enough to be able to step over, without causing any great damage!

I can see the grate’s purpose in keeping livestock at bay and I would hate to see such a relic, as this turnstile is, removed… But this must be a better solution that the landowner could take without obstructing the public right of way. 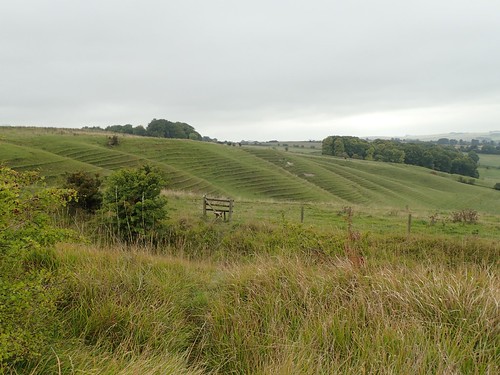 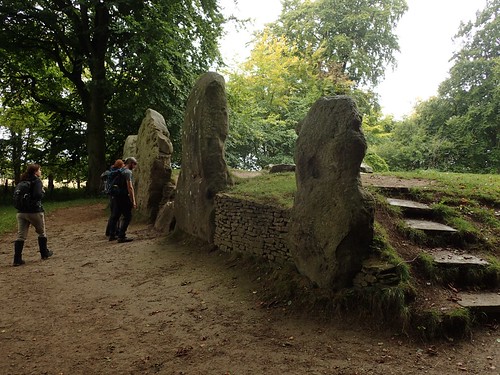 After climbing Odstone Hill, we would join The Ridgeway – the long-distance path I aim to walk in 2018! 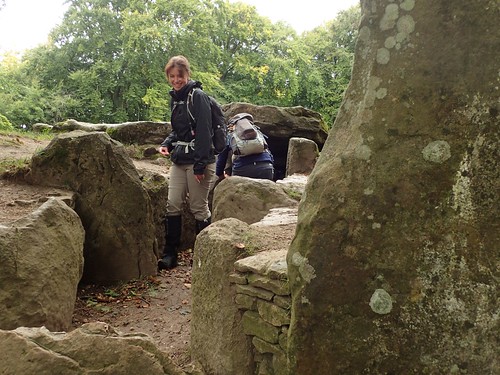 Just off the trail, we’d discover Wayland’s Smithy – a Neolithic long barrow and one of the most impressive examples across the region. All before stopping for lunch. 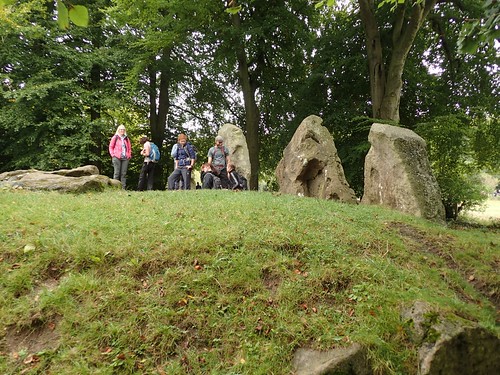 There’s a suggestion that this site was the inspiration for the naming of a certain cartoon character from The Simpsons… I’ve no idea whether that’s true. 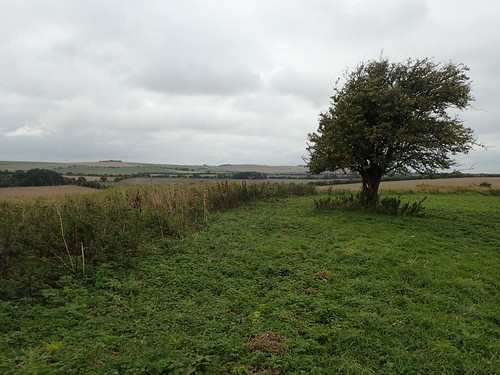 After lunch, we briefly followed The Ridgeway in a south-westward direction before leaving the trail to head further south on to Alfred’s Castle; the site of an ancient settlement and hillfort. 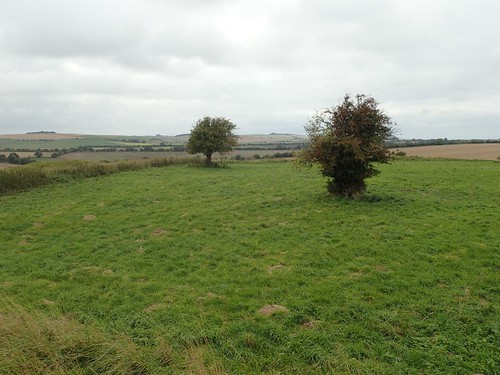 This area isn’t marked as Open Access Land but a public footpath runs right beside it and there’s nothing to prevent people from walking all over it. 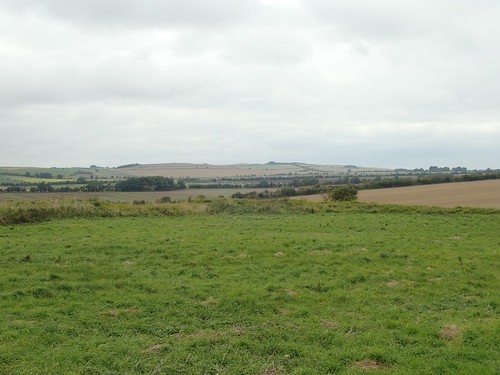 From here, the surrounding landscape was quite flat and unpronounced. I typically associate Oxfordshire with ‘The Cotswolds’ and, well, I was expecting to see more hills and ridge formations. 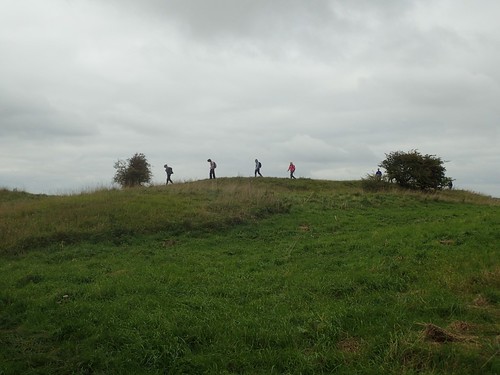 Here are a few members of the group, unknowingly re-enacting one of The Beatles’ album covers… 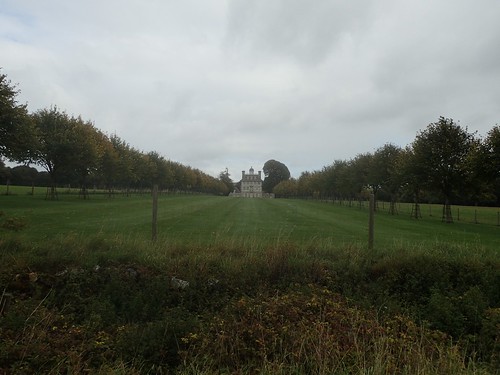 Moving on; our walk would lead us around the border of the Ashdown House estate – another National Trust property that I’d never heard of. 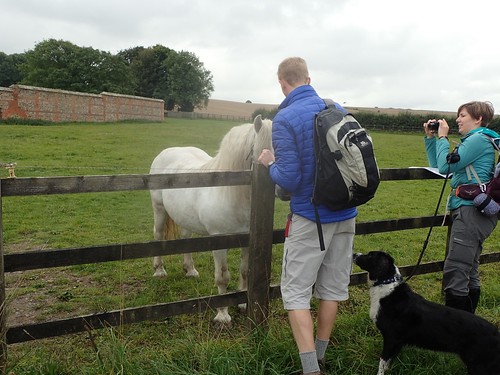 Across the road from the main entrance to the house, a second white horse was willing to greet us from nearby Ashdown Farm. Still, this wasn’t the one we were ultimately searching for! 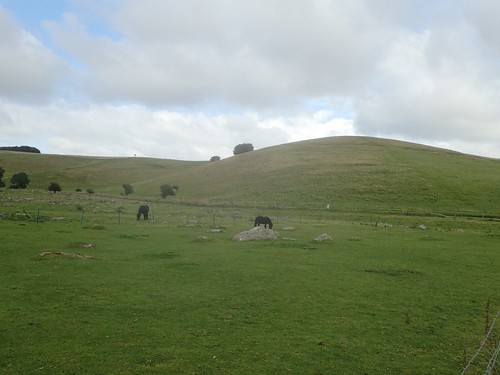 As we approached to cross the B4000 road, Matt and I were surprised by the sudden presence of these large rocks across two local fields. Limestone, perhaps. I thought of Velvet Bottom, a steep-sided valley on the Mendips… They don’t appear to have held any significance as boundary stones.

Why and how are they here… But, nowhere else? 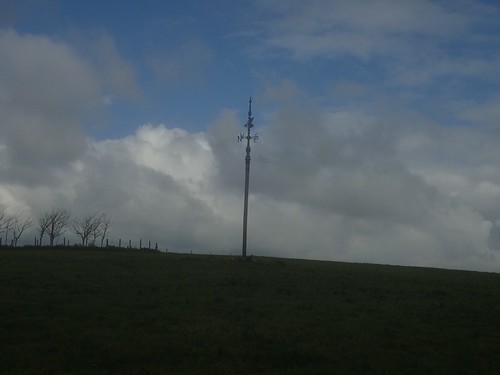 We climbed to the top of Weathercock Hill, before continuing in a mostly northward direction towards Wayland’s Smithy. 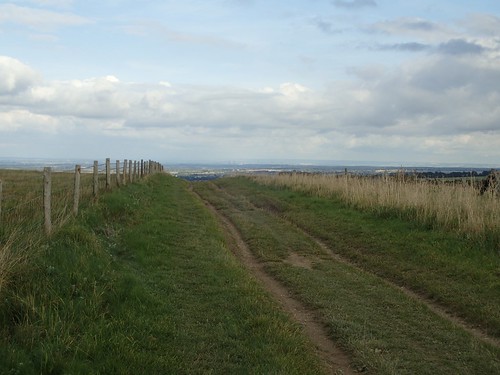 Somewhere around twenty-five miles from the western start point at Overton Hill, it is said that this is where the track-like terrain of The Ridgeway begins to improve towards something more comfortable under foot…

Had I proceeded to walk the trail in September, as initially intended; this would’ve been the end point of my first and longest day! 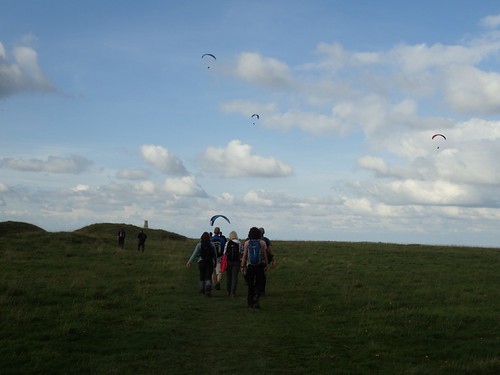 Leaving the National Trail for one final time, we turned on to White Horse Hill and headed for the obvious trig pillar. 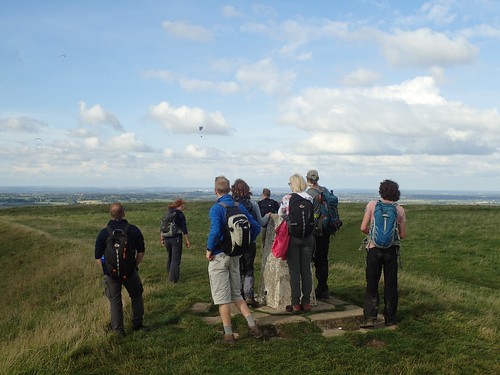 At 261m above sea level, White Horse Hill marks the highest point in Oxfordshire, apparently! Again, I’m surprised by this, knowing that the Cotswold Way starts or ends in Chipping Camden, west of here. 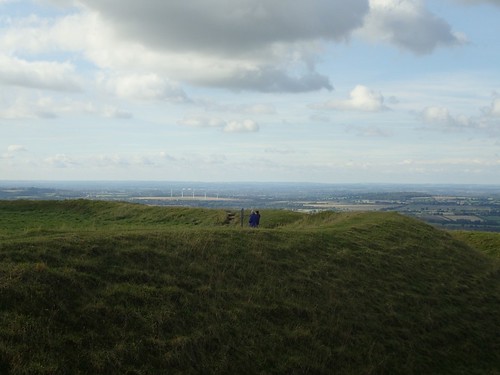 Uffington Castle, another historic hillfort, can also be found on this site. Land here is owned and maintained by the National Trust, with a freedom to roam all over. 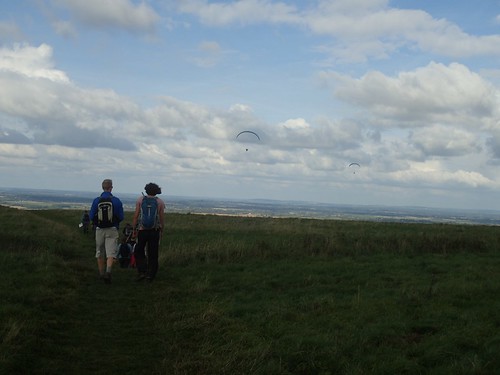 Like many parts of Wiltshire, this was a popular place for paragliding. 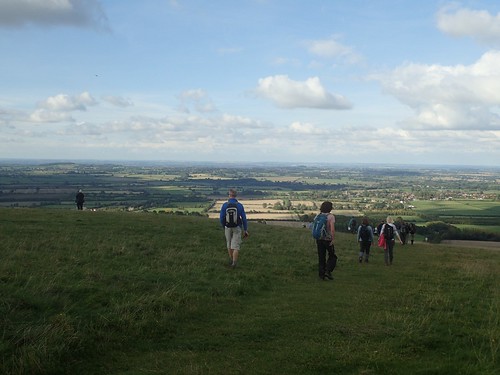 Otherwise, the landscape north, from Uffington and beyond Faringdon was about as prominent as a pancake. 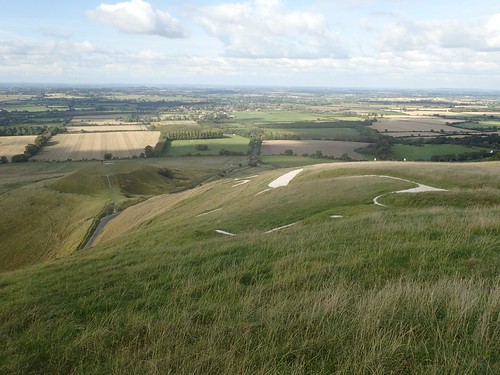 Uffington’s White Horse, with its slender outline of a chalk figure, is very hard to see when you’re standing over it, looking down over its head and torso. 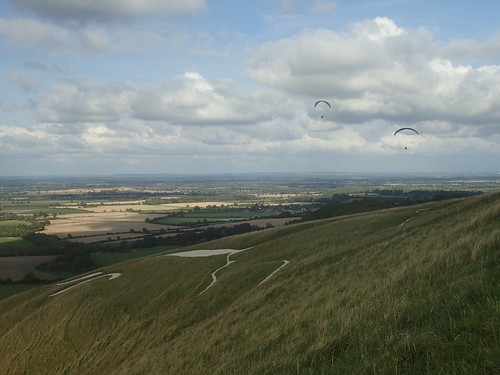 I found it as challenging to take a clear photograph from further down the hill… For the clearest picture, it’s probably best to find a quiet road to the north and pull over. 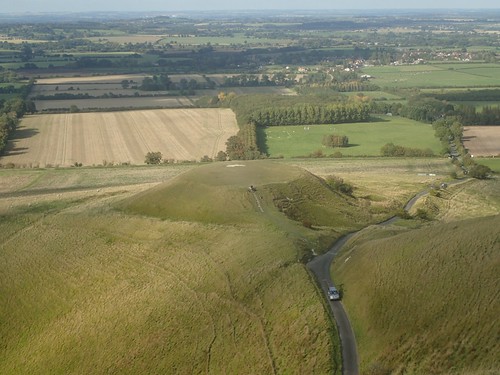 Another prominent hill feature lies nearby. I’m not certain of its name but it is incredibly flat-topped. 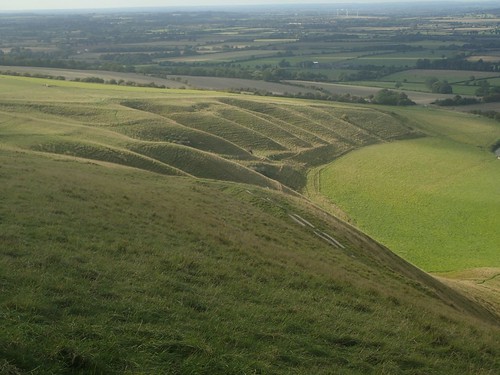 Again, the landscape here was one to admire, especially at this time, with the autumnal light beginning to fade. 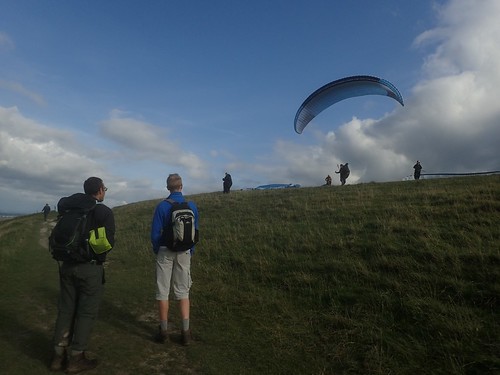 While the majority of the group marched on and downhill towards the cars, a few of us decided to pause, waiting for the imminent flight of paragliders.

I can’t remember whether the wind was working against him or, whether he didn’t gain enough height or speed on take-off; but this man’s feet found the ground very soon after launching. 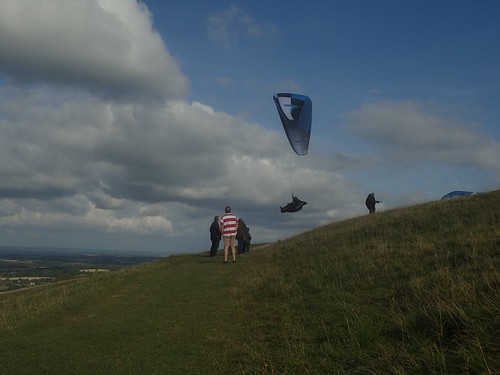 No spectators were harmed!

There it was; the end of our final White Horse walk for the year and another ancient chalk figure in the bag. For a number of us and, myself included; this was our first ever walk in Oxfordshire.

Distance of this walk: 11 miles