This was my third visit to Snowdonia and, at long last, I had made it to the summit of Snowdon – the highest peak in Wales – at the first attempt of trying.

Having overcome the intimidation of Crib Goch, we would now have to brave the likely hoard of “tourists” huddled around the trig point and this mountain’s other… Attractions. 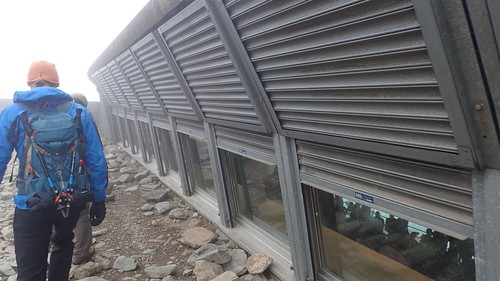 There’s a café on the summit…

You could smell the toilets from many metres away, once the diesel fumes of the train had cleared. I was the only one brave enough to take a look inside and, purely out of curiosity… While the others followed their noses to locate the loos. I saw two hundred people to my right and no glimpse of the menu or what might’ve been available to buy…

Looking on Google images now, I can see there would also have been seating to my left. But for the many, many people seeking refuge from the sub-summer conditions outside. Or, just waiting for their return journey down to Llanberis. 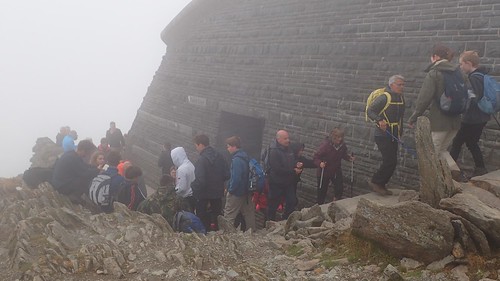 On a ratio of Shorts to Trousers, at least the majority of people I saw outside appeared to be reasonably well prepared for the conditions. Many of them had, hopefully, walked up; regardless of which path they’d used. I think there’s a risk of people jumping on to the train and not giving full consideration to the change in conditions at a higher altitude.

It’s (supposed to be) a mountain, not a hill!

I still could not believe how many people were present… Young, old and those of us in between… On a Tuesday afternoon in July… Thanks goodness, we hadn’t attempted this on a weekend!! 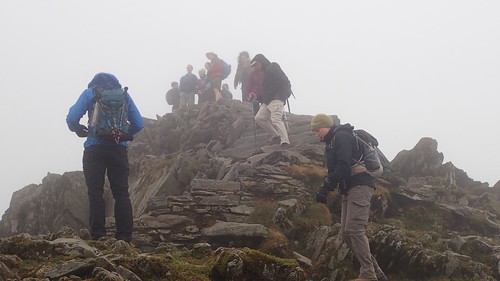 On YouTube, I’ve been watching a number of videos from people who go hiking in the greater mountains of Europe. Even at two or three times the elevation of Snowdon, you do not encounter anything like this. At best, you’ll find a refuge shelter with basic of accommodation for an overnight stay.

I almost wish we had something similar and smaller on Snowdon… Anything but this! 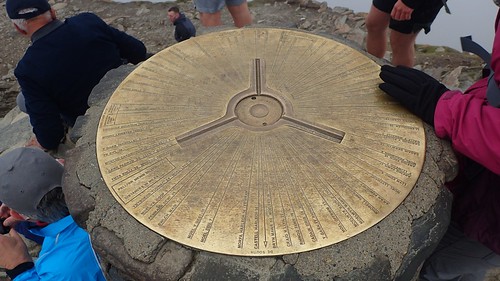 I also find it odd how the trig point is elevated above a series of steps; one leading up, the other leading down and away from the queues, patiently awaiting their turn.

Was this a natural formation or did someone build this rise to elevate the summit more clearly above the tops of all other Welsh mountains? 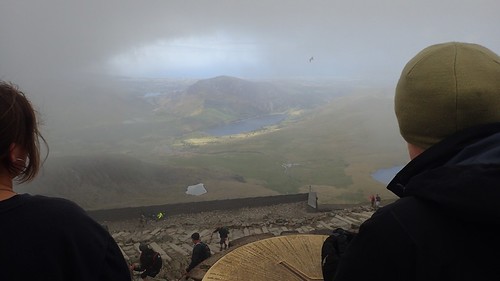 There was no time to read each of the inscriptions on top of the golden trig point, sadly. I was barely able to even lay my hand on it, with so many others around. I could recognise that a number of people were also waiting, which is why I was happy to step off and move along.

But I found it odd and almost rude, how two older gents were determined to sit beside the pillar. Perhaps one day, the National Park will have to employ a steward to instil order during the summer months! 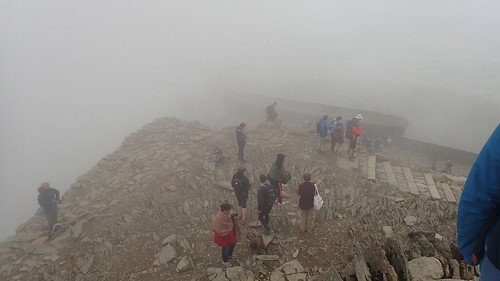 It’s fair to say this wasn’t my most enjoyable summit experience. I’m pleased to have finally ticked Snowdon off but I’m reluctant to hurry back to it anytime soon. I have two more of the Three Peaks still to claim. 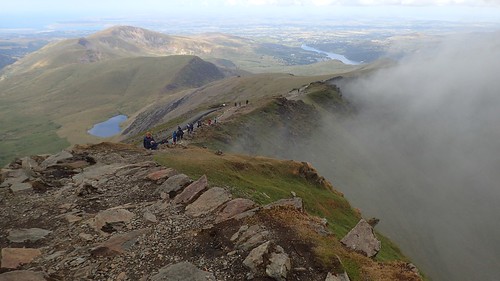 When people do the crazy, twenty-four hour Three Peaks Challenge, I know that they climb one of the mountains in the dark of night. If that is Snowdon, you can at least guarantee it won’t be over-run with visitors. 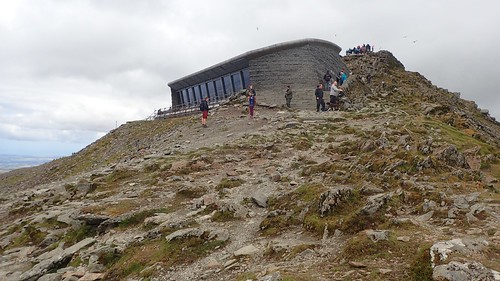 People continued to spew out of the bunker-esque café/visitor centre. I would’ve been curious to see what items they sell, as I did spot one man wearing a ‘Snowdon’ or ‘Snowdonia’ baseball cap. I’m genuinely surprised they don’t charge you for summit photos, considering you apparently have to pay to have your photo taken next to a sign post at Land’s End in Cornwall (which isn’t even the true southernmost point, I might add). 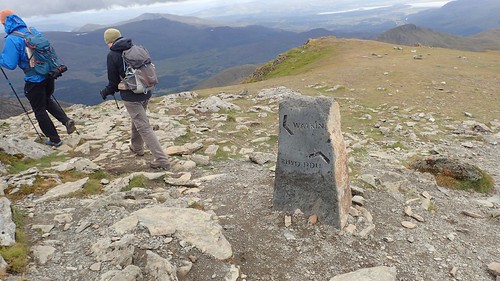 Pressing on with the Snowdon Horseshoe route, we would join the Watkin Path from the clear waymark stone and begin our descent from this madness. 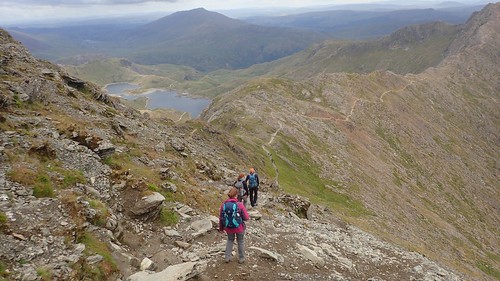 When I came close to leading a group walk up here in May last year, the Watkin Path was an option that was recommended to me, in favour of the Pyg and Miners’ tracks, which both attract many visitors. My return route would’ve been along the ‘South Ridge’, which I think is Clogwyn Du, before rejoining the Watkin Path.

But that didn’t happen, as we were in the area on a Bank Holiday weekend (tourists), an hour’s drive away and the forecast was poor. Plus, I wanted to do other things. 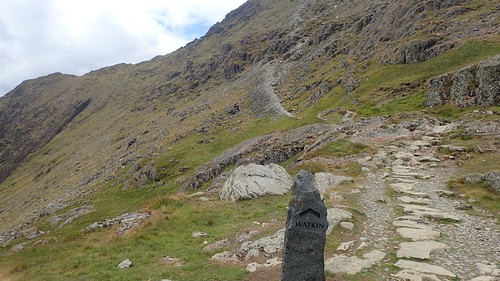 I had expected the Watkin Path to be relatively easy to follow and something akin to the Pyg Track that we had used in the morning. In places, it looks as though portions of the path are either being repaired or improved, with large rocks waiting to be set in position. With so much scree and gravel, we found this to be quite a challenging descent. 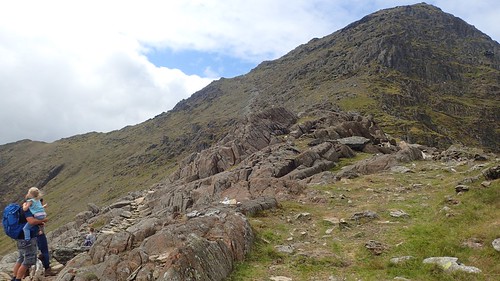 We followed this path as far as Bwlch Ciliau, where we would leave the Watkin Path, having sacrificed almost 300m in elevation by this point. I felt some concern for the couple carrying their young child up in the opposite direction. But, at least they weren’t doing Crib Goch, I suppose!

This next stage of our walk would involve short stints of scrambling, as we may our way up to the West and East Peak of Y Lliwedd and another exposed section of the Snowdon Massif where the footpath comes and goes. 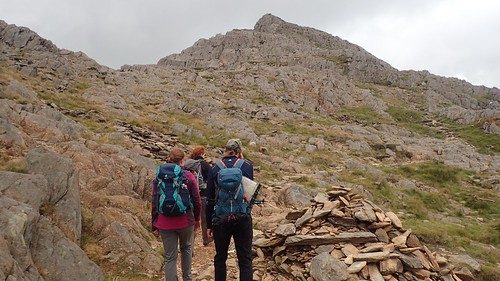 Once again, you can rely upon the presence of cairns to help guide you. 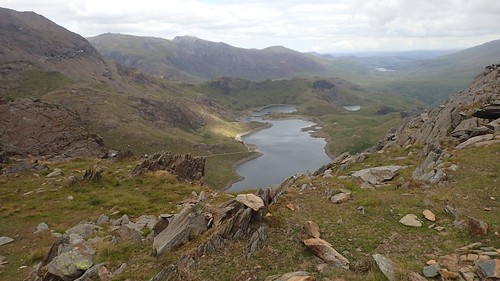 I didn’t take many photos of the actual sections of this stage of the walk. Instead, I spent most of my time admiring the view of Llyn Llydaw beneath us. 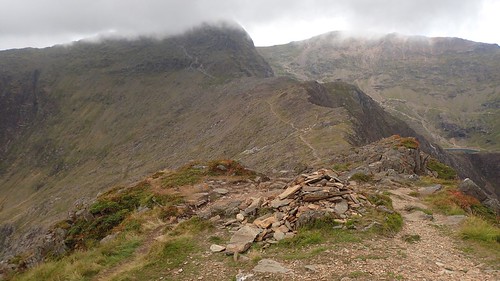 Snowdon had once again vanished beyond a veil of cloud. 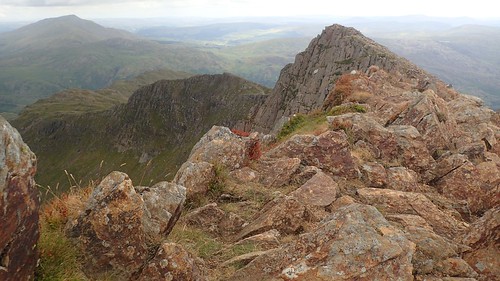 I can only recall the one group of people we saw, dedicating their time to resting upon West Peak. It wasn’t even as busy as Crib Goch. Just the way and mountainous horseshoe route should be. 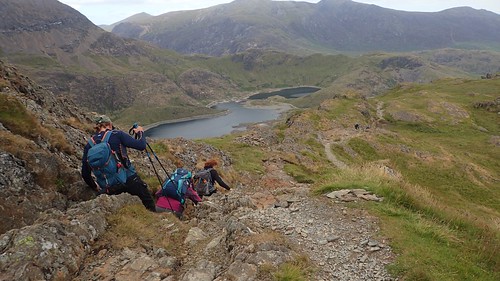 Beyond the two peaks, our descent from Y Lliwedd was another exercise in knee punishment and abuse. 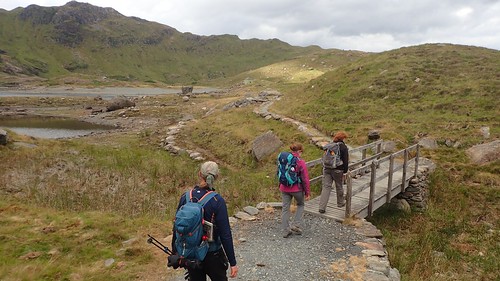 We would eventually reach a footbridge at around 450m above sea level and from this, we could follow the ‘wheelchair friendly’ Miners’ Track back to the car park. I remember the physical relief from standing on that wooden bridge and arriving at the end of what had not bee our first long descent of recent days. 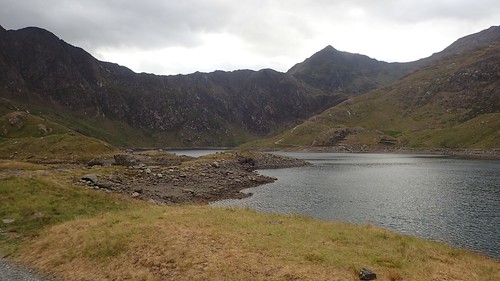 I’d found the experience of Snowdon itself to have been somewhat unsettling. I tend to avoid mountains like Pen Y Fan (the highest point in the south of the UK) during the summer as it’ll also draw in the crowds. I’d enjoyed the walk and the scrambling otherwise but that ‘itch’ remained. 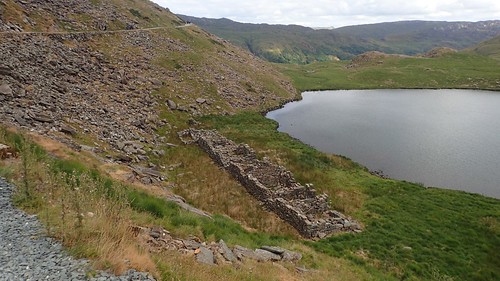 As we looped around the north-eastern end of the lake, I noticed the foundations of what looked to have been a dwelling of some sort, close by. 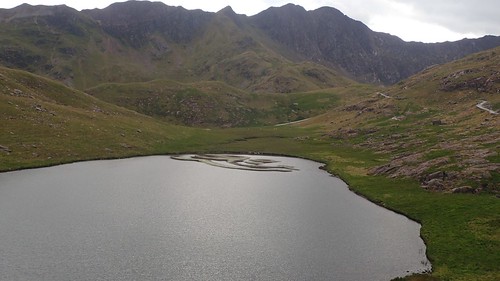 There was an odd formation of algae (well, I don’t know what else it could’ve been). From higher up, it had resembled an inverted ‘smilie’ emoticon/emoji. From this close and, viewed in the ‘correct’ orientation, it was less so. 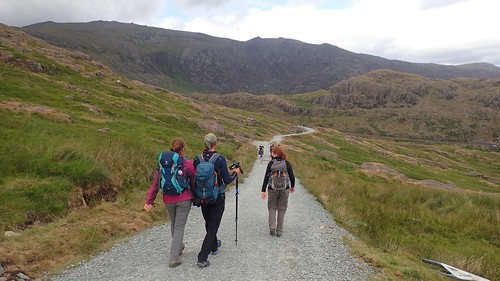 We soon made our way back to Pen-Y-Pass and the car; overtaking a group of Japanese tourists who had probably paid a considerable parking fee for a short walk to the lake and back (they definitely weren’t dressed to go any higher, to be honest). Snowdon has a lot more to offer than the inevitable bagging of its summit.

I estimate that this “walk” was about 7 miles long, although we spent most of the day here. Please don’t let me put you off visiting Snowdon and experiencing it for yourself if you’ve not already done so. Just be prepared and take precautions. …For the weather and likely number of gatherers all over the summit.