It was officially Day Two in Brunel Walking Group’s “Christmas” away weekend on Dartmoor. A second series of walks were available to choose from, ranging from long to short and I settled up on the one in the middle; said to be around 11.5 miles in length and not an unreasonable choice, given that it was forecast to be wet and windy for much of the day. 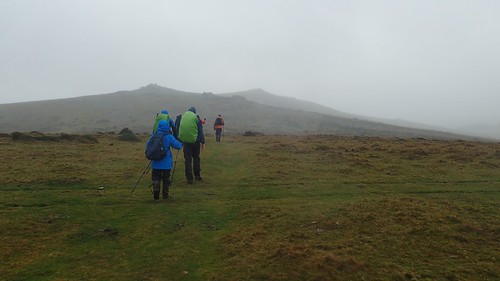 Our walk began from the village of Belstone to the north of the moor. A generously-sized free car parking area is available and, with nineteen of us up and ready for this early start, we were soon trekking up on to the greater moor. 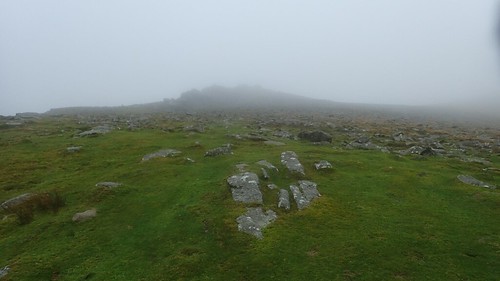 From Belstone Common, we were due to head south for several miles, following in Graham’s lead and bagging a number of tors along the way. 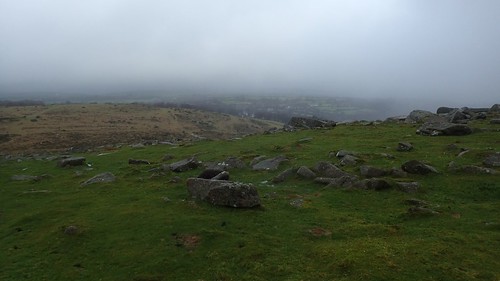 Visibility was not at it’s finest and the majority of us had our waterproof layers on before we had left the car park. Just a typical day on Dartmoor, a local may’ve told us! 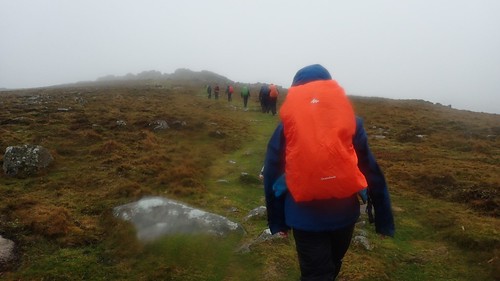 Studying the Ordnance Survey map, I believe that Belstone Tor was our first to bag on the day. 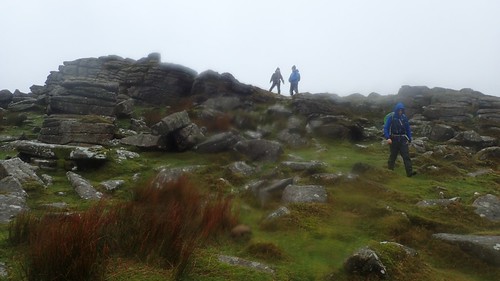 With wind gusts in excess of forty miles per hour, very few of us were brave enough to properly ‘bag’ each tor by climbing to its summit. 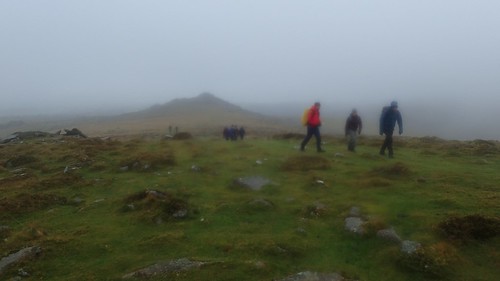 I was of the majority who chose to lay low and save the traditional act of claiming the true summit for another day with even marginally better weather. 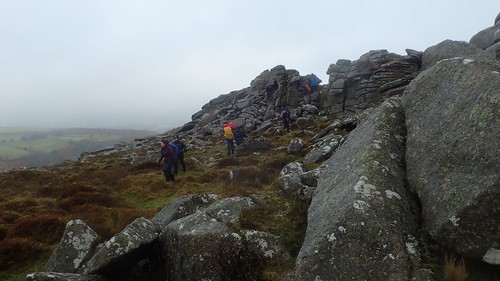 We were high enough in our pass of Belstone Tor, to be fair; having to scramble up and over in order to maintain our following of the intended path. With a group size of almost twenty members, this takes a certain amount of time. 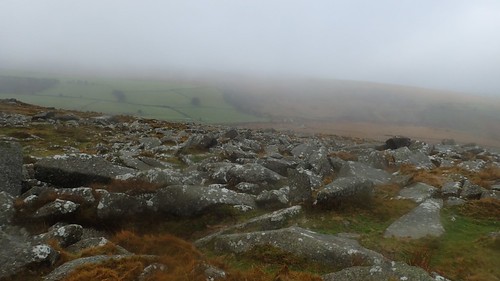 My only concern for this day was the fact that my waterproof layers were likely to fail, as they had done during the previous day. Both my jacket and trousers are less than two-years old and I did initially make the mistake of washing them in normal detergent… But I have the kit to re-proof them. I just need to take the time, once I’ve caught up again with my washing.

Someone on Twitter, who regularly spends time outdoors, told me that he reproofs his gear as much as once a month, where I’d expected you’d be able to get away with once every few years.

We then crossed through Irishman’s Wall…

It’s an actual thing, marked on the OS map! I’m not stereotyping or attempting to offend any of my Irish friends, here. Although my knowledge of this feature’s origins is absent. 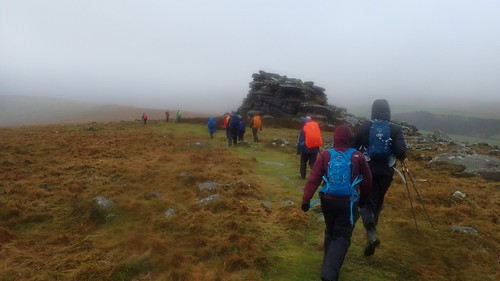 Marching on, I believe we next paused at Higher Tor… 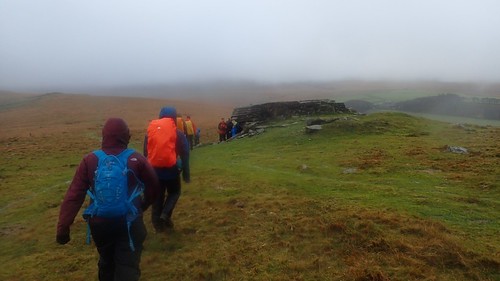 Then pausing for a wind-break at a possible an unnamed tor, just east of Henry’s Ford. 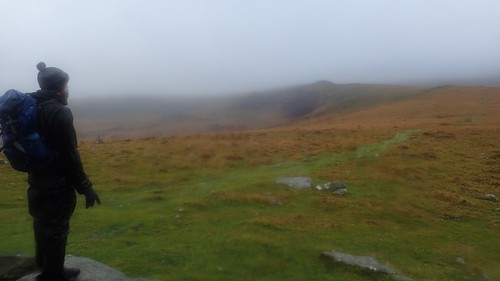 Carl (I think), taking in the view.

It was only when we reached Oke Tor, as I recall, that we decided to pause for a short break. 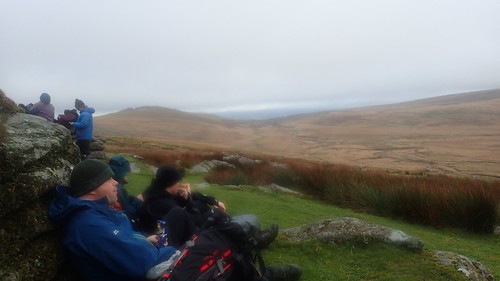 I felt as though many of us were anticipating our first proper stop, having endured the elements thus far. Oke Tor, to be fair, was probably the most accommodating spot for a group of our size. 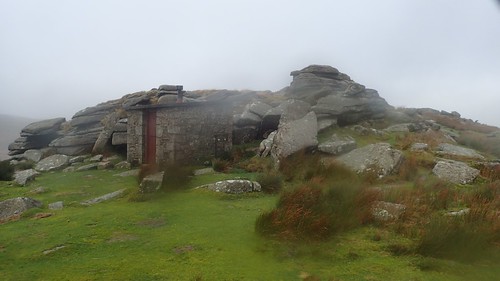 Just inside the Okehampton firing range, there was a storage building/bunker of some sort that we possibly could’ve crammed in to under more extreme circumstances. Similar structures can be found at Yes Tor and in other areas around the range, which is closed to the public on specified dates of the year. 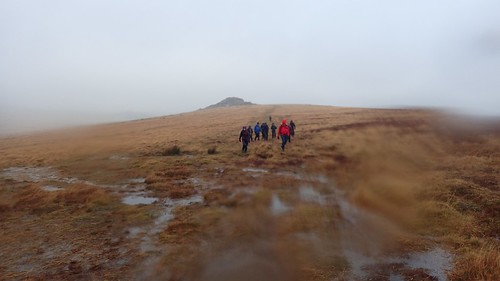 Back to it. This rain wasn’t likely to dissipate and so we soon had to march on.

Bordering the boundary of the firing range, we were walking on course for Steeperton Tor, To get there would mean having to complete our first water-crossing of the day… 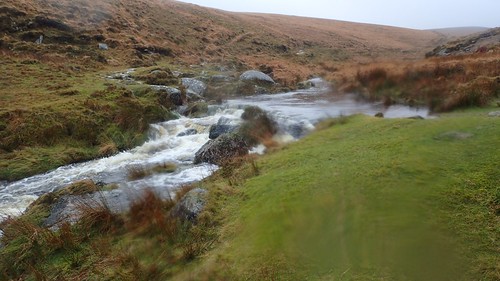 I don’t know how it looks in these photos (other than very wet) but this water was running fast and furious. Graham led this same walk with the group a few years ago but I don’t think the situation was quite like this, in the wake of Storm Diana. 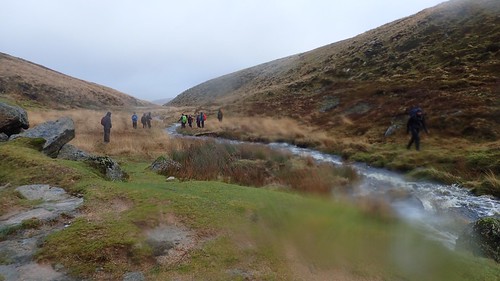 I’ve seen many people on YouTube jump across or wade through water just like this. Some will combat rivers several times greater in width! When you’re a walk leader and you have an obligation to look out for each of the nineteen individuals (including yourself), I can only imagine it’s an unsettling experience, with many ‘what ifs’ ready to consume your mind.

We seemed to divide in to two main groups, having settled upon two preferred crossing points (there is no footbridge) many metres apart from one another. 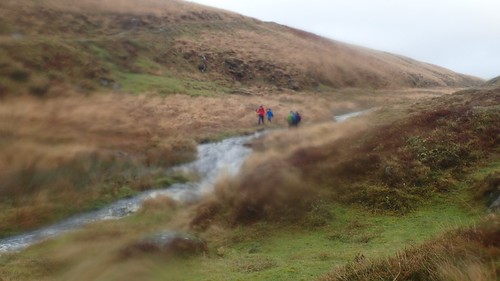 I was among the small number who manage to leap from one elevated rock and crossed to the other side, while a queue had formed and casually crossed further down stream. 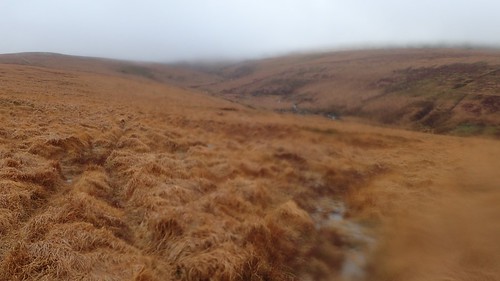 With no public right of way or beaten path to follow, we made our way up the tussock-filled hillside in search of the summit. Beneath us now, a group of Duke of Edinburgh students were catching up. 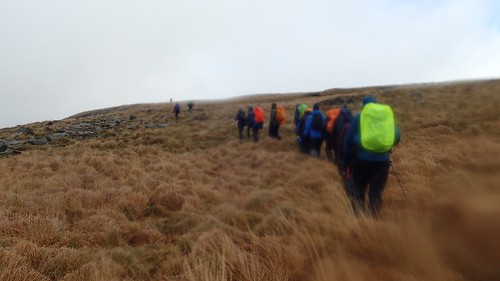 From a greater vantage point, we’d soon see that they had decided not to attempt crossing the water (perhaps at their leader’s instruction) and instead, turned back on themselves.

This was Steeperton Tor, then. At 532 metres above sea level, I believe it was the highest point along our route for the day.

Down the other side, continuing our walk in a south-south-eastward direction, we would now need to cross Steeperton Brook. 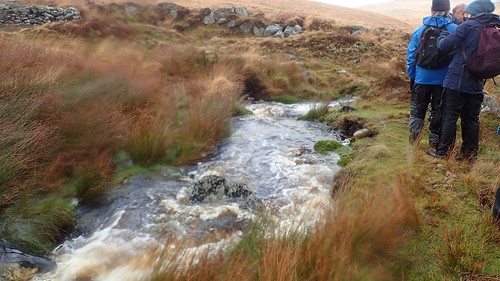 More queuing, careful foot placement and teamwork enabled us all to cross without major incident or injury. 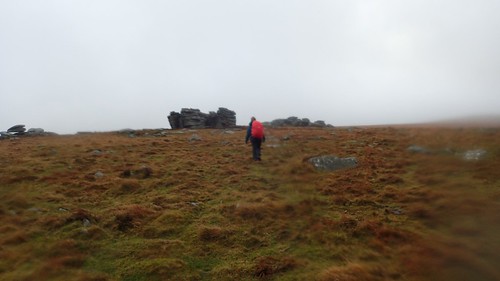 Next on our list was Wild Tor, with Sarah leading the way.

An almighty and impressive stack of granite – having a person in the foreground helps to provide the scale. It was in front of this tor that I someone fell over, damaging the camera-mount attachment for one of my walking poles (superglue later came to the rescue).

I can’t remember how or why I fell. I don’t think I slipped. I was confident in my footing going over this one rock. I think I put my foot down without looking and shifted the weight across too soon. One of those moments where you can feel yourself falling over, when you know you shouldn’t and you know how to stop yourself… But there isn’t enough time for your mind to send those messages around your body! 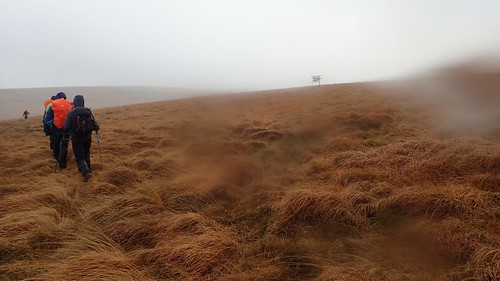 From Wild Tor, we would descend once again; passing Dartmoor’s most defiant tree in the process.

Our plan had been to cross the brook of Watern Combe and then climb up to Watern Tor… But we would’ve had to then cross the same brook a second time in order to resume our walk! Graham made the sensible choice to avoid that and instead, we stopped for lunch in this grassy area, beside the water and with sufficient shelter from the wind, if not the drizzle. 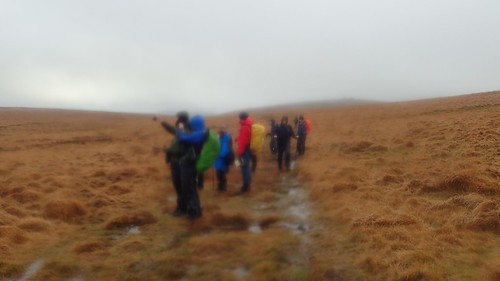 After lunch, we’d head north across boggy ground and in the direction of Hound Tor.

Standing upon firm ground, we could see a collection [I don’t know the noun for a group of people doing something you disapprove of…] of horseback riders out on a hunt, to the east of us. My photo of these individuals didn’t come out well with so much water on the lens and so, here’s a shot of the walking group, looking on.

Remember that DofE group I mentioned earlier? Whichever route they took to evade or cross the brook(s), they’d be on our tails from Hound Tor and our two groups intertwined on the way to White Moor stone circle.

Imagine it… Loads of Gore-Tex and enough colour in all those rucksack raincovers to paint many rainbows! After several hours of seeing no-one at all… Such is Dartmoor in December!

We crossed South Tawton Common, possibly bagging Little Hound Tor on the way, to arrive at the trig point of Cosdon Beacon.

Contrary to what I wrote earlier, this was our highest point, at 550 metres above mean sea level. 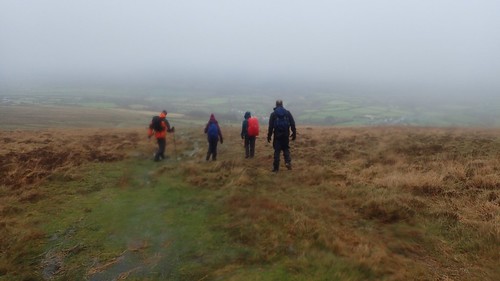 From Cosdon Hill, we could begin an inevitable descent to the north. As we fell beneath the mist and long-distance visibility looked set to return, we took advantage of the trees for an en mass overdue toilet break.

It’s possibly a factor that may not be considered by many, when proposing to lead a group of people around an exposed area like Dartmoor. While there is plenty of space, there’s almost too much freedom and very few areas in which one could comfortably contain themselves to answer that urgent call of nature.

Between South Zeal and Belstone, we’d follow the Tarka Trail along the River Taw. 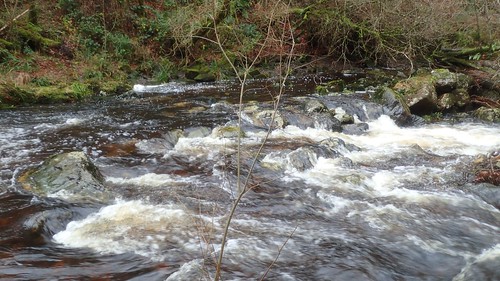 Thank goodness for that footbridge, or it may’ve been a water crossing that would’ve defeated many of us! 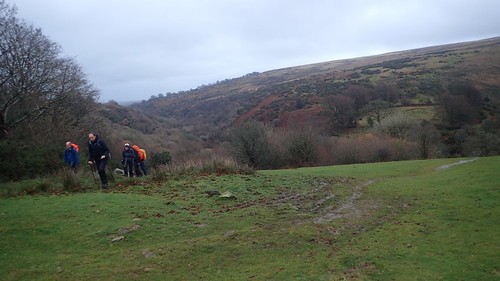 One unexpected and muddy climb up on to the common and we were back in Belstone, from which our thoughts turned to the shelter of a car, warm showers, a dry change of clothes and somewhere to hang our wet gear! For the majority of others, it was also the eve of the communal Christmas meal.

I was told that we walked 19 kilometres on this day, meaning it was pretty much bang-on with the walk description. It also took us seven hours… Which I had would’ve been an overestimation. But, given the size of the group and general state of the Dartmoor terrain, I’m impressed to see that we actually finished thirty-minutes sooner than anticipated.

While I was feeling as though our exploration of Dartmoor had only just begun, we were heading towards our final day, with the prospect of one final walk battling with the idea of evading further rain to get home early, dry-out and rest-up ahead of another Monday morning.