Less than a year after my first visit to the Berwyn mountains with three friends, I’d decided to take the walking group with me on a return to the same area, as part of a Bank Holiday weekend camping trip in Snowdonia.

What I probably didn’t make very clear is that this meant leaving the National Park boundary to begin the walk… Hence why the area is known to be far less busy than the more recognised mountains of Mid and North Wales.

Just as with my first walk here, we parked up and would start from Llandrillo, a small village to the north of the mountain range. I’d set off from Llanuwchllyn (…near Bala Lake) with enough confidence [no SatNav] to get my passengers there within thirty minutes. Other drivers had taken more rational navigational precautions (the use of phones and GPS), while I had the pressure of another driving towing behind me…

Of course, I would take a wrong turn, ignoring the familiar junction signed for ‘Corwen’ and then having attempt a three-point turn at a T-junction, with the car behind due to repeat my manoeuvre. Apologies to all other traffic on those rural Welsh roads at the time! 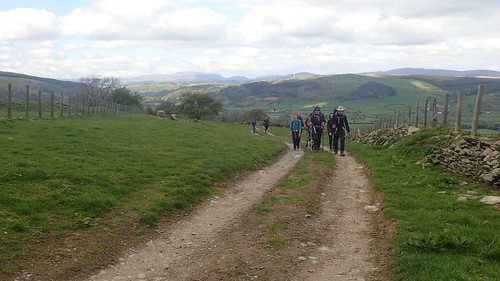 We all ended up where we needed to be, made use of the nearby toilets and soon began heading up towards those mountains. 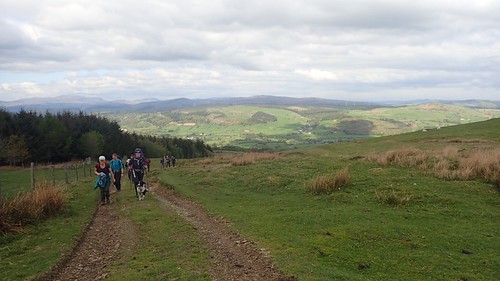 In a contrast to last year’s walk, I would guide the group in a clockwise direction, heading east initially to the base of what would become a very long climb of 400-500m spread across several miles, heading south.

We paused along the way, while still beneath the cool wind that had been forecast. Remember, just twenty-four hours earlier, we’d awoken to the sight of snow on many local mountain tops. 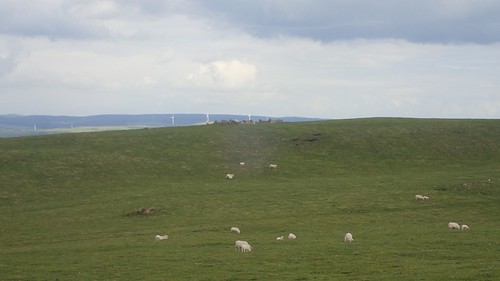 A cairn circle (circle of cairns) sits on top of Moel Ty-uchaf. I didn’t visit it last year and I didn’t fancy taking this group so far off track on this occasion. I allowed two passing hikers to explore it for themselves. 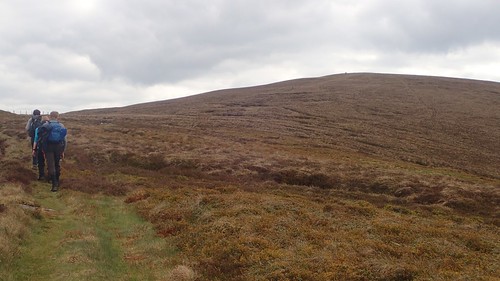 Pushing on up after our break, we’d crossed the 600m mark (in elevation) at Moel Pearce. In the photo above, you can possibly just see Matt speeding off (centre of the image) towards the cairn on top of the hill or mountain… 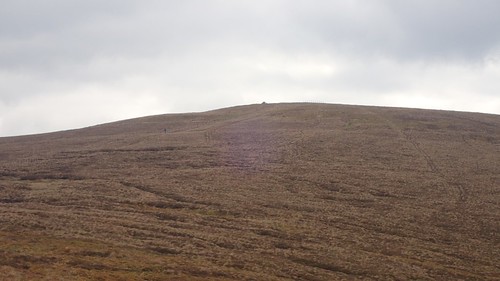 As a walk leader, there can be a sense of responsibility to always be at the front. But on routes like this, where the path and way forward are blatant, I quite like to sit back a bit and allow people to walk at a more natural pace [some aren’t meant to be tamed]. 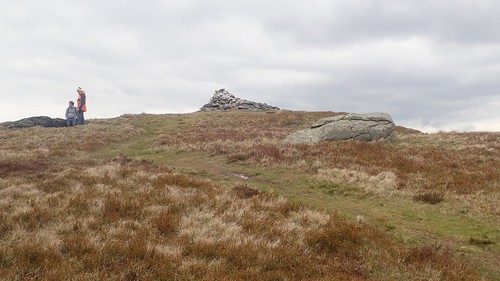 Matt would’ve reached the summit cairn of Cadair Bronwen (Chair of Bronwen) a good five to ten minutes before the next of us. 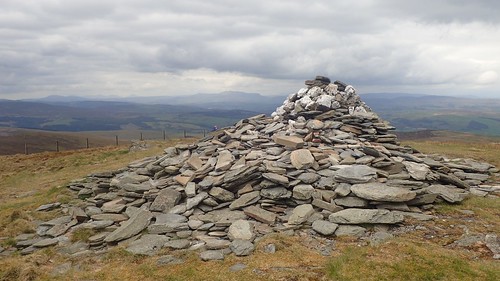 Seeking shelter on the south-eastern side, we stopped for a lunch break with a view to stopping once more before the end. I hadn’t intended to stop for long at this point but, given the conditions and timing of the day, it made sense. Our next high point was still some distance further on and I felt that it might have been too much to have asked people to continue that bit further. 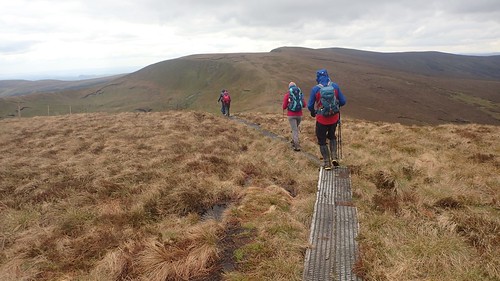 From Cadair Bronwen, we followed the boardwalk heading south (avoiding the worst of the peat) and crossing the pass (Bwlch Maen Gwynedd) before climbing once more towards the highest point in this range. 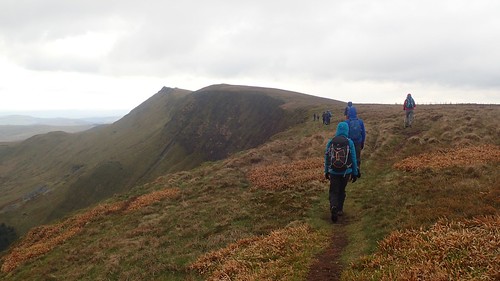 I liken this area to the Central Brecon Beacons (Corn Du, Pen y Fan and Cribyn). Except for the fact that you’ll likely encounter very few others. 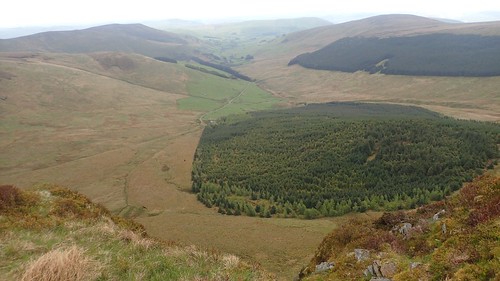 From one summit, you can almost cross to the next, while the views in between will be expansive. 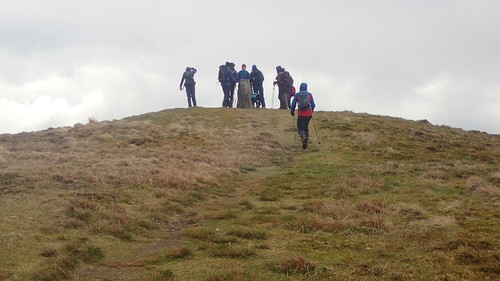 Our first and only trig point of the day would follow, at the top of Cadair Berwyn. 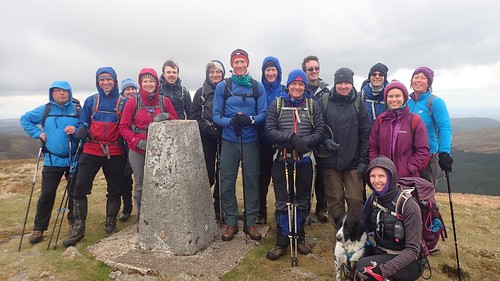 My thanks go to the mystery photographer who just happened to be passing by, while I was ushered in to handing him my camera (thankfully, no-one has ever run off in such a situation. They must’ve noticed Matt’s walking speed).

At 827m above sea level, this is NOT quite the highest point in the Berwyn mountains… 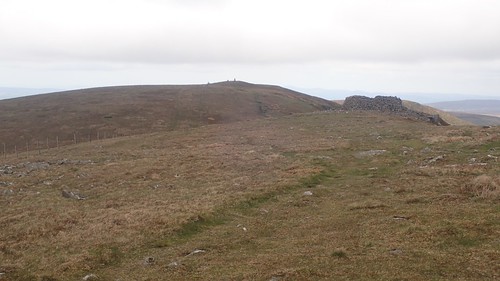 Before reaching the true high point of this area, we made use of the wind shelter for our third and final stop of the day. By this time, we’d seen tiny flakes of snow landing on our waterproof layers.

Late spring? Early summer? This was neither. 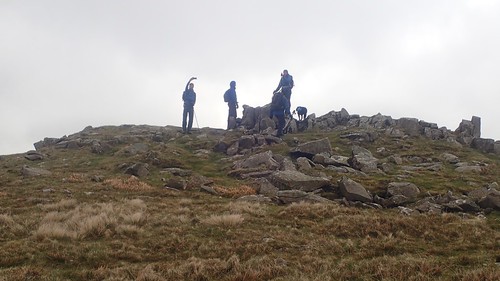 At 830m above sea level, this marks the true geographical point of the Berwyn mountains. 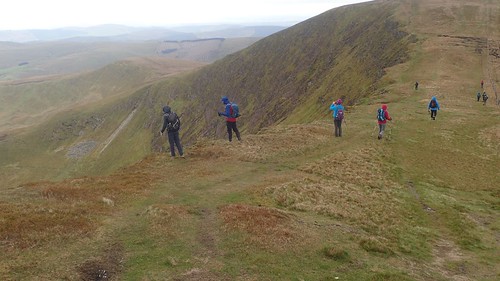 Up until this point, I’d been following a very familiar route that I’d previously followed last summer, albeit in the opposite direction. 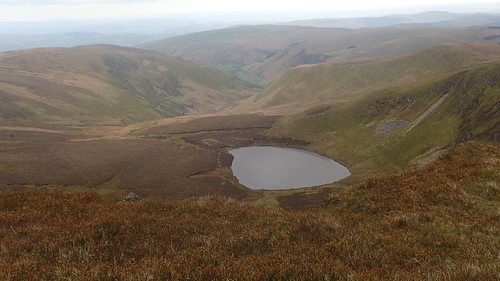 Now, as we followed the ridge towards Moel Sych and with Llyn Lluncaws beneath us, it was time for me to take a risk in getting us back to the cars…

We would spend the next couple of kilometres (possibly more) following a route that did not match up with any footpaths on any map. I’d seen this route on OS Maps… Someone else had plotted, saved and walked it. I thought it would be do-able. But I’d neglected to read the text description, that warns of ‘no path to follow’, along with boggy, uneven ground…

I just saw the results of someone else’s strife and put faith in my own abilities to navigate. People do this sort of thing all the time on Dartmoor. 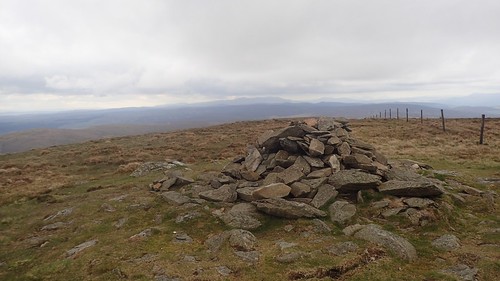 I would quickly come to regret this decision and not particularly enjoy the experience with a group following in tow. Miles of grass tussocks, patches of wet and boggy ground, no obvious path to follow and we were heading steeply downhill.

Wherever possible, I tried to follow the way of least resistance (sheep tracks). This would consequently send us too far west and too close to the source of Nant y Waun, where I’d intended to follow the not-as-obvious-as-I’d-expected “ridge” between there and Cwm-pen-Llydan. 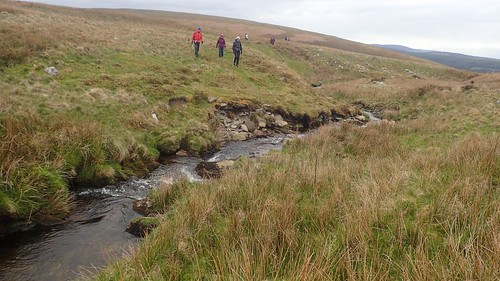 After what felt like a good hour in my fragile mind, we found a way to cross Nant Esgeiriau (I do like wild river crossings) and then Nant Cwm Tywyll before joining a welcome permissive footpath that I was also familiar with from 2018.

Just watch out for two ladder stiles that are still missing a single tread each. Had this been within Snowdonia National Park, I don’t doubt that they would’ve been repaired by now.

I hadn’t enjoyed the ‘many miles’ of bog-hopping and I was relieved that nobody was hurt or too disheartened by the tussock-tripping challenge. With a reduced group size, I might’ve enjoyed that bit more and I was honest to admit to a few people that I’d not enjoyed this section any more than they had. I have a bad habit of withdrawing from the rest of the group when I bear any doubts over the way ahead.

But as always, people often remember the real highlights from a walk where they’ve been following along.

Overall, it was good to have returned to Llandrillo and the Berwyn mountains. To have introduced the area to many new faces, including those who know Snowdonia relatively well. An important lesson learnt on the aspects of risk taking with a reasonably-sized group as well.

(I’m sure it was supposed to be less)