This would be only my second ever walk in the Blackdown Hills AoNB. Both walks have been events led and created by Brunel Walking Group, where I have simply followed along and observed… Even though I probably live closer to this portion of Somerset than ninety-nine per cent of our club’s membership!

A chance to bag a trig, reach the highest point and explore paths that I would otherwise ignore. I made the drive down solo, straight from my home in Weston-super-Mare. 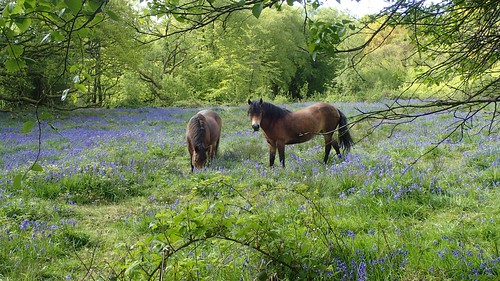 We would meet at the Staple Hill Plantation car park (free to use – ST 246 159) and begin the walk from there. It was quite a warm day, as I recall. I believe I would also equip my gaiters, in case we were to breach any wet patches, being in rural and unexplored Somerset.

I was pleased to find so many bluebells around the woodland, where people across social media had otherwise been reporting on how this beautiful aspect of spring had already departed for another year. 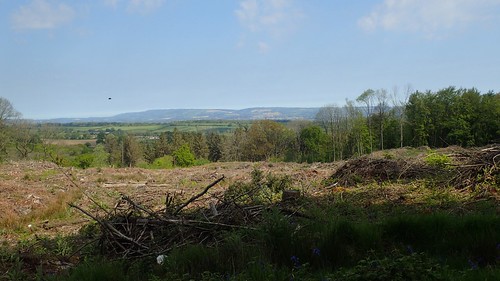 We began somewhere around 230m above sea level in elevation and, when a view presented itself, I’d like to say that we were staring the the southern edge of the Quantock Hills – another AoNB that I do visit frequently and know very well. But I could not be certain then and I cannot now.

All I can promise is that Somerset is not nearly as flat and featureless as some ‘outsiders’ may expect. 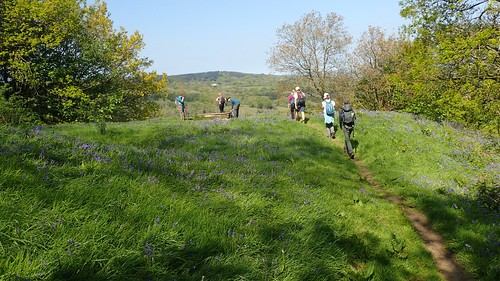 Having sacrificed some of our early elevation, we’d have to climb to reach the first viewpoint (and snack stop) at Castle Neroche. 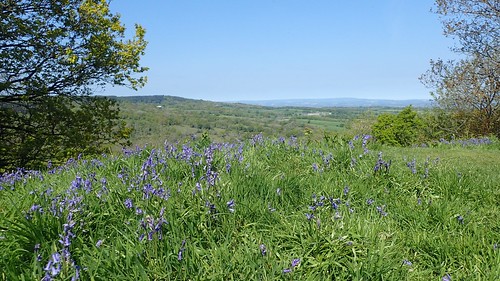 Unfortunately, there’s no actual castle here… It is the site of a former motte and bailey. Taking a guess… I’d say that we were looking south, possibly south-eastward from this vantage point; across the Blackdown Hills and towards Devon.

I could be wrong! 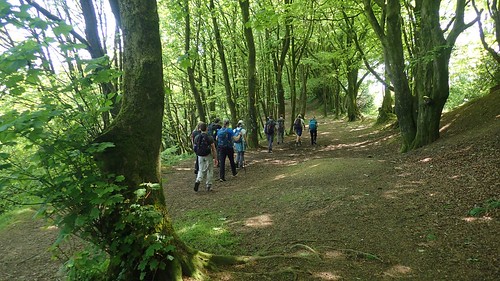 A shady path through the woods would keep us cool beyond our stop. 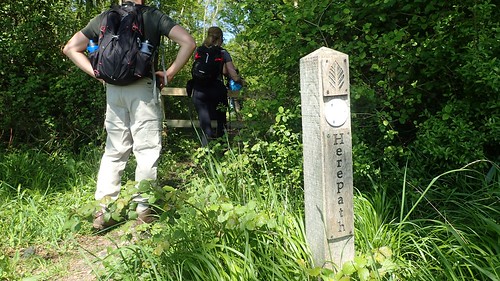 I should mention that we were following the Staple Fitzpaine Herepath Trail on this day. One of those trails of reasonable-distance and not a million miles from home that I’d never encountered before. Our walk was stated as being 14 miles in the length, while the link above suggests the circular trail is only 13.5 miles long. 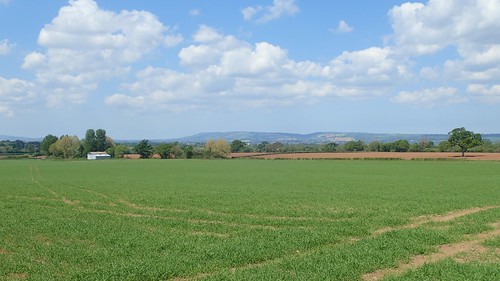 Further views of those hills. I find it hard now to believe that they might’ve been the Quantocks, as both the M5 motorway and Taunton would have to exist in the foreground. 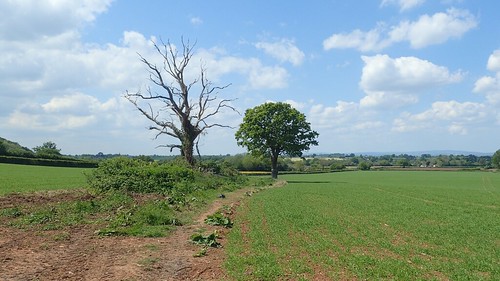 Our second lunch stop was at the edge of a field (not pictured) with some shade from the line of trees overhead. We were almost sat along the right of way and I remember a horse rider (with a nervous steed) having to negotiate our line of seating. 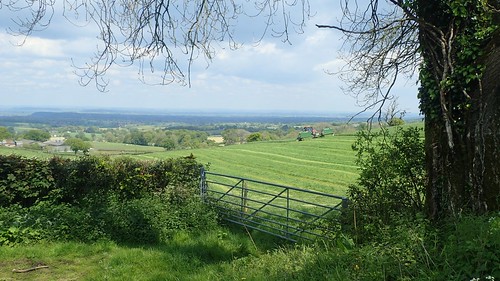 By this time, following the Herepath in an anti-clockwise circuit, we had still yet to bag the trig pillar on the highest point in this AoNB… This meant heading uphill!

I wanted to believe that this view was pointing towards the familiar Mendip Hills… But again, I cannot be absolutely certain. 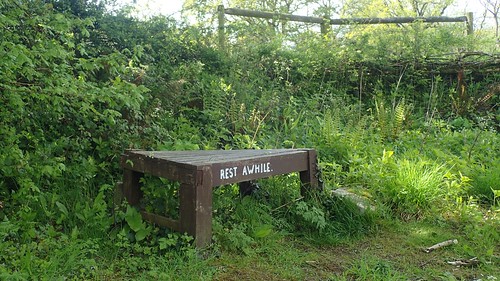 We were almost back at the cars when Jenny led us off and away from the blatant path and in to the plantation, trusting in her GPS device… 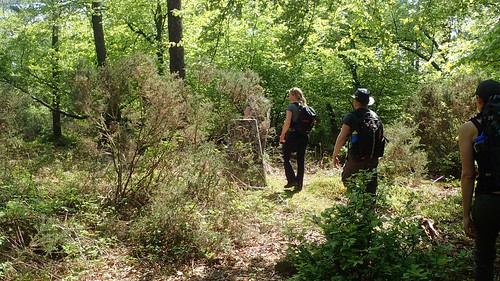 In a bit of a team effort (everyone spread out, eyes open…) we found the Staple Hill trig point sitting 315m above sea level – that’s only 10m lower than the highest point on the Mendips. 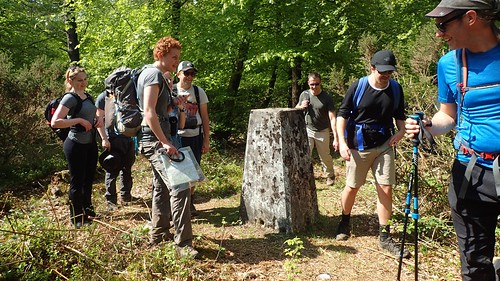 You’ll have to use your imagination and pretend that the surrounding woodland did not exist seventy or eighty years ago, when this concrete pillar was probably installed and surveying the landscape from this location would’ve made greater sense. 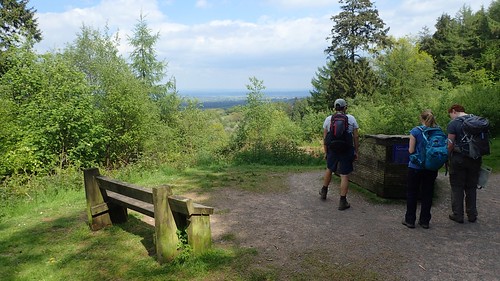 Given the option of choosing from two paths on our return to the car, no-one voted for the easiest paths. 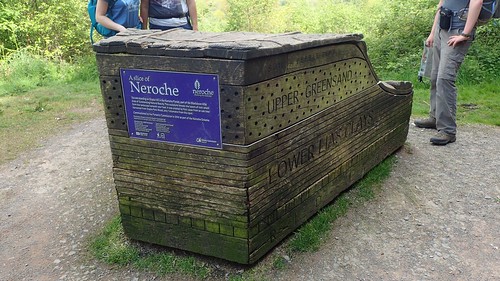 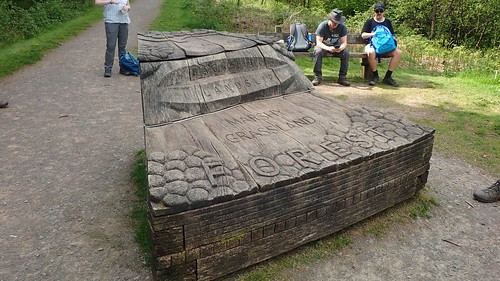 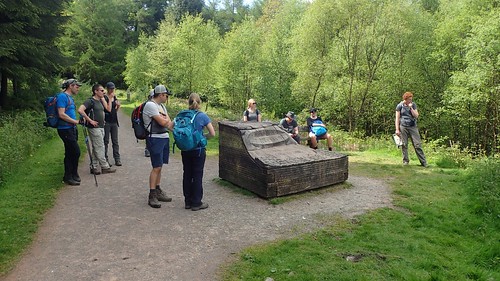 ‘A Slice of Neroche’ [non-edible] was an interesting feature that you don’t see very often at all. Detailing the layers that sit beneath this landscape. 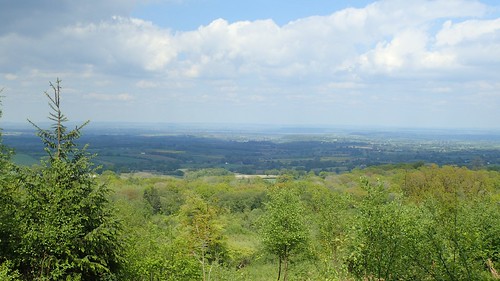 This, along with another viewpoint, made for a satisfying end to the day’s walk. Some opted to stop off at the local pub in Staple Fitzpaine, while I decided to head straight home in preparation for another early start at work the next morning.

Distance of this walk: 14 miles