In preparation for this ‘Week in the Peaks’, I’d drawn up a private shortlist of walks I might be interested in leading with our small group. From memory, I believe there were nine entries. Some of which I’d walked alone within my two previous trips to Derbyshire.

An opportunity to revisit Dovedale was on the cards – quite literally, a sub-ten mile route was among the AA Walks route cards in our possession. I wasn’t leading this one but I believe we extended the length a bit. 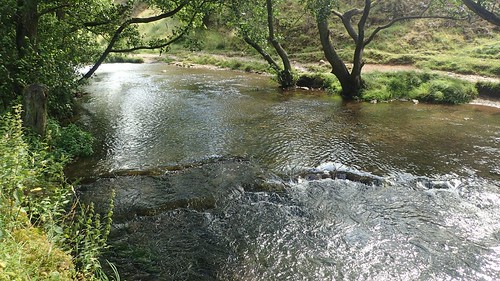 As you might expect, if you’ve ever been to the area, we chose the popular Dovedale car park as our own starting point. It costs only £3 to park there for the day and an attendant was on hand at the gate to take cash payment. Beyond his pockets, there’s space to park maybe a couple of hundred cars, along with a toilet block (30p a go) and a kiosk selling ice cream and cold drinks (during daylight hours). 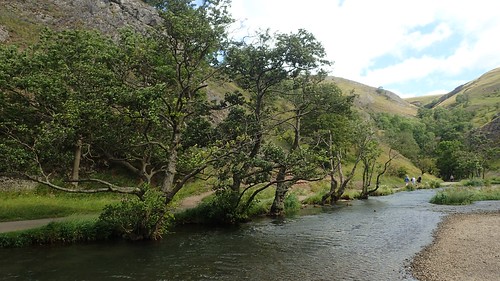 Dovedale is a stunningly beautiful location. It would be no surprise to find this place bustling, even over-crowded, with tourists on a sunny weekend. It was hardly quiet on this Monday morning, with the schools having broken up for the summer. 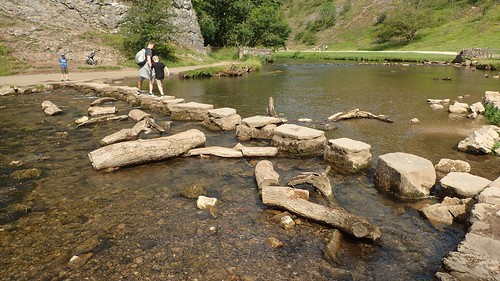 Stepping stones across the River Dove are perhaps one of the more iconic sights of this area. We didn’t cross them on this occasion but I did complete that brief journey myself, back in September 2015. 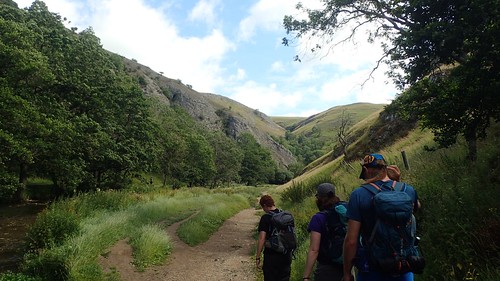 Following the river, all paths are bordered by steep-sided hills. One of those is Thorpe Cloud, which I’ll mention again towards the end. 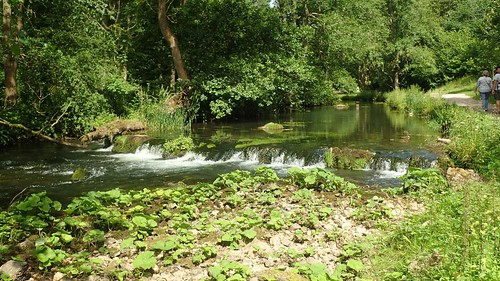 We followed this riverside path to the north, passing Lover’s Leap and in the direction of Wolfscote Dale, although we wouldn’t be walking as far. 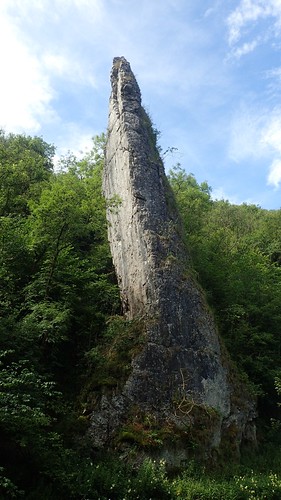 This is Ilam Rock. An impressive limestone pinnacle unlike anything else along this valley.

We were walking in the southern ‘White’ half of the Peak District, where limestone outshines the bleak and peaty moorland of the Dark north. 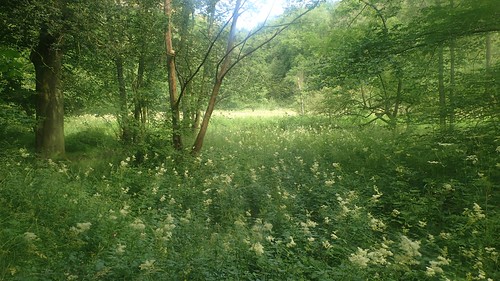 I remember dropping my camera on the stone path beyond here. It made enough of a ‘crash’ for others to turn around. But my camera still works fine to this day. Some images were a bit ‘blurry’ afterwards but this was soon wiped away. 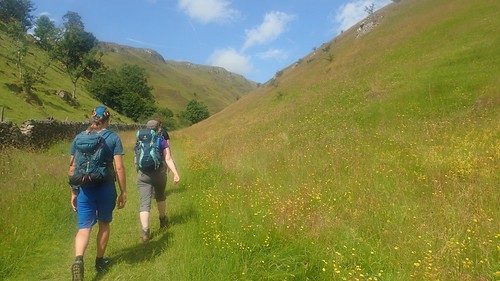 We then crossed the River Dove along a wooden footbridge. From the other side, I feared we’d be taking the steep stone steps to the top of Dovedale Wood… I came down this way on my own, back in 2015 and can recall how slippery those steps were after wet weather (the night before this, we’d witnessed thunder and lightning through the early hours).

Instead, we followed the mildly-inclining path up through Hall Dale… Just as I had done four years ago, following that aforementioned descent. 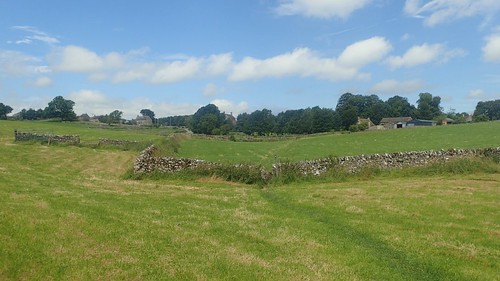 So far, this walk had been quite familiar to me but still something I could appreciate. I’d often thought about returning to Dovedale since that first visit but had no intention of seeing it again by myself.

From the top of Hall Dale and on the edge of Stanshope, we would make our way across farmland. 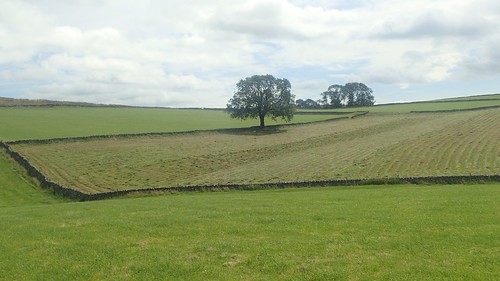 To Damgate and then Castern, soon to join the River Manifold en route to Ilam. 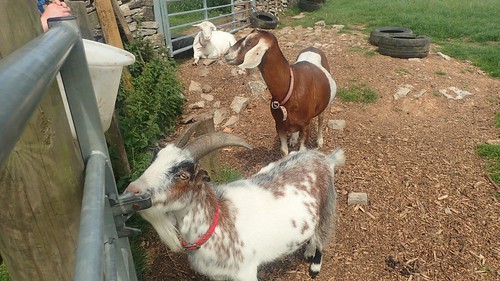 These goats were keen to follow us through the gate and out of the farm. Damgate Farm is an animal sanctuary, as well as a wedding venue. Beside one of the forthcoming roads, we’d find a shaded space to stop for lunch beneath a covering of trees. After a grey weekend, this was our first taste of hot weather in the Peak District for this trip. 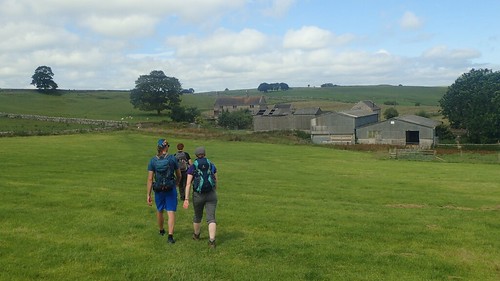 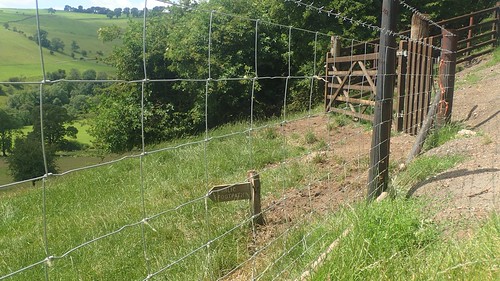 Ahead of reaching the River Manifold, we passed a signed honesty box asking for donations towards the preservation of what was apparently a “concessionary right of way” crossing the corner of someone’s garden…

I didn’t take any photos and I’m still unsure of what to make of it. A public right of way is just that… No landowner has a right to meddle with our intentions to follow it. Unless it’s a permissive route, which would contradict the OS Map, in this example. 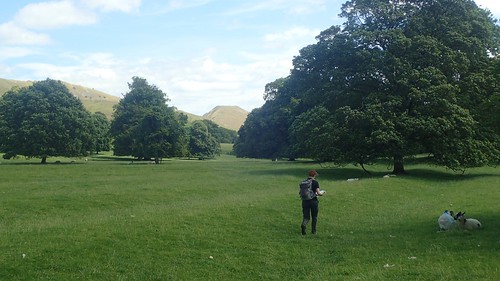 We passed the entrance to Ilam Park, where National Trust members could possibly park without paying a fee, before continuing our walk back in the direction of Dovedale.

Between the trees lies the flat-topped summit of Thorpe Cloud. In two visits to the area, I have not been up there. It is high on my list now, for a future visit, having seen the number of people heading up and down it from our own viewpoint. One accessible path to the top doesn’t feature on the OS Map and ascends from the car park-side of the hill. 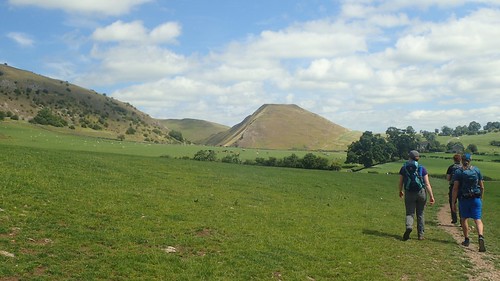 We did stop for a deserved ice cream at the end of this walk. I had thoughts about ditching the group to climb Thorpe Cloud, just so that I could now say that I’d done it… But that would’ve meant sacrificing ice cream. I’m sure I’ll be back in the Peak District again, two years from now. 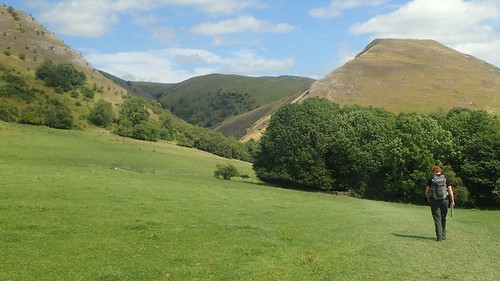 Our second walk of this trip and we still had four days of potential walking to follow.

Distance of this walk: 7 miles