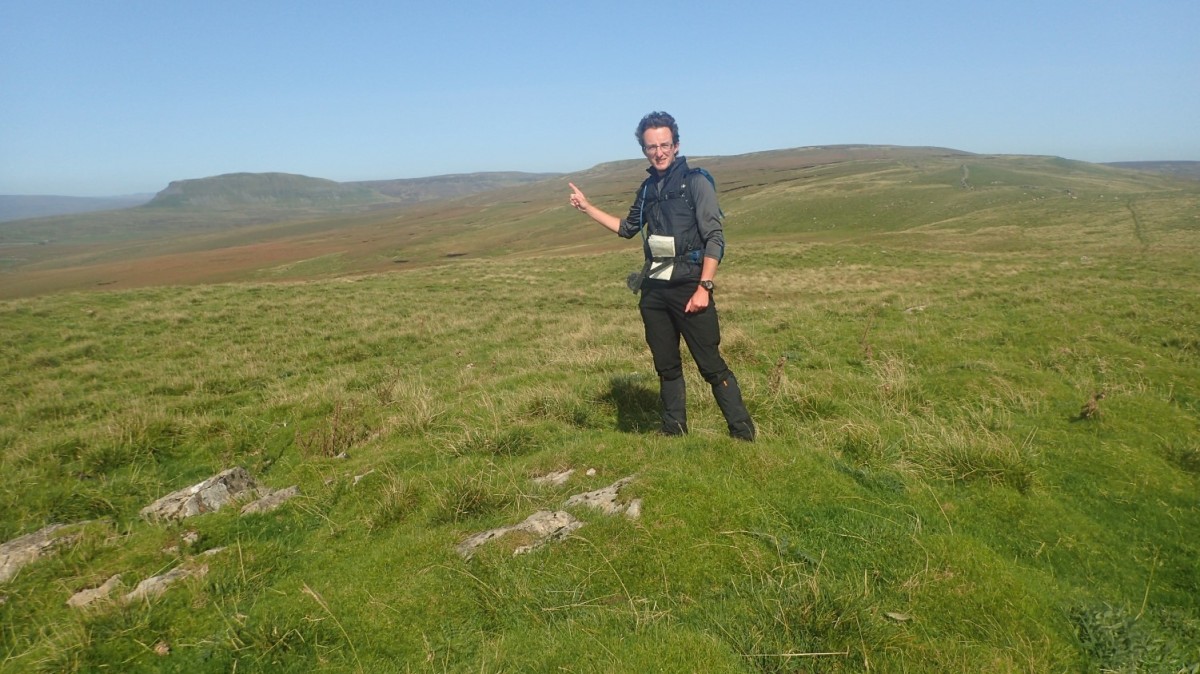 I struggle to believe that two whole months have now passed since this walk. I really thought I’d have it all written up by now.

This walk was one of my ‘less essential’ options (after the Three Peaks) and yet still inspired by a route from the Walking Englishman. I merely extended it to pay a brief visit to Malham Cove.

This walk starts from the main car park to the south of Malham Tarn. It is free to use the spaces here (although a donation is suggested – and I did deposit £2) but that may be because of the challenge in getting here… I had to follow Google Maps on my phone; I wasn’t confident that I could get there efficiently with only a map.

All I remember from that drive was the horrific uphill gradient and switchbacks, somewhere on the way from Horton-in-Ribblesdale. This was an early time of weekday and fortunately, very few other cars were about.

My walk began heading south towards Malham Cove and the town itself. Walking parallel to the Pennine Way but following a route marked as Trougate (I’m assuming ‘trou’ means ‘through’).

After a day in the cloud (clag) with “Inglebugger”, it was back to the blue sky and September sunshine that my week in Yorkshire had otherwise known. I soon joined the Dales High Way, head for the cliffs above the cove.

I could see a couple of people on the infamous “limestone pavement” that stands on top. My visit to this much-sought area would be fairly brief and I’d decided that I could pay it a proper visit (from below or inside the cove) on another visit. Perhaps even if I get around to walking the full Pennine Way!

I’m not a geologist so I can’t even begin to confidently understand how this was formed. But I have read that there would’ve once been a waterfall crashing down in to the cove below.

It would be a very long way down to the bottom! Moving on with my walk, I soon passed a sign from the Samaritans. I wouldn’t have otherwise thought of this as a suicide hotspot. Perhaps if I lived closer and knew it better, that could be different and more like how I see Cheddar Gorge.

My waterproof camera has a habit of fogging up in humid conditions, which is why you’ll notice some of these early photos were slightly blurry.

One day, I like to think I’ll make the climb up from Malham Cove. For now, I joined the Pennine Way from the top and followed it up past Raven Scar and Ing Scar.

Yorkshire was an incredible place. I was continually blown away with the scale of the landscapes and terrain here. Every day.

As soon as I had joined it, I was leaving the Pennine Way to head west along the Dales High Way and on past Langscar Gate, which had a few parking spaces available.

Ahead of me, I group of adults all kitted up had departed the car park and set off away from the paths and bridleways, on a course for what I presume was in aim of a Mined Cave (as marked on the map) and disused air shafts.

I find it interesting how more people up north tend to wear brightly coloured outdoors clothing, than those of us further south. I’m sure it’s to do with remaining visible and safe in these grand National Parks. Yet none of them turn up looking exactly the same!

For the next mile, I would now follow the Pennine Bridleway. Not to be confused with the Pennine Way.

For the first time in my Yorkshire trip, I was walking beside free-roaming cattle. None of whom were particularly interested in me. Even those dawdling along the path.

Before appreciating that distant view of Ingleborough, I had to negotiate one gate where a pair of cows were affectionately grooming each other; one either side of the door way… One was definitely a bull! If they didn’t look so “loved up”, I would’ve try to break things up and find my way through.

With an element of fortunate, there was a metal grill plugging a hole in the hedge a few metres away and I scrambled over that instead.

A bit further on and I’d then look to leave the bridleway and head slightly off-piste towards the road. A black dotted line on the map (not a true right of way) would guide up and around Black Hill, to rejoin the road near Capon Hall.

From memory, the Walking Englishman’s route follows this road all the way from Malham Tarn… That’s nearly two miles of tarmac, which obviously didn’t appeal to me, as direct as it might’ve been.

Walking north-west along the road to Henside, I would then turn north-eastward, heading uphill along a bridleway and passing a disused quarry.

I stopped for a cup of tea and a brief bite to eat at the next drystone wall, which offered ample shelter from the incoming wind.

On to the next field of Knowle Fell and I would again put my faith in to a black dashed line on the map… Which didn’t correspond to an awful lot on the ground, despite my initial optimism.

This meant relying on vague compass bearings; attempting to pace to various points, features and occasionally double-checking myself with GPS.

I was wet and boggy under foot in many places. Not quite the marsh of my Crag Hill walk but it turned the intensity up a notch. Far away now, I could see the majority of Malham Tarn.

There would be a trig point at the end of this. My legs were tiring quickly. Mind struggling to maintain concentration. I wasn’t going to be able see the trig just yet but a wooden post became my visual marker and, walking towards it, I wouldn’t be very far off course at all.

With Pen y Ghent now ahead of me, this was the trig point of Malham Moor. Far from any marked rights of way. I like to think that few people successfully get this far.

For the next hour (or so it felt), things were going to be simple from a navigational point of view. Pickup the drystone wall running north and follow it all the way to Fountains Fell, which is where I’d planned to stop for lunch.

Again, there was no bridleway along here. With hags of peat to my left, the going was often wet under my boots. Another physical test of endurance but with the underlying promise of ‘lunch at the end’.

There were two points where I needed to cross through these boundary walls and I didn’t get either one right first time.

Firstly. Where the wall turns sharply to the east, you have to cross through to the south of this new line (otherwise you’ll reached a dead-end on the north side). Then, where this rejoins the wall running north; cross over on the eastern side – I did find stepping stones in place for this one.

What I then found was a series of wooden posts, marking some form of route across the moor. Was it for the benefit of farmers? Cavers? A disused option for the Pennine Way?

This was Fountains Fell Tarn. With so much peat present, I didn’t dare try to edge any closer. I wonder how many have? It would never be as busy as Malham Tarn, that’s for sure. How many wild campers have attempted to refuel from this natural water source?

Further wooden posts led me up to these piles of stone – which would’ve marked the way before the post were installed. I used one as a comfortable-enough wind shelter during my lunch break.

Pen y Ghent was so close, I could almost reach over and stroke it. As I packed up to continue on, another man appeared from out of absolutely nowhere and marched on, eastward, to join the Pennine Way.

There was said to have been a Weather Station to the south of the tarn. But here, on the north side, I don’t know quite what this would’ve been. A shepherd’s hut? Shelter for the miners who would’ve worked excavated this land?

Approaching Fountains Fell from the Pennine Way, the National Trust have kindly put up signs, warning of the presence of open mine shafts. In some cases, work was under way to fence off these hazards.

Close to this gathering of cairns, the Pennine Way resumes and I would soon rejoin the National Trail; following it all the way back to Malham Tarn for the final couple of hours.

For the most part, this would entail heading downhill and along a surfaced path; walked by hundreds (if not thousands) of people every year. Somewhat the contrast to by morning’s walk.

Further on in the approach to the farm at Tennant Gill, I could hear an engine racing up to speed. But concealed behind a barn, it wasn’t a tractor or conventional farm vehicle… I could hear a turbine.

Then, it rose up; blades whipping through the air and off it went. For reasons unknown to me, a helicopter took off and left the farm! You can just about see it in the photo above – a tiny black dot to the right of centre in the blue sky.

There was no great challenge in following the Pennine Way back to Malham Tarn. It was quite pleasant in places.

You may not be able to tell from the OS Map but the route passing around Malham Tarn House is actually a road or private driveway.

Glimpses of the water through the trees, as I passed walkers who were clearly only here for the day. Or even, just the afternoon.

If you so wish, you could walk quite close to the eastern shore of Malham Tarn.

I found it interesting to note that even new and young trees are surrounded with drystone enclosures, to deter the wildlife-munchers like deer and livestock, I presume.

While up to my left stood the cliffs of Great Close Hill.

Another excellent day out in the Dales was about to come to an end. Suddenly, it was much busier and I’d soon find the car park had been overflowing, where I’d been only the second to arrive, hours earlier.

You can also see The Walking Englishman’s route.

2 thoughts on “Malham and Fountains Fell”