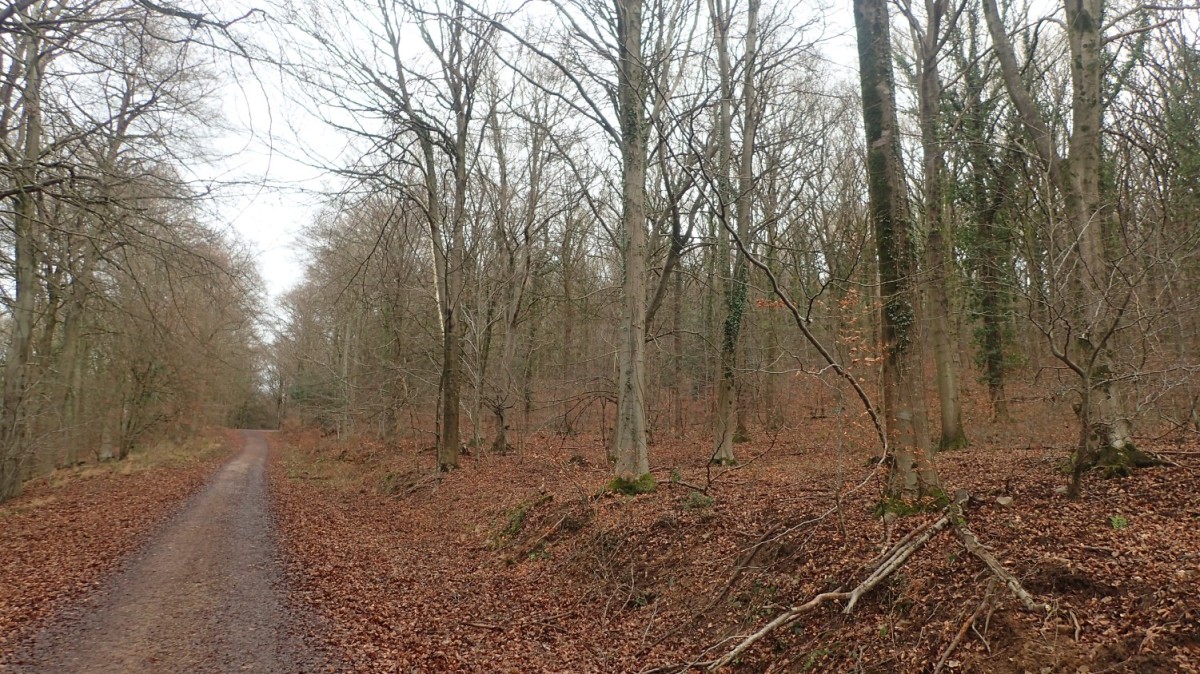 I’d only once previously been to the Forest of Dean and that was an enjoyable Go Ape experience, which I’d recommend to anyone. People often rave about the location but I’d never done a proper walk around it. Contrary to my previous believe, Wentwood sits outside of the boundary.

For the second time in 2022, I drove across the Severn Bridge and to a part of Gloucestershire not too far from the border with Wales.

As with the Wentwood walk, this was another route from the Walk West series of eBooks. I made my way to the Organ’s Green car park, as it’s named on the OS map and just north-west of Blakeney. I was the first car to arrive on this day and pleased to find the pay and display machine was out of order. Before I set off, two other cars had arrived. I’d read that this area can be very popular in the summer.

Crossing the road I’d driven along, I was following narrow, unmarked paths and tracks in to deeper woodland pastures.

Some of these tracks were easier to locate than others. For example, where Geoff write about a clearing beyond the trees in his words; look above and you’ll see that ‘clearing’ has been replaced by new-growth in the years since. Yet the narrow path remains, just off to the right and otherwise, as described.

I was using OS Maps at the time and soon found that I would be meeting and joining a marked public right of way. A footpath, in fact. Confidence! With a sense that this way would lead me to a discernible point. Getting lost in the woods seemed unlikely.

I soon found myself following a long run of power lines through this valley. A hundred years ago, perhaps, they would not have been present.

I did eventually emerge beside and then cross a road at Oldcroft, as the walk led me over this unique stile and down a field.

A little further on and I would be following the Dean Road; an ancient way running for ten miles between Lydney and Mitcheldean. Some say it may have Roman origins.

There was a chance of rain falling on this day and I remember setting out with full waterproofs in tow. Waiting. Anticipating. For the morning though, things seemed to be dry enough and I was expecting to finish this walk before mid-afternoon.

My walk continued in to Lydney, briefly, before diving back in to another path of woodland near Primrose Hill.

Out the other side and across the B4234, I would walk past the Dean Forest Railway at Norchard Station. It appeared to be closed to the public at this time and so, I continued walking.

Across the road and I was now walking through the Lydney Park estate, as I followed a bridge over the River Lyd.

I walked beside the railway track (again, silent, on this day) and soon passing forgotten stone buildings and structures that possible date back four-hundred years.

From the site of an old forge, I crossed the B-road once more and then up in to the woods again.

With native trees all around, it’s said that this is how much of England once looked, hundreds of years ago. Minus the man-made surfaces, of course.

I left the woods at this gate and crossed a recreation ground on my way to the village of Pillowell. I stopped further along in this field for a sit down and something to eat.

I struggled to find my way from here on. I turned off along one path beside houses, as instructed. But this way soon petered down towards a dead-end – possibly interrupted by overgrown vegetation. I had spied another potential route up to my right and through the trees… But there was no right of way and I hadn’t realised it was Open Access Land.

Instead, I walked a bit further in to the village, down another road and rejoined the intended route around Phipps Bottom.

Soon finding my way again, I was walking along a disused railway line that would guide me most of the way along to the next road.

Dog walkers explored the valley floor beneath me, while I held on to my height along this bank.

But further trees would prevent me from wading on along this boggy combe.

I forged a random but beautiful walk on through the trees. No definitive path or route; just my direction. Huge specimens standing all around.

From the next park, I began a slippery climb up in the vague direction of Bailey Hill.

I ended up on the wrong side of the lodge to where I should’ve been walking. But it was easy to see how I could carry on and return to my course.

Had I not wandered out this way, I would’ve missed these Highland cows.

I was nearing the end of my walk now as rain began to fall and quite persistently. Apparently, there’s a good view of the Severn Vale from this point… I was also hoping to find somewhere to stop for lunch. But with no real shelter overhead, it seemed inevitable that I would be eating in my car.

Then there was an off-piste section of walking down through the woods… I couldn’t find much to match Geoff’s words here and so, just walked on down towards a point in the correct direction. Watching out for tree stumps with each step.

Another muddy woodland path and walking beside old fence posts would lead me on to the final road crossing.

I met another section of the old Roman Road on the otherside of the bridge, before making my way up on top and following the raised path back towards the car park. Rain still falling.

I can find it hard to know where to walk, what to aim for and how to plot a route, when exploring a new area of forest. I’m sure I’ll feel the same whenever I do get to the New Forest! So, I’m grateful for written guides and recommended routes from others.